The start of 2020 was set to be great, with fantastic tides and a group of guests who had been planning their trip to Astove for over a year. Most of the guests had fished a fair deal around the world but none had fished for the mighty GT.

On arrival all the gear was set up and guests were given tips on what to do and what to expect during the week of fishing.

Day one on Astove started with spring tides peaking at over two metres, most of the guests fished the lagoon in the morning with great success for GTs and permit. David Moeller the veteran of the group showed his experience landing one GT in the morning and followed by another two in the afternoon. Whilst the permit got the better of the group, they were happy to have seen fish and had a few shots.

Timothy Johnston was the least experienced of the group having fished a few times for bass so naturally he was excited for his first day. After a little training his casting was improved, and he showed off his natural talent by raking up five different species on the first day. After spending the first day catching species and numbers Timothy was very driven to bank his first GT. By the end of day two, he had broken that barrier and had landed three beautiful GTs.

As the week progressed and the nerves settled down the fish numbers and species count increased, spirit of the group was high and everyone was having fun. As is often the way, by the latter half of the week the guests became more specific to certain species, all wanting to target their special fish. The trip was rounded off  One afternoon stood out with Lowry Mays achieving a Flats Slam with a GT, giant triggerfish and a fantastic five pound bonefish

Total Catch Stats For 6 Anglers For The Week 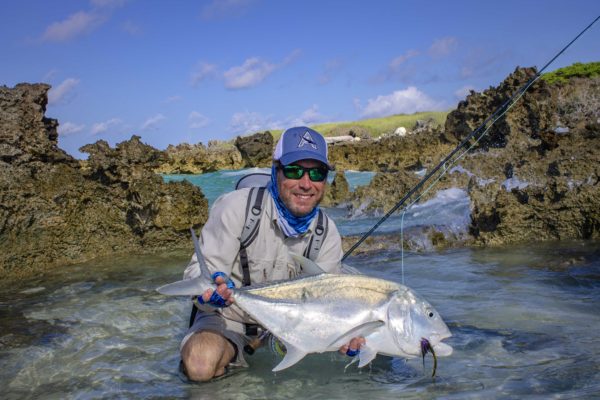