I would not consider myself a hunter of big fish, equally happy chasing 6 inch wild brown trout at home as I am waving a fly rod for any other exotic species. I do however have one exception, and that is a desire to catch a large Norwegian Atlantic salmon. My reasoning is not to have a fish to show off with (although I am sure there would be one or two photos…) but it is to be able to experience the fish that my grandfather admired so greatly. It is this reason that had a group of friends and me heading to Winsnes Lodge on the Gaula in early August. 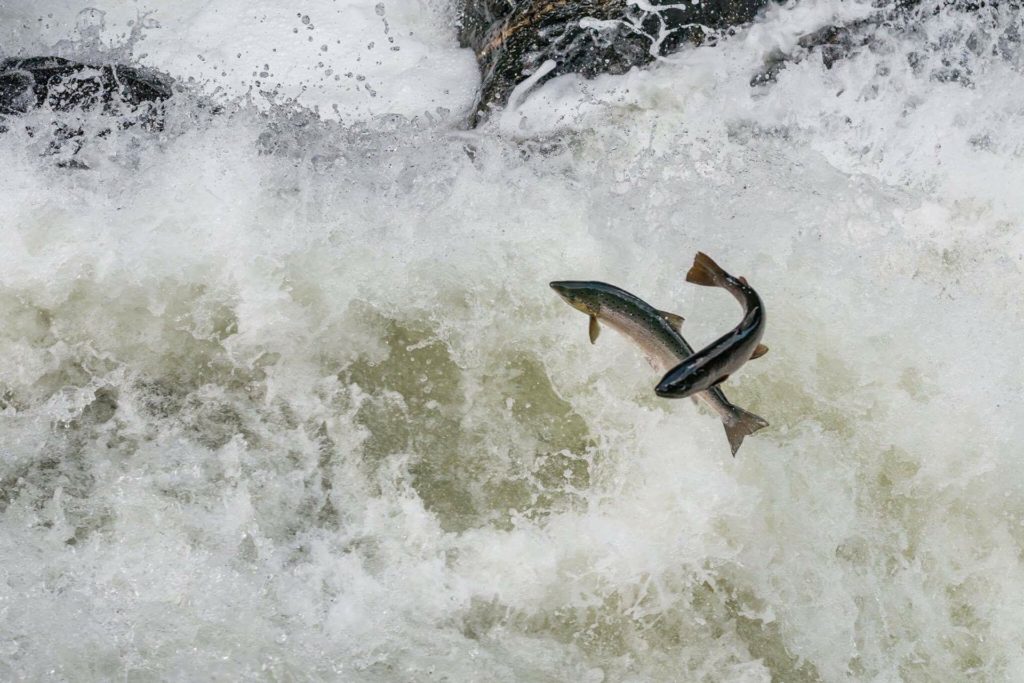 My fascination, and frustration, with salmon is still relatively new. I struggle to get my head around a fish where luck plays as important a role as does skill, and yet I find the chase thrilling. 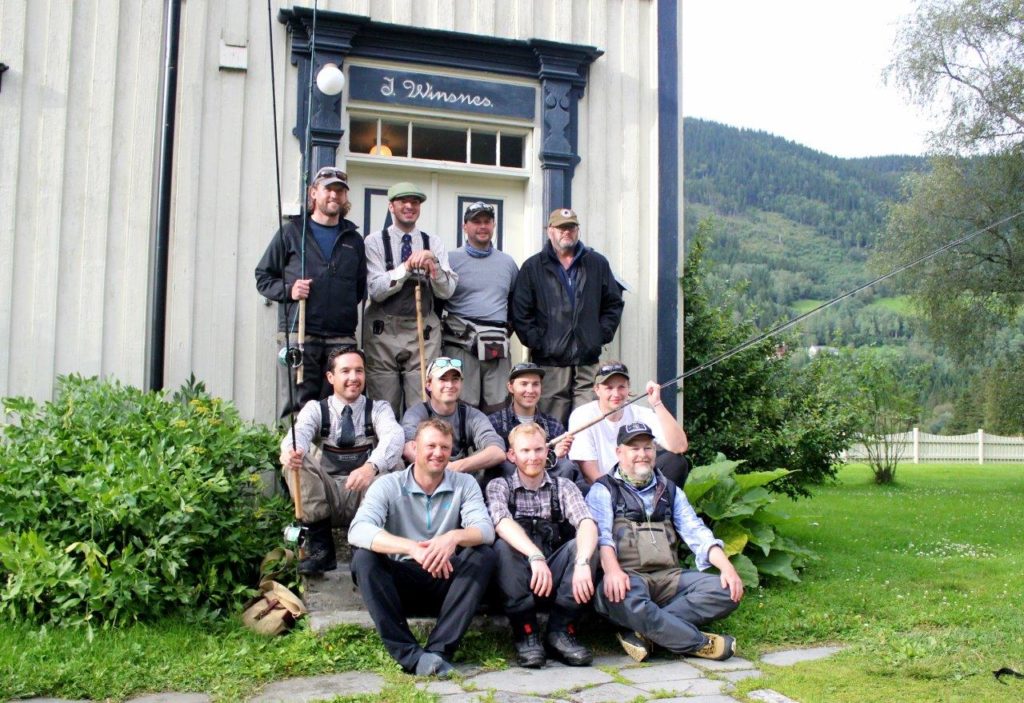 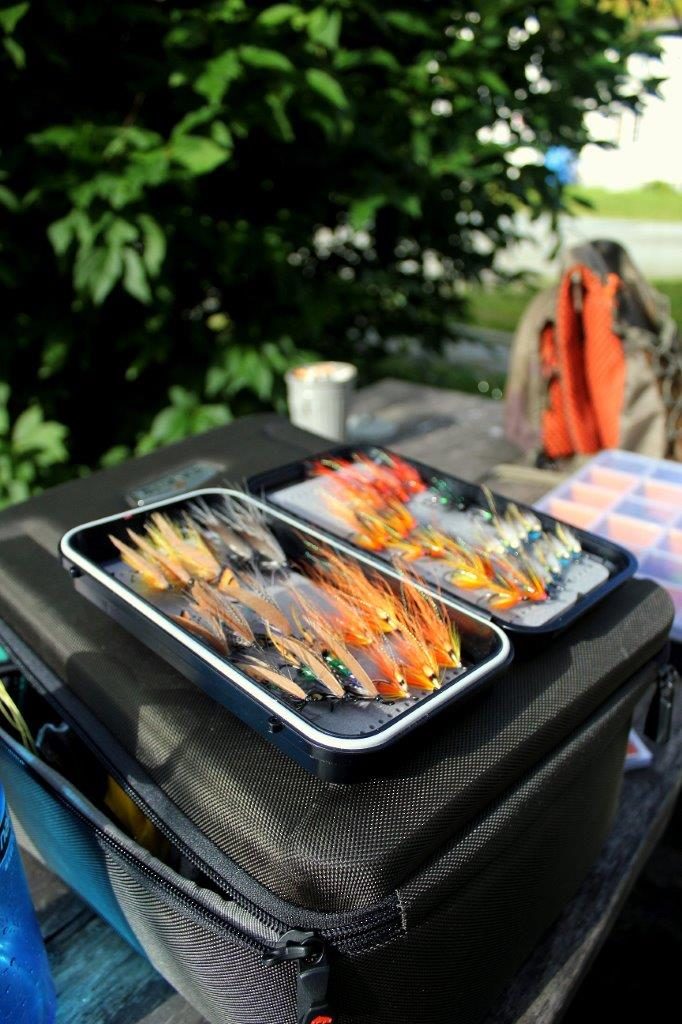 August at Winsnes Lodge on the Gaula is not considered prime time for salmon fly fishing, but it offers a nice balance between cost and a guarantee that you will see fish. It is a time of year that often requires an angler to try different things and to think outside of the box. 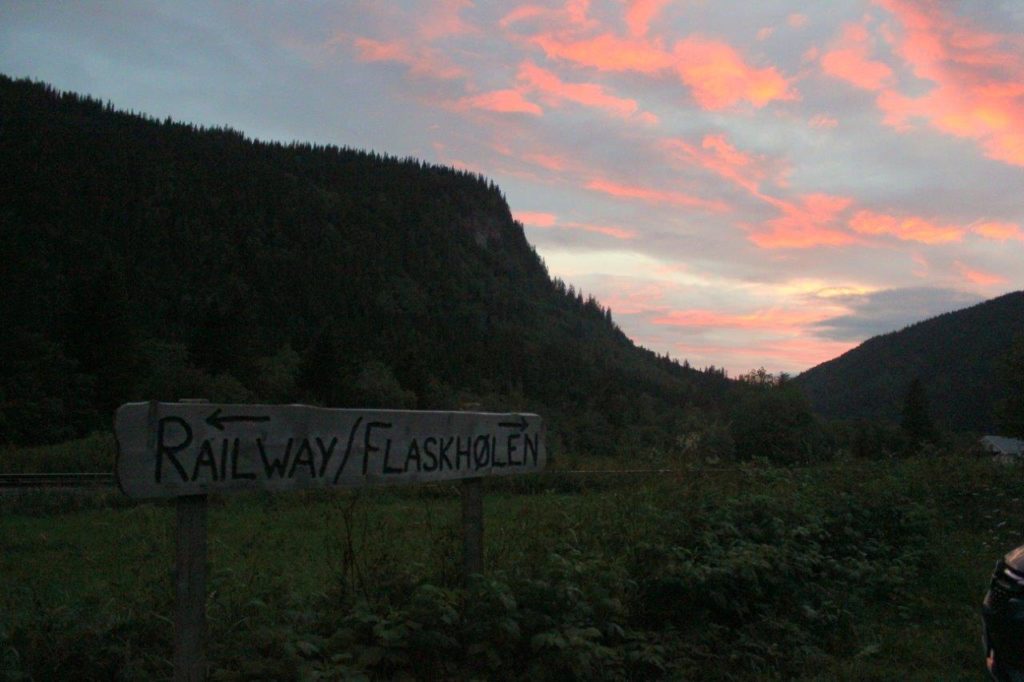 Having taken the late direct flight to Trondheim from London Gatwick, the group and I sorted out our hire cars and drove through the half light of the late summer night to Winsnes Lodge. After a couple of unintended detours we eventually arrived and were warmly greeted by head guide George Howard and Phoebe Richards, who makes everything run so smoothly.

That evening, over a relatively reasonably priced pint of beer for Norway, George explained the house and meal plans. There was a definite eagerness to get fishing but first we needed some sleep with an aim to be on the water at 0600 the following morning. 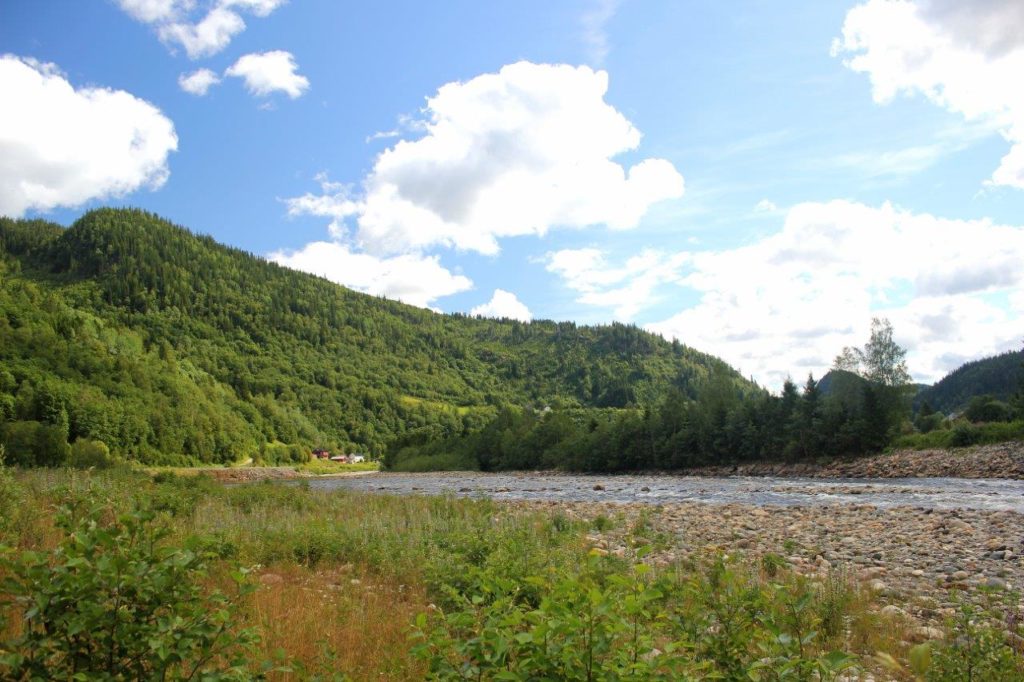 The river conditions were not at their best, high water had plagued the early weeks but then a sustained dry period had left the Gaula River very low. This said, there were fish there and a group of keen anglers ready to target their first Norwegian salmon. 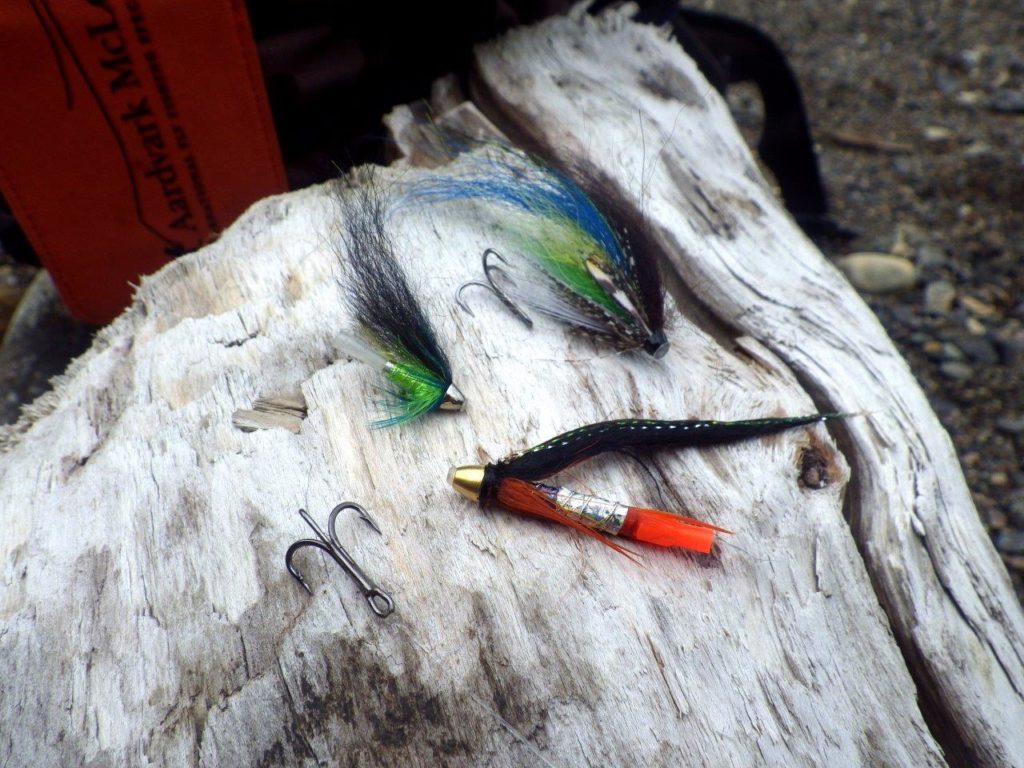 Morning came round quickly and we were soon out in the courtyard, taping rod joints, tying leaders and mounting rod racks. It was now time to head to our respective beats for the first session. The beat rotation at Winsnes works nicely, it is not the stressful 24 hour rotation of other parts of the Gaula but a split rotation over 16 hours a day. The 4 ½ Km of double bank fishing at the lodge is split into seven beats. Each pair of anglers has a beat for 4 hours before moving onto the next one. Due to the number of beats and the designated rest periods this means that for most of the fishing you will be moving on to a well-rested pool each session. Since the lodge moved to this system they saw their catch returns go up. 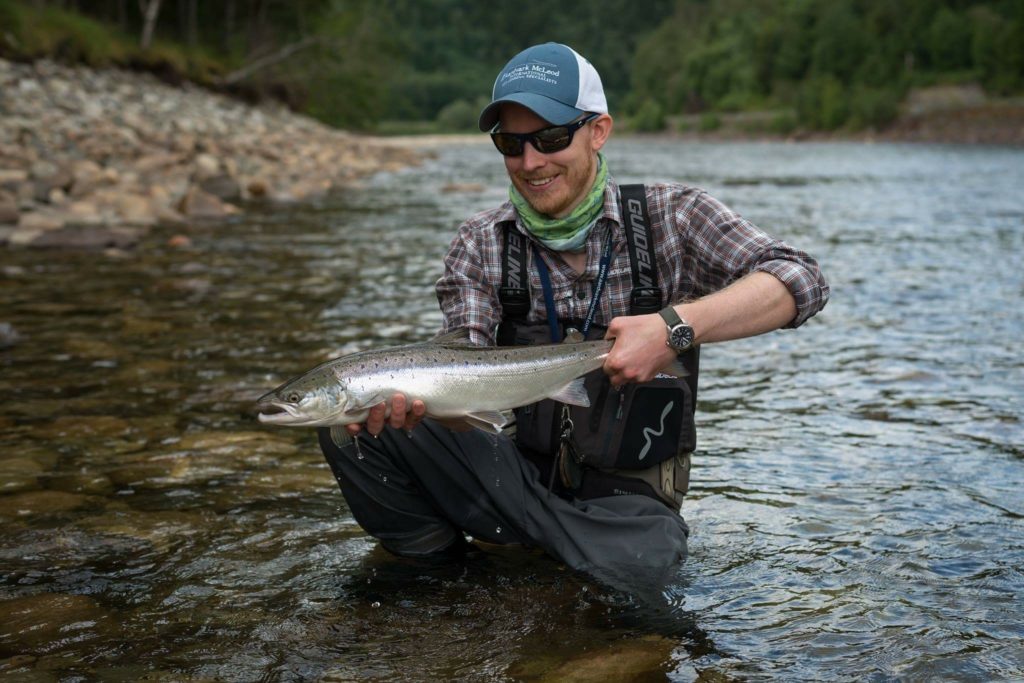 On my first run down the pool, I started right at the neck following my partner down. At first the fly swung nicely in the streamy water but as the pool began to open out I felt the fly needed to be worked. A small Blue Charm conehead fish on a 14 foot 23 lbs fluorocarbon leader. Tweaking the fly through the water I felt a small knock on the fly, the type that could easily be shrugged off as a small trout or parr but I sensed otherwise. Placing the cast slightly squarer the fly now swung quicker through the water. Sure enough, the line drew tight. Heart rate increasing… I waited before lifting into a definite fish. It was clearly not my Norwegian leviathan but it was a nice feeling to feel the pull of a bright silver grilse. Always a nice feeling to get a fish to hand early. 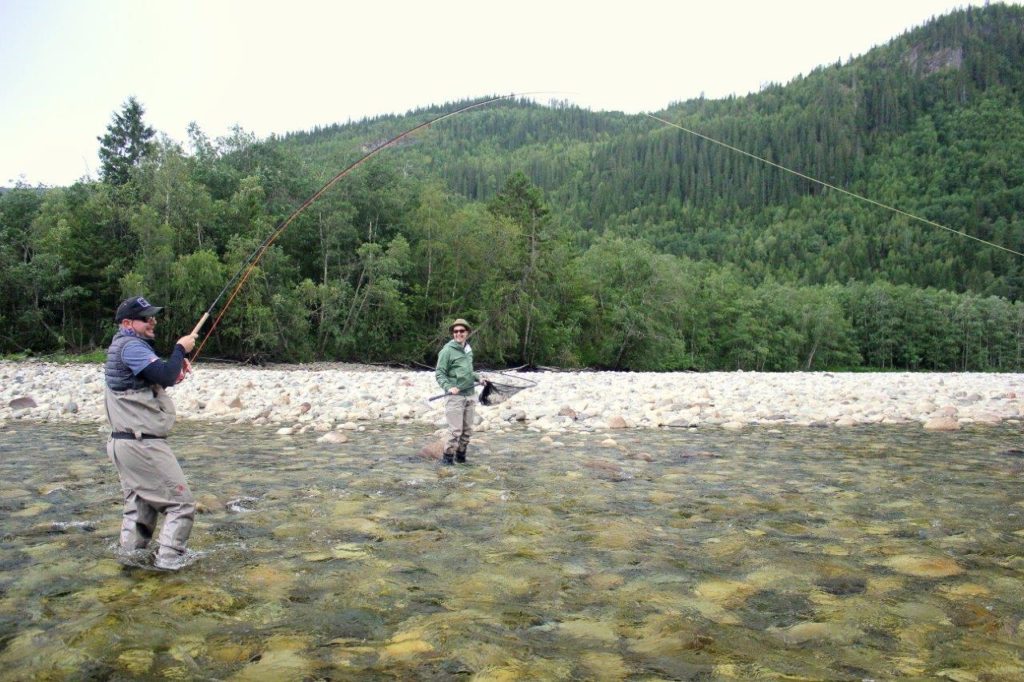 Later that morning, Adam also landed a nice grilse on a small green tube fly. It was a good start and as we returned for lunch we were eager to hear how the other rods had faired. Reports were mixed but there had only been a couple of other knocks. Everybody had seen fish so confidence was relatively high. 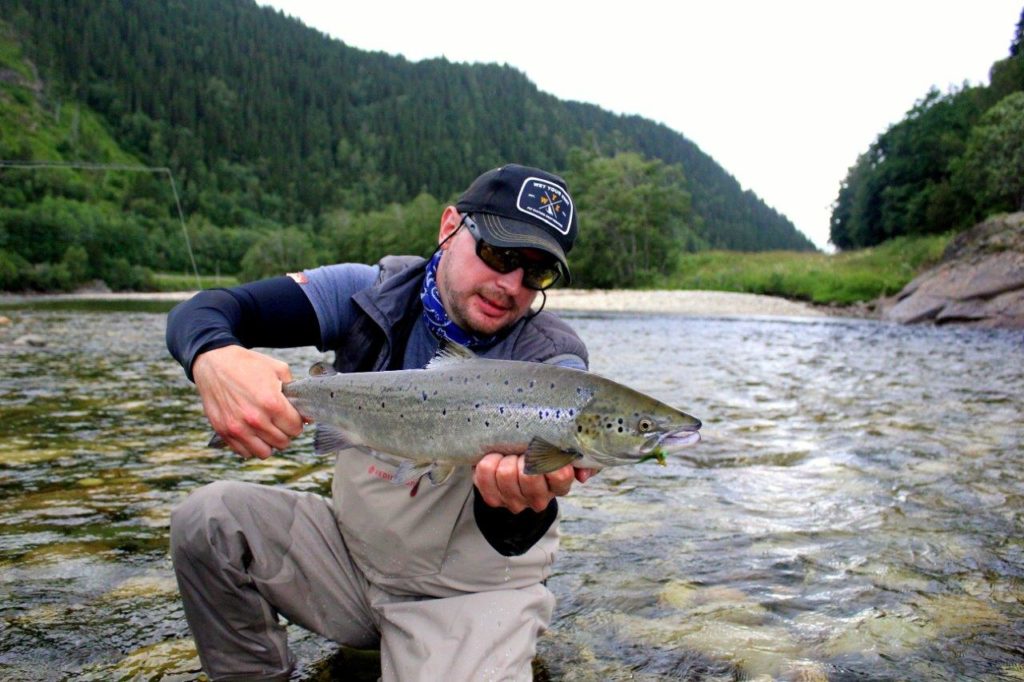 During the Winsnes lunch break we decided to head up to the impressive Eggafoss waterfall, about another 40 km upstream from the lodge. The falls has created a huge plunge pool that is home to dozens of salmon at this point in the season. They back up in the pool waiting for the correct water height and light in order to continue their journey upstream. The falls is a natural barrier for some salmon as only the largest and healthiest of fish can make it past them. As the clouds cleared and the sun caught the pool a huge shoal of salmon backs became visible. There were fish of all sizes there but from time to time you could catch glimpses of true giants, the type you wouldn’t even want to guess at their size. Buoyed by the sheer sight of many big fish we hurried back for our afternoon fishing sessions. 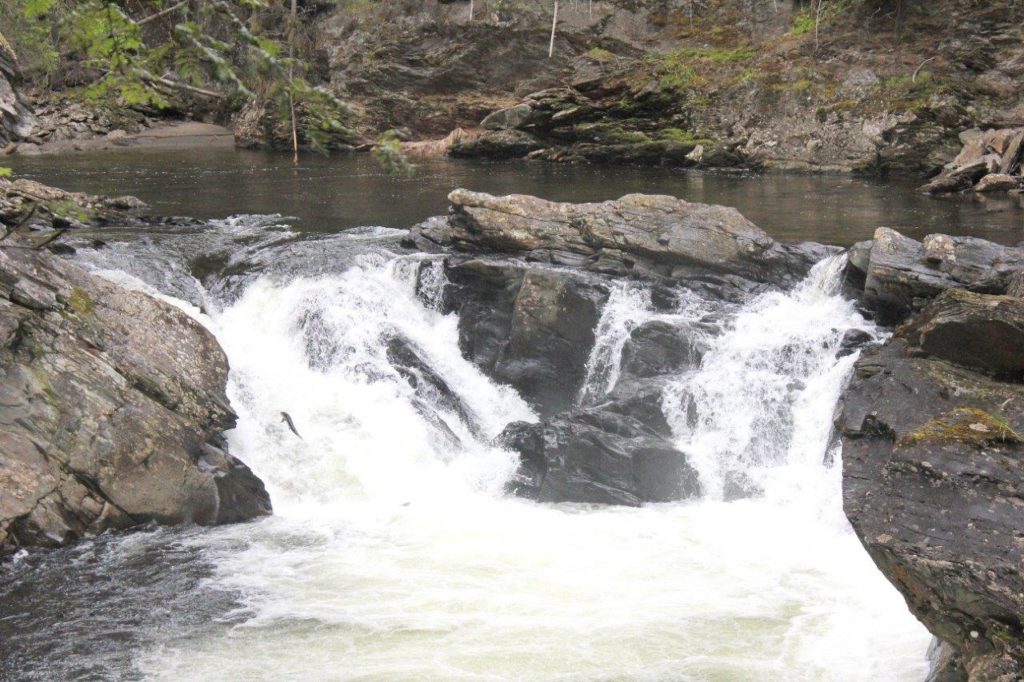 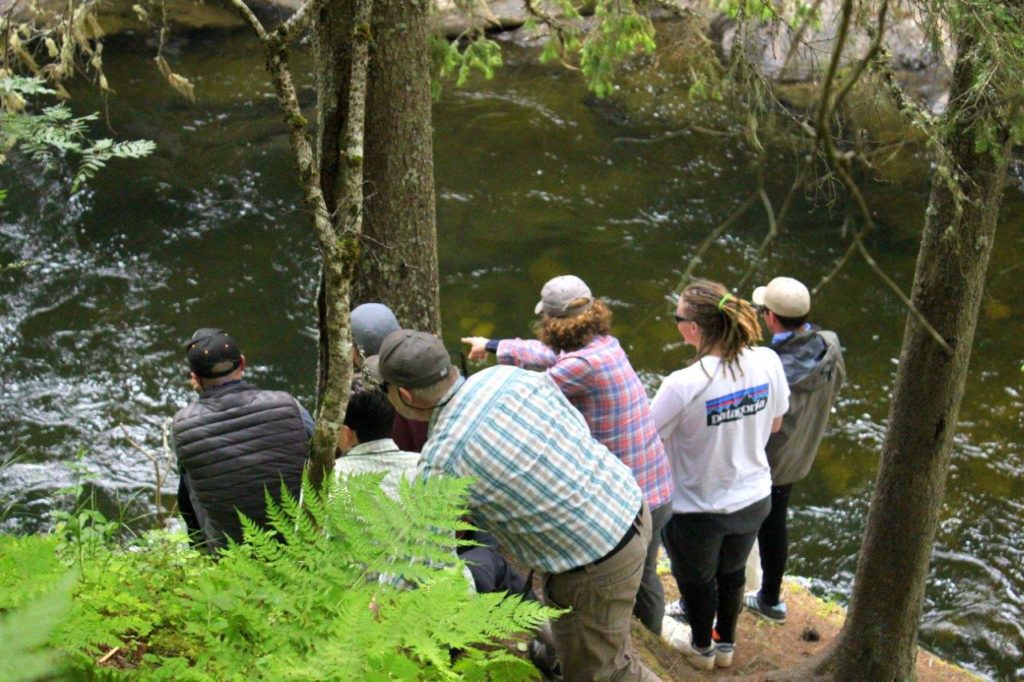 Over the course of the next few days we fished hard and got to know the pools and the holding spots for the water height. Generally in the low flows the fish were holding in the faster pocket water offering more oxygen. This made for some more interesting fishing with short sharp casts. In the main pools themselves we were picking up takes but they were often hesitant and non-committal. Another couple of grilse had been landed by the group and several bigger fish had been lost once hooked – an issue when the takes are lacking aggression. 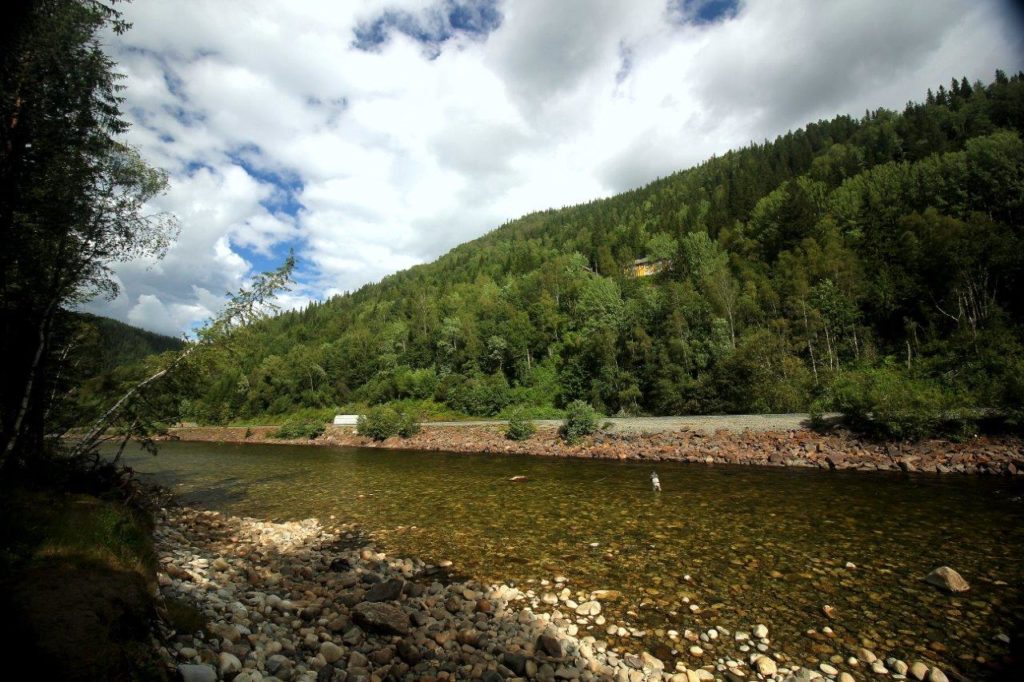 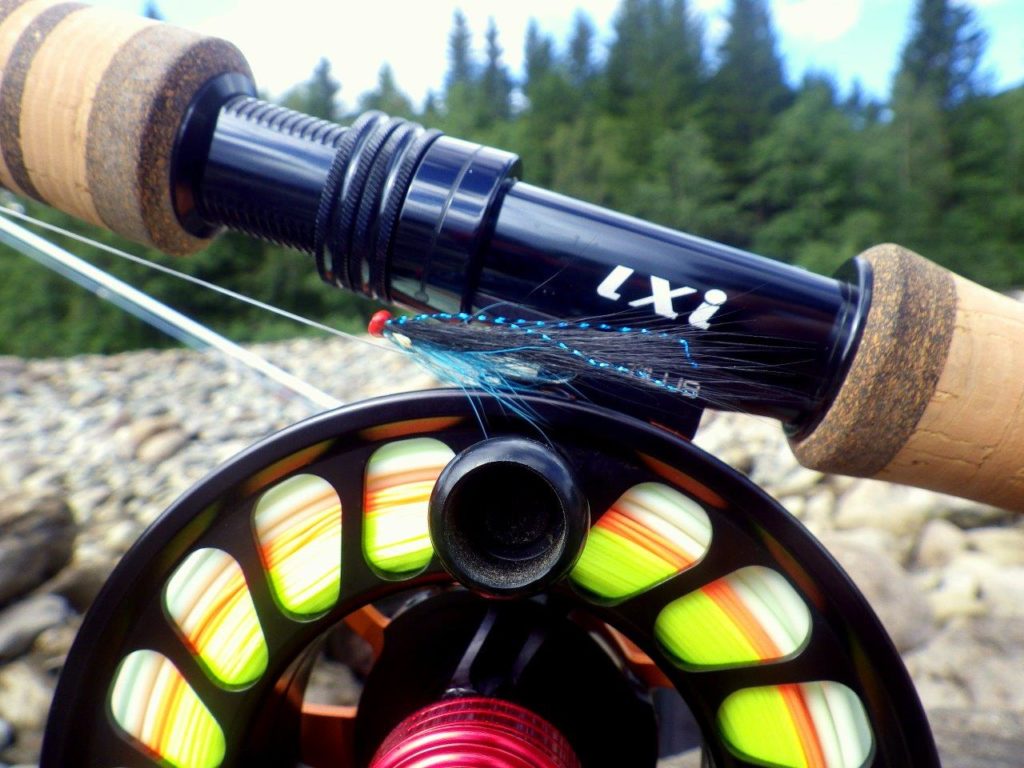 Looking to find further success, one or two of us switched tactics from the conventional small flies and tubes and decided to try hitching small plastic tubes (see Alex’s short video on fishing a hitch tube HERE). The method proved to be an almost instant success, the flies skating across the surface seemed to agitate to salmon. Several fish were risen in one session, including some bigger fish between 15-20 lbs, but two were lost and one small grilse were landed. It is one of the perils of fishing the hitch, you do not always get the best hook up when the fish takes. 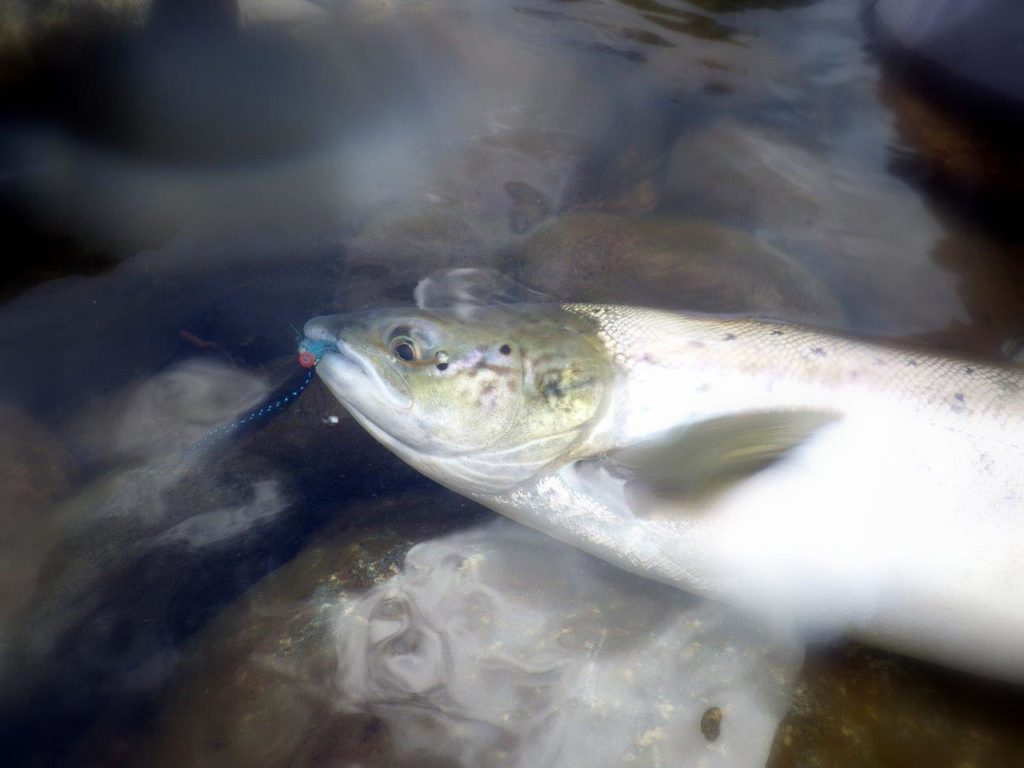 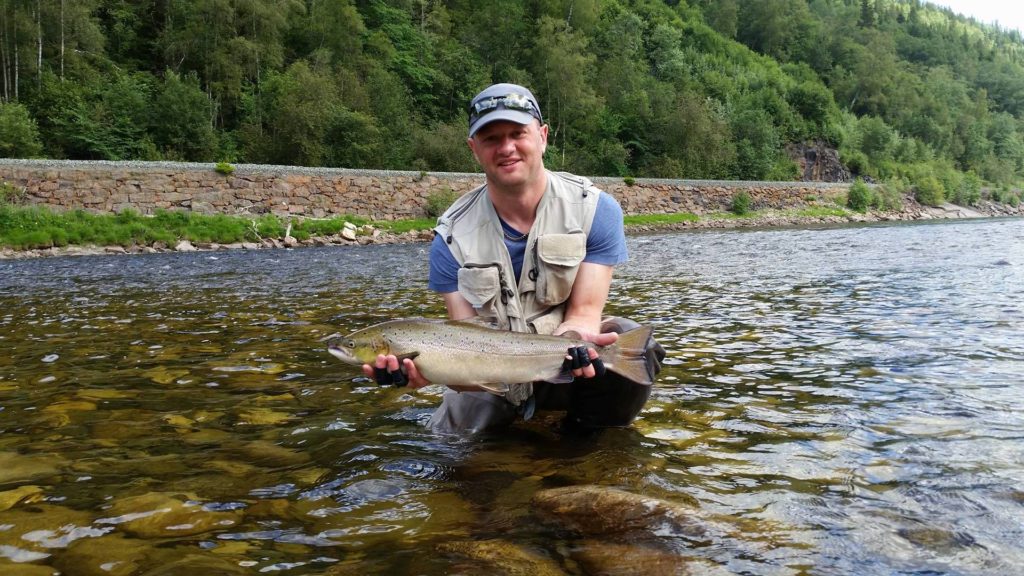 By the middle of the week, we were yet to see a big fish on the bank but that was about to end. The first was to come to Rob. Having had just a few takes and a couple ‘on-offs’ Rob was still looking for that first Norwegian salmon. Starting at the very top of Oksøy, he fished the white water meticulously landed the fly near the bank and letting swing out into the current. As the white water tailed out there was one large boulder that protruded from the bank, it looked an obvious holding spot but we were yet to touch a fish there. 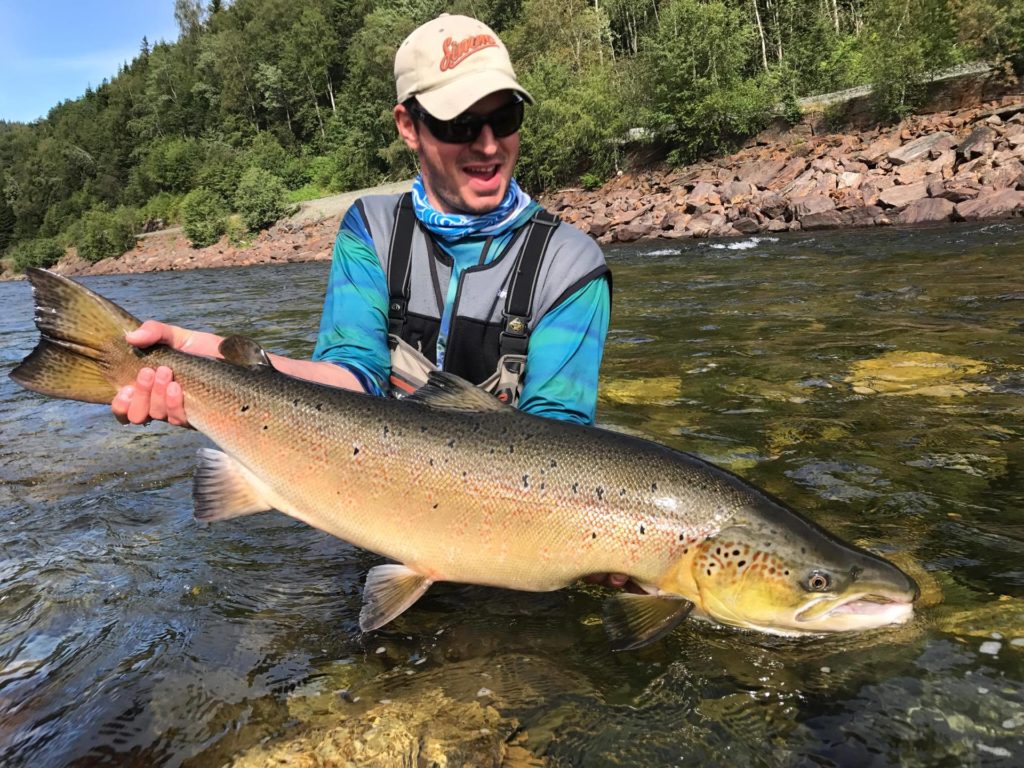 Placing the small black and green conehead with pin point accuracy, it barely swung before drawing to a stop. A long pause before lifting, it was clear to see this was no grilse. The big sweeping headshake juddered the rod before the reel began to sing. The fish was powerful and grumpy. With expert control, Rob handled both fish and nerves to play the fish out before sliding it over the net. Typical for the time of year, the fish showed the signs of being in the river for a while. Estimated at 24 lbs, it was great to land our first big salmon. 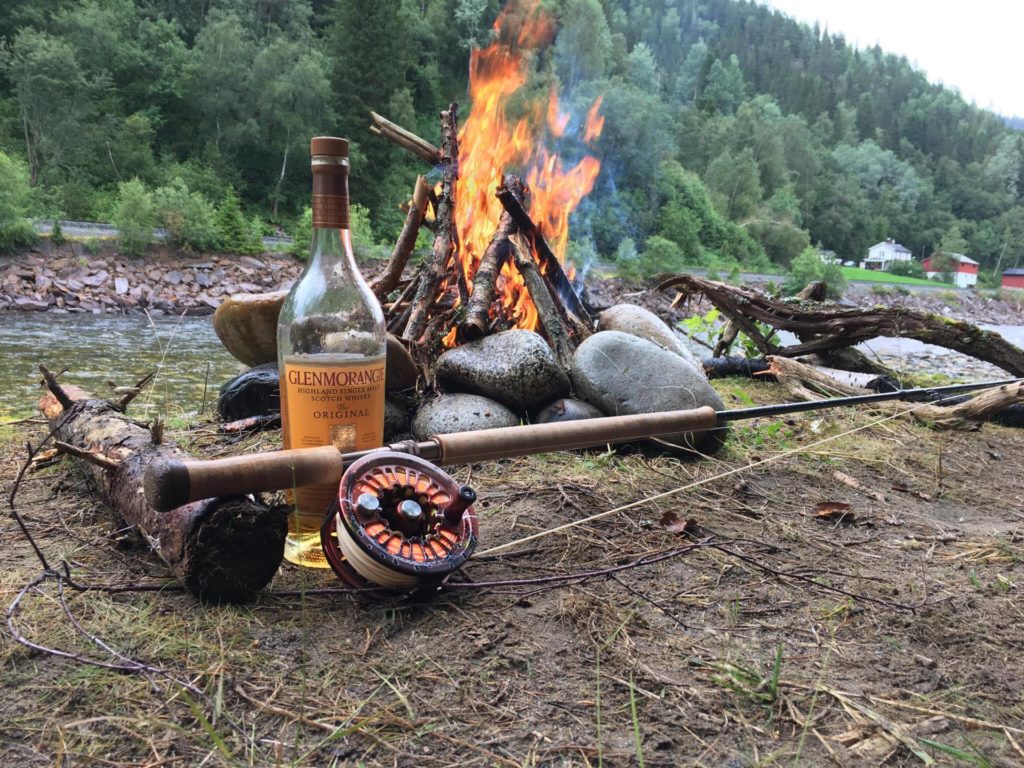 That evening, before we had a celebratory drink by the river, we fished the half-light session with great purpose. There was a belief that the salmon would be more active as the light changed. The group did get more takes, but rather than salmon it was in fact sea trout that began to make an appearance. This certainly added excitement to a good day. 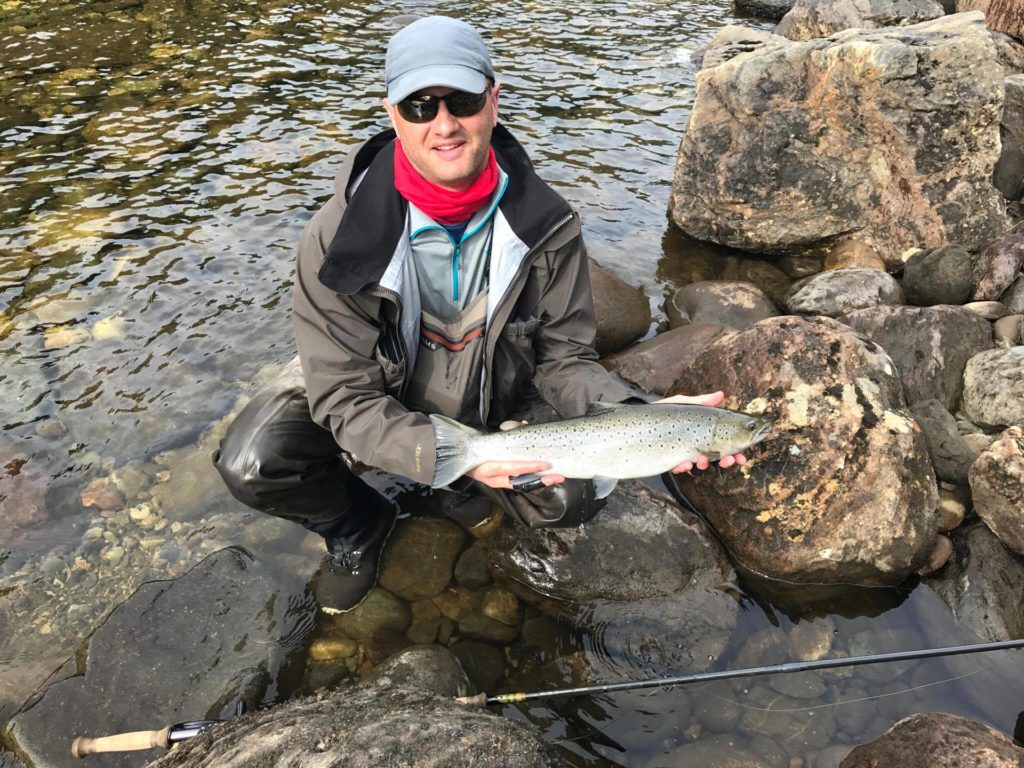 Some very welcome midweek rain brought a very slight rise to river, and whilst not much the effects was immediately evident. Salmon had clearly got a taste of this and could be seen running through the pools. Tim and Rob had gone for a change of approach for the day, ditching the modern technical clothing for the more traditional brushed cotton shirts, sporting ties and tweed caps. Whilst they bore the brunt of most jokes that morning, they soon silenced their critics. 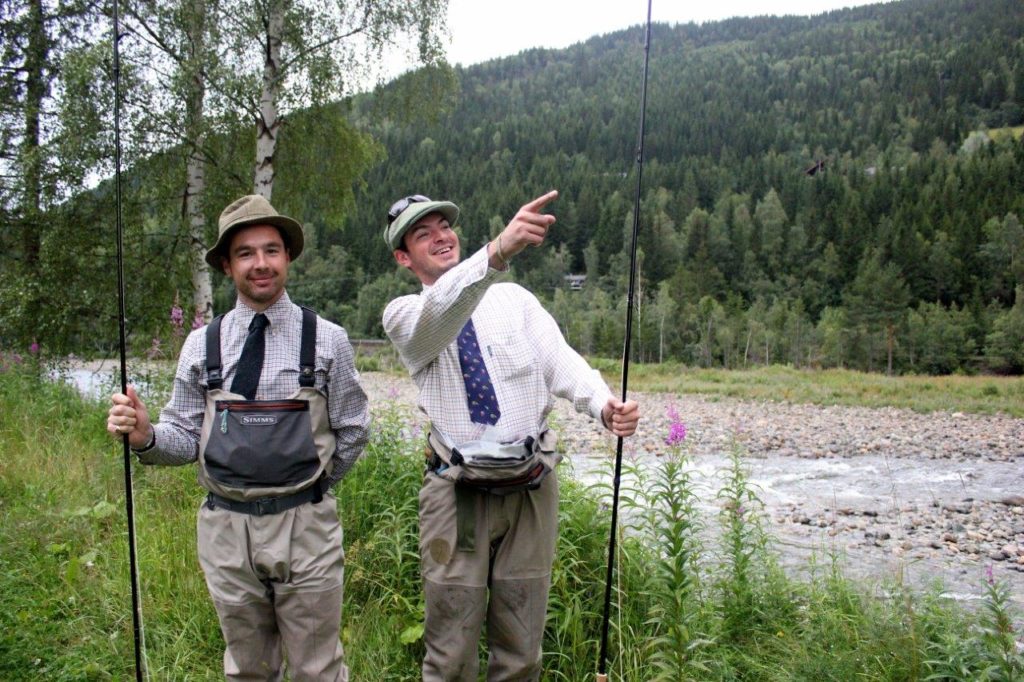 This time it was Tim’s chance, fishing through the exact pool where Rob had found his success, Tim’s line also drew tight in almost the exact same spot. Again, the heavy weight was a sign that this was another big fish. In an attempt to remain calm, Tim was telling himself and Rob that it was only a grilse as the fish hung deep. The steady tug-o-war played on, with neither angler nor fish clearly on top. Eventually Tim, with Rob’s guidance, brought the fish to hand. This time even bigger… Tim had found a true Gaula monster. Based on the measurements taken the fish was estimated between 30-34 lbs, not bad for Tim’s second salmon ever! 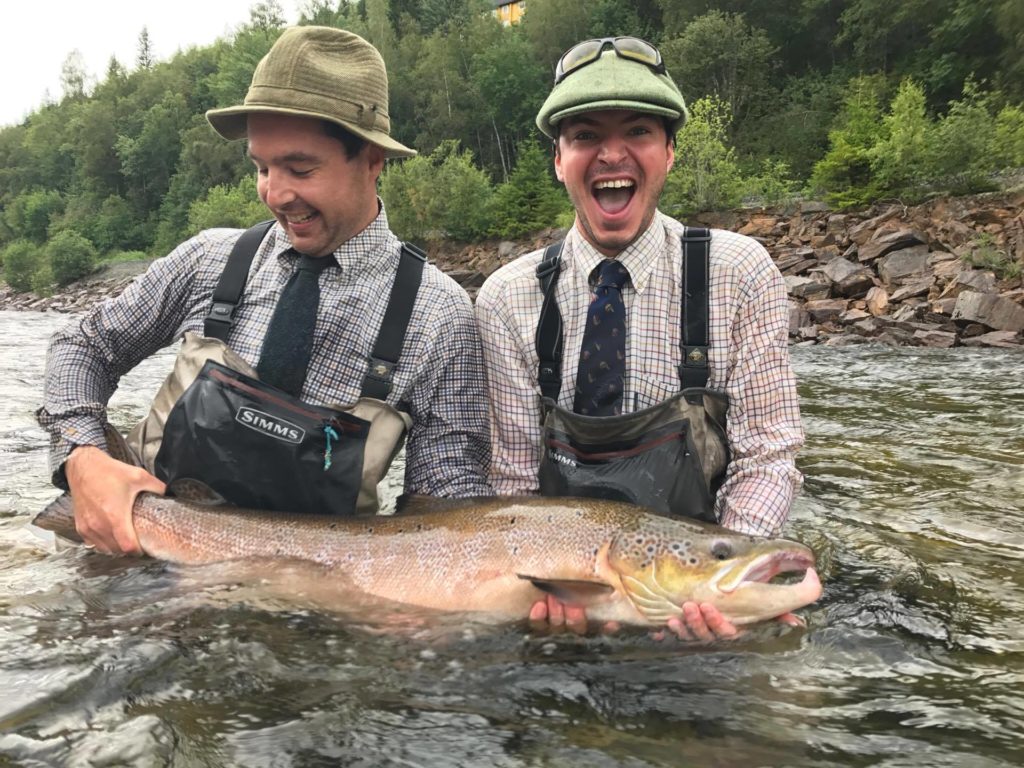 The week drew to a close in much the same vein that it began, plenty of takes, a few lost, a broken hook and a fine brace of grilse for father and son duo Nick and Fred. All in all we landed 12 grilse, 2 salmon and a few sea trout in the week, as ever there were lost fish and the talk of what could have been… We had had an amazing week, Matt Hayes, his wife Anne Marit, George, Phoebe and the whole team at the lodge had looked after us superbly. 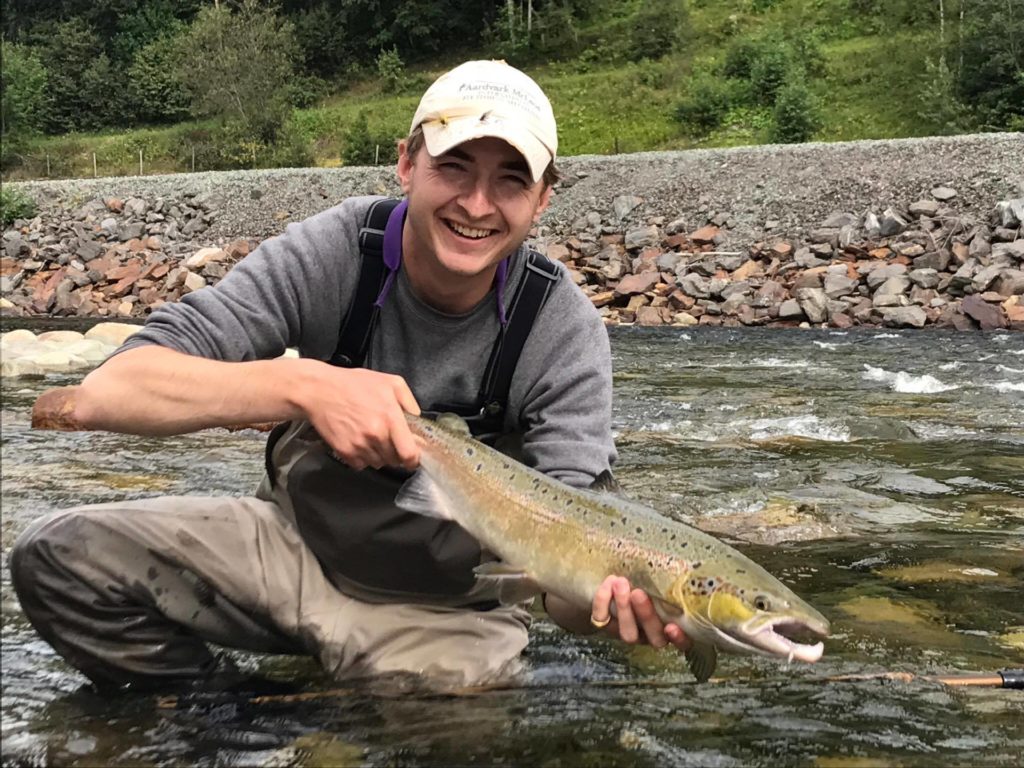 All that was left was the final celebration, a fantastic barbecue style dinner down on the home pool Krøken washed down with wine, beer and whiskey. There were a few saw heads in the morning, and that hollow feeling when you realise that you have to say goodbye but we left with a promise to return to land the fish that got away… 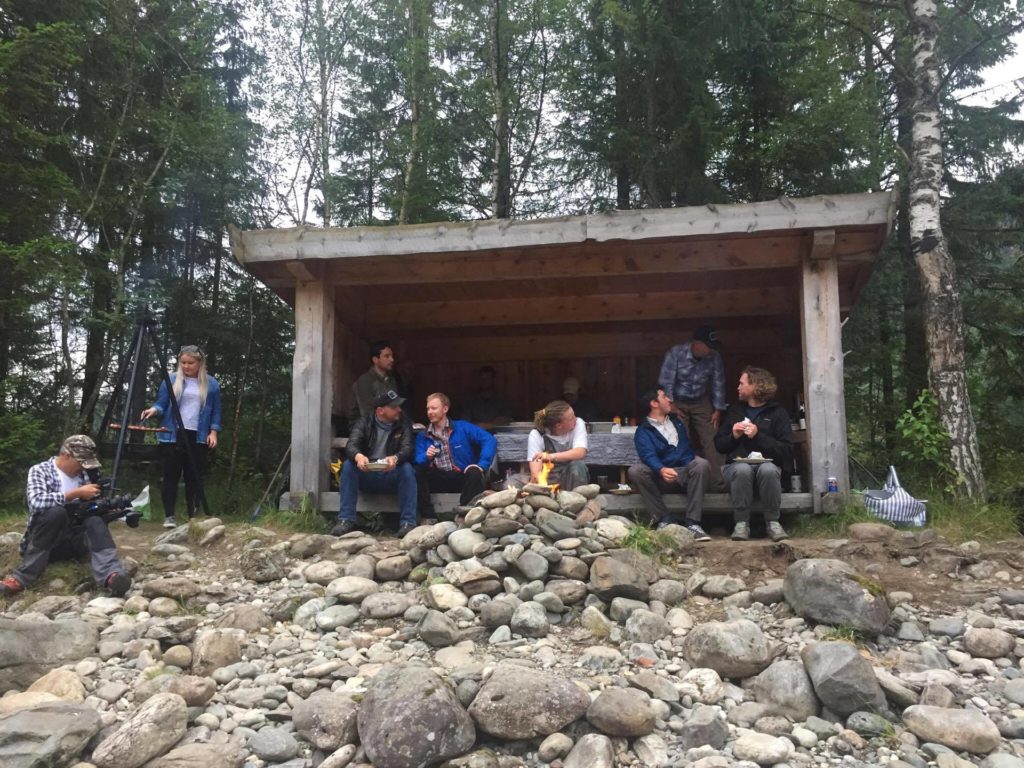 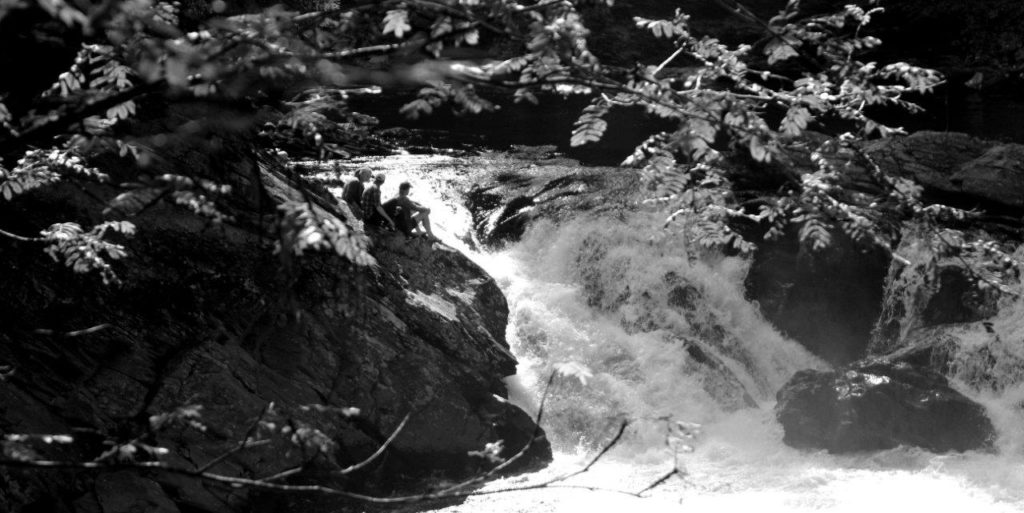 For more information about Winsnes Lodge and salmon fishing in Norway please contact Alex Jardine or call our office on +44(0)1980 847389.