I headed back to Alphonse with a fantastic group in the first week in December. Last year, we had had the most phenominal milkfishing and the question was always going to be, can it happen again?  Well, it did and it didn’t but the full tail will be told in Fish Tails later this week.  In the meantime, below is the weekly report from the island, enjoy the read – it’s just a taster of a fantastic week …. Charlotte. 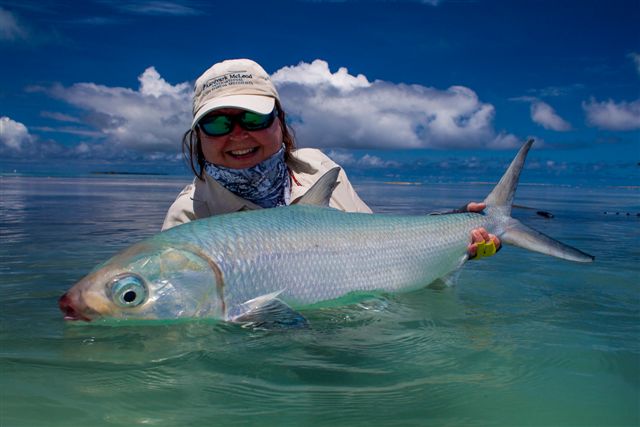 The week started with its normal flurry of magnificent bonefishing as all the teams stretched the kinks from their fly lines and leaders with the help of numerous good size bonefish. During the week, the tides supported some magnificent tailing bonefish action along the edges of the surf, which has to be one of the most exciting ways to catch these magnificent speedsters of the flats. 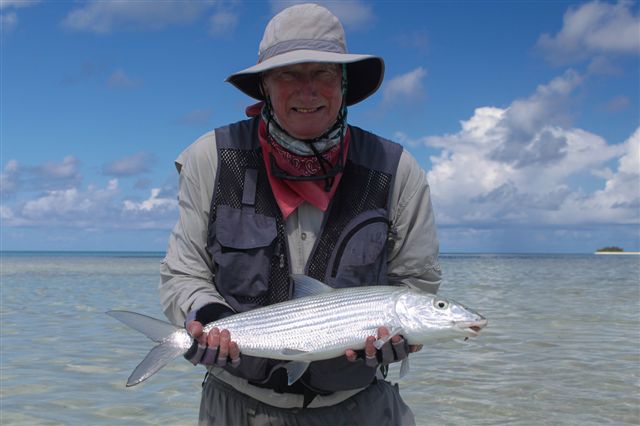 Tony landed the biggest bonefish of the week, an awesome fish of 26 inches. He also had a nice triggerfish caught on his special leader system and deadly fly pattern called the TTC. 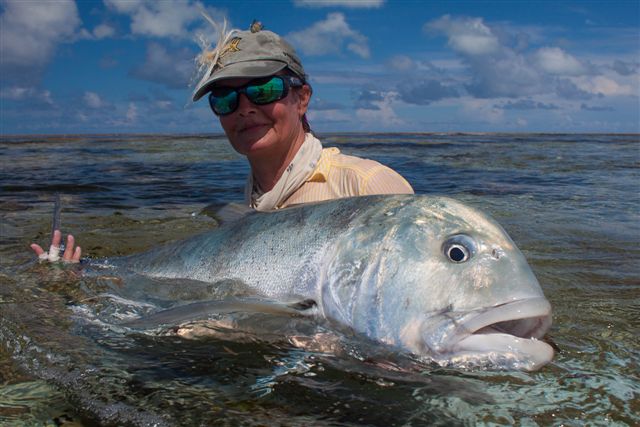 The GT’s were quick to appear and our GT slayer, Maria once again stepped up to the plate to hook and land a 103 cm GT on her second cast with guide Andrew Mayo. 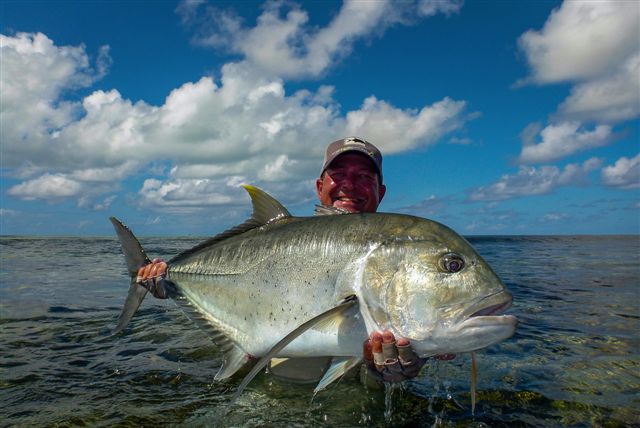 All the anglers had great shots at GT’s during the week and a really good amount were successfully landed.  As always there were the stories of the ferocious fights that ended up in fly lines being lost. The bell rang every evening with great stories being told includig that of  Joern Heiner, who landed a nice 40 lbs GT as well as a specimen Lemon Shark, while walking the surf. 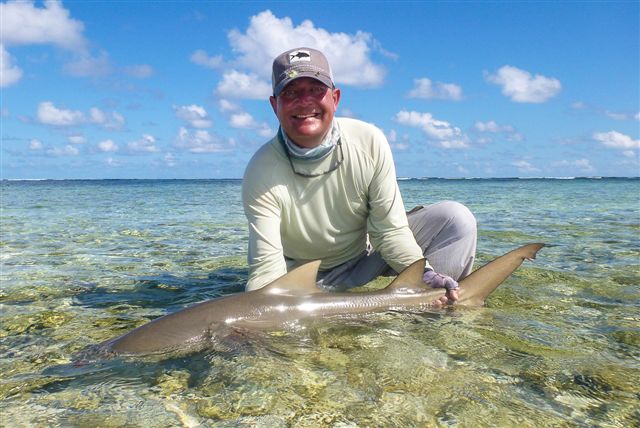 The offshore was equally as productive whether teasing for Sailfish and dredging for other pelagics and reef  species.  Russell  went out for half a day and within minutes had a huge sailfish teased up and ready to cast to. After a well made cast, solid hook set and a spectacular fight the team managed to get the beautiful sailfish alongside the boat. 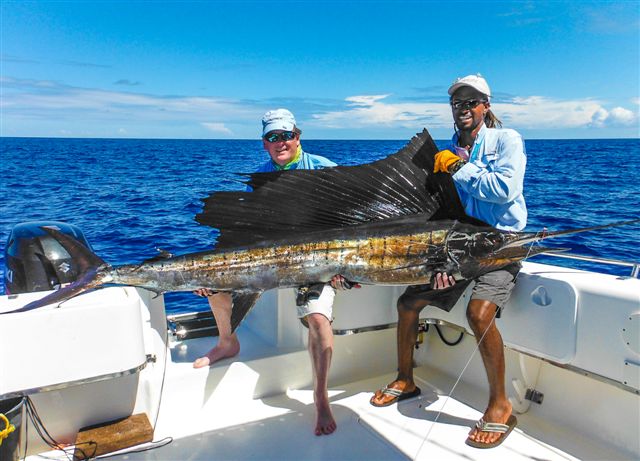 Later on in the day while dredging they landed a black trevally, huge green jobfish and a 35 lbs dogtooth tuna. The Mikfish numbers slowly built with the calmer weather and on Day 2 Joern Heiner and Maria Mazura hooked 6 milkfish in a few hours but unfortunately lost all of these feisty fighters. Russell and Mike were the first anglers of the week to land a milkfish double, while fishing to a small school feeding inside the lagoon. 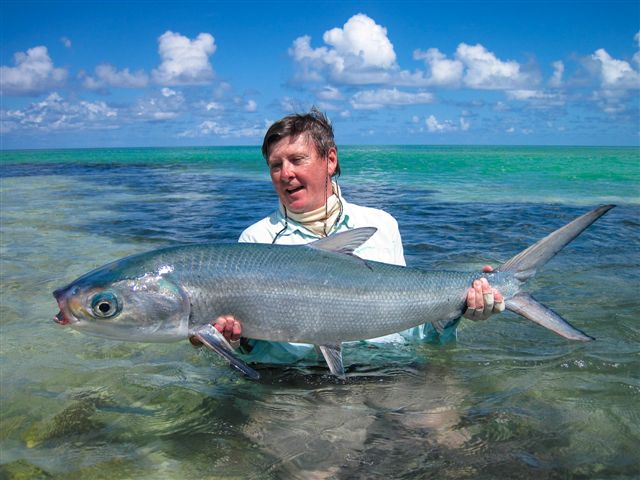 The milkfishing went mad as Thursday approached and this is what one of our guides had to say. 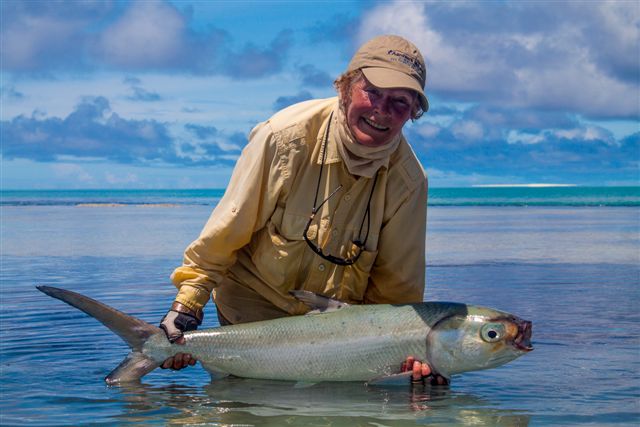 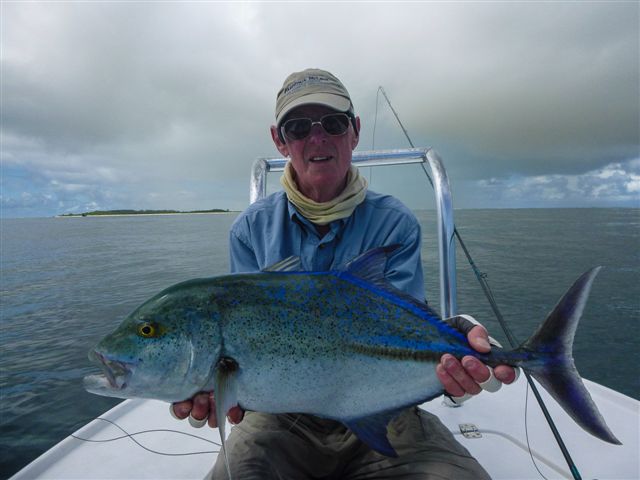 “Thursday was an experience that all the Alphonse guides dream about. A lovely calm sunny day with big visible milkfish in shallow water while feeding in the lagoon on the dropping tide. All the anglers had numerous shots at fish either daisy-chaining or surface feeding both on the flats and in the channels. 6 milkfish were landed on the day and some of them real trophies. Two of the largest milkfish caught at St Francois were landed by a seasoned pair of passionate British fly anglers Tony and Tim.  The largest fish of the day was captured by Tony Richards fishing with Serge Samson after an epic battle fought through the largest lagoon of St Francois. How the pair managed to steer the behemoth around the coral for over 1hour and fifteen minutes is a mystery. Right at the end of the fight the huge fish crossed a very shallow coral finger flat which forcing Serge to attempt at crossing with his skiff or risk losing the fish. The duo hooked the fish in “the badlands” and landed it in “Iggy Channel”, which is more than 1,5 km’s apart. This magnificent fished measured in at 116 cm fork length and had a girth of 61 cm, which is estimated at 55 lbs, enthused Wayne Haselau” 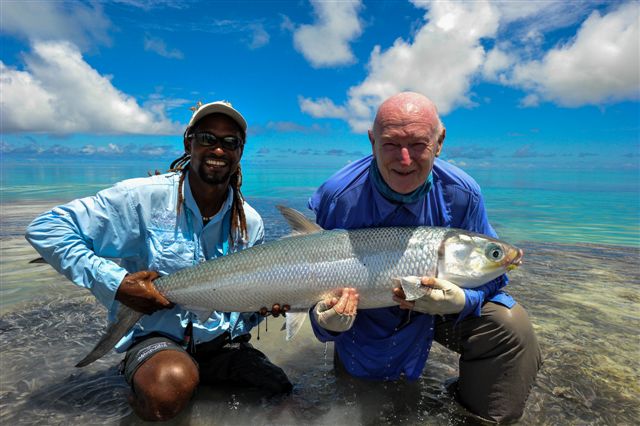 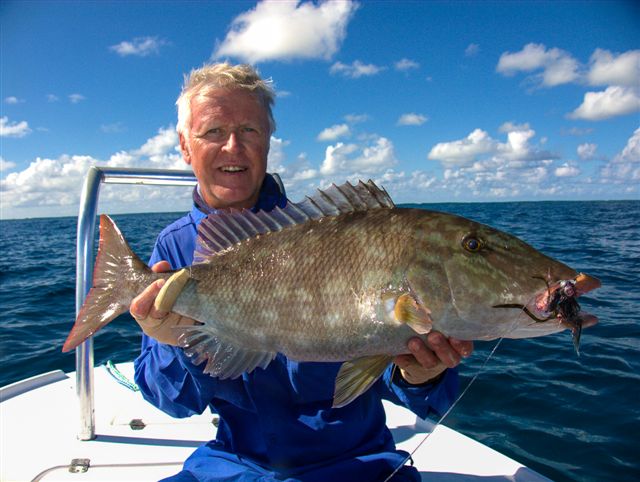