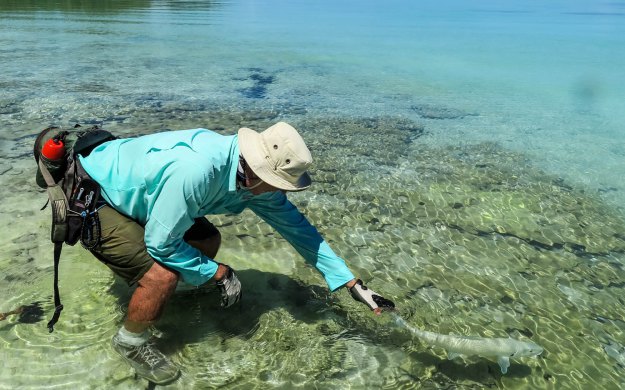 With Farquhar hosting one of the healthiest GT populations in the Indian Ocean it’s quite uncommon for clients to request bonefish as their primary target species. Nevertheless, the inside sand flats as well as the surf flats support large numbers of this species that our guests can enjoy. The team of Michel and Jeremy took full advantage and by casting to and landing numerous individual tailing bones, as well as plucking out of individuals from some large shoals which were made up of 50-60 fish. Such is the quality of bonefishing available on Farquhar, every angler experienced the thrill of this iconic species…a first for five of our guests. Mario managed to land the largest bonefish of the week, with the fish measuring an impressive 29 inches. 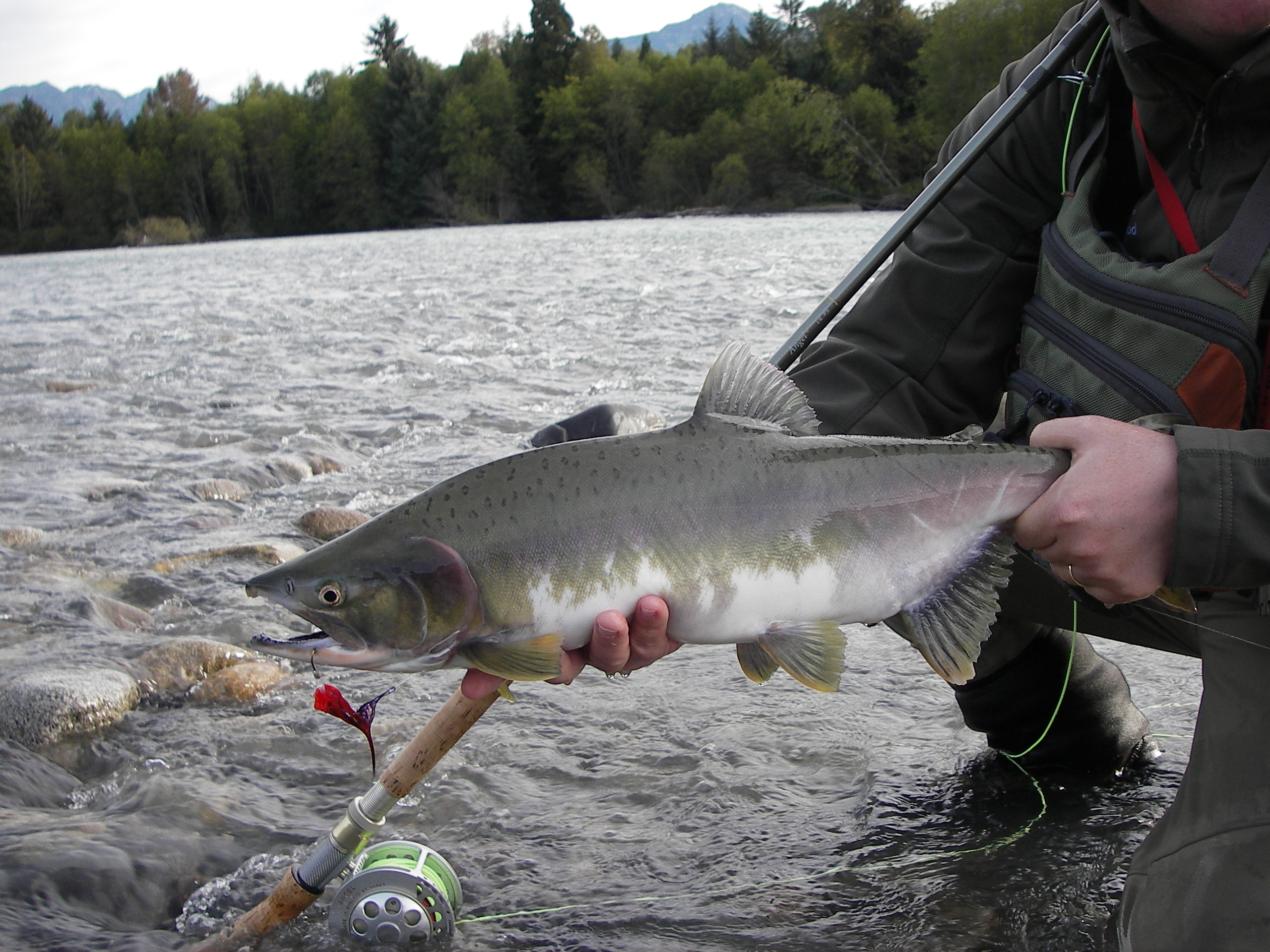 With the permit “hoodoo” broken the week before, we continued to see good numbers as our second week developed. Needless to say the guides were quick to capitalize on their presence and pushed hard to get our guests in front of some feeding fish. The dynamics of Farquhar’s permit population varies; either made up of smaller shoaling fish while the larger individuals, some up to 20 lbs, being either solitary or found in pairs. Each scenario is a challenge, but one which is not quickly forgotten. Once again almost all the anglers had the opportunity at casting a fly at one of these fish. Some having more luck than others with a fish actually eating the fly, but only the truly fortunate sealing the deal by hooking and landing one of these majestic fish. Mario, Clive and Michel took full advantage in bagging these illusive specimens. This meant we landed three permit during the week, bringing the tally to four for the season so far. Watch this space though as we think there are definitely more to come! 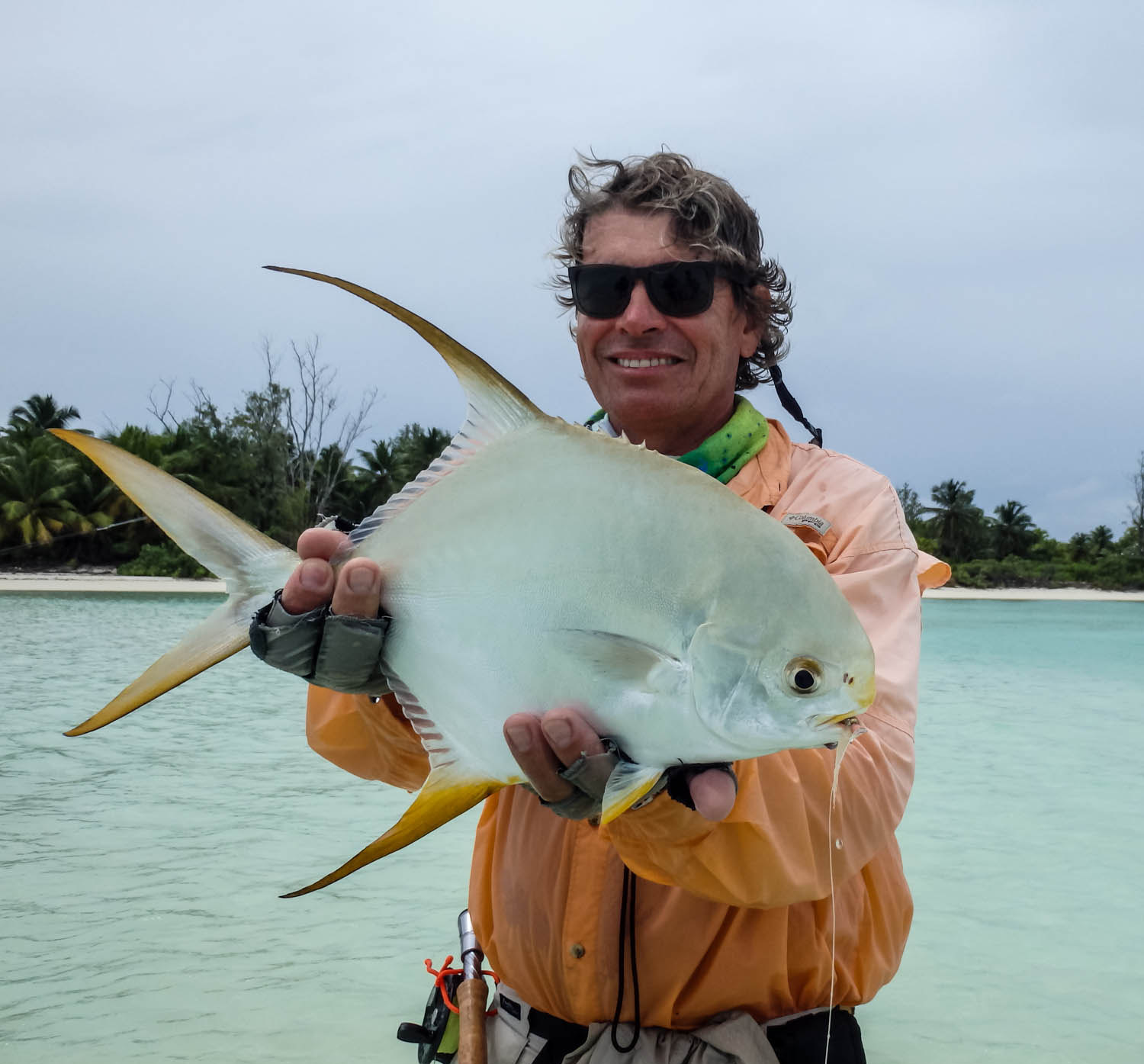 The combination of oxygenated turquoise blue water and good light conditions meant we had good GT fishing. With good numbers of GTs hugging the ever-present stingrays or sharks and numerous free swimming GTs patrolling for food, we were able provide our anglers with realistic casting opportunities at these tackle busting brutes. Jeremy, Mario, and Danie all managed a GT each, Joe managed two fish and Clive topped the scoreboard with four fish. Ray’s luck however had sadly run out before it even began, he ended up losing six GTs during the week, primarily through the fish’s expert ability to tear tackle apart. Our condolences Ray! Alistair landed the biggest GT for the week with the impressive specimen reaching 114 cm fork-length. 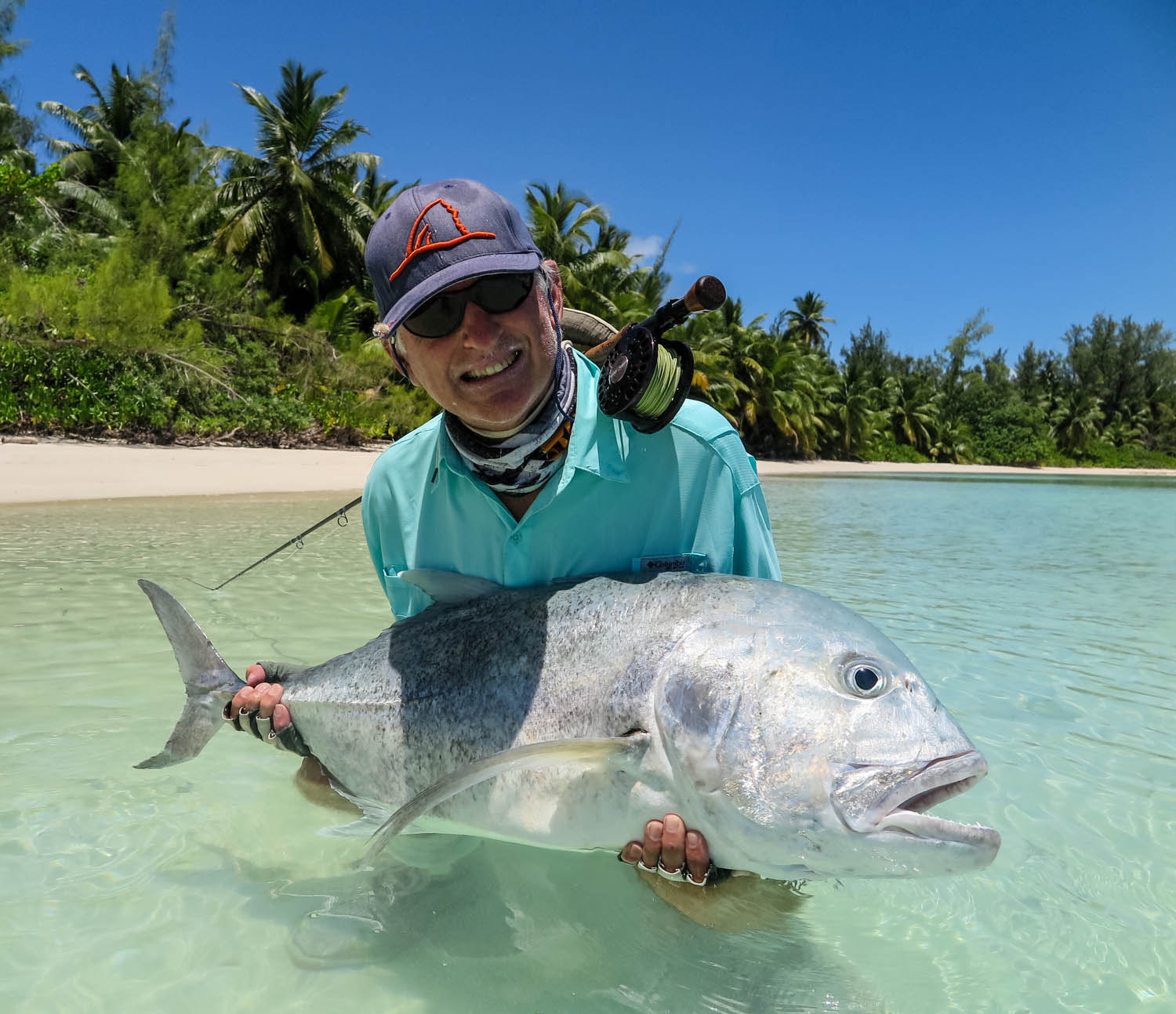 During the high tides some of us headed out to the sea mount just south of Farquhar to try our luck at bagging some of Farquhar’s infamous dogtooth tuna. The team of Ray and Danie took full advantage, landing three and two fish respectively. Clive, Joe, Alistair and John all landed a “doggie” a piece with Alistair’s exceptional 200 lbs monster providing him with ultimate bragging rights. 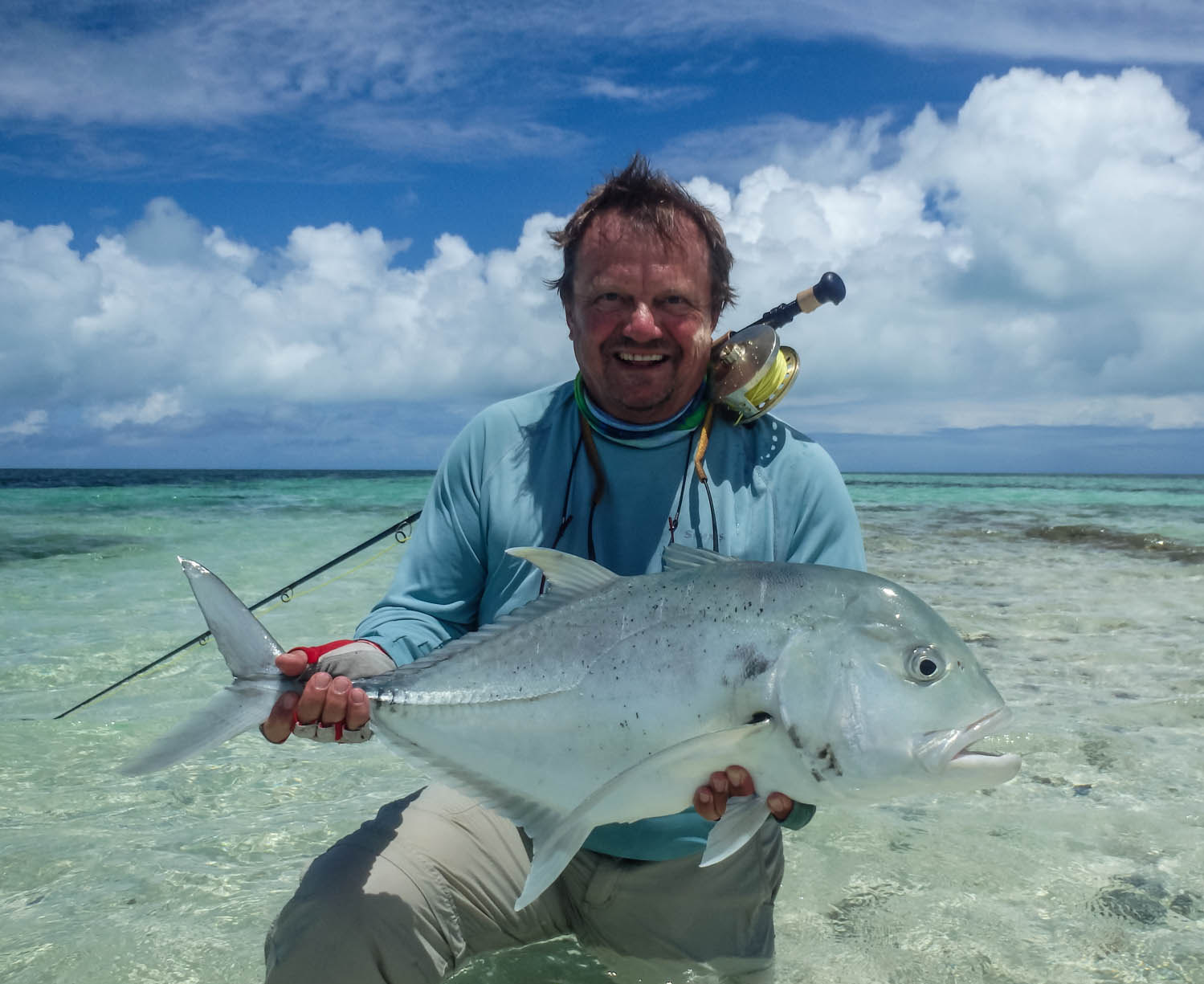 Strangely Farquhar’s triggerfish have yet to show an appearance on the catch cards for our 2015 season. Although large numbers were seen tailing on the flats during the week, in true trigger fashion only the most careful stalk and delicate presentation receives reward. Our anglers persisted and with patience success ensued, Clive and Julia both being rewarded with two specimens that fell for well-presented crab patterns. When the triggers are tough and not playing the game, their capture is one of the most rewarding feelings out there on the flats. Congratulations to both anglers! 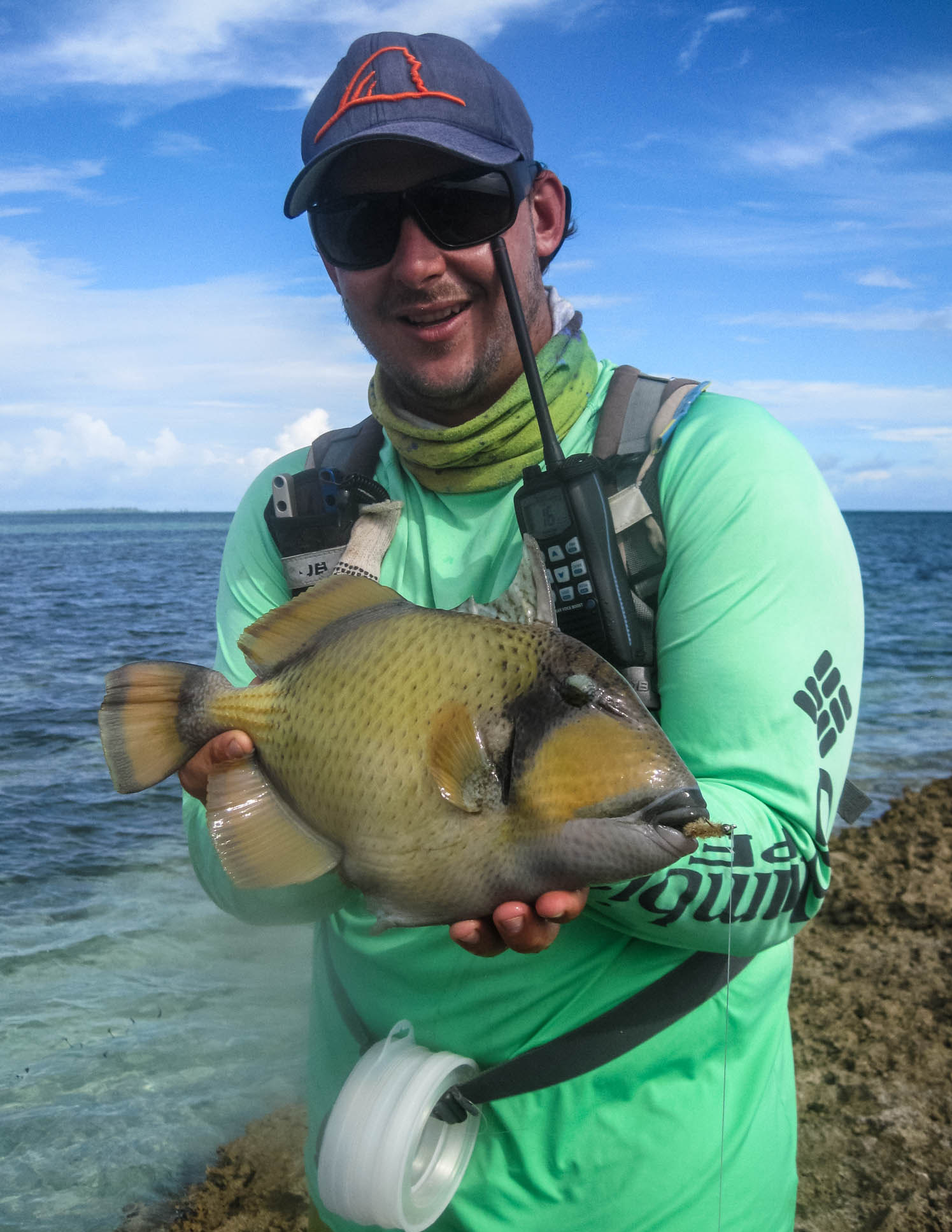 Another solid week thus came to an end and with it the promise of another exciting, fishing filled week on the atoll.