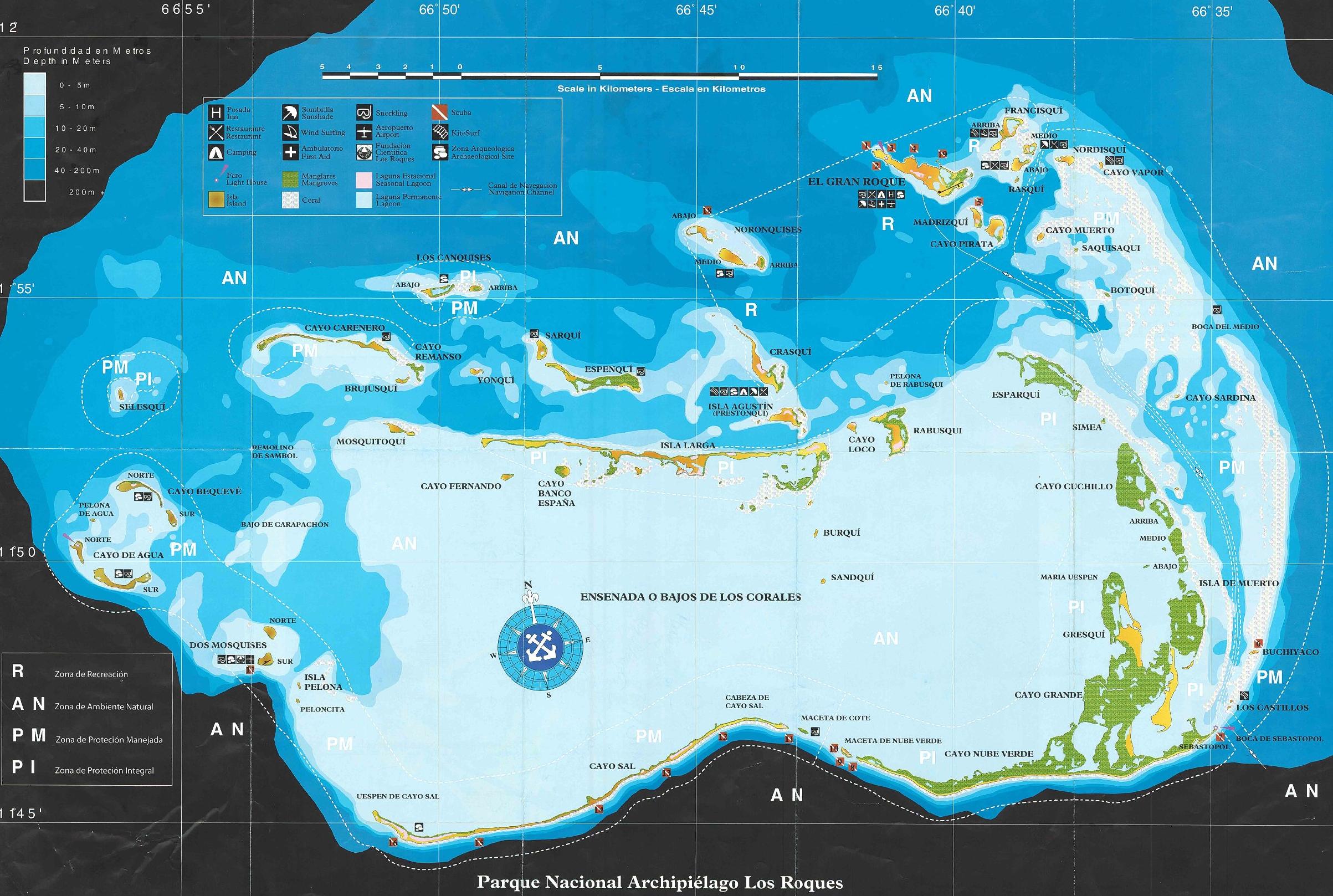 The day started well with bright sun shine as Peter Moylan and I crossed the deep channel from Gran Roques. Efren was taking us back down to Mosquitoqui as the tide was on the push. About half way down the grey skies appeared, and on arrival spotting fish was extremely tricky. However we persevered and Efren spotted a fish for Peter about half way down the flat that he hooked up on. I was standing out on the flat watching and suddenly saw a fish hurtling towards me like a rocket which I threw a haphazard cast at only to discover it was his fish and his line was going in a different direction! Unfortunately it came unpinned and we moved on. The outer flat is crunchy coral before giving way to sandy areas interlaced with channels, and I was convinced they could hear me coming as a number of fish spooked off. I switched to a minnow and hooked one that also came unstuck, much to my frustration. 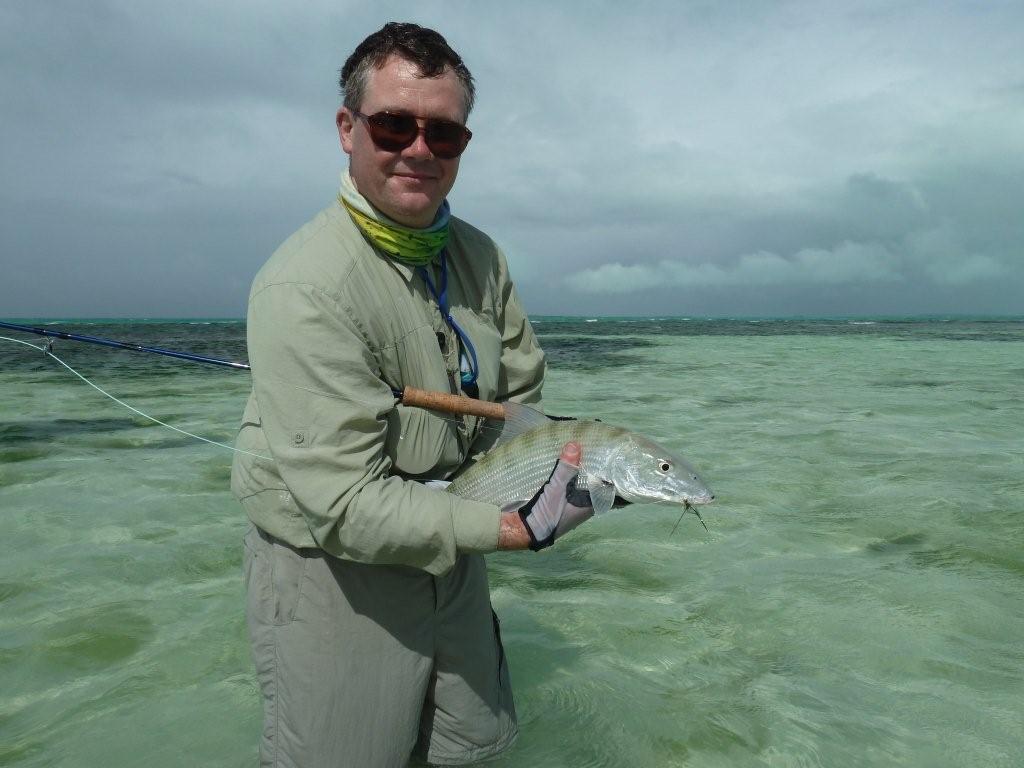 I was lengthening my leader with some tippet material and looking up every so often when this beast of a bonefish came lumbering across the flat towards me… tying a blood know between nylon and fluorocarbon is not something I like doing under pressure! By the time I had a fly on the end and was ready the fish was in eyeshot and spooked away, pushing a bow wave as it went… oh well, you can’t win them all, and this was going to be one of those days. I finally manage to hook one on a small squimp in the sandy water which gave me a good fight and got me off the mark. The one thing I have learned on this flat is you need to ambush the fish. Cast where you think the fish is going to go in plenty time and let it sink. Then as it comes within range, give the fly a couple of small strips which normally results them scooting over and wolfing the fly. 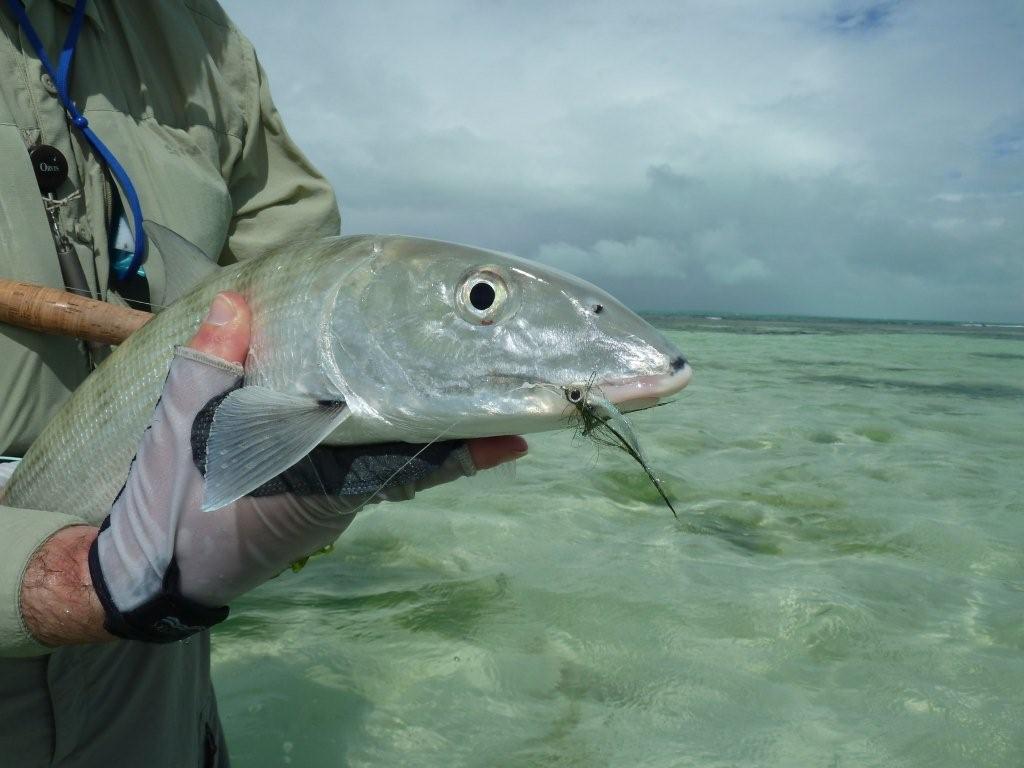 The tide was pushing in, but still pretty low, and our next stop was Brujusqui, a small corally island that normally has some good sized fish on the pancakes. I had some of my most exciting fishing of the week here so far, and actually did not catch anything. Peter Moylan went along the flat with Efren and caught some nice fish along there, and I opted to go round the coral side. Picture if you will coral heads and bomies on the left and then the drop off, and then a small flat to the right which is currently out of the water. In the middle is a white sand lane, and this turned out to be a highway for large bonefish chasing minnows through the coral heads. I hooked two nice fish in there, one on a Los Roques minnow and the other on an amber bonefish bitters. Both the fish destroyed me on the coral, but it was extremely exciting. At one point I was sat on my backside with water up to my stomach as a pod of 6 fish came up the lane around me, none of them were under 6 lbs and I reckon the biggest was nearer 8 lbs. Twice I managed to induce a take, and both times pulled the fly out of their mouths in my excitement. The weather was rubbish by this point, but Efren found us an edge that we could just about make out fish on and Peter caught another couple while I took pictures. There was time for another whack at the tarpon in Gran Roques bay before heading back to the Posada. They were there in huge numbers, rolling around on the bait as before, and we could see them hovering sardines about 3 feet down, but we have still not managed to hook another. My theory is there is just too much bait, and it is impossible for them to differentiate with a fly, and too much energy to chase it when they can just swim around with their mouths open. Hateful fish. 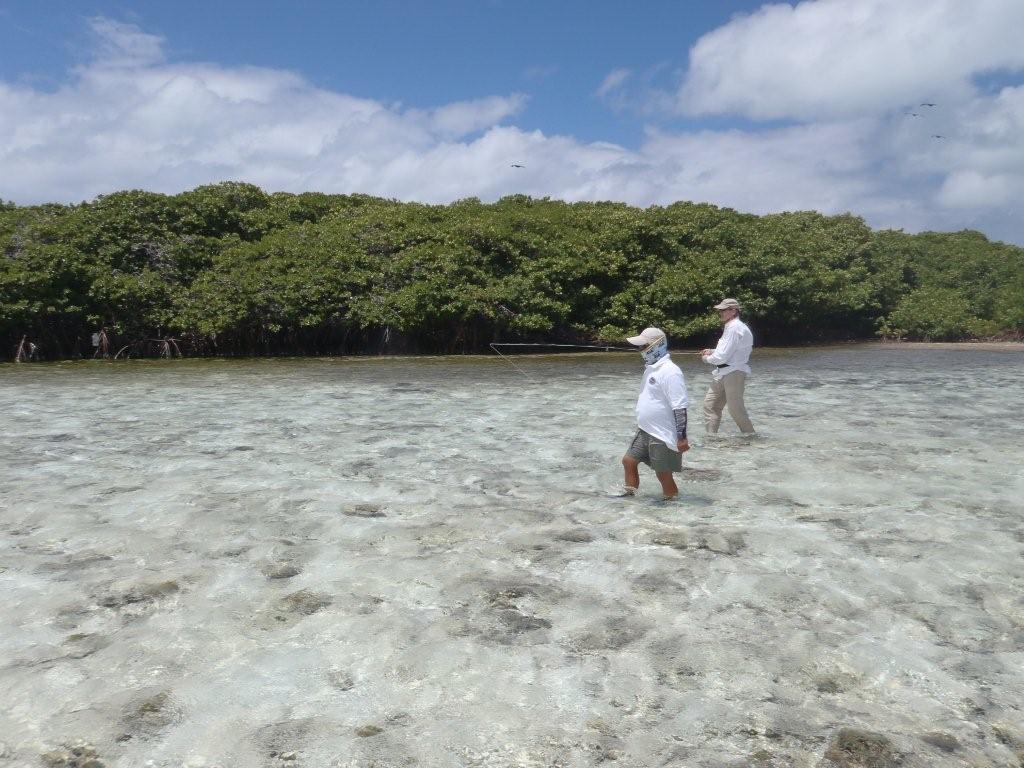 The following day was also tough, but Peter Vikanis and I prevailed and caught a few fish here and there by working hard on Mosquitoqui in the morning. Caranero was blown out with milky water due to wave action, and I caught a nice 4 lber from Crasqui Lagoon. We spent the rest of the afternoon on Madrizqui having a laugh with the bonefish and floating gummy minnows that he is a huge advocate of. These gummies are tied with ether foam inside, and the bonefish come and hit them off the surface. It is highly entertaining and very exciting as they whack them hard. Unfortunately due to their overturned mouth they often don’t hook up, but it is such a giggle. The minnow is cast out and left static. The bonefish swim around it like a shark, and then it is twitched slightly which normally ensues in a “rise”. Darwin out guide had not seen it before and I think it was an eye opener for him as he found it highly entertaining. 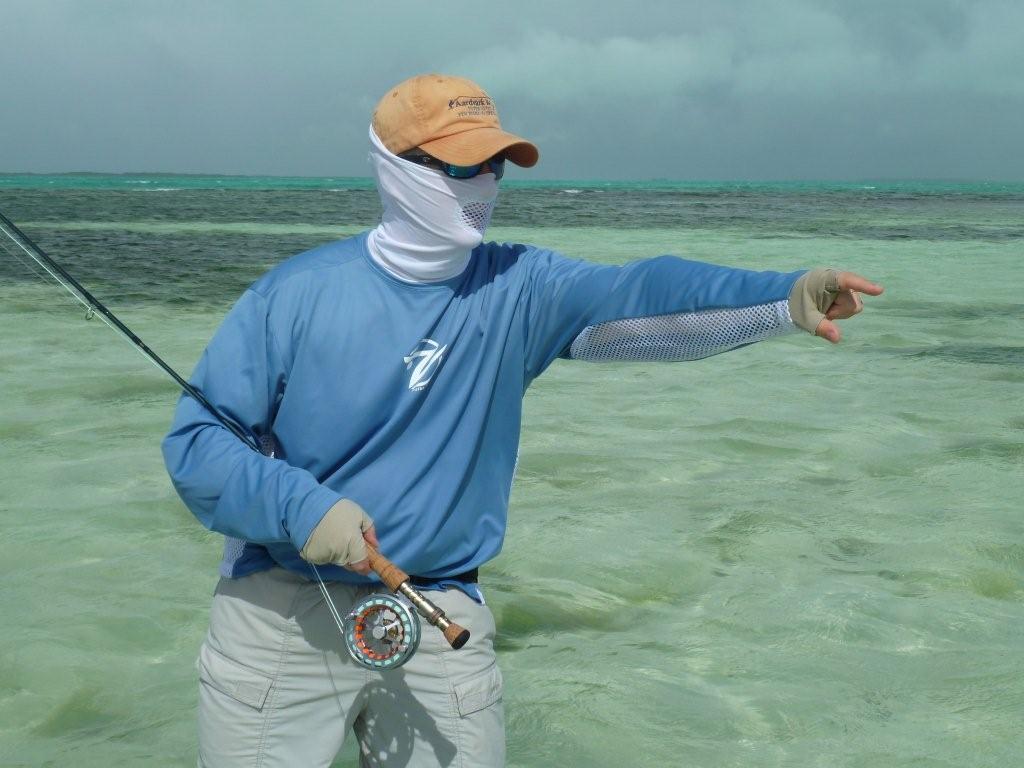 This week I have also been using some new shirts which I reckon are fantastic! They are made by “Breath like a fish” and have mesh along the sides and the arms, and also have a built in buff. I have never been so comfortbale on the flats before, and the shirts are light weight, comfortbale, and the built in buff is excellent. It has mesh over the mouth so you can breath easily, and when not in use is rolled down like a pollar neck. You can also breathe through your nose without steaming up your glasses which makes a nice change. 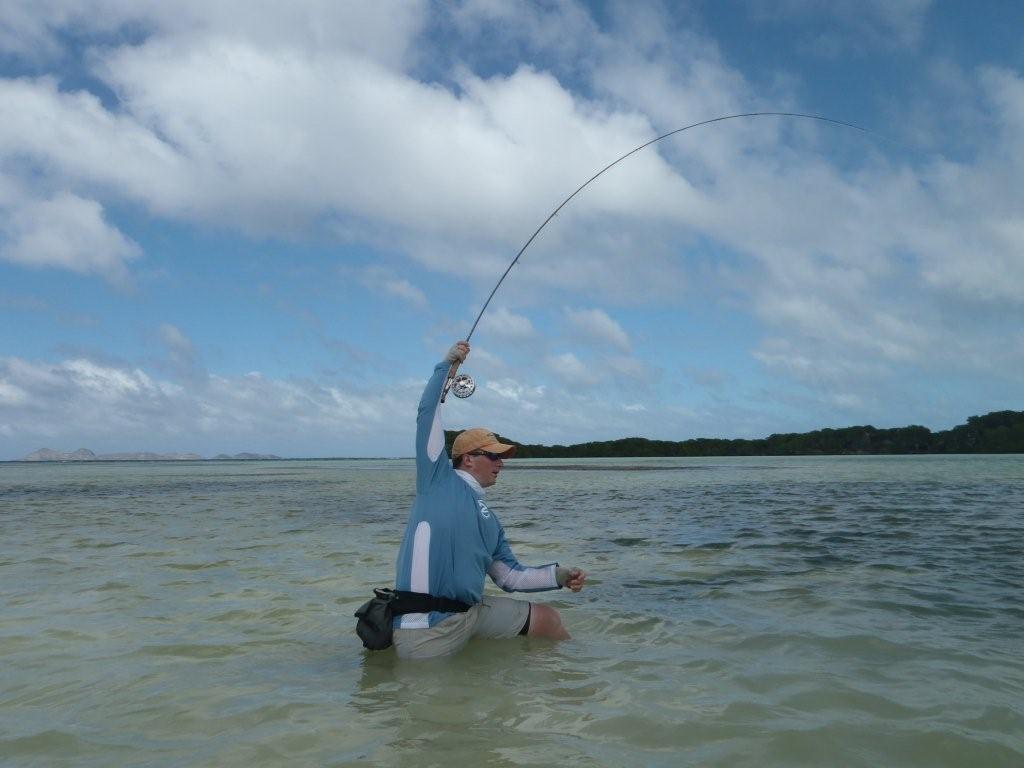 Tim Aldiss hit it right on one of the northern flats and caught roughly 30 fish and is quite tired from landing so many. We are all looking forward to another outstanding culinary delight tonight, massage, and a few relaxing beverages. It is the last day tomorrow and we hope the weather will improve.