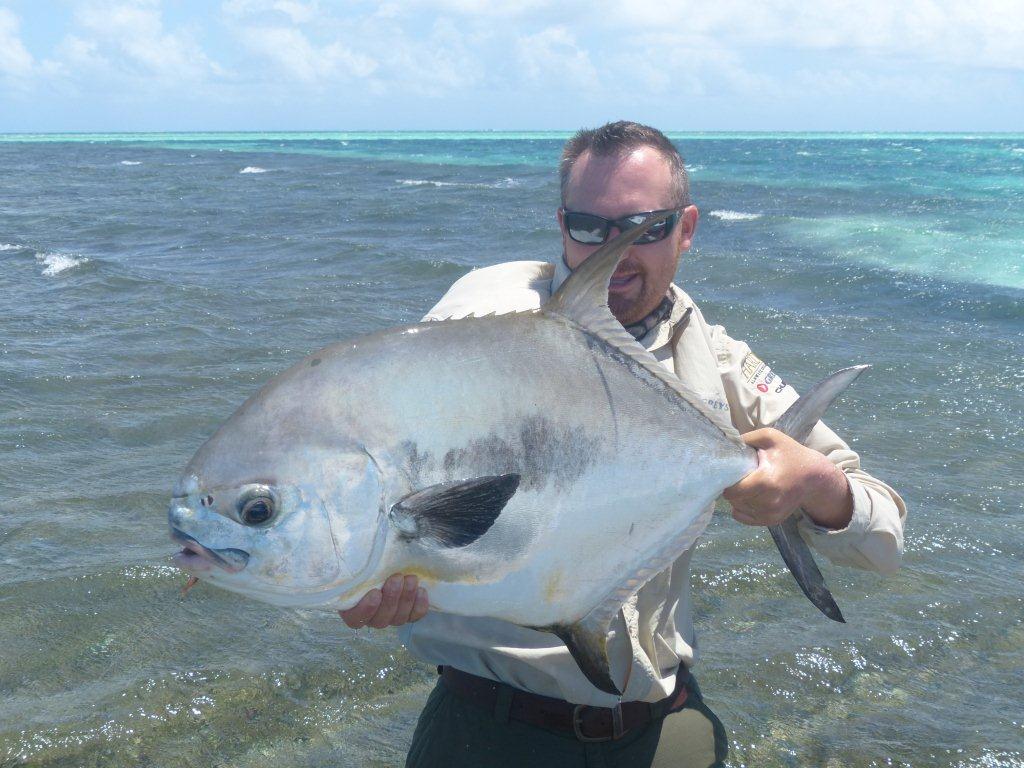 Waking on the Tuesday of our second week Alastair and I were met with a strong wind pushing white capped waves across Gran Roques Bay. Having fished for 10 days already we rubbed the grogginess from our eyes, chowed a quick breakfast and headed for the dock to meet Javier our guide. It was Tuesday… I think… have lost all sense of space and time. For the last few days we had seen a good number of permit on the ocean side, which is normally pretty unusual at Los Roques. Between Alastair and I the average of shots to hook ups was not looking good at present.. but then is it ever when permit fishing!

Javier took us down the eastern flank of the Los Roques Archipelago to the large coral Ocean side flats pushing down towards lighthouse point. Sure enough on arrival there were a few schools of large permit finning along the edge feeding avidly amongst the coral heads as they waited for the tide to clear the flat itself. Alastair was up first and had a dozen shots from the front of the boat without success. While scanning across the other flats Javier and I spotted almost at the same instant the tell tail sign of the black sickles about 300 yards away on the next flat. Permit..

With my heart thumping Javier and I lowered ourselves carefully over the side of the boat and as quietly as possible slithered our way around the flat to attack them with the wind on our backs. As we waded down to them the small squadron was working its way up towards us. The distance closed and the tension between the two of us was tangible. The time had come, and with a slightly sick feeling in my stomach I raised the 10# Hardy Proaxis and managed to execute THE cast right in between the three of them. The size 6 Avalon shrimp sank like a stone and I gave the fly one strip. The middle fish’s dorsal fin vanished as it swam forward to intercept the fly. Before I had managed to complete the strip the line went solid… and all hell broke loose! 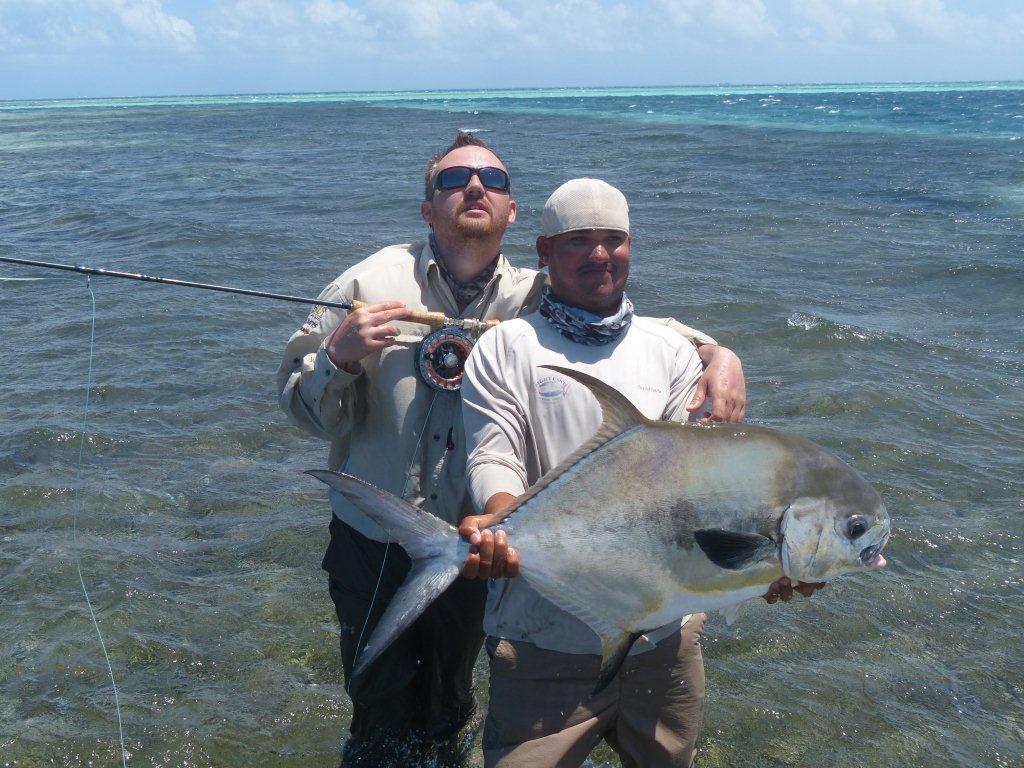 The permit tore off across the flat in a huge arc, the line searing through the water behind it as the prototype Hardy Ultralite SDS reel took up the fight in a squeal of protest. By now I was hammering into the backing as the fish failed to notice it was attached to wayward angler and continued at the pace of a thousand gazelles. Run. Javier and I began to run across the flat as best we could through the thigh depth water in attempt to keep in contact with it. The badly spooked permit slid over the edge of the flat into the deeper channel and seemed to calm a little in the deeper water. Javier ran for the boat and I continued the battle from the front of the panga for a further 20 minutes… until the excitement all became too much for me and a wrong step suddenly had me following the permit straight into the channel. I popped up spluttering, still attached, and while maintaining pressure kicked for the edge. I was getting a little hot anyway… Alastair had developed some kind of fit in the boat the reason for which was beyond me. 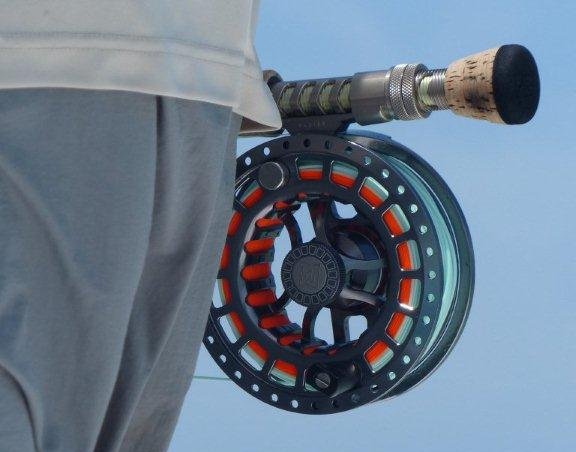 The fish obviously was unimpressed with my swimming and headed up to the next flat, so once my feet hit solid ground I gave chase… again…  Javier and I followed the demented permit right across the following flat and as we neared the edge the pressure began to relax as finally it tired. Soon I had the end of the leader in the tip ring as the fish swam in circles around us. I was slightly wondering how his surreal battle was going to end until suddenly Javier, like a heron attacking its prey he dived into the water and tailed it perfectly! The battle was won, and I had finally realised an 11 year old dream. I reckon it tired faster from having to pull a northern bloke through the water. I was drenched, exhausted, buzzing from excitement and feeling slightly sick, but totally overjoyed! I even smiled! 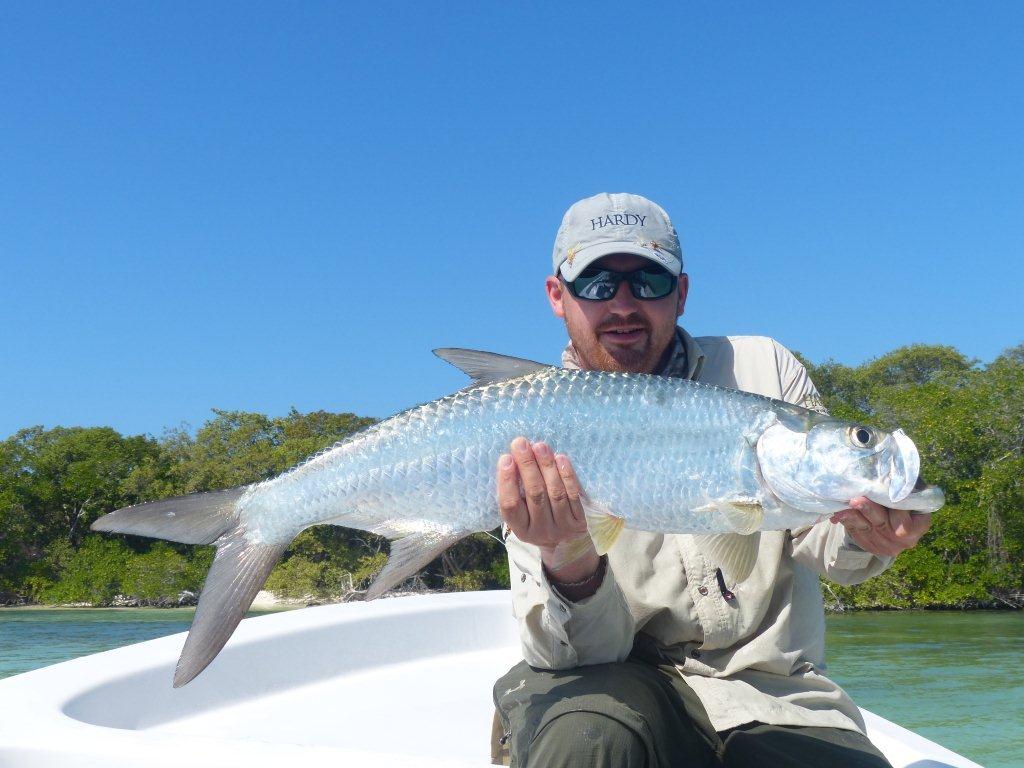 Okay, so permit caught.. tick. The grand slam? Could it be achieved? Javier took us back to the Conch shack so that I could gather my senses and have some lunch. Our group then headed off in search of an obliging tarpon. Rather than try the lagoons Javier took us again onto the ocean side where we looked in the clear sand spots under the mangroves. Sure enough we saw a few tarpon milling around, and spooked them before we could get close. Then, out of the margin swam a lone tarpon. For mangrove fishing I prefer a Hardy Pro axis 8# with a 50lbs shock tippet to prevent spooking them. The small green and white Puglisi streamer sang out and plopped invitingly just to the side of its path. The fish lazily turned towards it, and I began to give it a Florida Keys style bump and wiggle. The tarpon hung in the clear water and slowly inched along behind it. As the leader hit the tip ring and now no more than 10 feet from the boat it opened its bucket mouth and rolled on the fly… and I set the hook… Hard. The fish crashed out of the water, but there was no way this was getting away as I boated it in record time. Tarpon…, tick. Just a bonefish, that should be easy right? 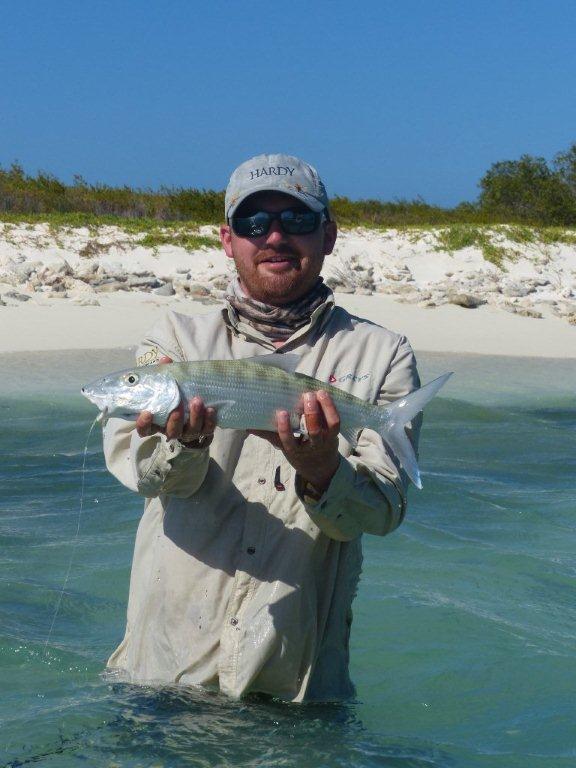 After 30 shots at bonefish on the flats including two trout strikes and nail biting glances at the watch I finally managed a lovely 4 lbs bonefish on one of the beach flats on a small sand eel. A Los Roques grand slam. Wow! Pete McLeod had told me that he had only heard of three other grand slams landed at Los Roques, so the sense of achievement was tangible. Los Roques remains to me one of the most consistent and unsung destinations available, and I am already panning my return trip for next year.. I hear they have snook!