After a difficult season in 2008 – courtesy of the winter refusing to loosen its grip on the Kola Peninsula, the early 2009 weeks have seen a marked improvement. Indeed I have just returned from the Acha Camp on the Ponoi where our Anglo- French party of six rods landed 407 Salmon for the week. Last year ten rods struggled to get to 275 during the equivalent period. 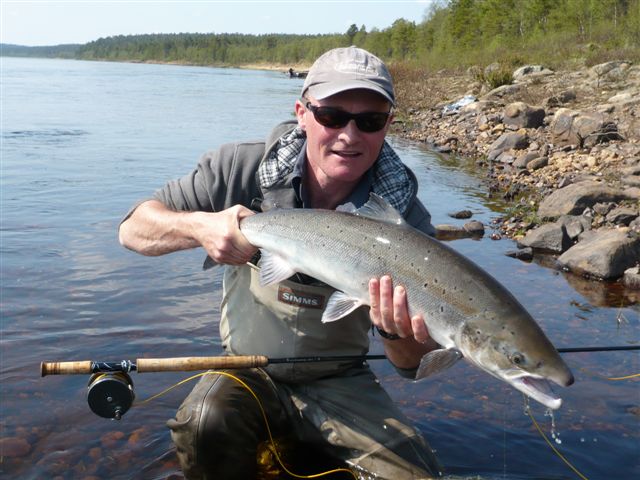 The Party, who had all fished at Acha before, flew out from Heathrow and Paris respectively on Friday 12th via Helsinki to Murmansk. The usual stopover in the Holiday Inn had improved due to a major makeover of the Hotel and its facilities. We were in the helicopter within 50 minutes of landing in Murmansk. The Airport there has also undergone further improvements with more to come over the next year. 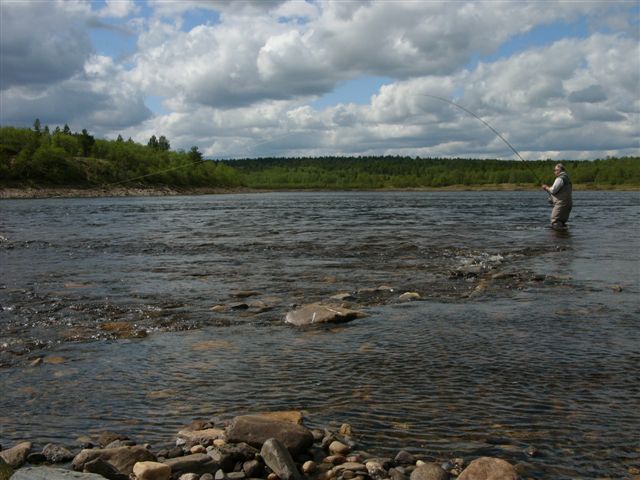 Once aboard the M18 chopper we met our four Russian co- rods who were to join us for the first few days of the trip. They were sitting either side of a large coolbox at the front of the relatively empty transportation. As the engines fired up one of the Russians (who turned out to be the Mayor of Sevorosk) opened the coolbox and proceeded to pour the assembled company a plastic beaker of Beluga premium Russian Vodka. We were then given various canapés (for want of a better word) as the bird lifted off the concrete. Further vodka was dispensed along the route and more food was also passed around the passenger compartment. This carried on most of the way to our refueling stop at Lovozero which came as a welcome break – momentarily escaping their premium rocket fuel! 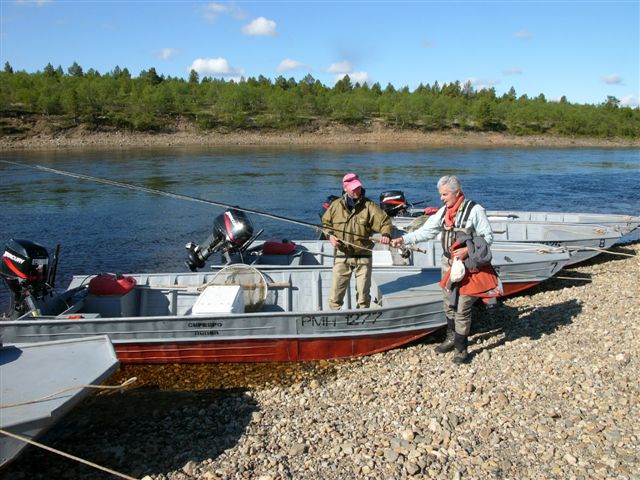 After two bottles of Beluga we arrived at the Camp feeling slightly worse for wear! On landing we greeted old friends and then quickly assigned ourselves a cabin and unpacked before tackling up and drawing for beats. After a swift supper we were on the river by 1930 on that Saturday evening. That first evening session yielded some 40 fish which encouraged the team no end. A brief snack after fishing was not attended by the Camp Manager Steffen Juhl as he had been closest to our Russian friends en route- it transpired he had been given double rations! 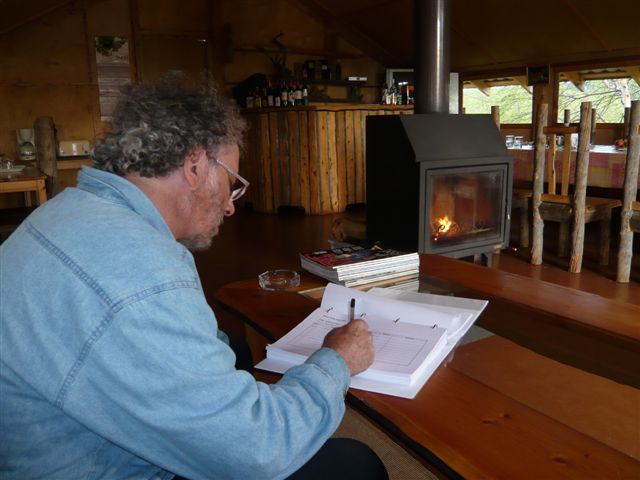 The fishing rotation was slightly different to previous years as the Russians wanted to be on neighboring beats all the time. Having been told they were members of the Murmansk Flyfishers Club we were slightly surprised to see all manner of ironmongery being produced. However their assorted weaponry was no where near as effective as a Murmansk Munro on a full floating line. We estimated that for every fish they caught we landed 12 to 15. Mind you their vodka consumption was considerably superior.

The weather was fairly changeable with an easterly blowing at Patagonian pace upstream for part of the week. The wind whipped round to the south bringing muggy sultry conditions after a glorious sunny day. The ensuing electrical fireworks display was spectacular and sent rods scurrying back to Camp for an early shower. Fortunately the following day the wind was back to the North East which gave the mosquitos second thoughts about coming out to play. The water temperature rose from just under 10C to about 15C by the end of the week. Strong winds in the past have caused the river to colour up but we were fortunately not seriously plagued by this problem. The Acha and the main river both dropped early in the week before rising towards the end of the week. 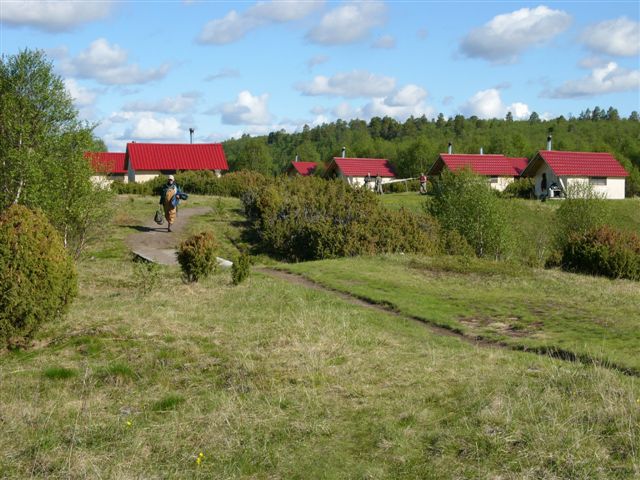 The Acha run of fish tailed off toward the end of the week thus making fishing on the Camp side of the Home Pool and Beat 3 somewhat slower. However the opposite bank carried on yielding fish after fish. Beats 1, 4 and 5 all fished very well with double figure scores most days for each fishing pair. The river was low enough for the majority of fish to be caught from the bank rather than the boat. In fact very few fish were caught from the boat all week as the team all had their favourite bankside spots they had gleaned over the last four or five seasons.

The birdlife was not as good as previous years- perhaps the milder weather had moved some species further afield. The peregrines from Beat 5 were in neither of their usual spots. However I did catch a fish right under a much lower nest a couple of miles up the Acha. The parents both swooped in low over the river within 15 yards of me at spectacular speeds. 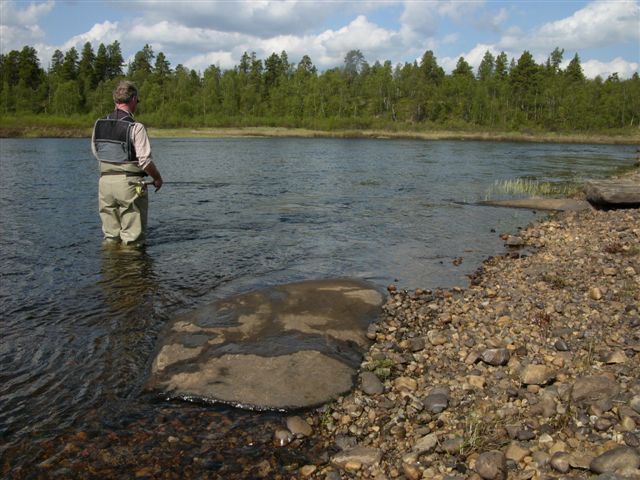 Sadly there was no Irina (aka Cleopatra) in Camp this year as she had been lured to the bright lights downstream and promises of dollars aplenty. Life as a dish washer at Ryabaga was not what she envisaged and she tried to stow away on a chopper in vain to come back to Acha. Dear old Tanya was there to look after us instead and she did a marvelous job all the same. The same chef produced good wholesome fare and his sushi was fantastic. The Russian rods produced even more vodka and some delicious smoked halibut. They eventually departed on Wednesday so we had more Beluga, speeches followed by 12 year old malt whiskey the previous night. All good fun but a bit harsh on the liver! Igor’s birthday went smoothly and he was barely off games for more than one session.

There were three new guides in addition to Igor, Maxim and Andrei. They all spoke good English and we all taught each other new tricks and fresh spots to try. The average of 67 fish per rod was better than the up and downstream camps. One of the team did catch a large number of fish out of hours so I reckon that the underlying average was probably 58 fish per rod in normal, reasonable hours. The five year average for the week is therefore now around the 45 mark per rod. Sadly no 20+ pounders were caught and the number of fish in the teens was down although bigger fish did show up as the week went on. 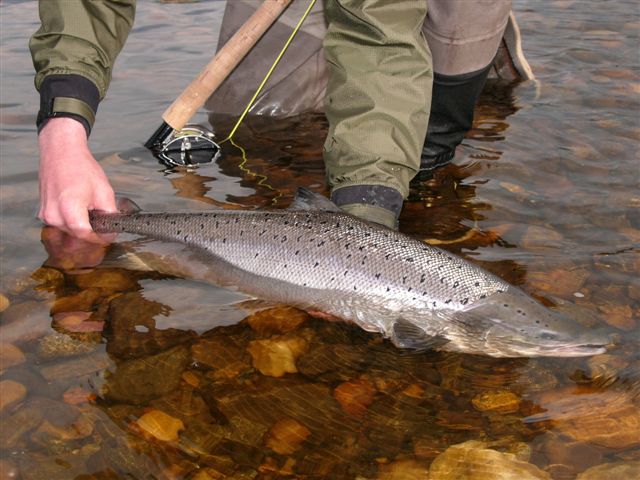 In summary- a highly amusing and productive week with good company, reasonable weather and superb water conditions. All in all floating line paradise?