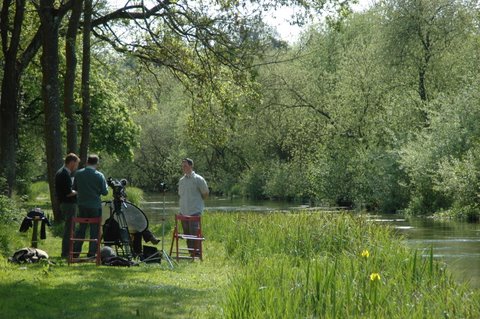 About a month ago I received a call out of the blue from Liam Gray at Hoff TV in the US enquiring if he could come over and interview me about an experience I had on Cosmoledo Atoll back in 2006. He had read my trip report and thought that the cliff jumping incident warranted an appearance on a new programme that he was directing about extreme fishing. Obviously this came as quite a shock to me, but was extremely gratifying that someone actually read my articles!

Liam arrived with a film crew and Simon Cooper from Fishing Breaks kindly donated a beat on the Test as a back drop for the interview. Luckily for us the weather held and Liam managed to get most of the info he needed although I am sure I was dreadful having never appeared on camera before. Luckily I believe he is an extremely good director and they will be able to cobble something together with some creative editing! For those that want to see how many pounds the camera adds to my already large frame and to take the Mickey it will be airing live internationally in October on one of the major US cable television networks that Hoff TV is producing for.