Season’s end has come for the Seychelles and the flats are all having a well deserved rest before the season picks up again in October.  Below is a short summary of the season, the results really speak for themselves. Enjoy the read and marvel at the fact that this fishery consistently produces the results.  It remains the most productive saltwater fishery there is with an excellent standard of accommodation and service, for both anglers and those not yet converted to the joys of fishing.

For more information on any of the Indian Ocean destinations, or for a detailed itinerary please contact Charlotte Chilcott or call +44(0)1980 847389. 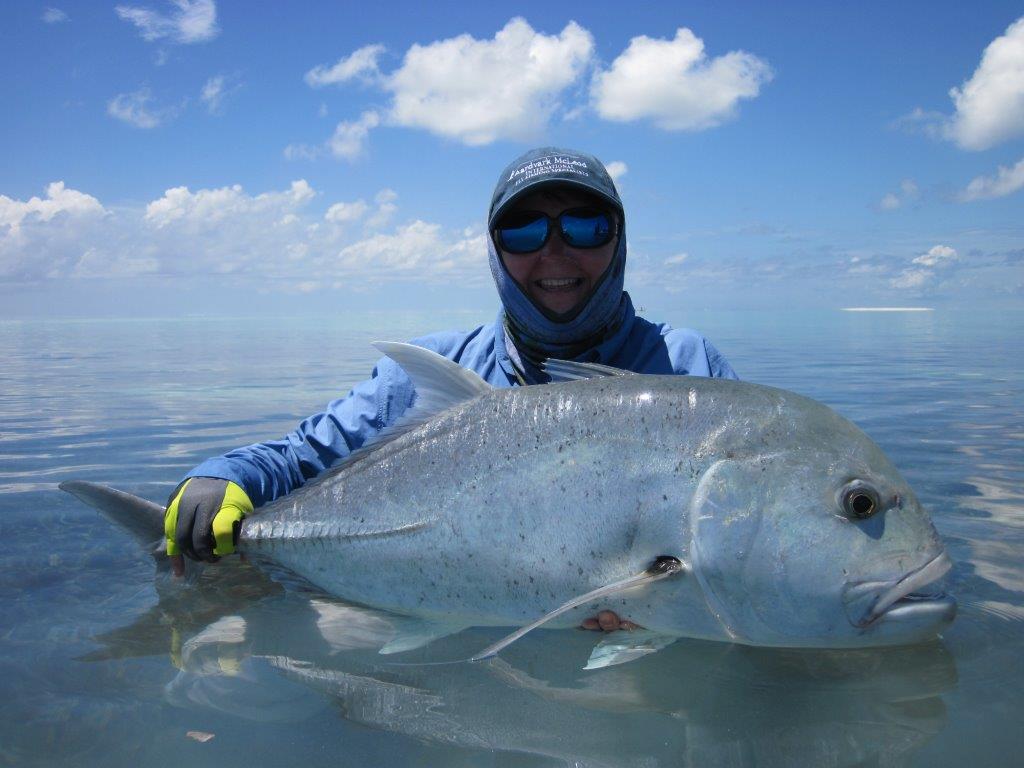 Alphonse Island and St Francois holds the reputation as the best Bonefish fishery in the world and this past season the fishery rose to the occasion once again. 13,086 bonefish were caught and released during the 30-week season. Since its introduction 281 anglers achieved the ‘’Alphonse Twenty Bonefish Club’’, which is 20 or more bonefish in a day. There were also some bigger bonefish caught, especially in the later portion of the season when the flats water was cooler. The biggest fish of the season toped the scale at a whopping 9.8 lbs.

The positive spirit, rejuvenated outlook and new techniques from the fresh team of guides had a record impact on the trevally landed this season. The GTs were bigger than past seasons with 57 over a meter.  The biggest fish by only 2 cm measured a massive 129 cms and weighed approximately 100 lbs. A further 190 GTs were landed for the season, which averages at just over 6 fish per week. The GTs little brothers also broke records with 563 bluefin trevally landed.

The St Francois lagoon has also gone through some very interesting changes and it’s officially become a very active permit fishery, with daily encounters expected. 19 anglers were lucky enough to land an Indo-Pacific permit, which is by far the hardest permit species to land. Not only did the guide team make inroads into the GTs but also developed new techniques and crab fly patterns to target the ever-present finicky triggerfish. Selectively targeting them during neap tides whilst on pancake flats has made an incredible improvement to numbers with 48 yellowmargin and 46 giant triggerfish being landed.

The guides always have their eyes switched on when it comes to our magnificent milkfish population and their feeding habits. Cementing this claim is the incredible result of 61 milkfish landed. Seasoned milkfish hunters will know that in order for 61 fish to be landed 427 were hooked and “the bests” simply got off.  It’s fact that there is nowhere else in the world that comes close to the milkfish fishery at Alphonse and St Francois.

The Alphonse team celebrated 29 “Grand Slam” titles, consisting of a GT, milkfish and a bonefish in a day season. Whilst the milkfish were returning from their spawning grounds the guides actively chased the “Flats Slam” that involves the tricky triggerfish, GT and the ever-present bonefish. The bell rang out with 31 anglers rising to the occasion. A total of 60 “Slams” for the season is a new Alphonse record. Alphonse has a very unique geographical layout and as you know is home to hundreds of thousands of bonefish that dwell in areas in close proximity to where we catch sailfish on fly. To add to this seasons achievements 17 anglers managed to catch a “Bills & Bones” slam this season when they caught a bonefish and a sailfish in one day.
The team is stronger than ever before and the enthusiasm and willingness to give 120% for each guest has made this season the best in years.

For more information on any of the Indian Ocean destinations, or for a detailed itinerary please contact Charlotte Chilcott or call +44(0)1980 847389.