This week anglers of Alphonse faced very challenging conditions due to a tropical depression off the coast of Madagascar. Heavy precipitation, 100% cloud cover and winds gusting to 25 knots shaped the week, with fast pushing spring tides creating lots of water movement. The short and quick drop in the morning produced excellent bone fishing with the most notable catches being Pitt Hyde’s 67cm fish and Amy Carter, who is new to fly fishing reaching her goal of 20+ bonefish and a 65cm beauty. 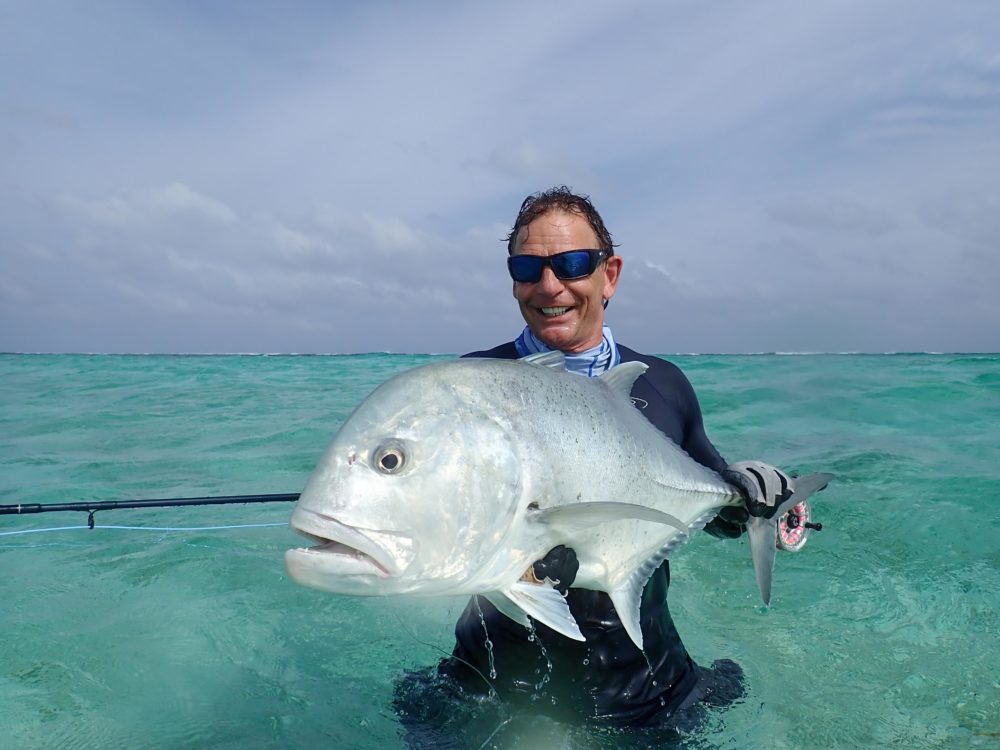 As the tide reached peak height most anglers fished along the apex and surf searching for sharks and rays with GT’s close behind – a worthwhile tactic in low light conditions. Our long term guest Ron Benck who specifically targets only GT found an impressive 102cm fish on the Beirut coral high spot in the last hour of the day, while on Ignobilis finger flat Alexandre Hirst managed his second GT of the week. Peter Ahluwalia also had excellent trevally fishing landing a trophy 74cm bluefin and an 85cm GT. 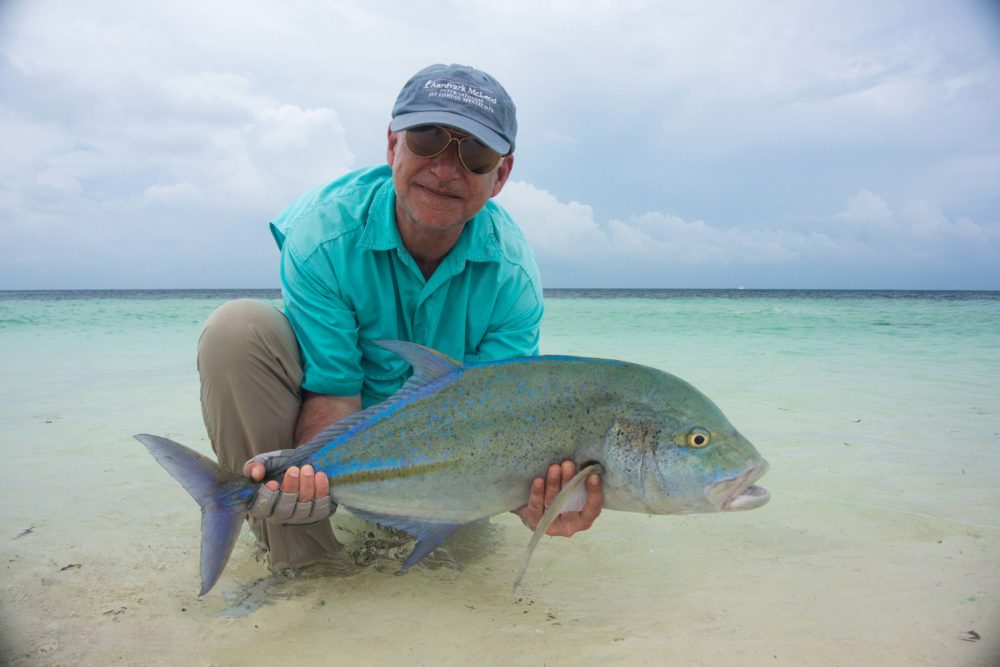 While the triggerfish eluded St. Francois anglers, two tailing Moustache triggers were captured by Murray Stacy and Chuck Grehn in the Alphonse surf. Lastly for the flats but not least, the one that everyone wants to catch, the Indo-Pacific Permit was caught by Bill Osborn at Guantanamo Bay during a small break of sunshine. Offshore, the fishing continues to produce as Tony Chambers achieved the ‘bluewater slam’ of a wahoo and two sailfish on fly and also Rob Simini managed to catch his first Sail on fly. 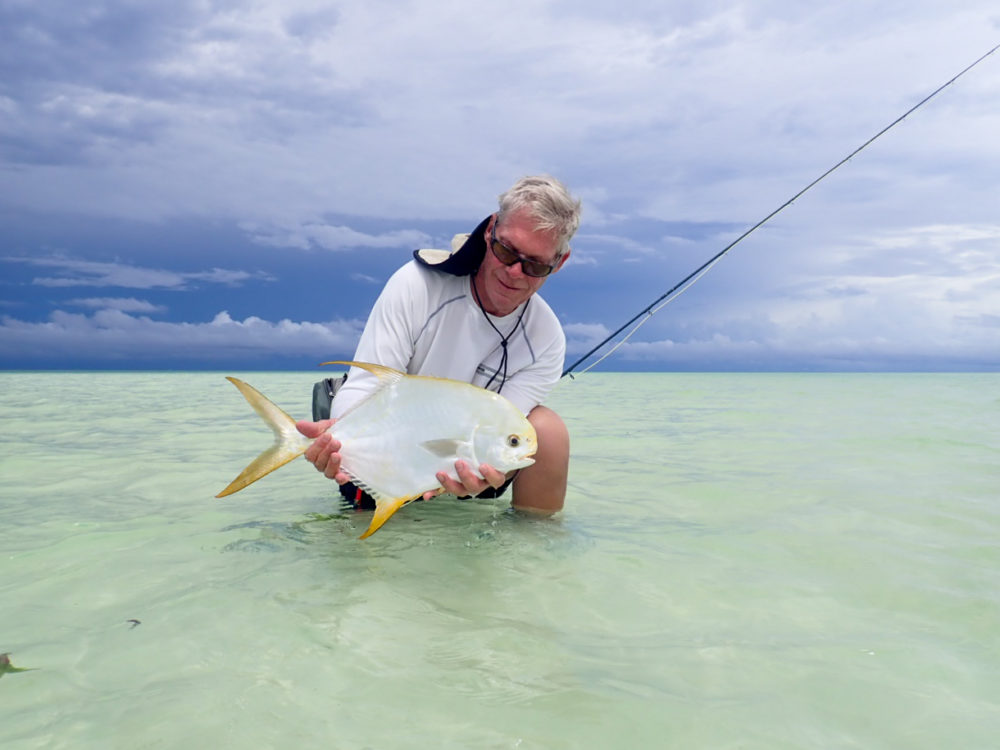 Congrats and thanks to all anglers on their catches and for their perseverance through tough weather conditions. 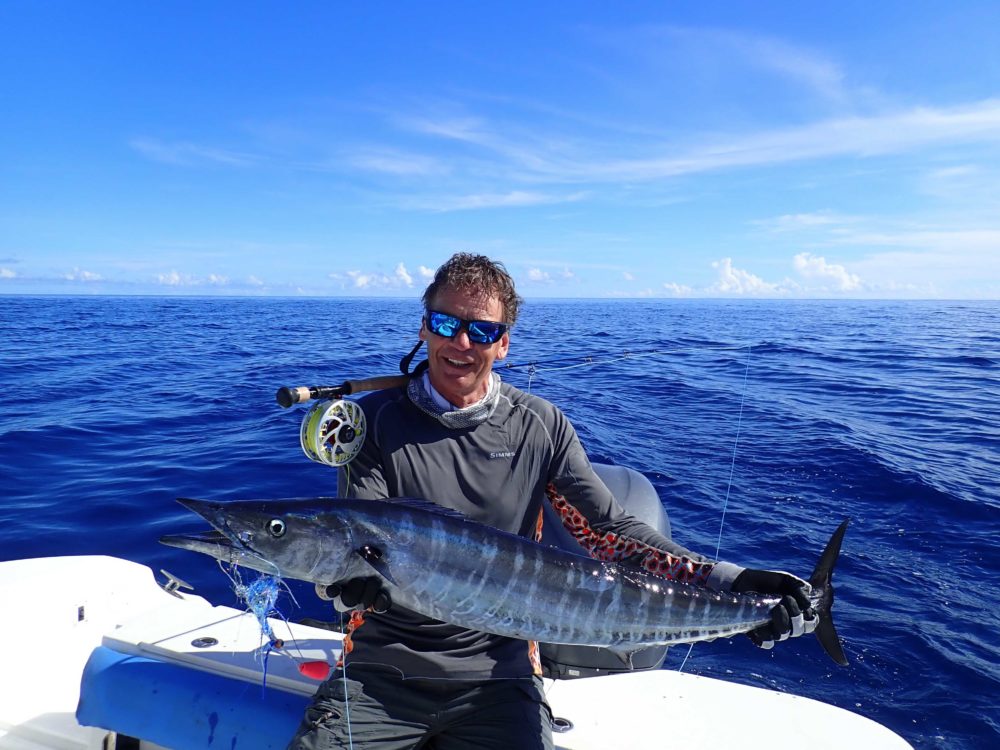 This week the anglers at St. Francois atoll encountered favorable conditions with good visibility, transitioning spring to neap tides and relatively strong yet inconsistent north winds. The first few days comprised of excellent bone fishing with many anglers reaching personal bests of 20+ fish in the 60-65 cm range.As the wind and tides eased anglers chose triggerfish as their quarry and caught five for the week. Robert Gilchrist fished the western surf and landed two beautiful Moustache triggerfish in one day, while Billy Osborne managed a massive Yellowmargin estimated at eight pounds on Milky Way finger flat. Sam Gary chose to target the more esoteric species and persevered through hooking and loosing two Milkfish on the flats after lengthy battles. However he finally met ultimate success on his last day landing an absolute behemoth metre long Milkfish. 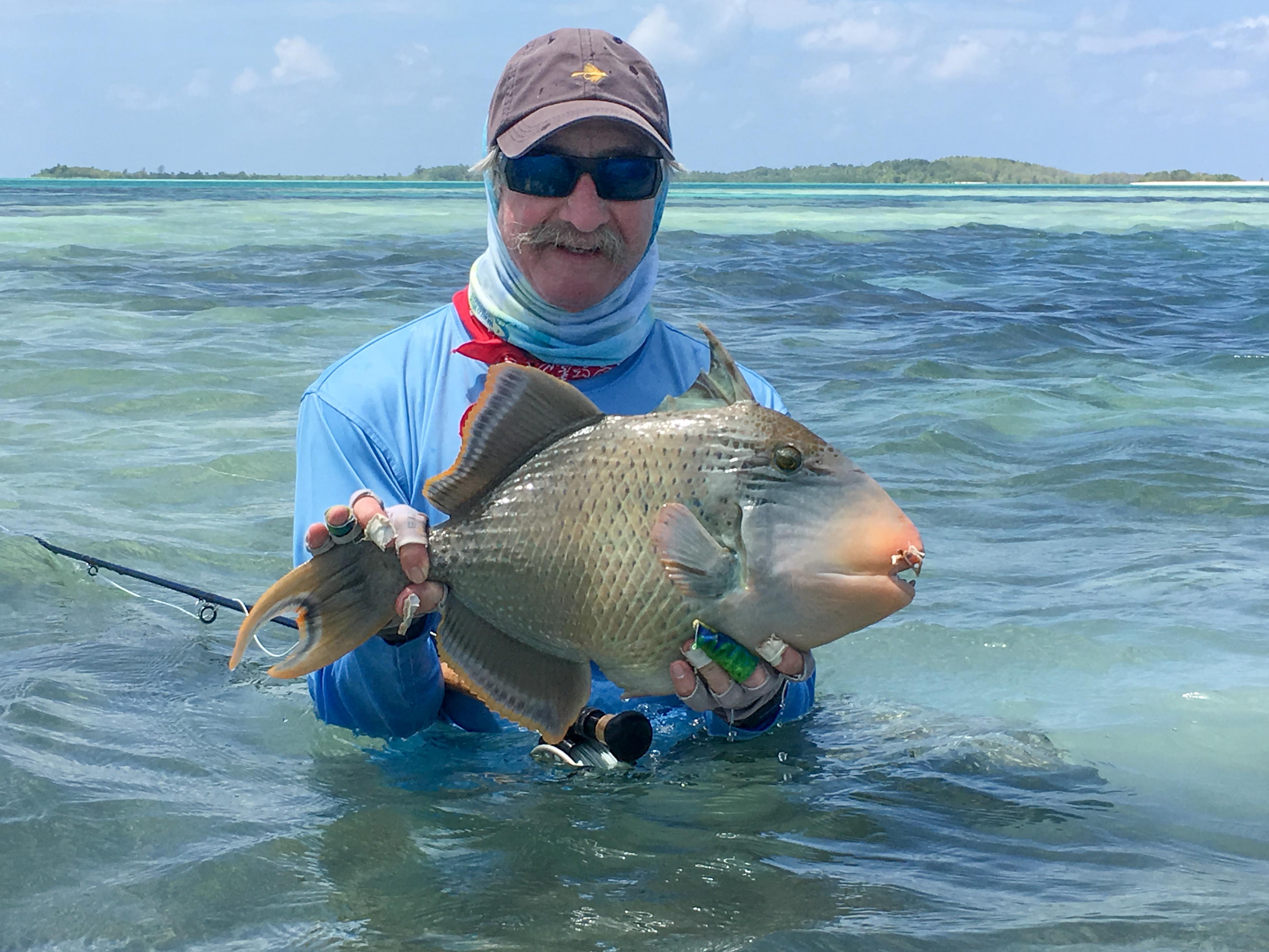 The GT fishing remained consistent around the outskirts of the lagoon with three being landed, two of which were caught by Steve Dutton at 80 and 70 cm. A ‘Flats Slam’ was accomplished by angler Berkley Dawson consisting of a bonefish, Moustache triggerfish and the holy grail of fly fishing a 50cm Indo-Pacific permit. 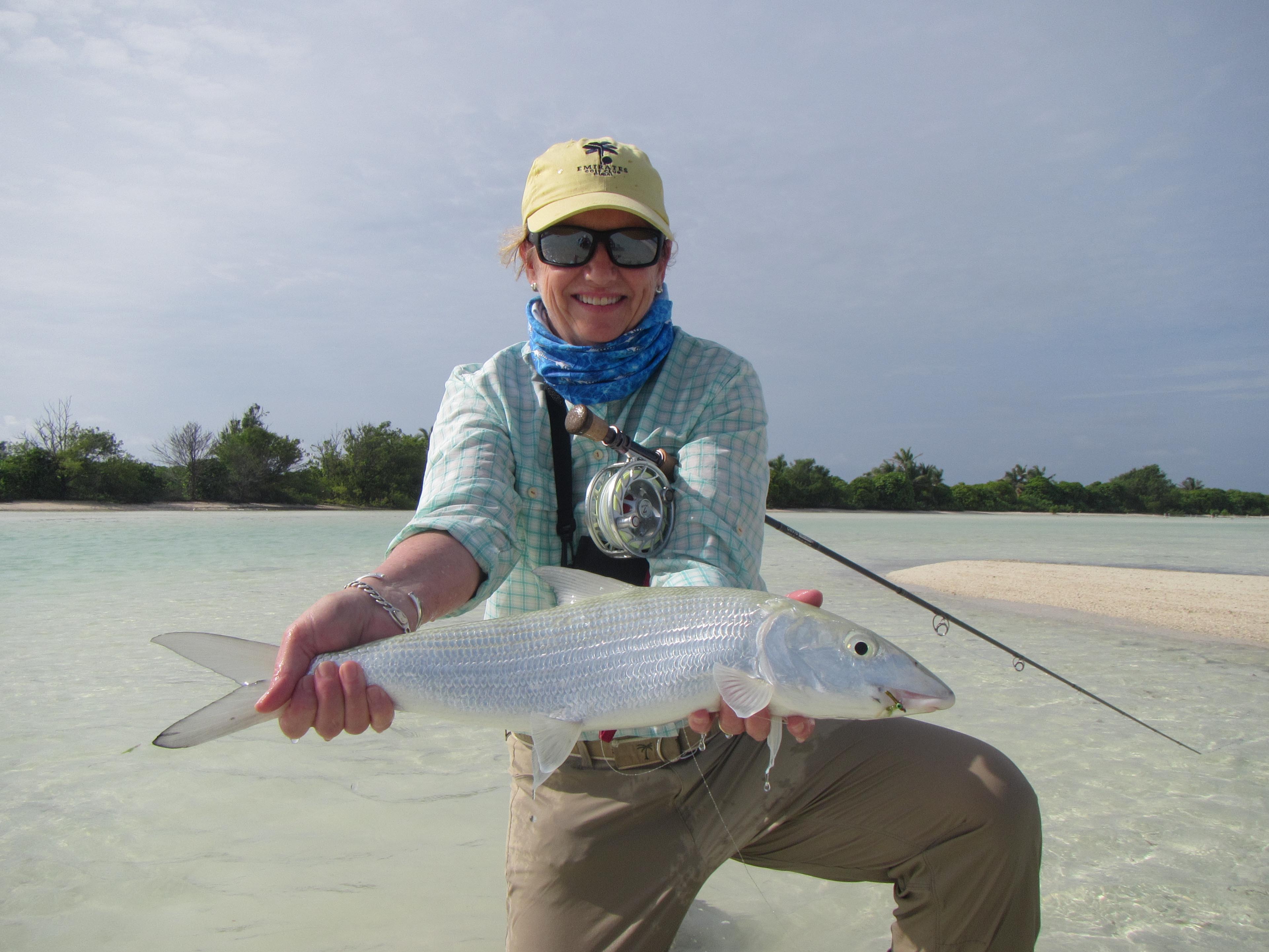 Many anglers chose to fish the blue water this week and were rewarded with some of the most exciting action. Four Sailfish and two Wahoo came alongside with the most notable mention being Steve, who during the fight with a sail had his rod come apart leaving him to essentially seal the deal with only the reel and butt section, luckily the fish was landed and the rod was recovered. Billy and Berkley both landed Sailfish and later hit the flats to successfully complete a double ‘Bills & Bones’ slam. Many excellent accomplishments occurred on the week so congrats and thanks to all the anglers for joining us at Alphonse. 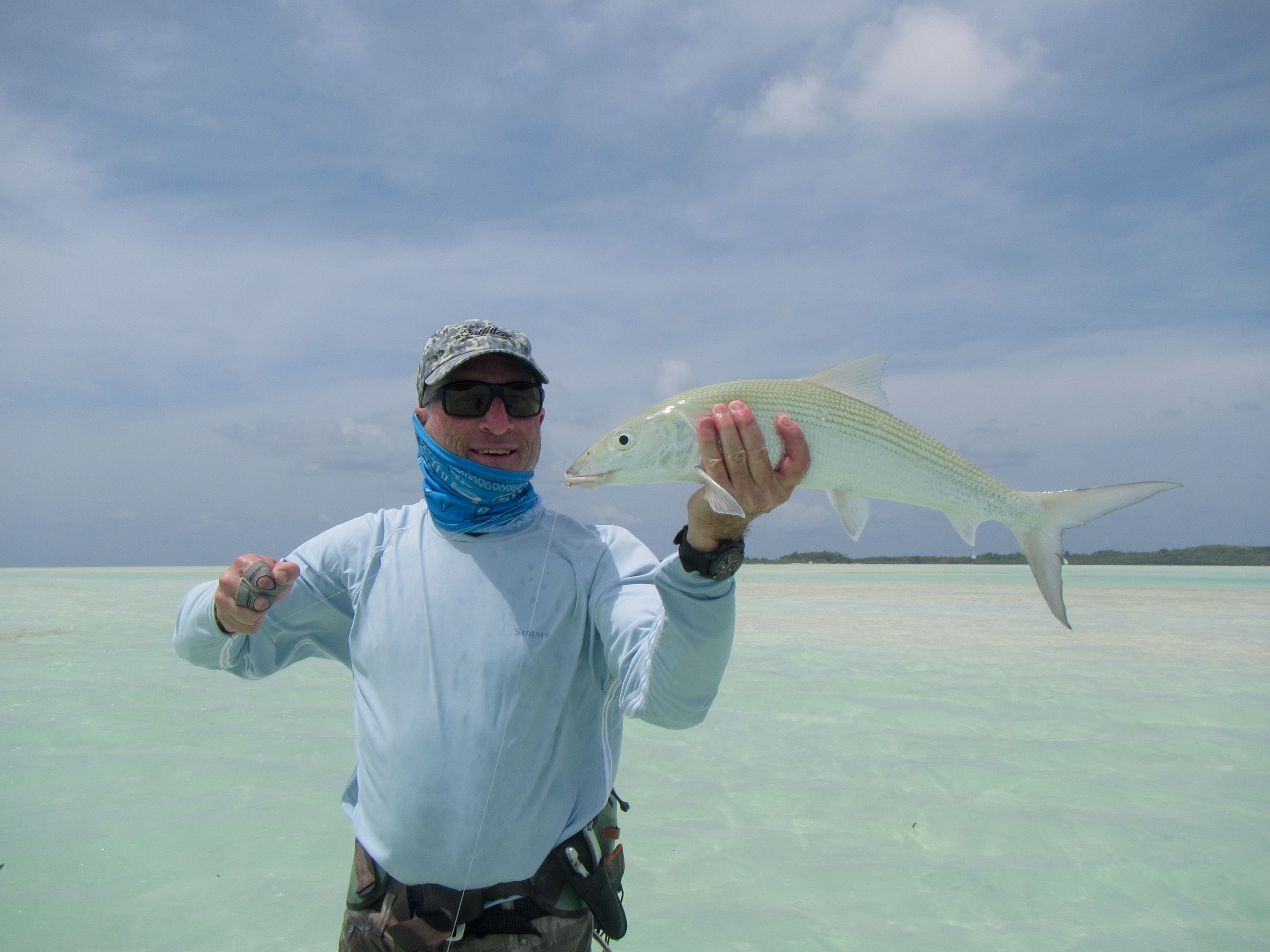