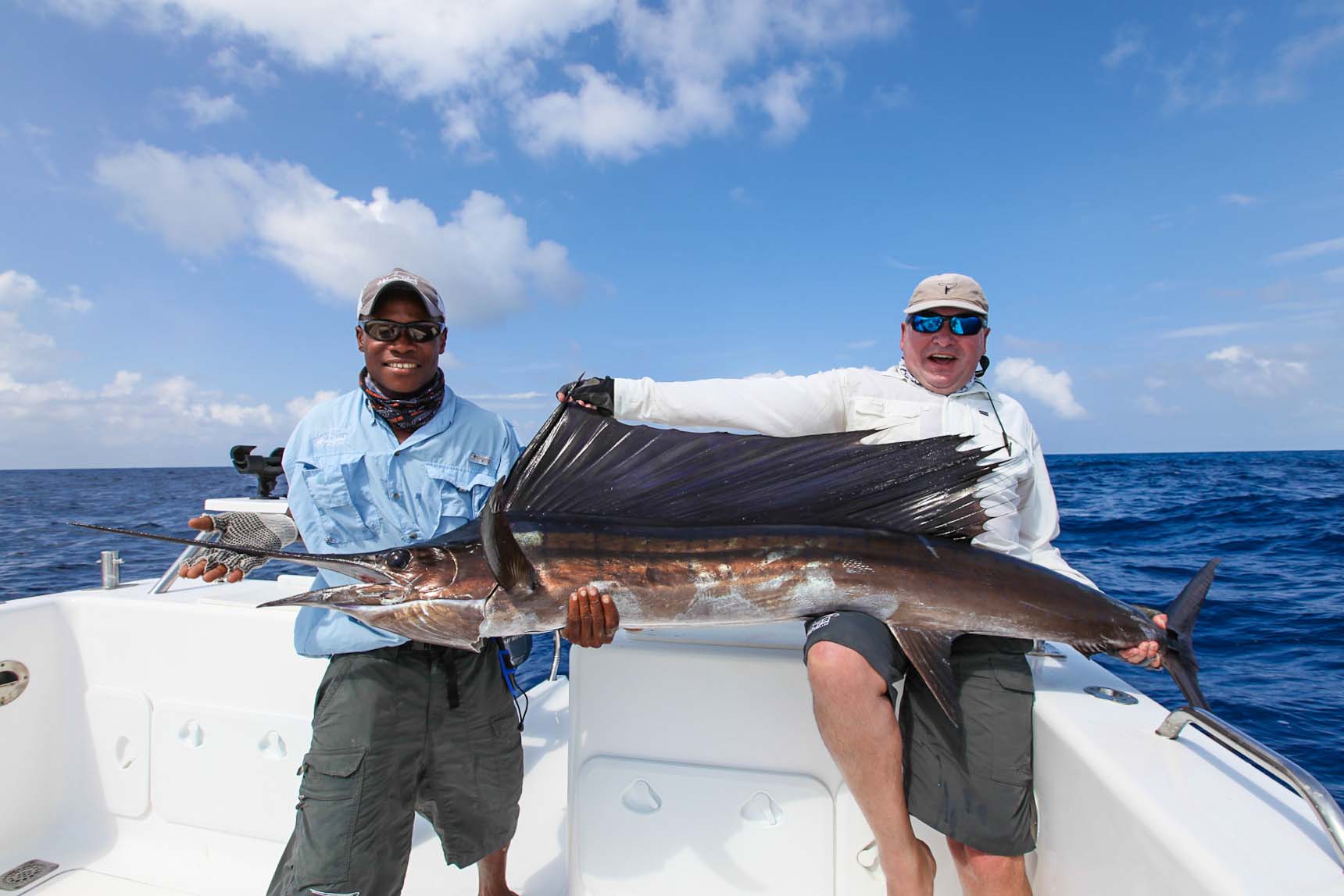 The mix of fishing, non-fishing, families and couples has added a new excitement to the evenings on Alphonse. The atmosphere in the bar and dining area has been electric with everyone discussing their sightings, snorkeling and fishing stories. The week was destined to be one full of memorable catches as we had some top rods on the island. 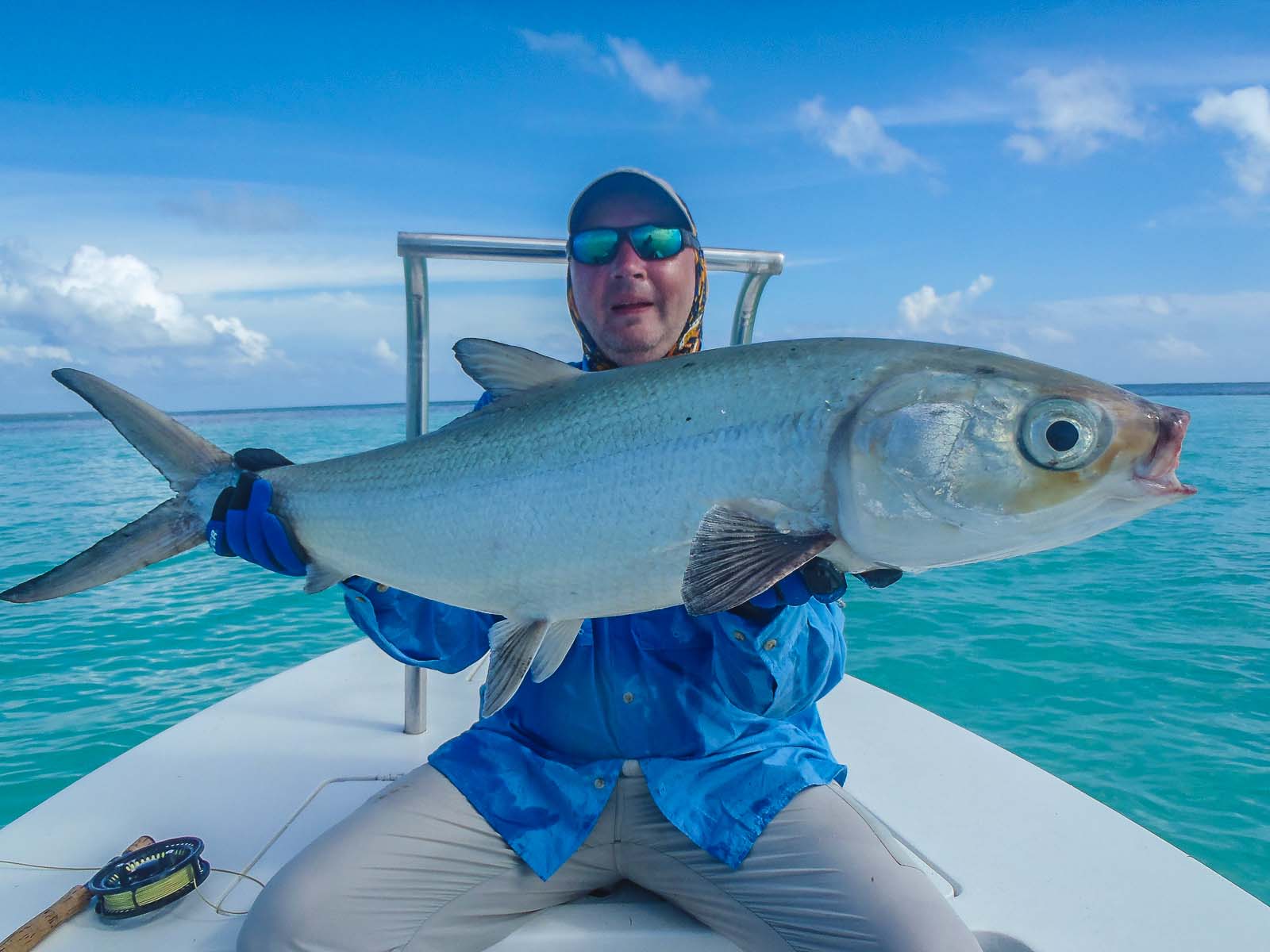 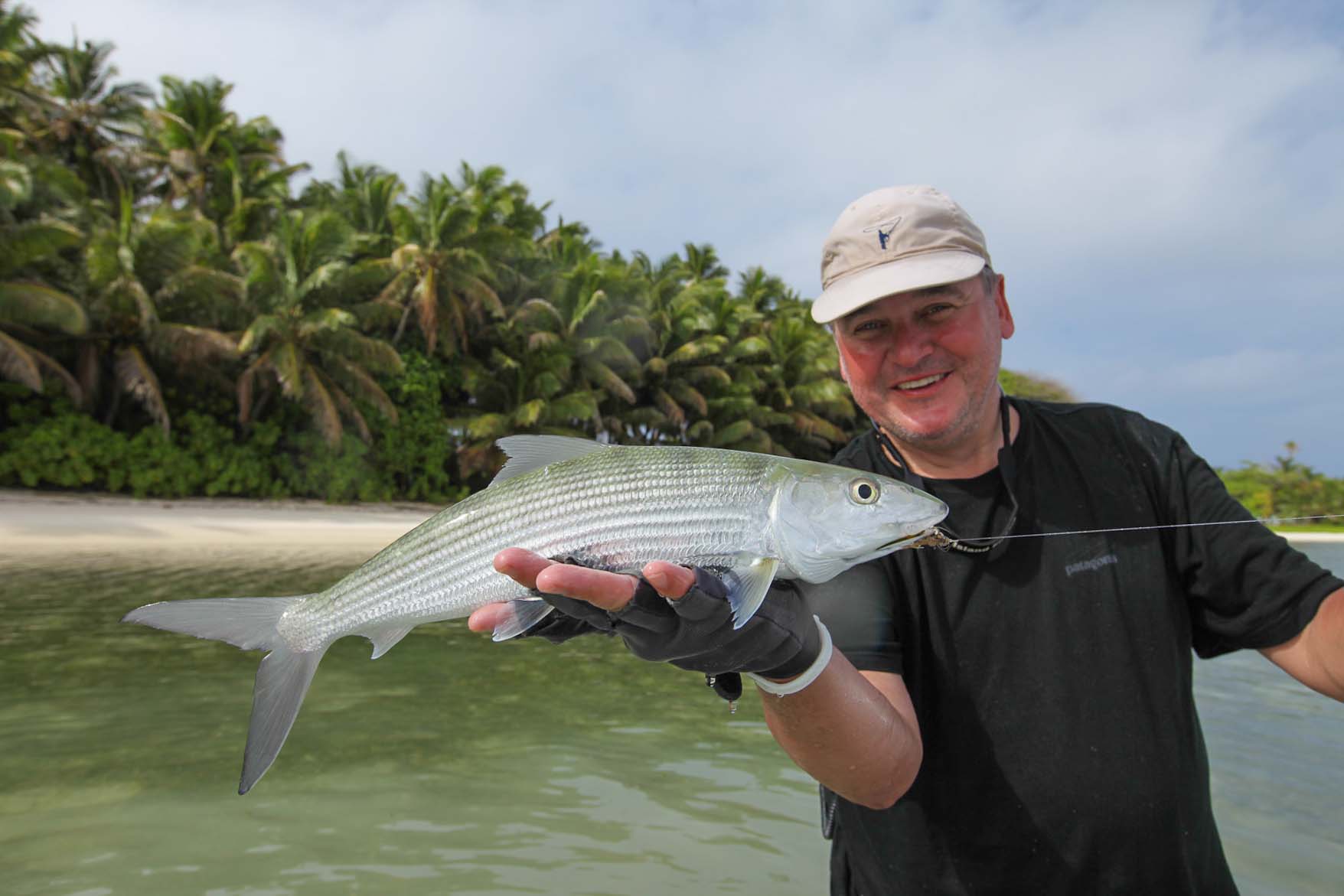 True to form, with the effect of spring tides, the milkfish showed up in their droves both in the lagoon and offshore. Stu Bird was quick off the mark in landing his first ever milkfish, which made him ask the question of whether or not he would like to catch another after a ferocious fight that left his arms feeling like jelly. He managed to overcome the urge to avoid milkfish and went on to land 3 more milkfish during the week. 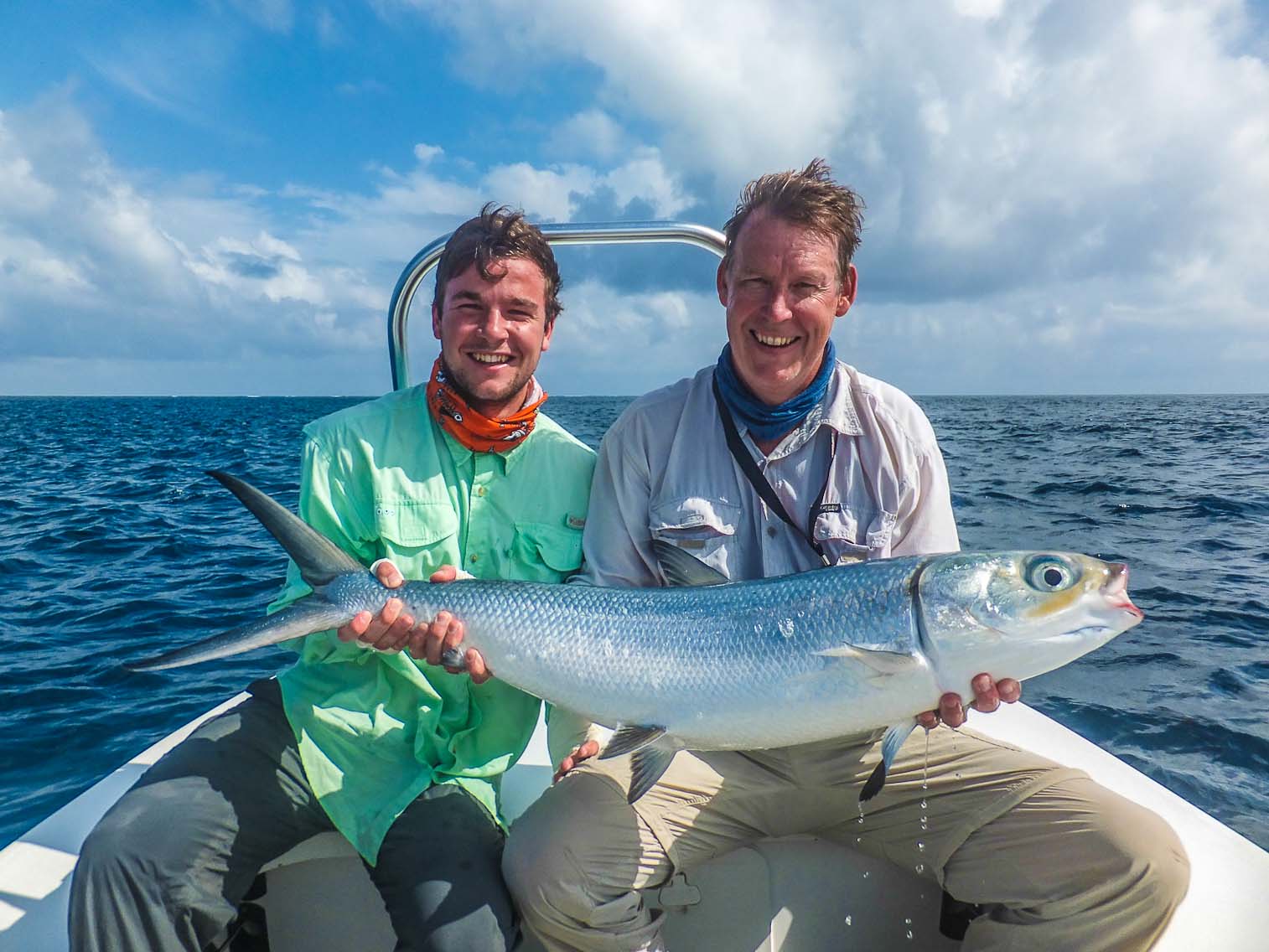 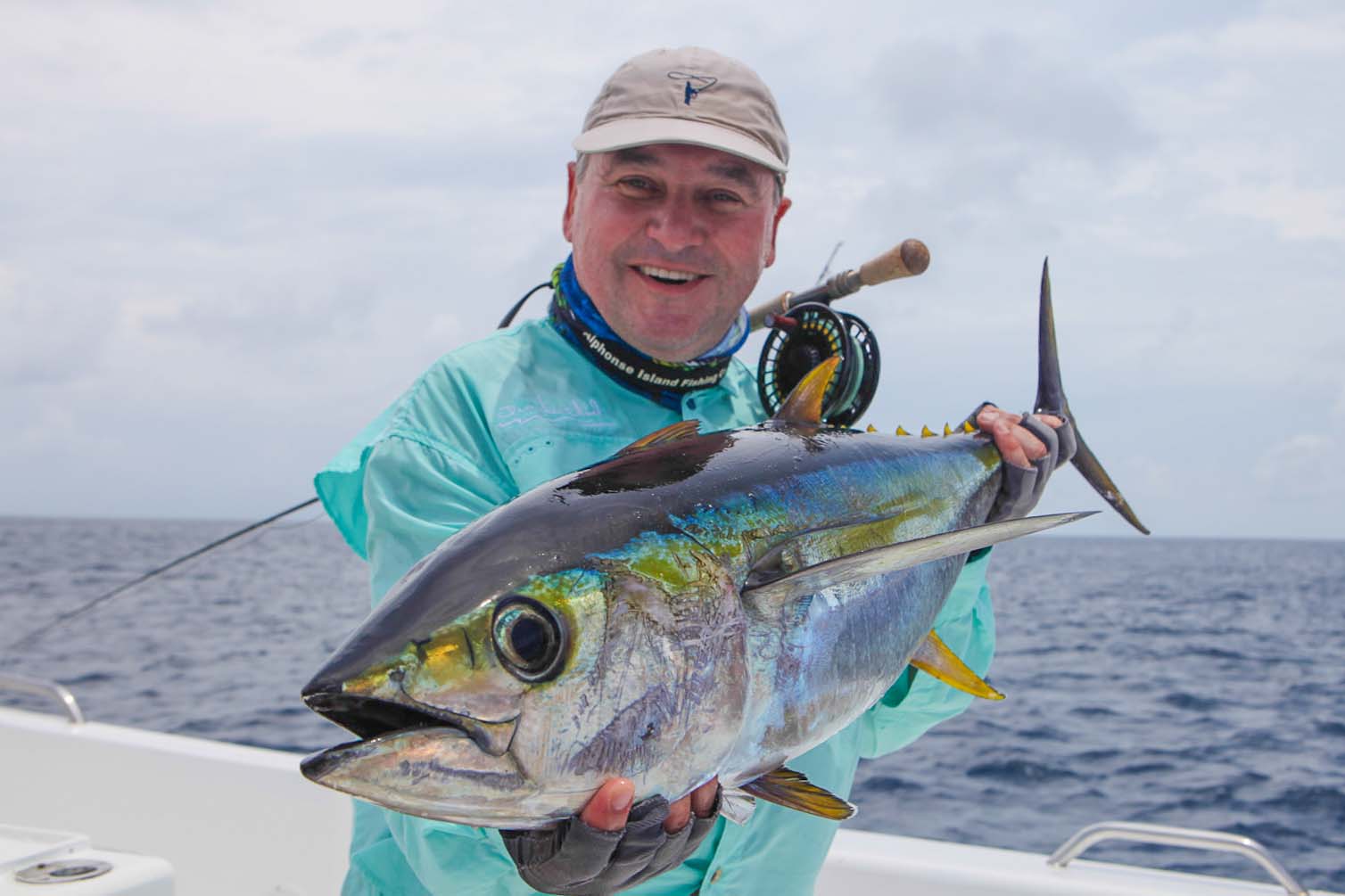 Mike Solomons also landed his first milkfish, which dragged him 6 km offshore with a spectacular aerial display that took 1 hour 45 minutes to land. The milkfish hung around all week with numerous anglers landing impressive fish. Mike Solomons went one better on day 2 with a nice 8 lbs permit, which fell prey to a well tied Pillow Talk (one of Wayne Hasleu’s). One of our finer bonefishermen and longtime guests John Dale caught his first triggerfish on fly and commented that the bonefishing was as fantastic as he can ever remember it. His wife, and fishing partner, Cheryl Dale landed a nice GT on an 8# and a bonefish fly, which was feeding on a Thornback Ray. 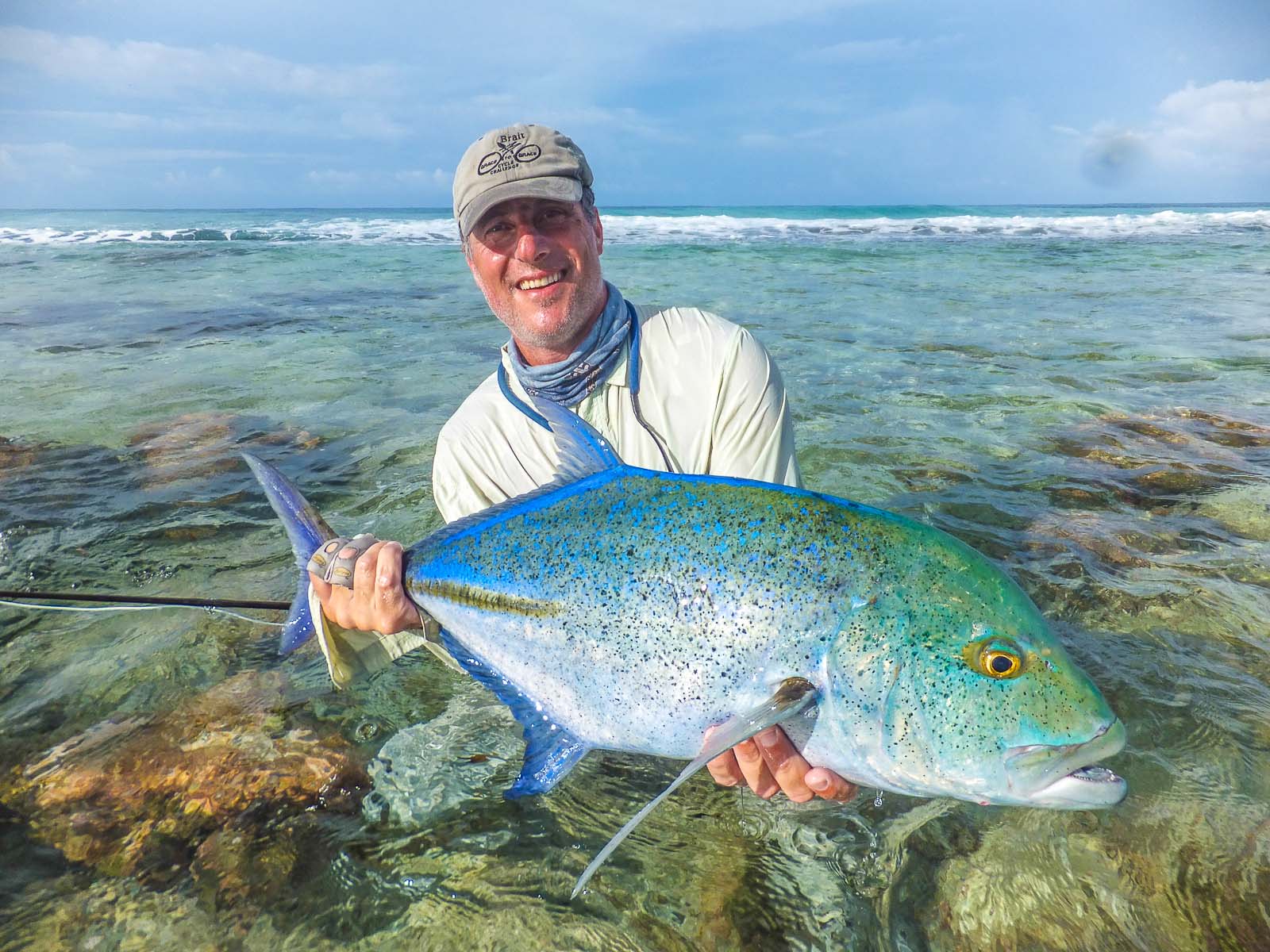 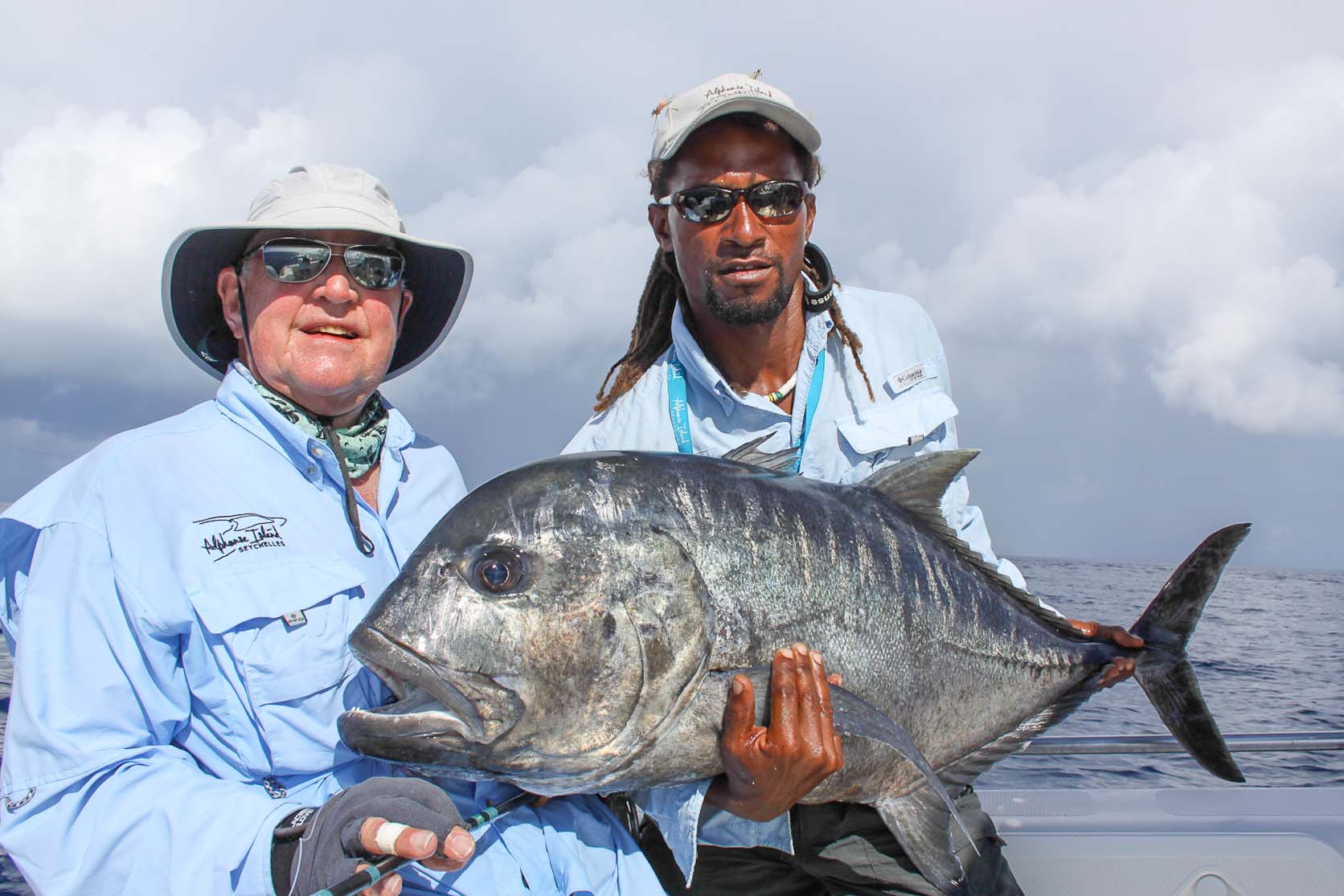 Sergey Kluev landed a triggerfish, milkfish and bonefish in one day, just falling short of a “Super Grand Slam” by not managing to get a GT. The offshore action has been frantic at times with large schools of swimming crab and prawns, causing mass feeding frenzies. 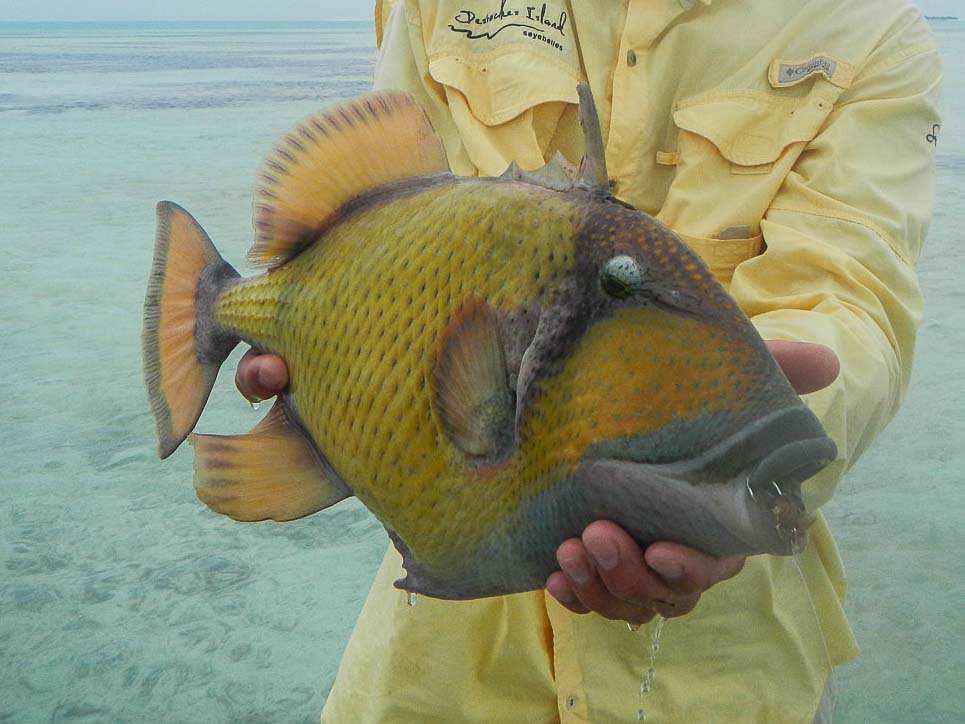 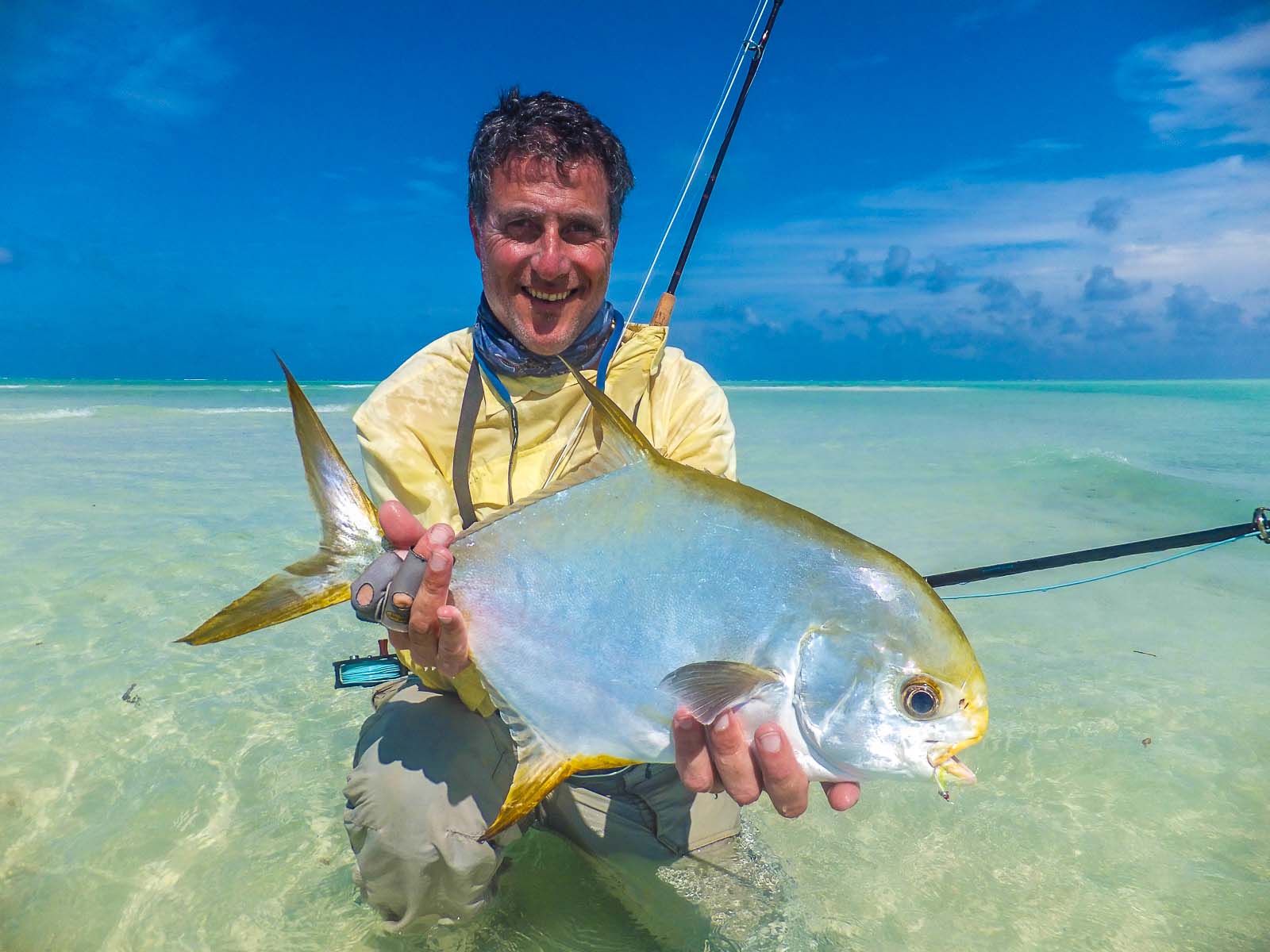 Vadim Titovetts was on the island to concentrate on Bluewater fly fishing and that’s what he did by landing 2 sailfish, numerous yellowfin tuna, wahoo, GT’s and dogtooth tuna. Robert Thomas landed 3 GT’s while fishing a new mound, which is slightly offshore and apparently covered in GT’s. David Carlin landed a 65 lbs GT and during the same session Staffan Simberg landed one of the bigger black jacks we have seen caught at Alphonse. 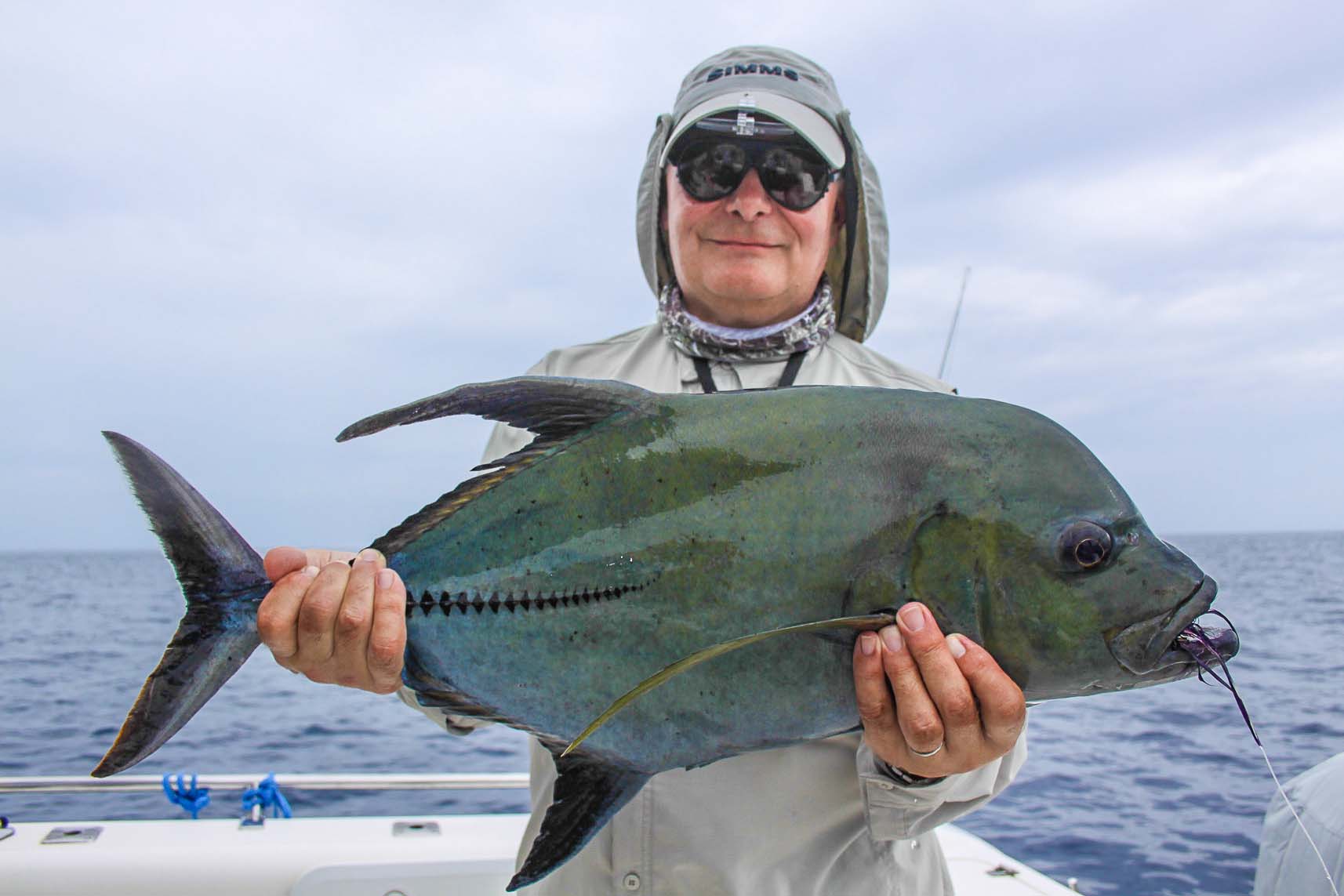 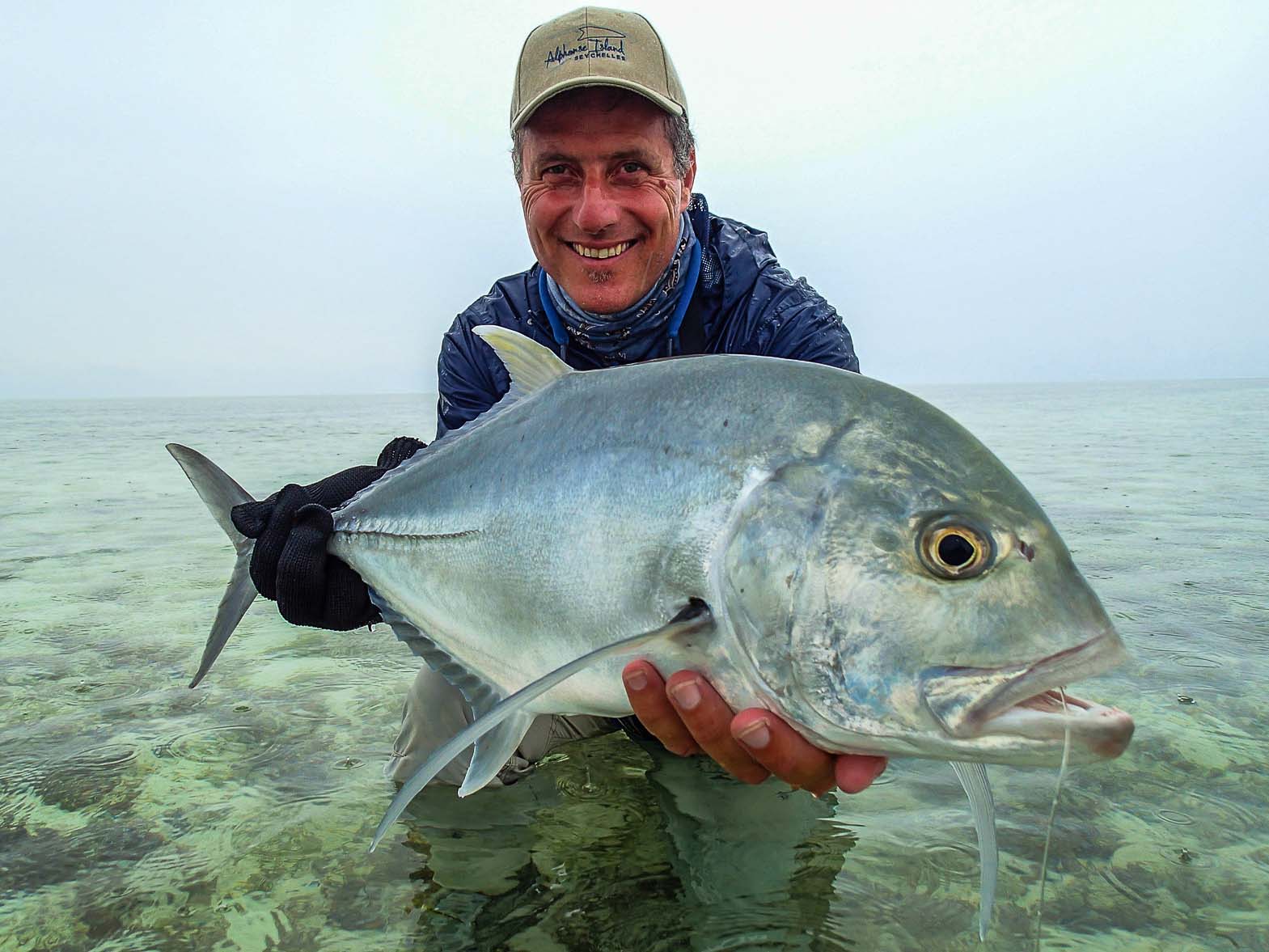 The last day ended with some amazing catches, some of which have never happened in the history Alphonse Island fishing. The fishing reports reads for 10 January 2014: “ The bonefishing was truly spectacular on both Alphonse and St Francois. The milkfish were around in their thousands to the South East of Alphonse.  Stu Bird landed a “Grand Slam” by catching a GT, milkfish and bonefish in one day.  Vadim managed the unthinkable when he landed a sailfish, milkfish, GT and bonefish in one day, achieving a “Super Grand Slam”. To date 1 angler has never landed a milkfish and sailfish on the same day, not to mention a GT and bonefish.”

What a way to end a most memorable week. 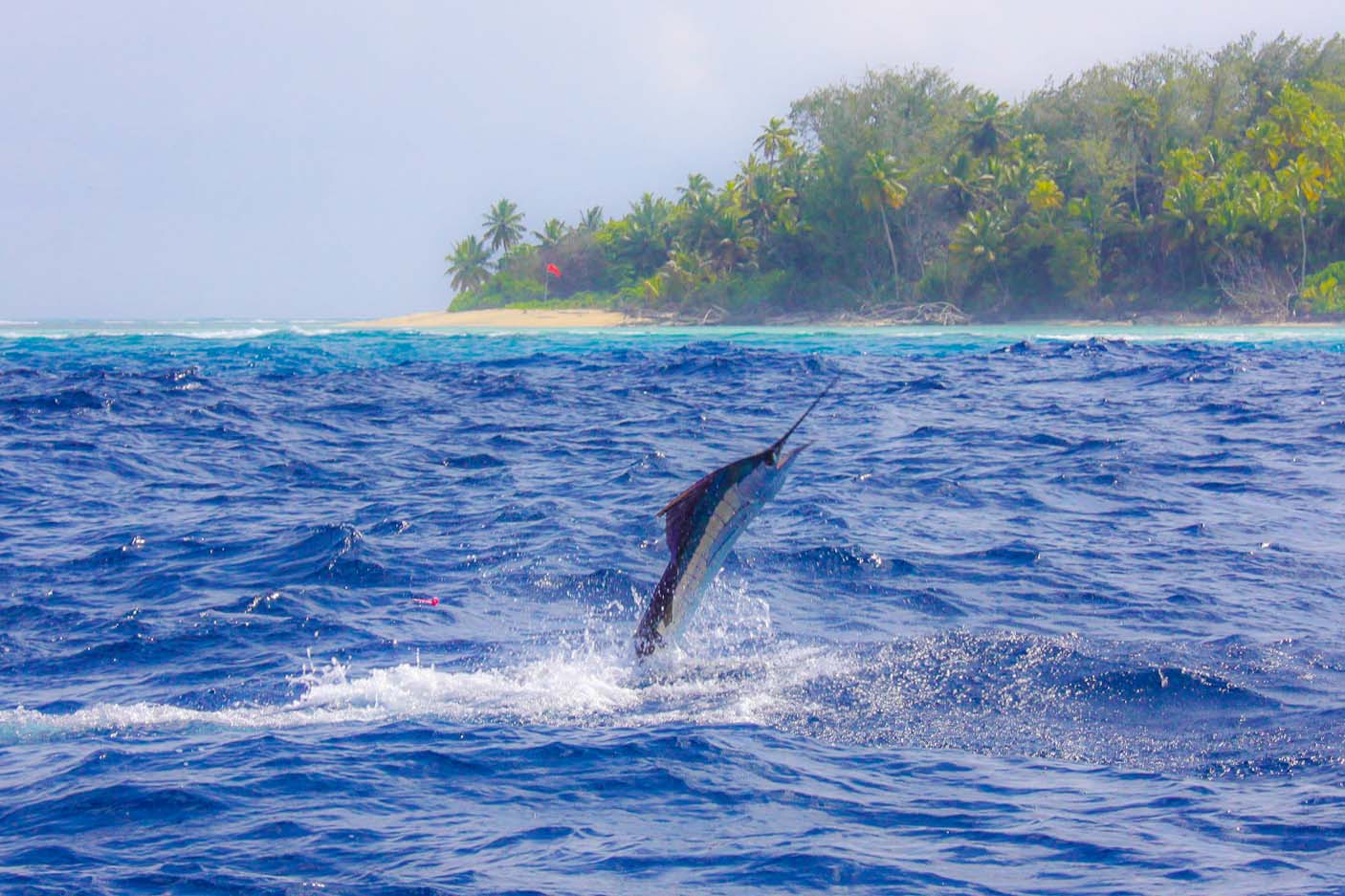