I was intrigued from the beginning by milkfish; listening to tales in the office of fish won and lost. All  I heard was how hard they fought. How they never gave up and didn’t tire as they don’t generate a lactic acid build up. I heard tales of long of and brutal battles. Did I think I’d ever land one? No. I was proved wrong one December, not once but twice and in such different circumstances you could easily be forgiven for not believing both fish were landed the same week so below. 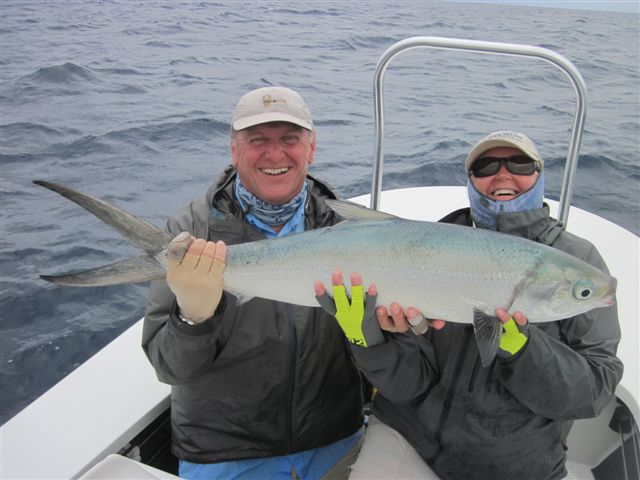 The first milkfish I landed was on the flats, on a calm, clear day. I’d like to say that I landed my second milkfish on an equally beautiful day… but I’d be lying. In complete contrast to earlier in the week, dark clouds gathered beyond the reef and the rain was light but persistent as we headed out in search of milkfish.

Visibility was appalling and the swells smooth but not inconsiderable. The milkfish were there in huge numbers and they were feeding. Some sub surface but most feeding right up on the surface; it was a seemingly endless stream of sipping mouths. I am incredibly clumsy so perching on the front of a skiff, amidst huge rollers had all the makings of a Chilcott epic disaster. More focused on not falling off than anything else, I cast and stripped and with an almighty hit and Wayne shouting ‘set it, set it, set it’ with increasing shrillness, I watched my fly line vanish in a heartbeat. Then the backing began to run and run … and run. A vibrant pink, the backing was a frighteningly long away from me and when the fish jumped for the first time it cleared the surface 90° to where the backing disappeared in the water. We caused chaos for my fellow anglers as we weaved amongst their skiffs in pursuit and I suddenly realised that I was in serious danger of being spooled. My 350 meters of backing was pretty much all out.

Devan later told me that all they could see through the gloom was the lime green of my gloves flashing as I frantically tried to get line back. One minute I was winding uphill and the next I was looking down into the abyss as we crested another huge roller. The bright pink backing was a blessing in the greyness and I went down to the backing a second, third, fourth time. It seemed like a lifetime.

1 hour 15 minutes after that first cast, my milkfish came to the boat. It may have been in the net but it was I who was beaten; the milkfish was just having a breather. Roger had to take charge of the tail because I just couldn’t hold it. My hand was too small to get purchase on the wrist and, like Samson post haircut, I had no power. The milkfish on the other hand was raring to go and with one kick of that beautiful, scimitar tail, it swam off, showering us dismissively with water as it went.

A memory for a lifetime and a very decent fish; somewhere I have the measurements to calculate the weight but as neither Roger or I could be classed as petite, that should give you a sense of scale.

The most recent Alphonse Island update is online HERE

For the most recent blog from St Brandon’s, Mauritus please click HERE