If last year’s low and clear opening-week water levels were surprising, this year’s high water has been even more shocking. It’s been several years since we’ve seen early season conditions like this, which have made for some interesting fishing. 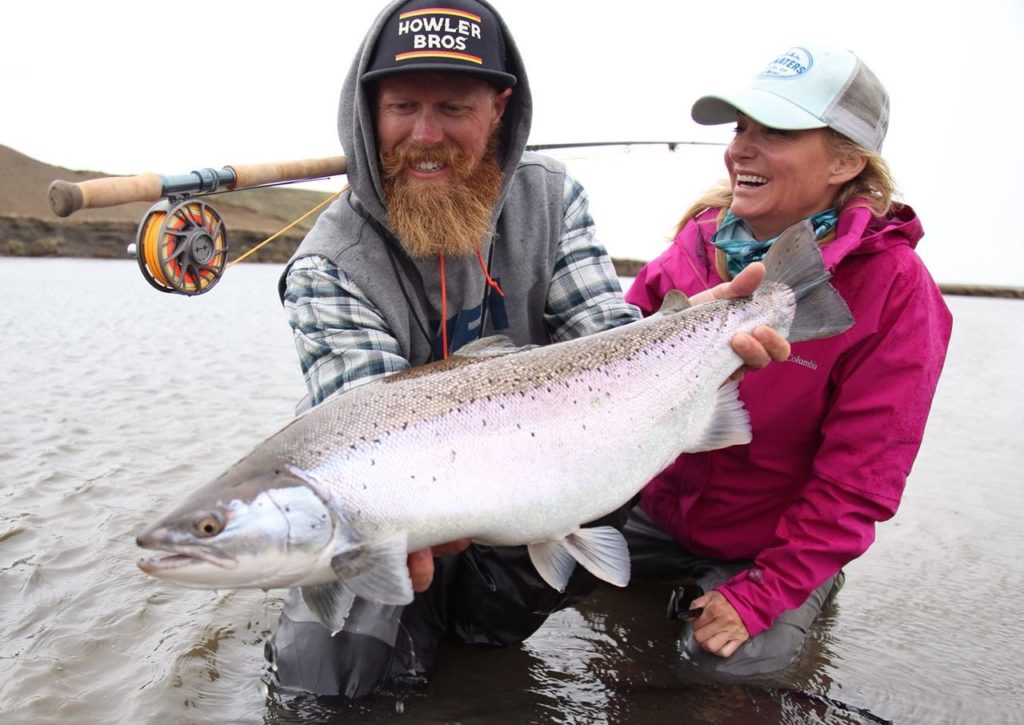 High water gives sea-run browns more room to spread out and to move quickly upstream. And that, combined with off-color flows coming in from tributaries such as the Rio Menendez, has been the biggest challenge.

But being anglers, we appreciate the problem-solving elements that changing conditions present. We try different spots. We fish different depths. And we vary the speed of our presentations in order to get it right. So far we’ve found most of our success in shallower riffles, with a medium to slow water speed.

Variable, gusty winds and the roiling water demanded the kind of horsepower that only two-handed rods can provide. We also fished an array of lines, from full floaters to heavy sinking tips, in order to find the best setups for each spot. Even though some fish were caught using nymphs, large streamers produced the most consistent results. Leeches, Intruders, and classic tubes, especially if they were tied in black, all had their moments.

Fish are moving fast upstream, and an empty pool in the morning could be full in the afternoon. By the end of the week, the showers stopped and the river dropped fast and steady. Dry days in the upcoming forecast will bring a completely new fishing scenario. Game on!

Since last week, the river is down and its clarity is getting better by the day. This means that the wading is easier, but more importantly we’re seeing a return to the softer water speeds that allow sea-run browns to start settling into their usual spots. 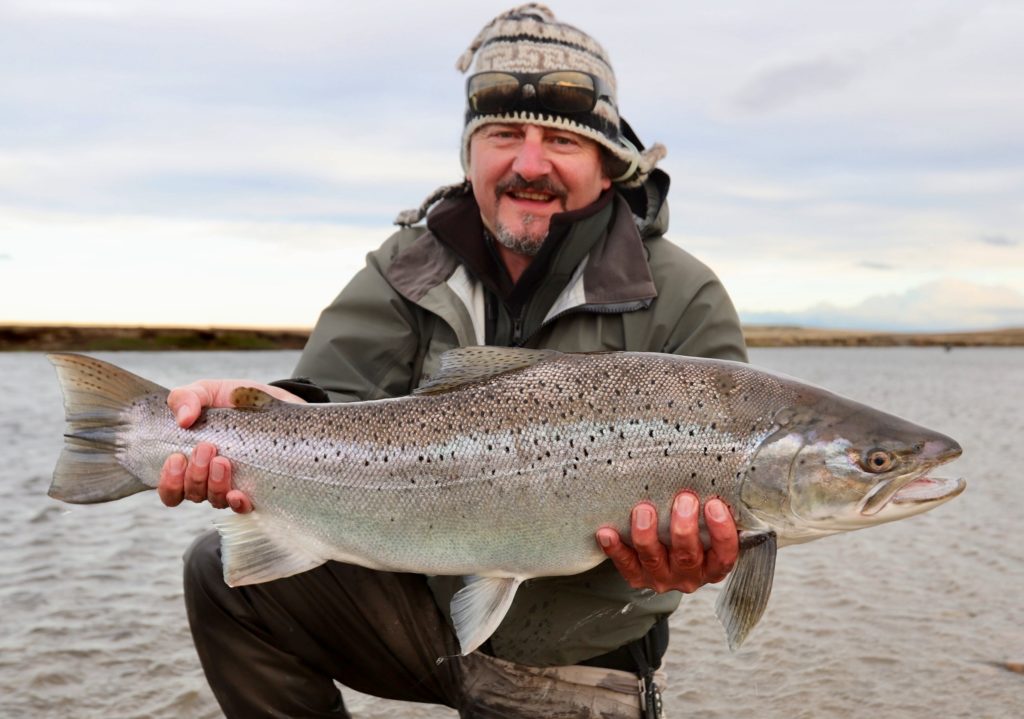 The week started with two days of high wind, gusting up to 90km/h (60 mph), which made for some difficult casting. After that, the weather got nice and the fishing improved exponentially.

We found fresh fish in different pools. They were not easy to fool if they were not in schools. These early season fish don’t waste a lot of time milling around in one run; they move fast and, if the river is high, they move even faster. Therefore, you have to be smart when planning your fishing sessions. In other words, what you saw in the morning, in one zone, can be absolutely different in that same zone in the evening.

Tackle wise, we had some good action fishing subsurface flies on intermediate tips. We also did well with bigger streamers fished on heavier sinking lines. So, depending on the pool, fish behavior, and water speed we mixed it up accordingly to come up with the best combo of line+fly.

By the end of the week the river had dropped 8 inches. The forecast showing dry weather for the next several days, so the conditions should continue to improve.

The river has come into prime condition, a very comfortable level for fishing, and the clarity is about as good as it gets. The water level has continued to drop throughout the week making the fishing even more enjoyable. Wading has became super easy and casting can be short and precise. 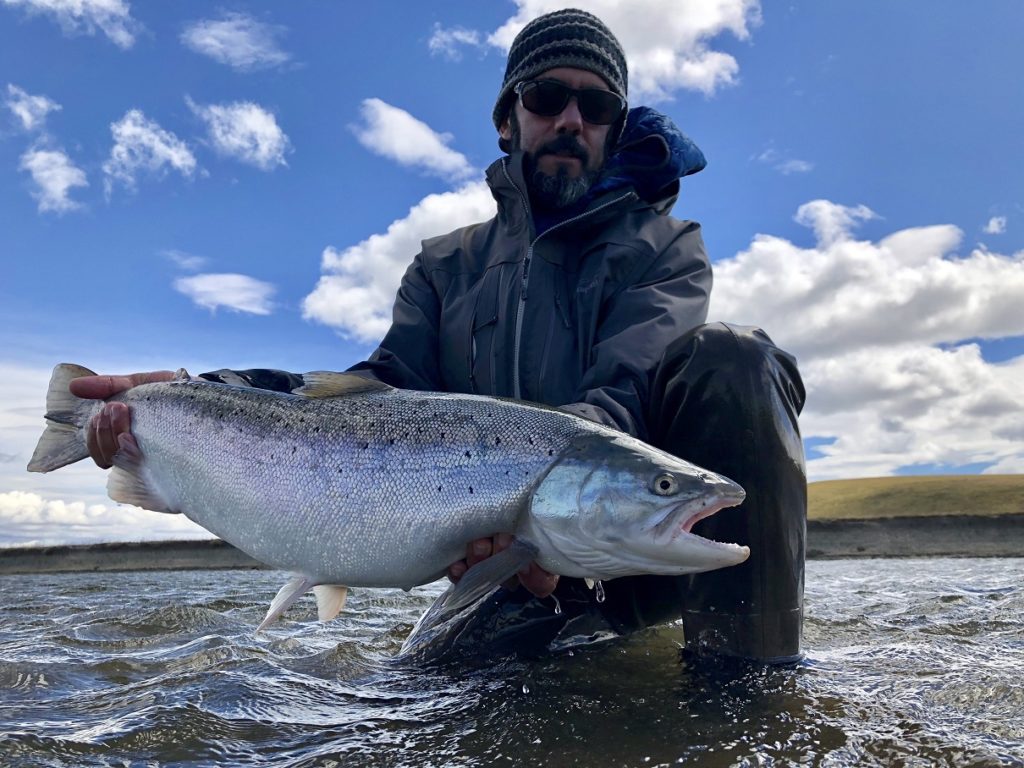 We had relatively cool temperatures to start the week, followed by unusually warm weather during the last two days. This caused water temperatures to be a little unstable. Due to the Rio Grande being a relatively shallow stream, the water typically cools overnight and warms up all the way till 4 pm. But this past week the swings between the highs and lows were huge. We recorded 7 degrees Celsius at its coldest, and 14 degrees Celsius at its warmest. Because of that, you have to be careful to choose the correct line + fly combination

The usual Tierra Del Fuego westerly blew throughout the week, with winds blowing more from the north on occasion. The northerlies bought some scattered rain showers that passed quickly over us. Most mornings were sunny with clear skies, while the afternoons became overcast, making for great evening fishing conditions.

With the clear water and dropping water levels we were able to fish smaller flies such as nymphs and green machines. The green machine was the fly of the week, while a few rubber-leg patterns such as the EMB produced results as well. The sunray shadow was another fly that made for some good and exciting fishing close to the surface.

As for rigs, there was no standard recipe. Usually starting with an intermediate tip is the best call, and according to fish’s reaction (or lack of it), we’ll try heavier tips on each pass.

The run of fish looks like it has started to be more solid and more predictable, and as the river is getting lower the speed of the fish running upstream seems to be slower in comparison to 10 days ago. This makes finding fish in their usual spots a little easier, and I like that a lot!

The season is just starting and everything is getting better week after week! 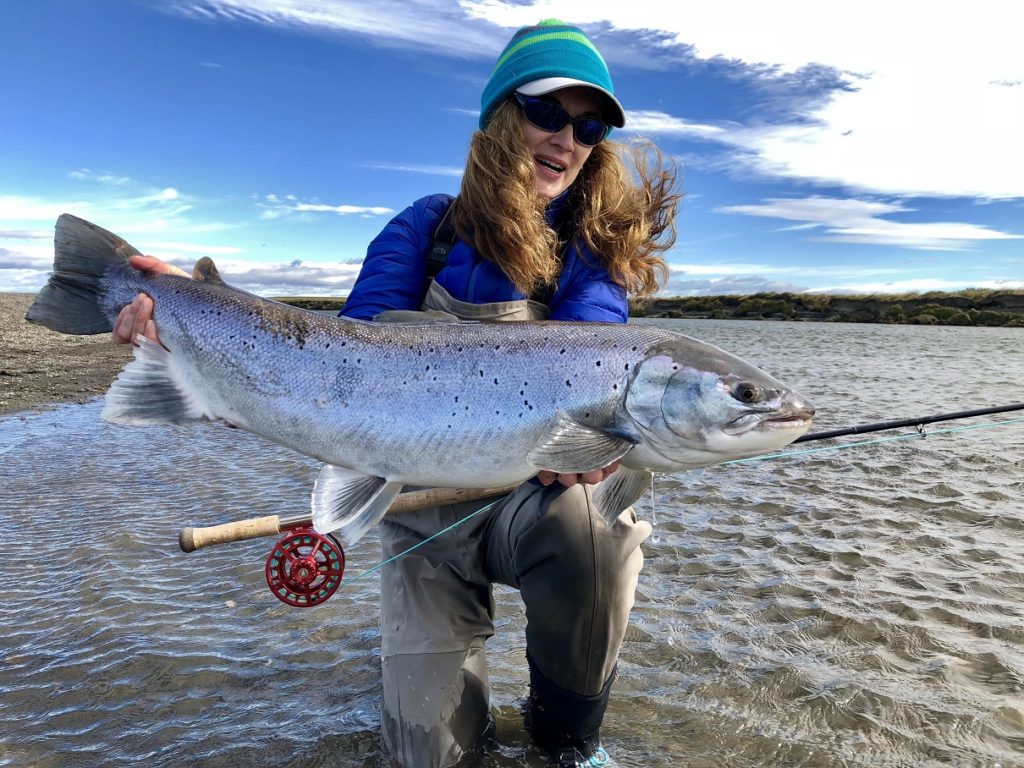 Similar to what we’ve seen the past two weeks, the river remains low, clear and in fantastic shape! We’ve also been experiencing a return to some classic January weather: warm, dry, bright sun and high winds.

Stable river levels and consistent weather patterns present the perfect conditions for fish to run and take flies. And that has been happening through the entire week.

We’ve seen small but continuous runs of fish entering from the sea. They move fast, even under bright sunshine, so finding them can be an exercise in patience. And once they’ve been found, they’re soon on the move again.

Fishing wise, the best flies for clear and low conditions on the Rio Grande include the usual suspects. Small nymph and rubber-leg patterns, as well as dry flies (!) have been key to seducing these skittish silvery creatures. Fishing light sink-tips and long leaders also helps. Personally, I’ve been dropping the diameter of the tippets and, on several occasions, I’ve gone as light as 8 lbs test.

So far everything is looking promising for the week ahead. We expect to see more fresh fish moving into the system, making the fishing better and better every day. 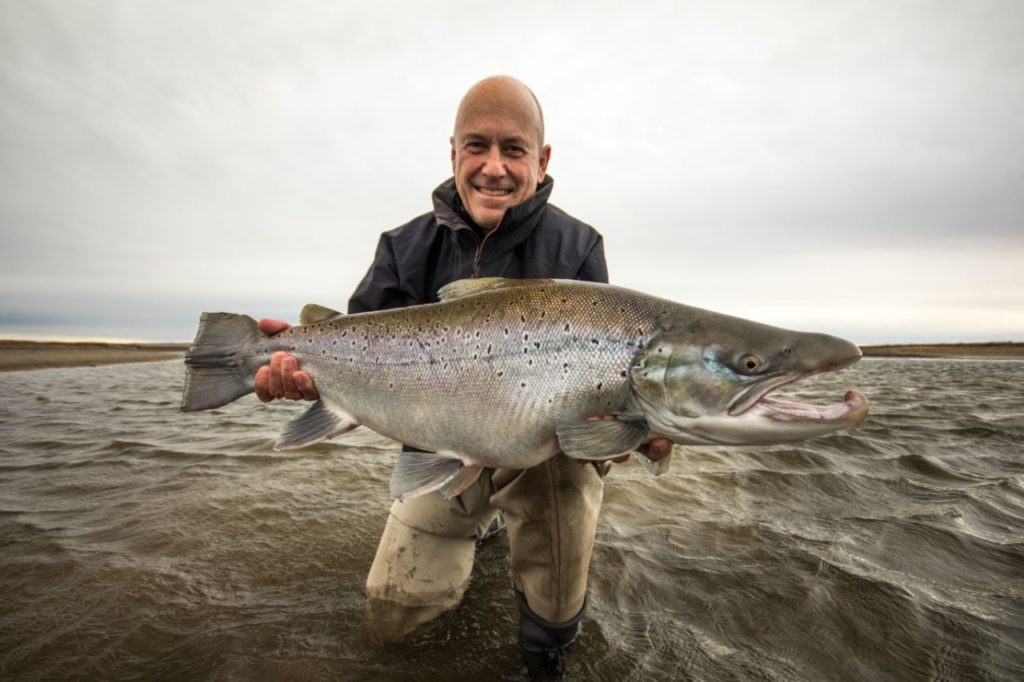 This past week we hosted a great group of Swiss, American, and British anglers. It was a mix that included first-timers, second-timers, and long-time friends. And, luckily, the fishing was in tune with all the fun. It was, so far, the most productive week of the season.

Our typical warm, windy summer weather prevailed. The conditions provided generally good fishing through the day, followed by some peaks in activity during the twilight hours. But there were some exceptions to the rule. Interestingly, we had a full moon this week coupled with some clear, bright nights when the fish were less active during the “magic hour”.

When the bite was on, however, a variety of flies proved to be successful. We skated dries, swung nymphs high in the water column, dredged a few pools with tiny flies, and used more traditional Rio Grande-style streamers where and when applicable. Everything seemed to work when fished properly!

It was a similar story for fly lines. Everything from full floaters to short sinking tips had their moments of glory. And as always, good presentations and proper drifts helped ensure success.

As noted, most of the small flies worked fine, but rubber-legged nymphs were the best options coming out of the fly boxes. Green machines were good too, for fooling picky sea-run browns. Leeches, as per usual, prevailed at dark.

We’ve welcomed some old friends and made some new ones at Villa Maria during the past couple weeks, with a global mix of guests from Denmark, Iceland, the U.K., and the U.S. Rafn, Jonni and Magnus from Iceland showed us how keen they were to get on the water by wasting no time to dive into a warm-up session. Their excitement convinced the rest of the group to temporarily retire their Gin and Tonics and immediately hit the river shortly after arriving at the Estancia.

The season has started to swing into autumn in Tierra del Fuego. Indicators of the shift taking place include birds gathering in big groups on the banks of the river, with the ducks on the pond, the ibis, the geese and tero (Southern Lapwing) all getting ready to fly north for winter. The arrival of flamingos seemed to be a good omen. They swooped in one by one, and there are now about eight birds wading the small spring-fed lake that we drive past to get to the river each morning.

As the days become shorter, the nights have become cooler—thus the morning fishing has become slower. Our afternoon and evening sessions have been substantially better for us. This turn of events allowed our Icelandic friends to watch the European Champions League football in the River House before heading out to fish the best hours of the day. The past two weeks have been windy, to say the least; with speeds cranking up to 90km/h, churning up river sediment and making fishing conditions tricky. While some guests chose to skip the blustery morning sessions, King Louis, from the U.K., wasn’t one of them. This brave soul also sipped his lunchtime G&T while sporting his cap that read, “Single Spey, Double Gin”.

In addition to wind, we had some rain that caused the river to come up about 3 inches, relatively quickly. It dropped a few days later, moving a few fish around. The spike in flows added some colour to the Rio Grande, but the fish didn’t seem to mind. And during the past two weeks we’ve had some amazing fishing.

Before the rain hit we had two back-to-back 20+ fish days. More recently, Seth from the U.S., on his first trip to Tierra del Fuego, landed the most impressive fish of the season: a stacked 24-pounder. He shared the moment with his mother, Ginny, who simultaneously hooked and landed an impressive 16-pounder. These beautiful fish filled the net at the last minute of the last session of the week, before we headed back to the lodge for an evening of tapas.