Week; 6-13th March
We just finished another “tempestuous weather” week! The wind and large temperature variations across the days made this week quite particularly challenging in that aspect. Winds up to 60mph and near freezing temperatures overnight were the main challenges to defeat.

But with patience and between wine talks, jokes, and hard work we enjoyed great success.

Similar to the last couple of weeks, we had a few hours of rain that bumped up the water level a couple of centimeters. Even when it still looks like too little to make a difference, that event stirs things up.

There was no a pattern of behavior of fish preferring one fly over another. In one pool someone was catching on green machines and in the next one below, on collie dog tubes. Even leeches were good on some cold mornings and when the fish were not moving to anything else.

Regarding lines, skaggit lines with short sink tips were the best options, as usual. Floating and intermediates lines saw a lot of action this week with great success when fished teamed with a Sunray shadow style tube. 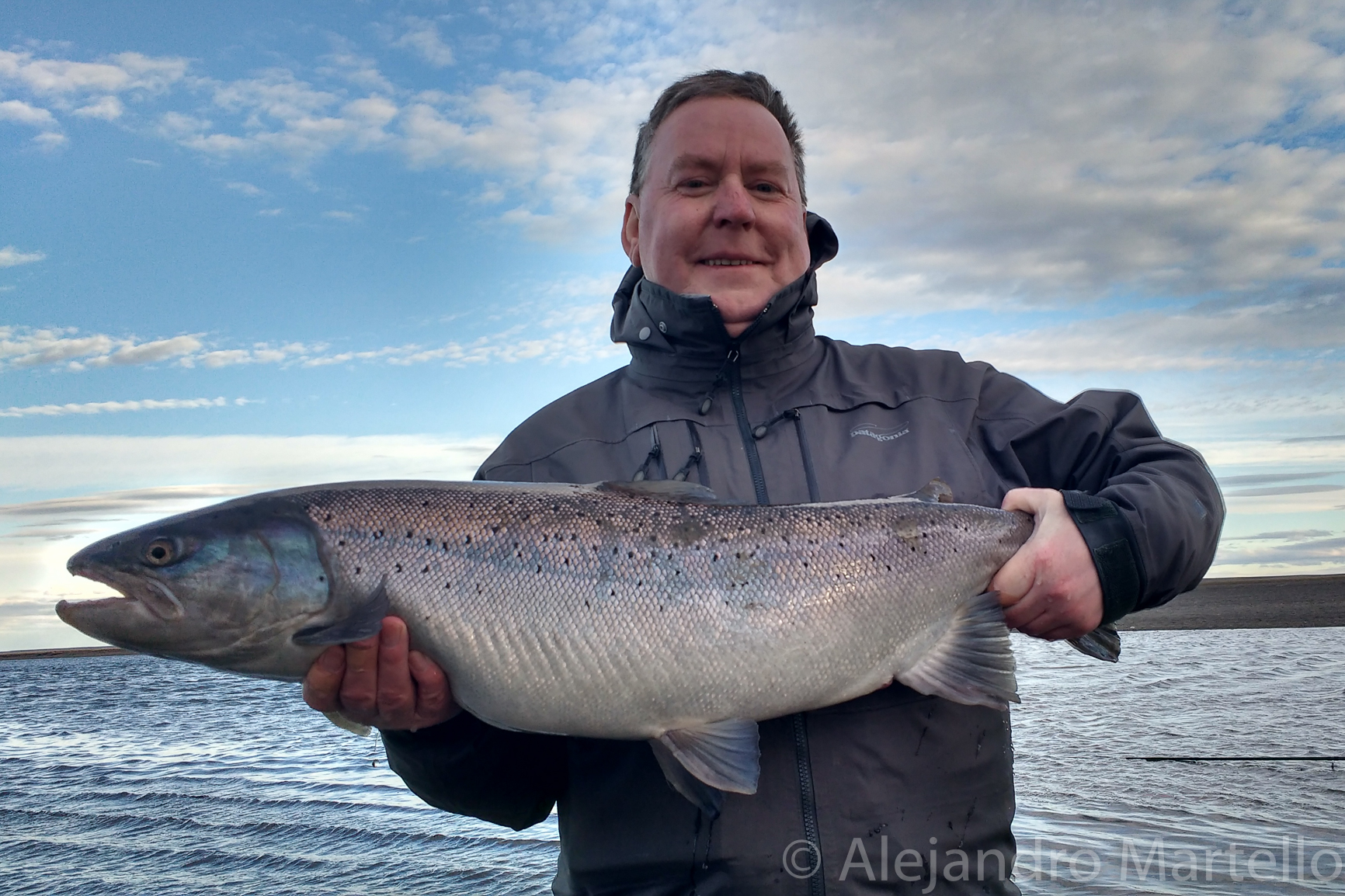 Looks like rain is the big absent this summer on the Rio Grande. The river remains very low and clear, but it’s still delivering the best sea-run brown trout fishing on the planet!

Light rain last week bumped water levels by less than an inch. That doesn’t sound like much, but the fish feel the difference and react accordingly—charging upstream or changing positions in the pools. The group of return anglers we had knew the drill and how to properly adapt to the ever-so-slight changes. Faced with low water, relatively strong winds, and cool temperatures—dropping all the way to 3-degrees C at night—they found success.

The “Best New Entrance Award” goes to Ingve, our Icelandic pal who during his first Rio Grande tour hooked and landed a superb 24-pound buck! But that wasn’t the only big fish of the week; everyone in the group landed at least one fish over 20 pounds, with Neil scoring his at week’s end—right before the buzzer!

Again, we dabbled with a variety of flies for best results across changing light, temperature, and time-of-day conditions. Summertime staples like small nymphs and green machines performed somewhat better than others. And leeches remain the almighty option in low-light conditions.

Regarding lines: Skagit heads with short sink-tips have been the go-to option. Although, floating and intermediates lines saw a lot of action this week—and success. The group also enjoyed using ultra-light switch rods, so it was fun dealing with some monsters that the river kicked their way. 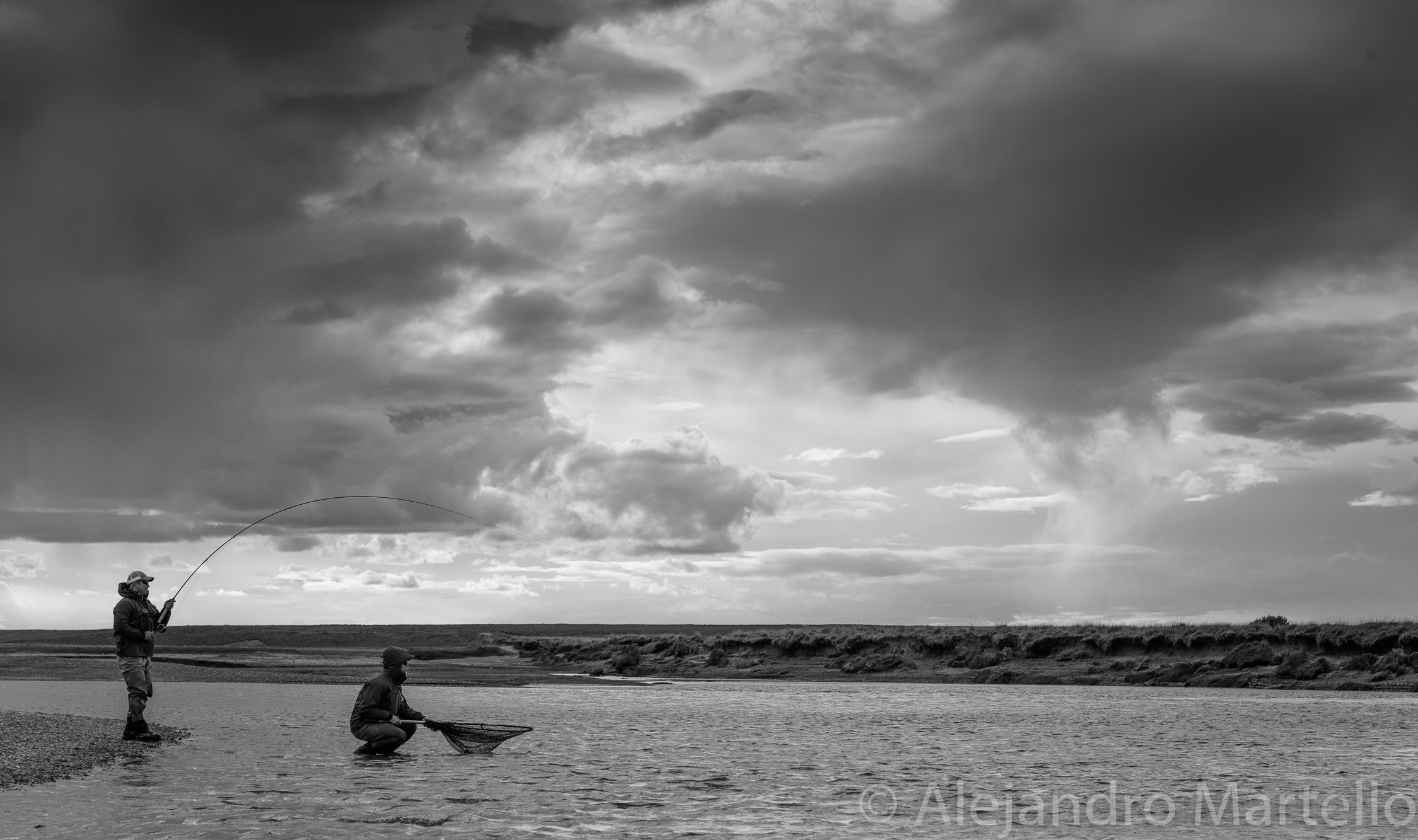 Similar to last week, we started with rain in the lower stretches and there were serious storms in the Andes headwaters.

The rain bumped river levels by about an inch, while the water stayed clear and fishable with small flies. Through the week snowmelt from higher elevations significantly cooled water temperatures down low, affecting the fishing. The fish weren’t as grabby, especially during the early morning hours. By around noon, as the sun warmed the water, the fish started rolling and reacting better to our flies. Wind also played a role this past week, considering we had four days of 40+ mph gusts.

Most of our guests were Rio Grande veterans—experienced enough to know that patience prevails through tough conditions. That patience was rewarded whenever the fish gave us a chance.
The “Lucky Man Award” went to Mike, who landed three 20+ pounders. His monster 28-pound hen was so far the biggest of the season. It should be noted that Mike is no stranger to Villa Maria’s Wall of Fame. He landed the biggest fish of the season in 2008; a beautiful 27-pound buck. Nicely done, Mike!

Depending on light, temperature, and time of the day, we had success with a variety of flies. But if I had to choose winners, small weighted-nymphs and rubber-legs generally outperformed the rest. Leeches and Intruders remained the best options in low-light conditions. Skagit heads with short, heavy sink-tips produced the most strikes. And we’re currently fishing tippets in the lighter 10- to 12-pound range.

This last week we hosted a great group of Austrian and German anglers. There was a mix of first timers, second timers, and long-time repeaters at Villa Maria Lodge. And, luckily, the fishing was in tune with all the fun. We had, so far, the most productive week of the season.

The weather was a bit crazy at the start—crazy good—with pleasantly warm days and light winds. But then we had a full day of heavy rain that led to a subtle spike in river levels. Fish typically don’t like to take flies when the river is rising. Fortunately, the water clarity remained good and after a couple of fishing sessions the fish started committing to the fly again.

After the rain, we had three straight days of unusual heat, where thermometer readings climbed all the way to 26-degrees C! Again the fishing turned tricky, but stabilized in the mornings and late evenings when the sun was off the water.

We experimented with a variety of flies without a clear overall winner. We skated dries, fished nymphs high in the water column, we dredged some pool with tiny flies, and we also used more traditional streamers. Everything seemed to work when fished properly. As always, good presentation is key. Green machines worked well on picky fish. Of course leeches were a must in the darker moments. 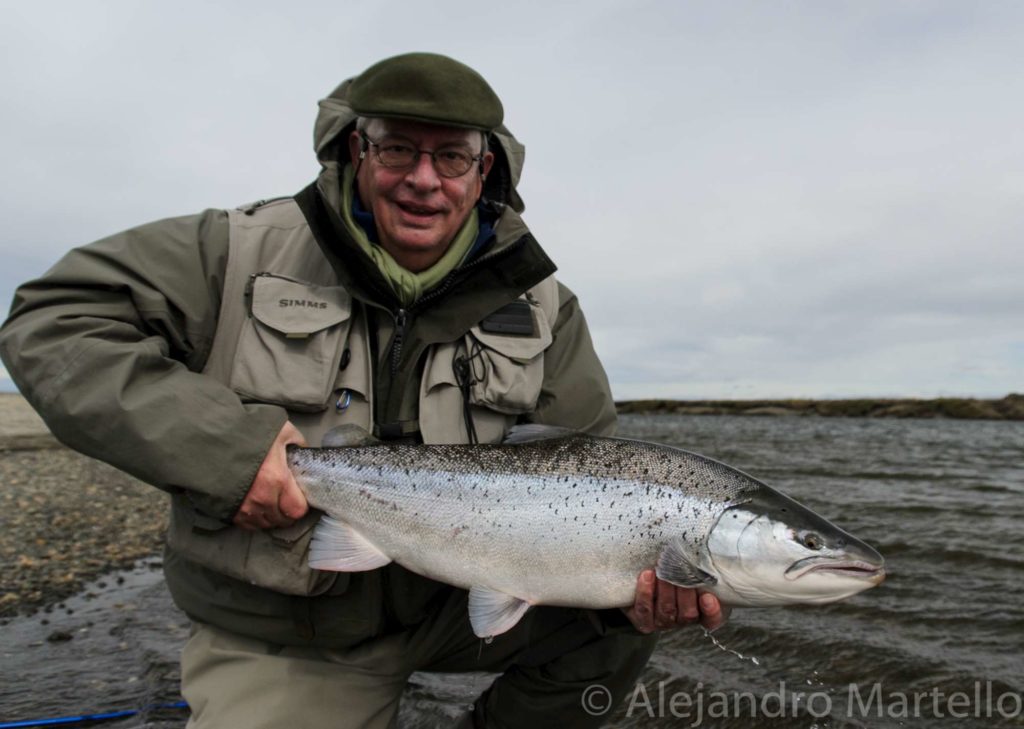 We just finished the third week of the season at Villa Maria lodge and it was fantastic!

The weather has improved dramatically from previous weeks with milder temperatures and gentle winds and this combination helped us to get the very best from the river.

However the Swiss anglers we hosted this week have been fishing the Rio Grande for over 10 years so they understood the scenario and did a fantastic job.

It also helped that we had a run of big fresh fish. This year the fish are particularly fat and gorgeous looking!

Slow sinking lines or intermediate lines with 10ft+ leaders were lethal in slow flowing pools. For the deeper or faster pools the use of heavier sinking tips were the best option but still long leaders were useful in those set ups.

Nymphs, both weighted and unweighted were the most successful patterns, especially those that were not very shiny. Some of them, fished just below the surface and without any stripping or motion were responsible for some outstanding takes, very similar to a regular or resident trout.

For our second week of the season, the weather returned to “normal” and the 60mph gales from the week before faded to more manageable 20 to 40mph winds. The river conditions improved dramatically.

River levels remain low and the water is very clear, which means we’ve had to carefully consider our approach to each pool before jumping in. Across the week we were forced to change from heavy sinking lines to intermediate tips at times—even in the same pool—due to some very bright and quite days.

The fish are starting to run in good numbers and signs of the great migration are evident in the lower pools. In those sections we’re seeing steady streams of mint sea-runs moving in. And the average size has been good: several explosive double-digit fish were caught this week.

Last week we used ultra-fast sinking tips and big streamers. This week we used mostly light lines, including intermediates rigged with unweighted flies like the always-deadly prince nymph and small rubberlegs patterns. Of course, streamers and leech patterns are still a must when the sun starts to set.

If you would like more information then please do not hesitate to contact Steffan Jones or call our office on +44(0)1980 847389.