The last rods on Astove in the current season are 26 March-2nd April (5 rods) and 2-9 April 2018. Contact Charlotte or Peter if you would like to hold space.

Full moon spring tides this week drove ice cold water onto the flats and flooded the lagoon at an impressive rate. The contrast between the dark clouds and turquoise waters made for awe inspiring scenes. With challenging weather conditions looming and massive tides the scene was set for an eventful and exciting week on the flats. Watching the clouds form and build on the horizon is something truly incredible, witnessing and feeling the air temperature drop, wind direction change and the wall of cloud approaching really adds to the dramatic landscape of Astove. Even with the wind, rain and clouds this week, Astove provided some incredible experiences for all our guests. 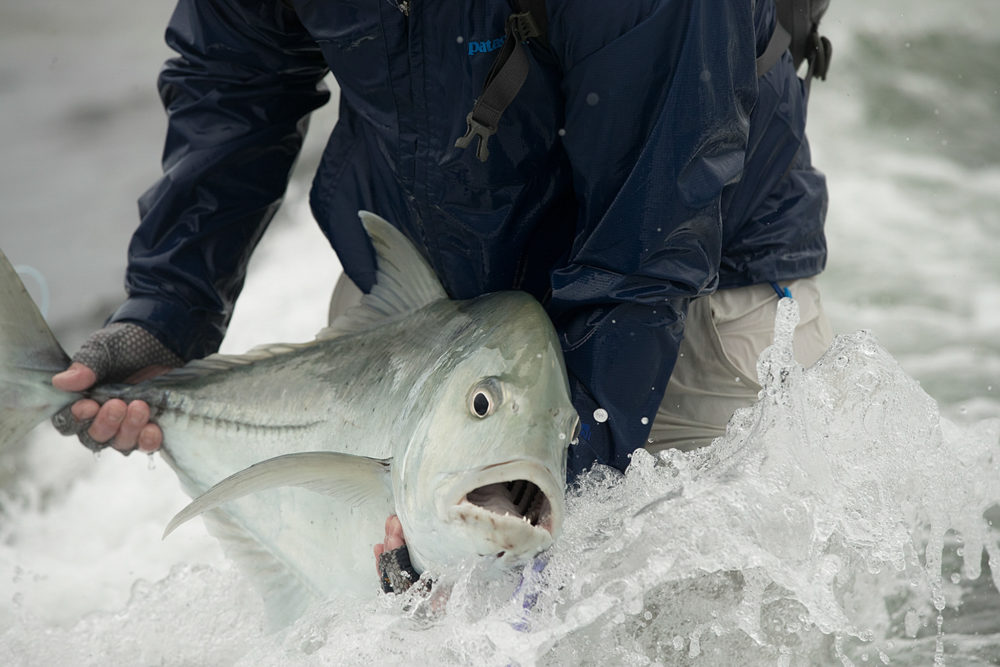 Hannu Stockell and Teemu Juutinen having travelled all the way from Finland were excited to finally get a chance to put a brush fly in front of a GT. Teemu and Hannu got to experience some exceptional fishing this week. They closed their week off with 23 GT’s respectively, some great bonefish and also a flats slam for Hannu. Their last day produced 14 GT’s, seven each, all of this happened in complete tropical storm conditions. Huge storm surf on the beach and casting into the teeth of the wind. Pete Tandy finished his week as our GT Champion. Two GT’s this week broke the 100cm mark and both of these fish were handled by Pete. On the second last day, just before the storm Pete got his fly in front of a 115cm GT in the surf zone. After an epic battle the fish was tailed in the shore break and Pete was left with a photograph and an experience that will last forever. 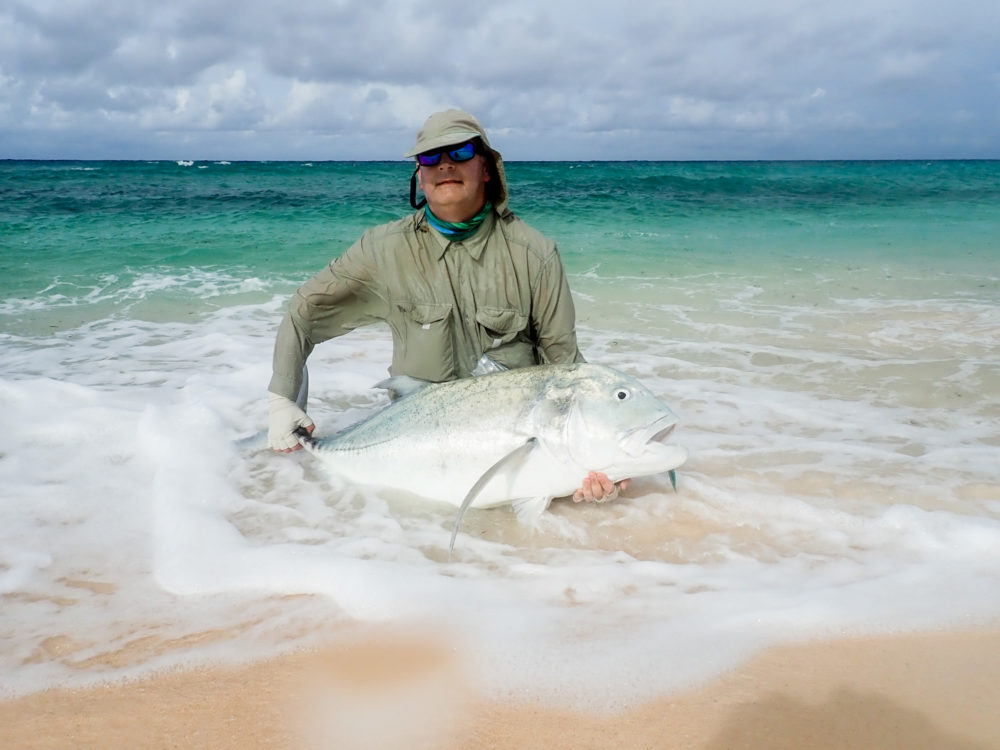 Long time fishing buddies Jim Conrad and Bill Powell joined us this season for their second trip to Astove. One particular day of their week stands out. The scene included a sky filled with thunder and dark clouds, the surf zone eerily calm with not a breath of wind creating an ideal dynamic to see menacing GT’s cruising the flat with half their backs out the water. This remarkable scene was finished off with Bill and Jim both hooking into GT’s at the same time and landing seven GT’s between them. Thunder, lightning, big surf, howling winds, massive tides and the Astove environment were all against our guests this week. The guests took on the elements with an incredible level of optimism and this paid off by the end. Closing our week off with 42 GT’s, all except three were caught on the flats. Three Moustache triggerfish and 143 Bonefish. In the conditions that we were dealt this week these are truly impressive numbers. 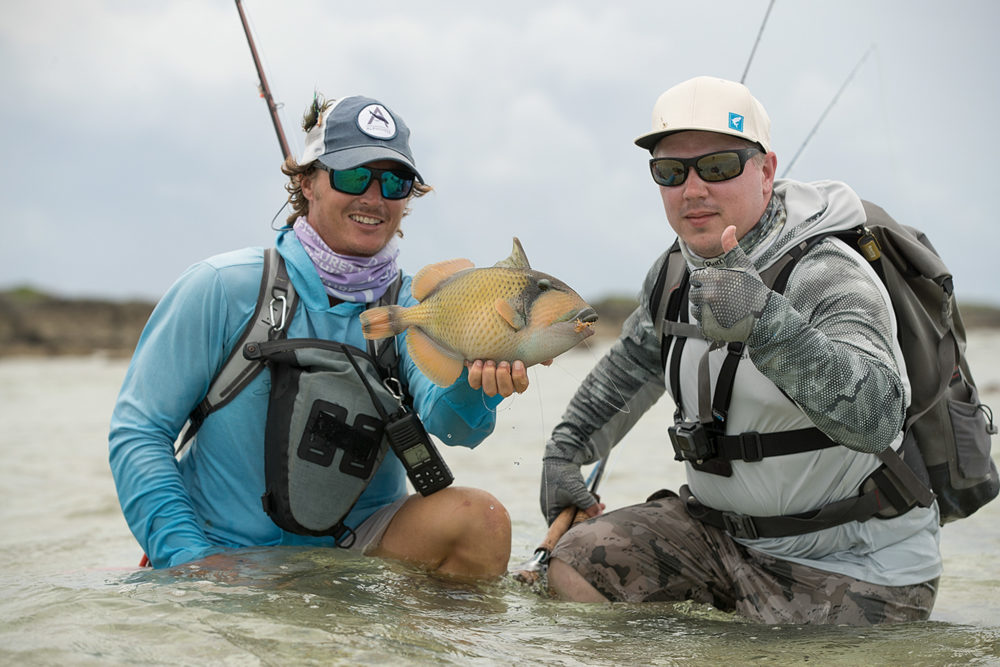 As another week closes on Astove, we reflect upon the amazing fishery that the Seychelles outer Islands have to offer. The predominating winds from the northwest combined with storm fronts traveling up from Madagascar to produce some challenging conditions, however the six anglers pushed through to make it a week that will go down in Astove history.  As the spring tides waned into neaps, the lagoon continued to produce great action throughout the day while the surf had smaller windows of opportunity to wade for fish. 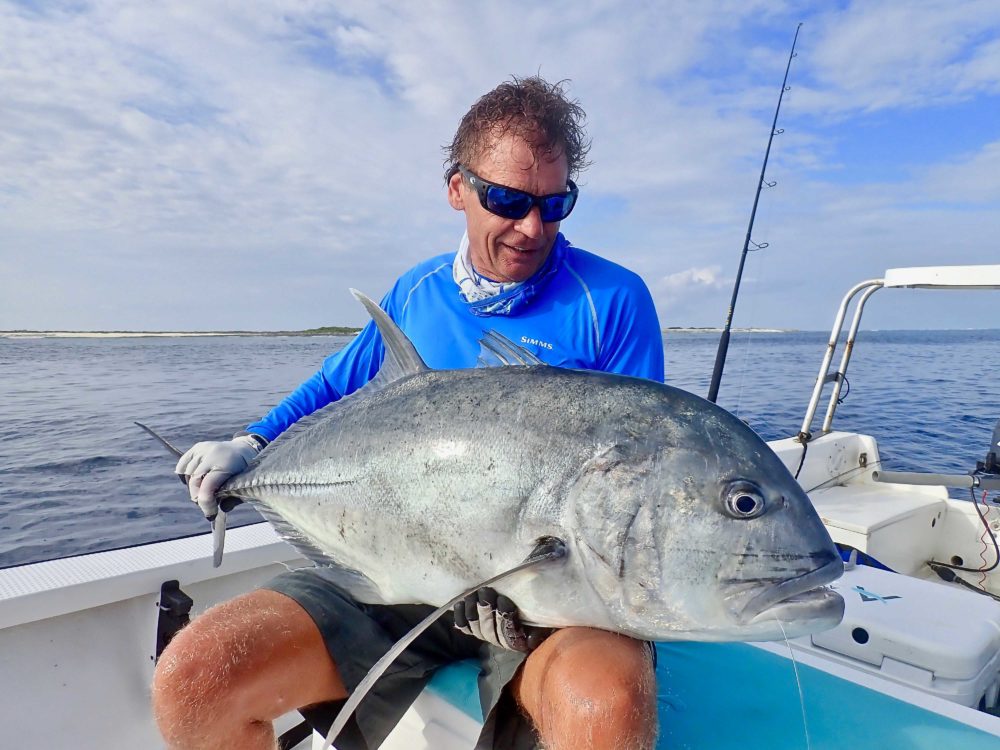 Things got going with a bang with each angler ringing the bell the first night after fishing. Bill Hegberg had an outstanding first day landing a ‘flats slam’ which consisted of a giant trevally, an Indo-pacific permit of 68 centimeters, and a number of bonefish. Craig Williams and Nout Kwint walked the surf zone on day one with legendary guide Serge Samson and found a number of GT’s on stingrays, each with a nice fish to hand by the end of the session.

As the week progressed, GT’s continued to be found both in the mouth of the lagoon and in the surf, but the challenging light conditions made for quick shots at close quarters. With consistent cloud cover the anglers decided to move their efforts to the sand inside the lagoon, which turned out to be some of the best fishing we have ever seen. Longtime client Ron Benck, managed to achieve an unbelievable ‘flats slam’ by landing eight (not a typo!) magnificent Indo-Pacific permit in a single morning session and followed them up with two GT’s, and handful of bonefish. This is the most permit one angler has landed in a day in Alphonse Fishing Company’s history. 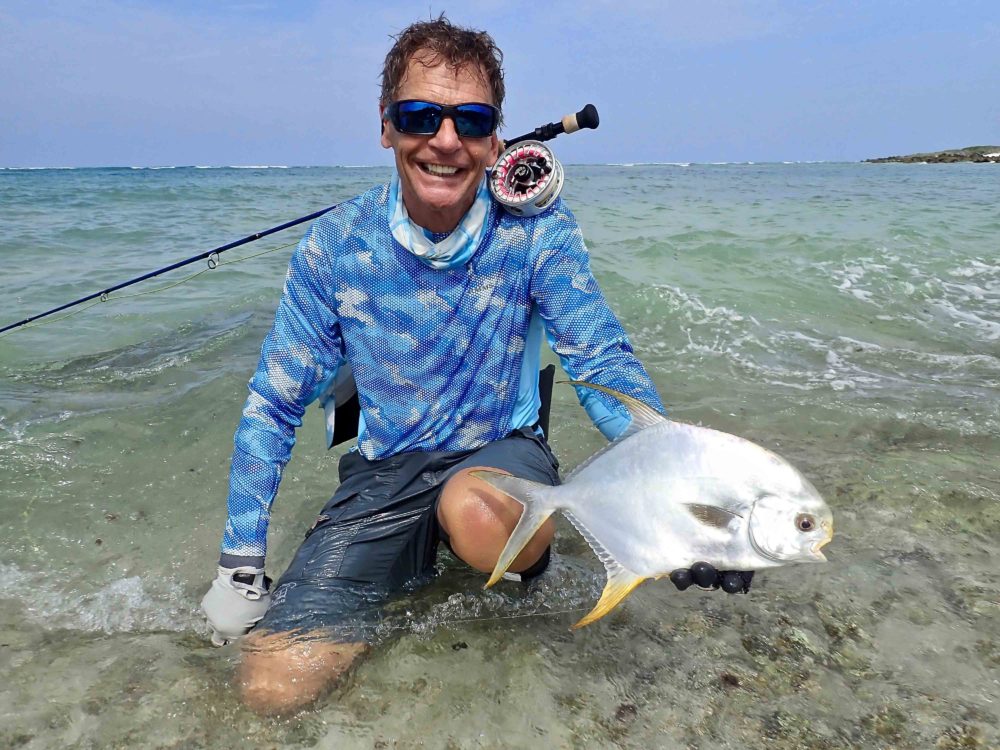 Boat partners Peter Stewart and Dale Waterman heard the news and capitalized on the lagoon the next day with five permit between them, three GT’s a piece, and a few bones for each to complete a ‘flats slam’.As the final days of the fishing week came, the seas calmed and allowed for exploration of the amazing drop-off that Astove is known for. Ron set out with a mission of eight giant trevally after his eight permit day and did not disappoint, landing exactly eight including the biggest GT of the week at 104 cm. Peter and Dale also decided to explore the outside of the atoll and landed quite a few species including GT’s, a Dog-toothed Tuna, Bohar Snapper, and Blue-fin Trevally. 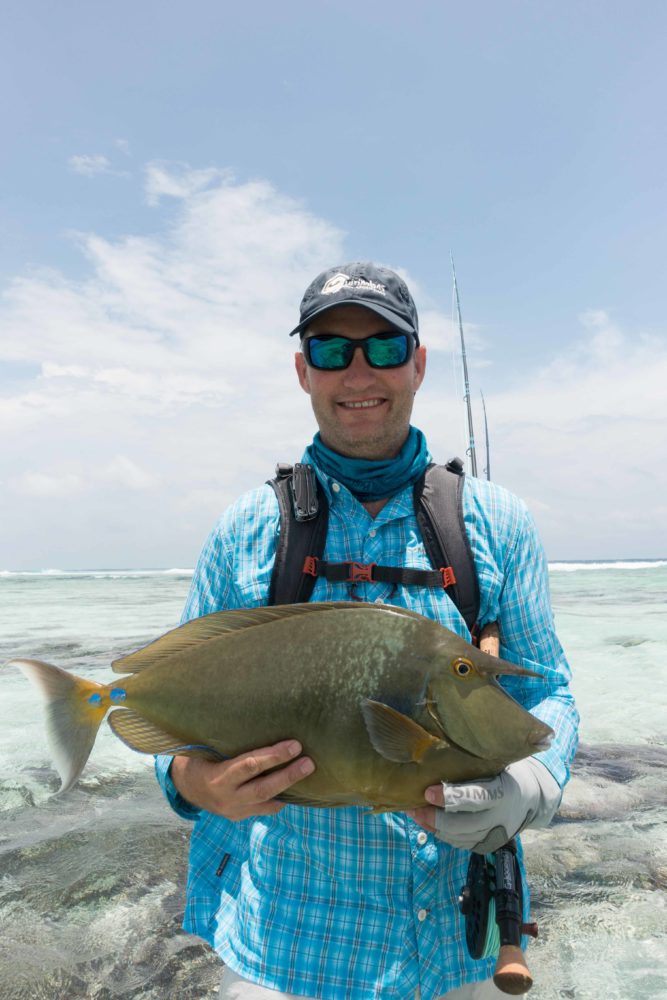