Astove atoll is a unique environment, in the outer atolls of the Seychelles. Remote and untouched, the lagoon and flats await the intrepid saltwater angler. Three weeks worth of fishing reports are below … enjoy. 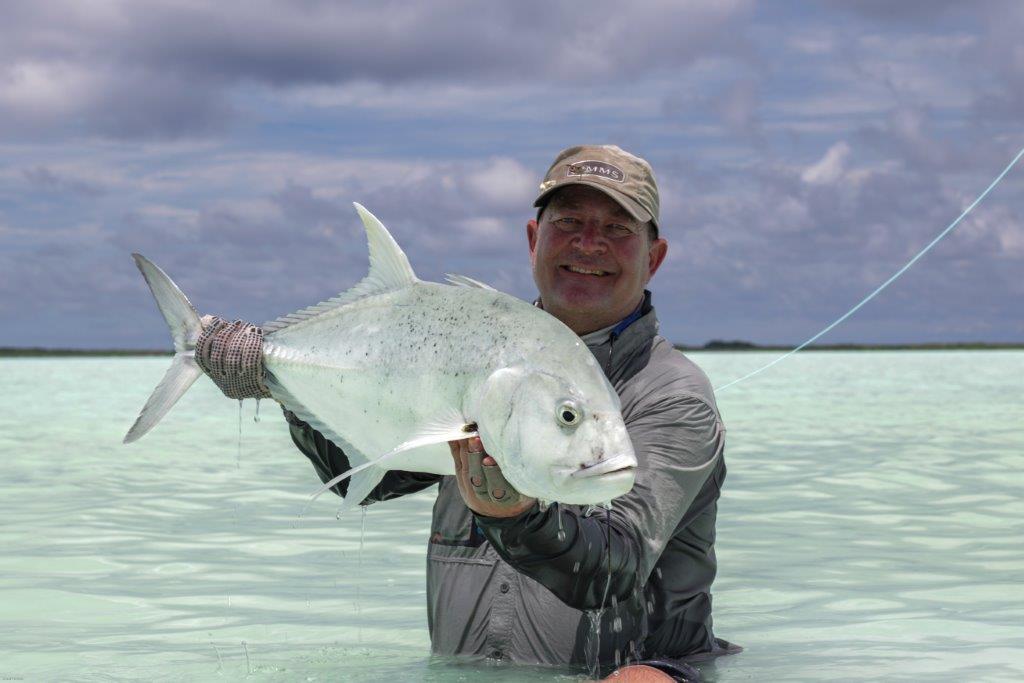 Great weather and big spring tides often bode well for some exciting surf walks along “The Wall’s” drop-off. There is nothing more exhilarating than standing on a crystal clear edge that falls to over a thousand meters while anticipating the pushing tide and whatever could follow the flood. The sensation of cooler water around your bootlaces means it’s about to begin and the predators are judging the depth before they pop onto the flats to and patrol for their next meal. This week saw four fly fishing guests and two snorkelers who made the journey to experience what has to be some of the best in the world. The skinny water bonefishing inside the lagoon is simply out of this world and often the reason why GT’s venture up into the shallows. These predators were around in good numbers with a total of 28 GT’s caught for the week, with an average of seven per angler. Joern and Maria kicked off their three-week stay by landing seven GT’s in a session while fishing “The Mouth”. Tom Chou and Christian De Corral both ticked the triggerfish box, with Christian completing a “Flats Slam + 1” comprising of a GT, bonefish, moustache triggerfish and a big dogtooth tuna. A great end to a fantastic week! 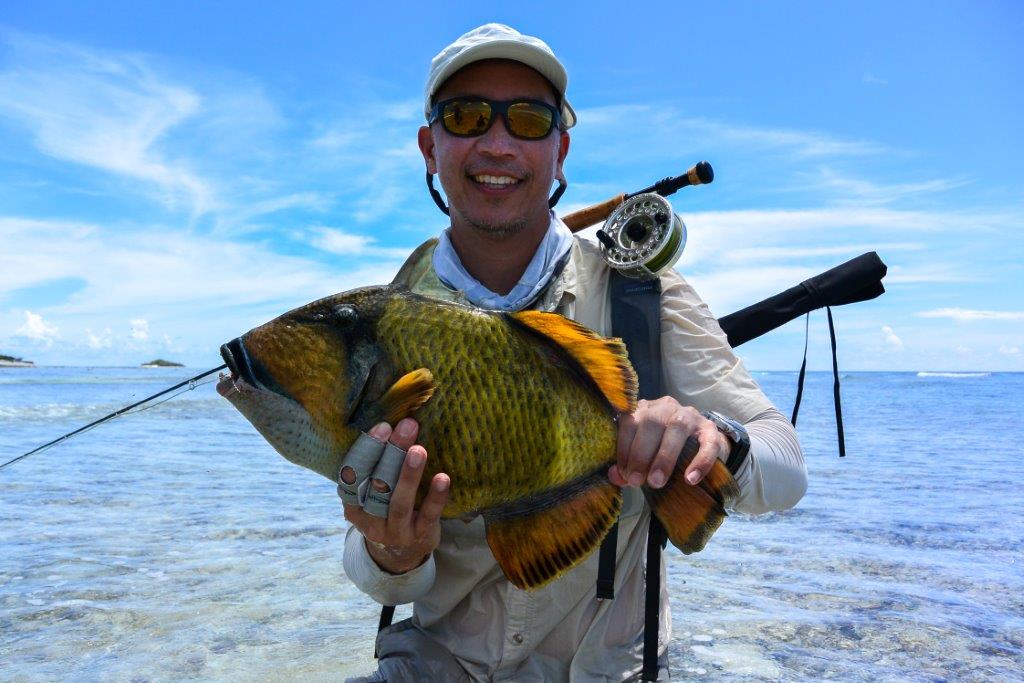 In knee-deep water, trying to figure out whether to be holding a 12wt or whether to be ready with an Al-flexo for a tailing triggerfish can be a daunting task. On a pushing tide the answer to this question can sometimes be critical to making the shot at your GT or not. Three weeks into the Astove season and this question was asked and answered many times this week. With slower moving tides at the beginning of the week lots of time was spent walking the turtle grass and outer coral flats looking for triggers, big bonefish and the infamous GTs. Unfortunately this week brought about some challenging weather conditions, with a big westerly wind blowing and making fishing outside on “The Wall” virtually impossible. However, the GT’s seemed to like the really rough conditions, even though this made casting remarkably tough and inevitably effecting our GT tally with only 18 landed for the week. A special mention needs to be given to Jim Mair who got his hands on two moustache triggerfish this week and also a good number of GT’s. One of Jim’s fish in particular was spotted with its back out of the water hunting baitfish along a mangrove edge. Spencer Palmer also went on to finish his week off with an incredible “Flats Slam” and then in the final moments of the last afternoon hooked and tailed a gorgeous big indo-pacific permit.

The permit fishing inside the lagoon of Astove is a completely different dynamic to any other permit fishing around the Seychelles. The water is incredibly milky and these fish are notoriously difficult to see, even in clear water. Most of the shots happen within 25 or 30 feet of the skiff, it’s really close quarter combat that requires quick reflexes.

After last weeks trying conditions the weather finally played along beautifully, the tides kept clean cool water on the flats and as a result the fishing was out of this world.Fishing the white sand flats that line the inside of the lagoon is a breathtaking experience. The spectacular lagoon “Mouth” brings life to the lagoon as the water floods up the vein-like channels and filters on to the flats.  It’s a place to behold and something we would like to share, which will happen shortly. The Black Fly Eyes film team visited our shores and managed to get some incredible footage that included some amazing bonefishing, 15 GT’s and a big permit, all caught on camera. Our long time friend Chantal Chone had an incredible week. A combination of highs and lows with a milkfish and three permit lost in a session but 12 GTs, some good bonefish and two moustache triggerfish, which resulted in two “Flats Slams” in consecutive days. John Horlock also achieved a “Flats Slam” and went on to land 7 GT’s as well as a moustache triggerfish. Robert Gilchrist was our big fish champion as he managed to land six GT’s with three measuring over a meter and the biggest measuring 115cm.  A great week with a total of 41 GT’s landed. 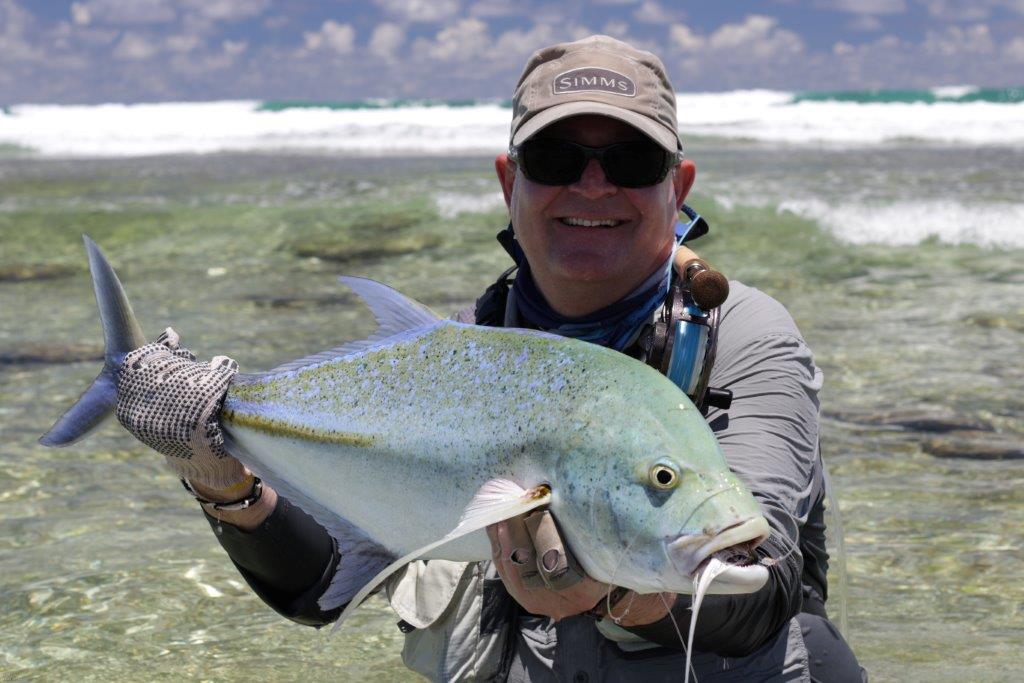