Having spent Sunday night on Mahe, six of us arrived at Astove on the Monday, late morning, keen to been ground breakers in this remote part of the Indian Ocean. We were the first party to fish the atoll as a land based operation, the whole week having been taken by Aardvark McLeod. After a quick lunch, we geared up and were off with Christiaan Pretorius – my friend Stewart Martin and I fished together all week. In the afternoon I got three GTs, two triggerfish and a 9 lbs bonefish. Stewart’s tally for the afternoon was three GTs. We walked for bones and GTs in the morning on the inside, east side, moving down to the mouth then fished the reef on the east side near the marker. In an opening day bonanza, I had started my week with a flats slam – GT, trigger and bonefish.

On Wednesday we were guided by Serge Samson; a dreadlocked GT magnet.  Day two on the flats landed us two GTs, one of 90 cm and another of 20 lbs, a queen fish and one bonefish. Stewart had three bonefish and we walked the inside of the lagoon, on the west side, to the island looking for GTs and permit.  Sadly we saw no permit and only a couple of GTs before we walked from the lodge to the bay beyond the island on the east side. It was a truly stunning sand flat with the waves breaking over it and the privilege of seeing a Seychelles falcon on the wing. 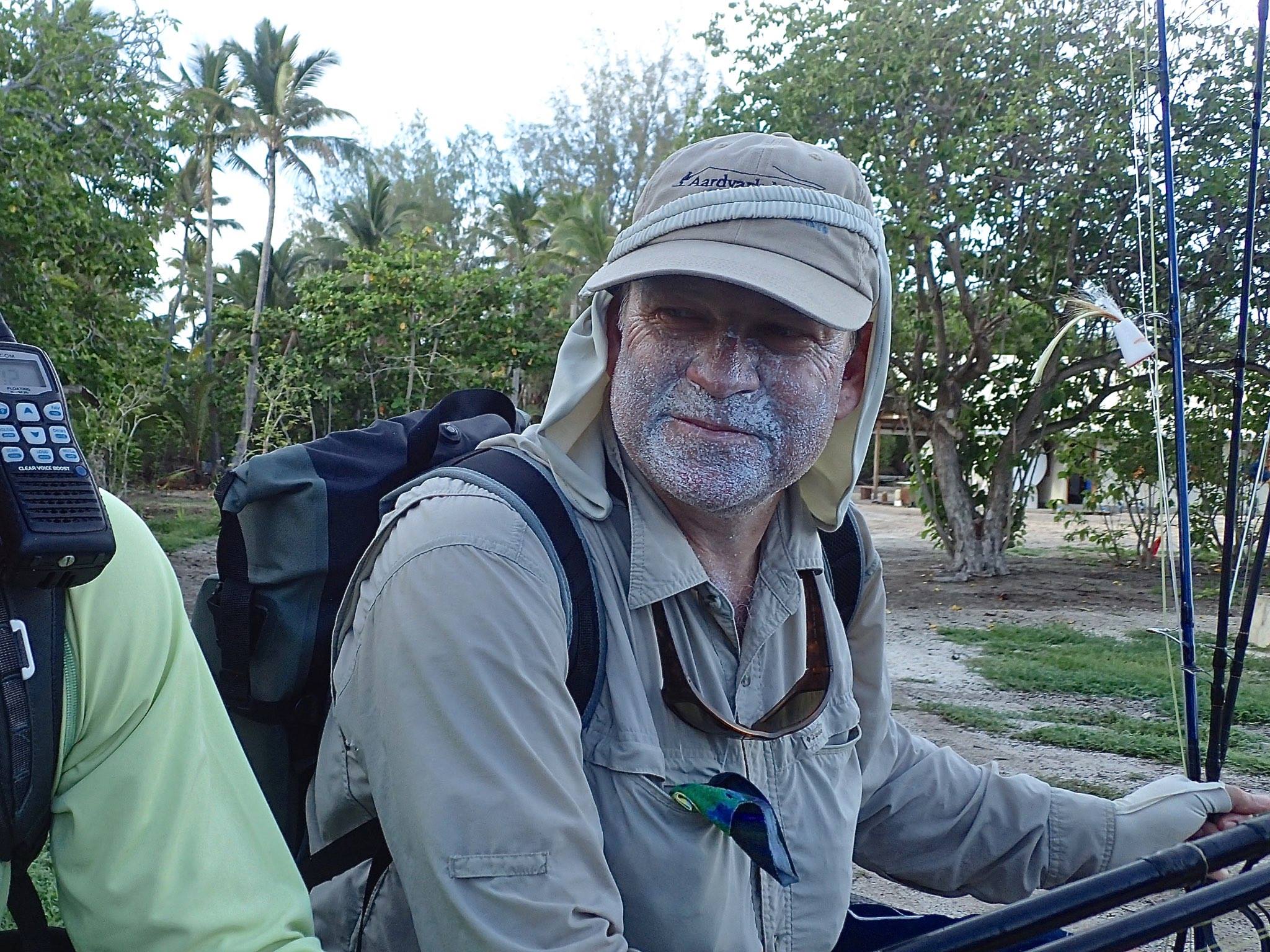 Thursday dawned with terrible weather and we were up and out with Cameron Musgrave as our guide for the day.  We walked from the lodge to the north of the island by the runway.  We then fished in the lagoon by the runway and eventually made our way back to the lodge. There was minimal tidal movement during the day and the fish were unco-operative but Stuey had two GTs behind a teaser and about four bonefish.  My day was quieter than the previous few but still  landed a bonefish and a small GT that I saw on a ray.

Friday Wayne Haselau was our guide and we decided we were going to try and get a sailfish on fly on the east side of the atoll. As we left we saw a pod of about 15 milkfish feeding opposite the lodge. Stuey was rigged up to have a go when we realised that he had a sink tip on and was then relegated to the back seat and so I was up. Wayne put a bulky milkfish fly on (actually a gift to Stuey from his wife) as the fish were high in the water. Nobody had ever landed a milkfish at Astove and as Wayne was one of the original duo, along with Arno Matee, who pioneered milkfishing, we were in good hands. We had two or three casts before the fish moved and we went back up wind. On the third cast they were in a perfect position. The fish took with a steady draw and I jabbed it hard twice to set the hook. We were fighting a milkfish above a 1,000 metre drop off and we had a slight difference of opinion.  The fish seemed to want to go out to sea but Wayne wanted to go on the reef. After ten minutes of light drag and no sign of the fly line I realised the fish was stuck in the reef. Wayne backed the boat up to the reef and with heart in mouth it came free just as Wayne was getting his clothes off to dive in and free the line. 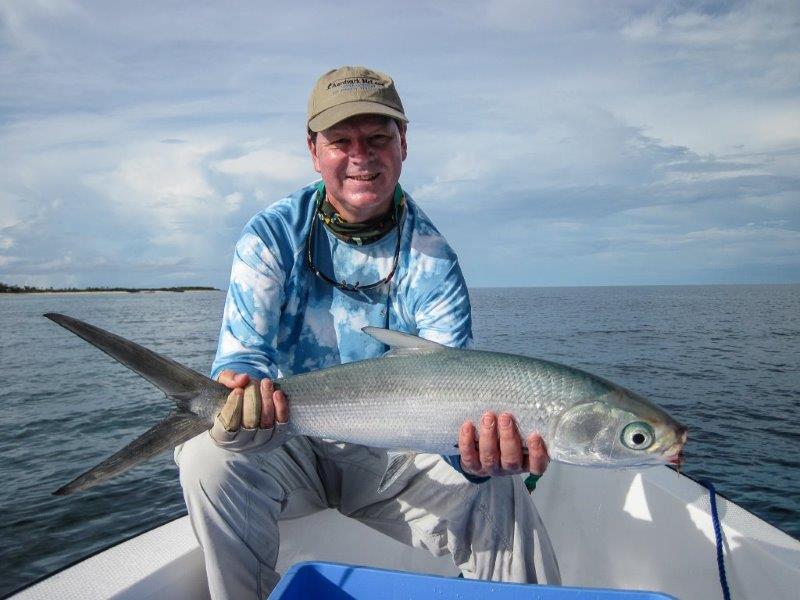 About this point, Wayne started to worry about the net that we didn’t have. We had decided to bring the fish back across the reef and onto the beach 500 yards, and countless coral bomies, away. Going for another first, Wayne suggested that we land the fish in the milk crate that normally held the anchor. Having been instrumental in working out how to catch milkfish, Wayne has now come up with the new ‘must have’ landing kit. After 20 minutes I managed to get its head up and Wayne slid the milk crate under it and missed it.  Surprisingly three minutes later, and given the equipment we were using, it was in the box. Astove’s first milkfish on the fly. Probably the first ever milkfish landed in a milk crate. 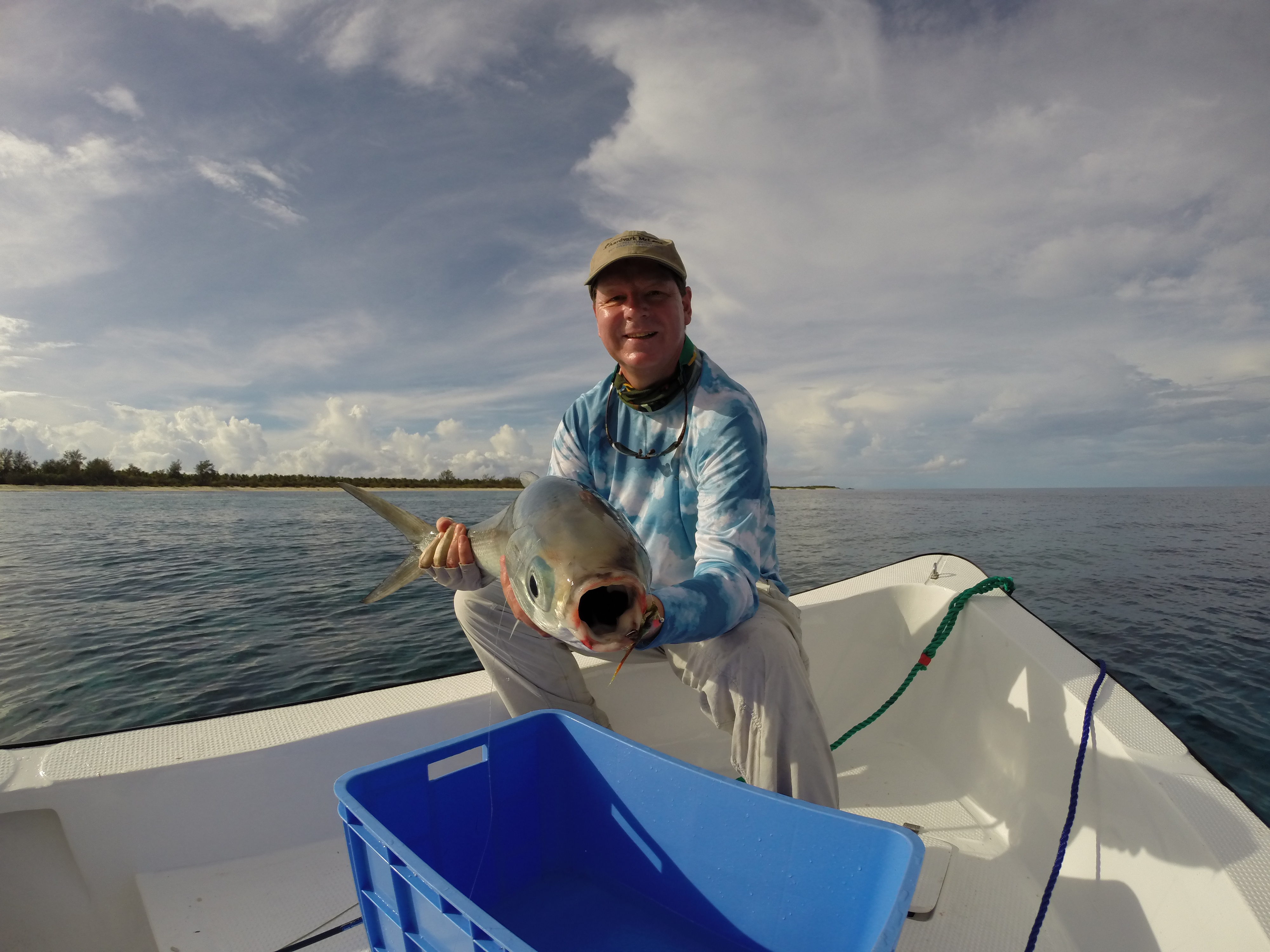 Later in the mouth of the lagoon we picked up a small GT sitting on the back of a turtle followed by then the smallest bonefish known to man; one again landed by Wayne in the milk crate. Size didn’t matter; it was still a slam before lunch.

While we were working hard, elsewhere on the atoll, Joern and Maria had landed 19 fish between them including one over a meter. Vadim, despite the amorous attentions of a shark, had landed a very nice GT in excess of a meter. Joern and Maria were fishing on one side of the channel at the mouth of the lagoon which was obviously the hot spot for the day; the other four of us, fishing on the other side of the channel, had five GTs between us. 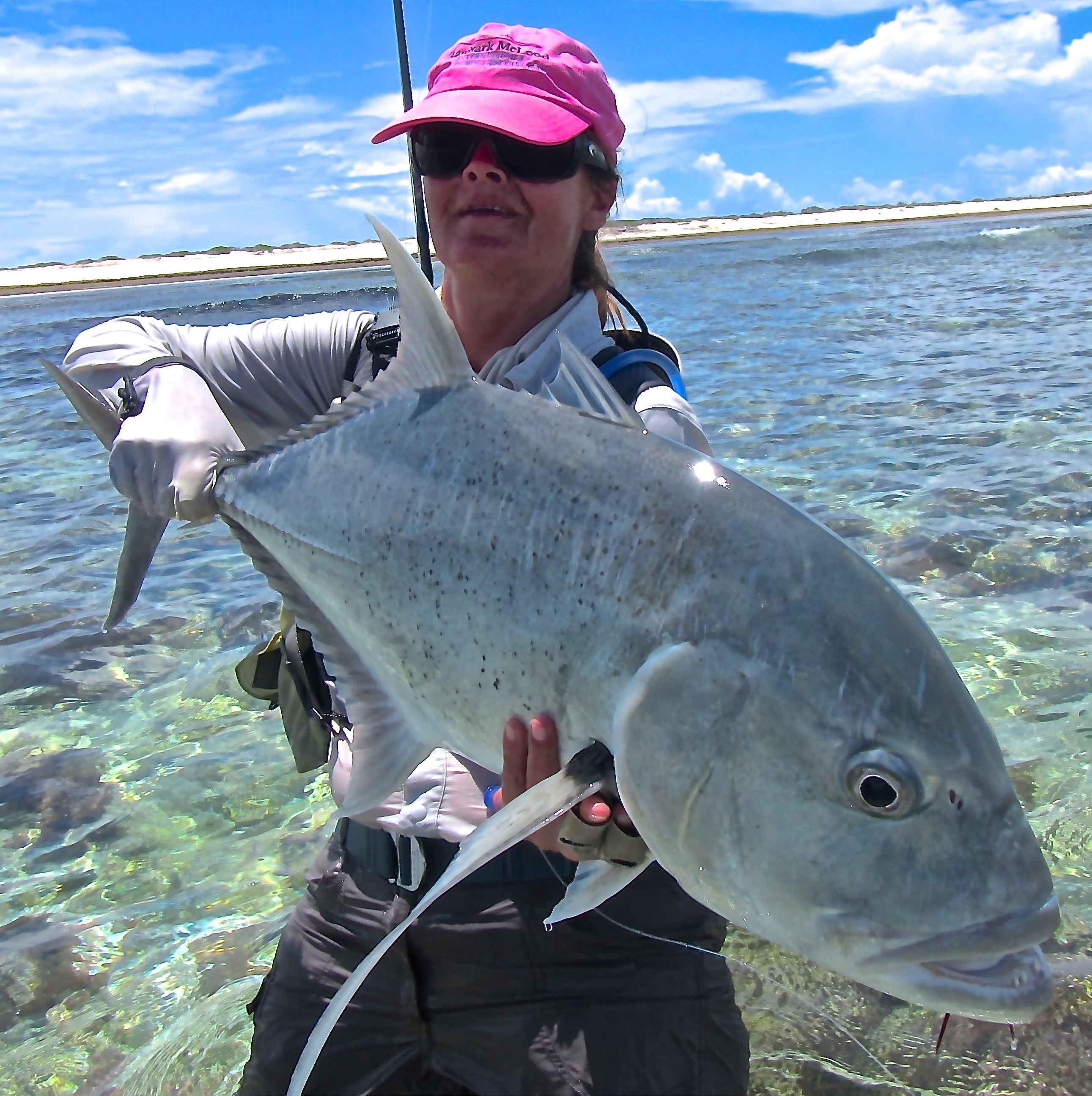 It was also Friday 13th and the gods had now woken up so there was no yellow fin tuna sashimi. Overnight one of the skiffs had sunk but all in all turned out not to be a bad day at all with 24 fish for the party.

Saturday we went out late as one of the skiffs was out of action, having rolled over in the night but we headed out with Cameron, going down to the islands in the lagoon. I managed to break my rod on a bonefish and cheered myself up with a super black GT on a ray in very skinny water. Stuey and I  hooked a number of GTs including a nice 73 cm fish which I spotted and landed.  In all,  I had four GTs, one bonefish,  three Bluefin trevally and a russell’s snapper. I lost one fish to a shark and a good GT just came off.  Stuey had five GTs (and no broken rods) for the day. We saw three fish over a meter and both Stewart and I had the fish take the fly but not connect. Elsewhere on the atoll,  Vadim and Peter had 11 GTs between them. 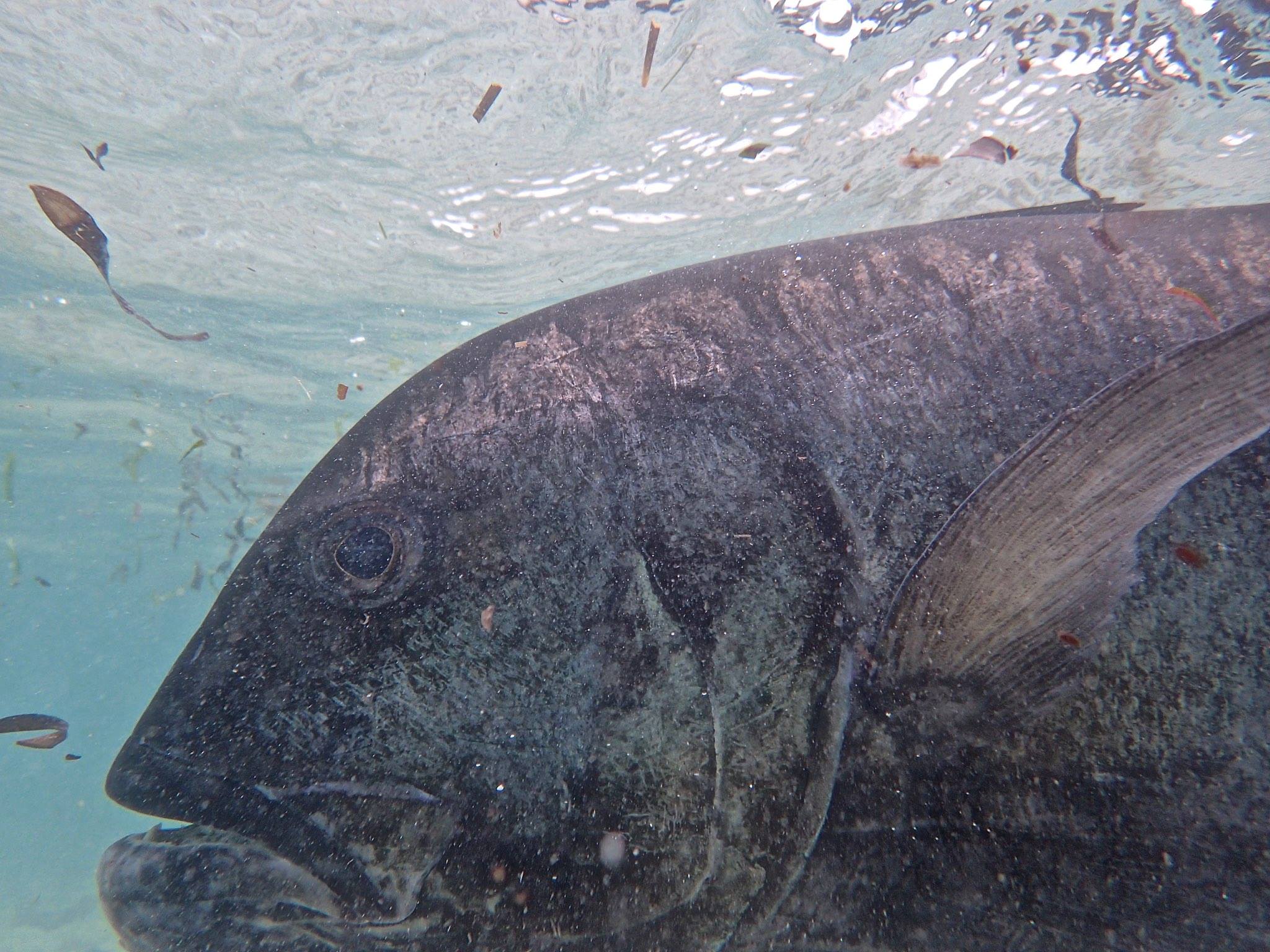 Sunday Wayne, Stewart and I spent the morning bonefishing in skinny water on the east side. We caught ten between us, up to 6 lbs before we walked to and beyond the wreck. The ground was terrible to walk on and all of us fell over in the surf. Having got there, the fishing was slow to start off with but once we got to the wreck Stewart had three fish, including his largest ever, which ran all over the coral before Wayne could tail it. It was an epic fight with a very nice fish of 30 lbs at the end of it. 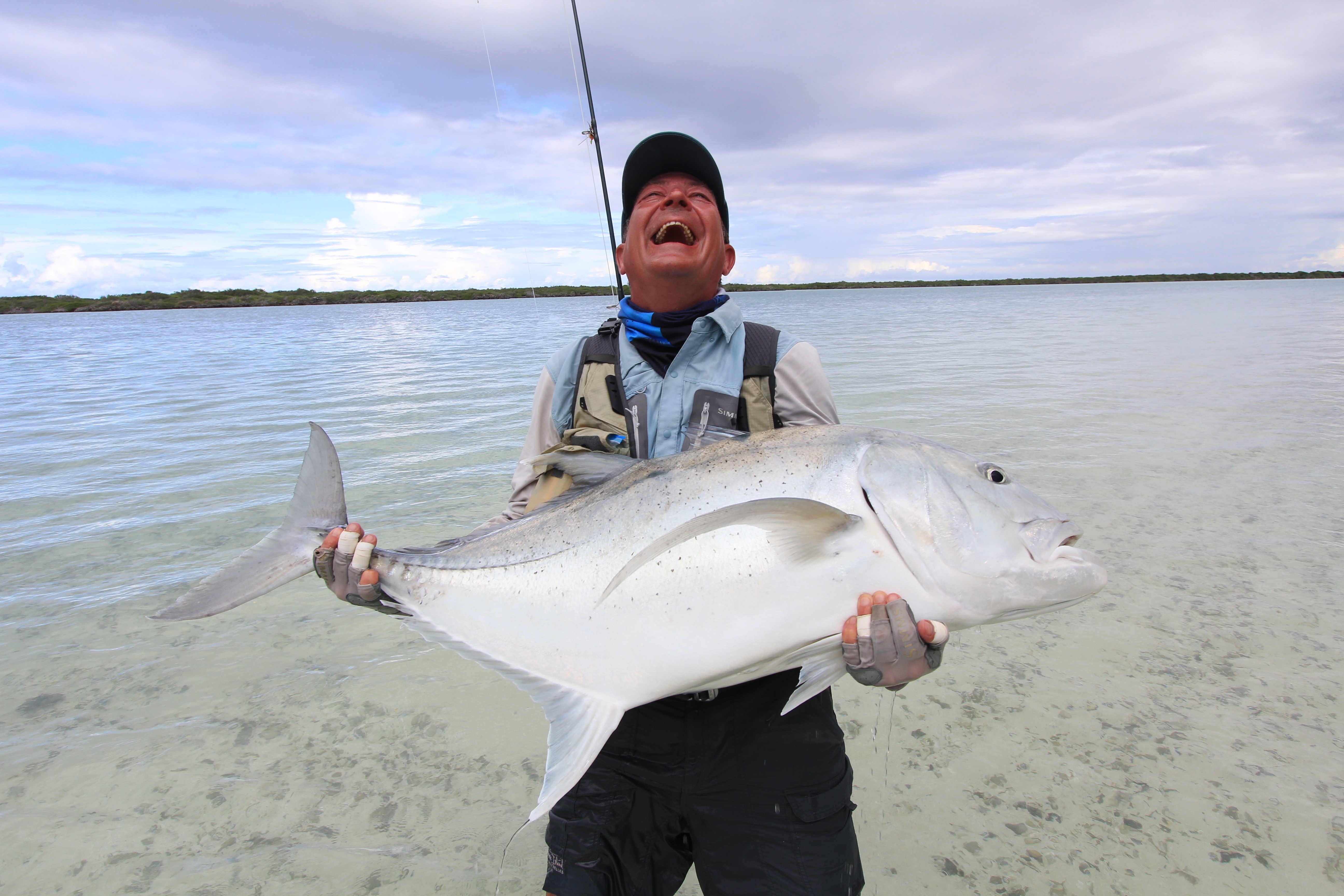 I had not done much blind casting and was trying to look for fish. I was 100 meters ahead of Wayne and Stewart and suddenly saw the fish of a lifetime within 10 metres of the shore. It was the size of a refrigerator. I ran up the beach until I was opposite the fish and cast my tiny black brushy perfectly. You have time with these fish at high tide to get yourself organised. Needless to say the fish ignored my one perfect cast of the whole holiday. I then ran up thirty yards in front of the fish where the breaking waves were making the water slightly milky, still within 10 metres of the shore. I cast the fly over the milky water into the clear water, an easy cast of about fifteen yards despite my nerves. I stripped the fly in a slow steady strip and was aware of the fish turning into the milky water. I stripped as fast as I could aware that the shore line was rapidly approaching. When suddenly this bucket like mouth opened behind the fly.  I was physically scared when the fish took, easily the biggest GT I had ever seen. I set the hook hard twice and the fish just screamed away. I checked my drag and could not tighten it any more. I shouted to Wayne “what should I do? I can’t stop it” and he just laughed and said stop the reel going round with your hand. I couldn’t. With over 200 metres of backing out I held the reel with both hands and tried to walk backwards, I was being pulled into the sea and then the line broke. The fly line had broken. I had been humiliated and destroyed. It was a Harrowing experience. What a fish. I think it was between one metre 20 / 30cms. 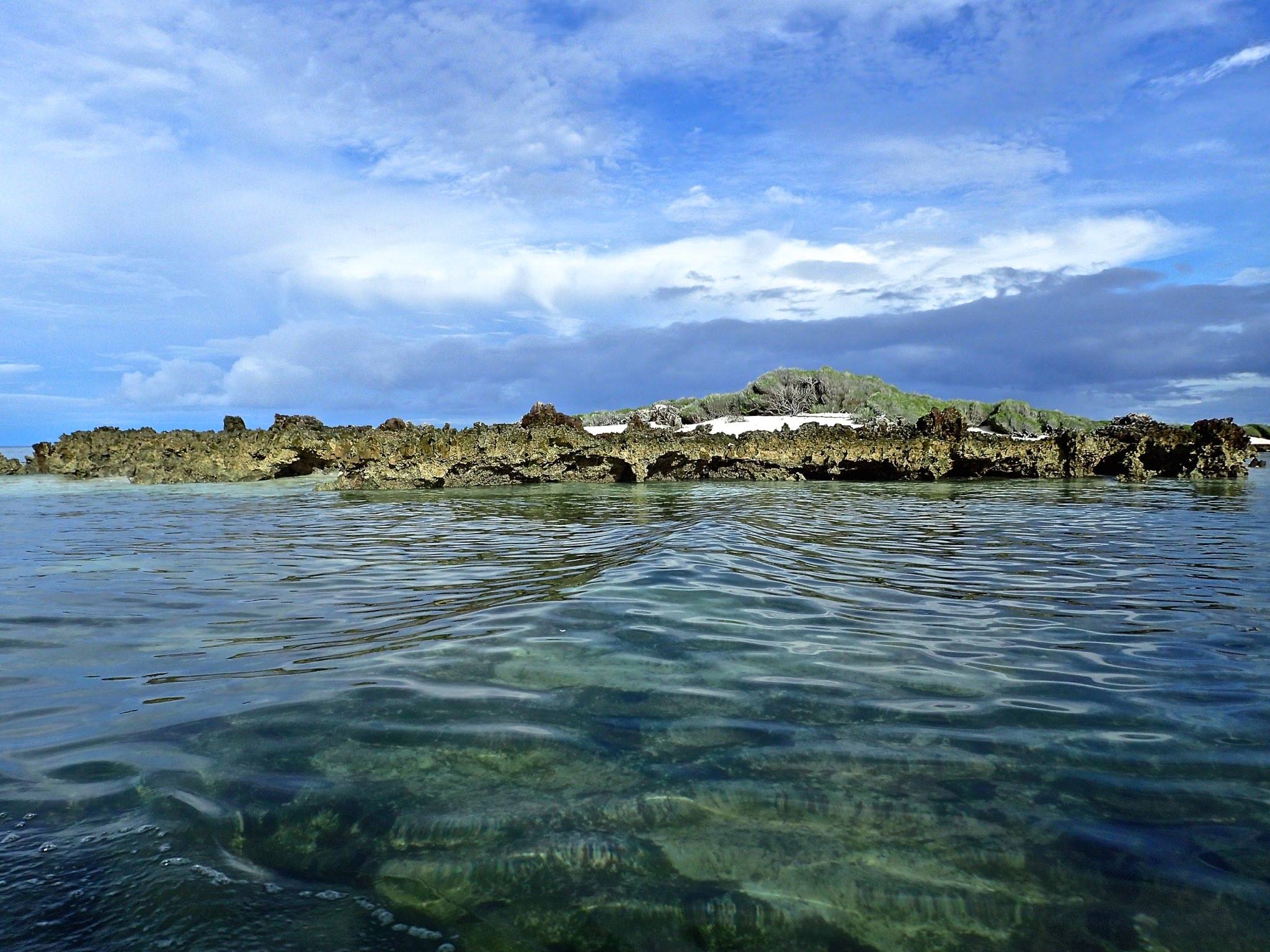 A little daunted we wandered back towards the boat and in a lovely channel I did a couple of blind casts and hooked another fish of over a metre, this came off in five seconds.

Monday. We were due to fly out at 1230 so I got up early and went to fish the lagoon on my own for three hours. There wasn’t a breath of wind and the only ripples in the water were from fish. I walked slowly from the boats down to Permit Point, about a mile, with my trevally stick. With low light you could not see into the water. I cast at a big wake and stripped to no effect but with the wake now 15 meters from me, I cast again. The wake turned on the fly but I could not get the fish to take the fly before I ran out of leader. It was a good fish of about 90 cm. I saw another wake, cast and caught a small GT of 10 lbs. Once at Permit Point, I saw a small shoal of permit which I cast at but with no luck. I headed back towards the boat and caught some nice bonefish on the way. With 200 metres to go of my fishing holiday, I saw the unmistakable tail of a large permit swimming toward me. I put down the trevally rod and tried to get set with my bonefish rod. Why does the line always get tangled with a big fish coming? I got out a cast of 15 meters in front of the fish and allowed the fly to sink. One strip of the fly and the permit spooked at high speed. It was about 20 lbs. 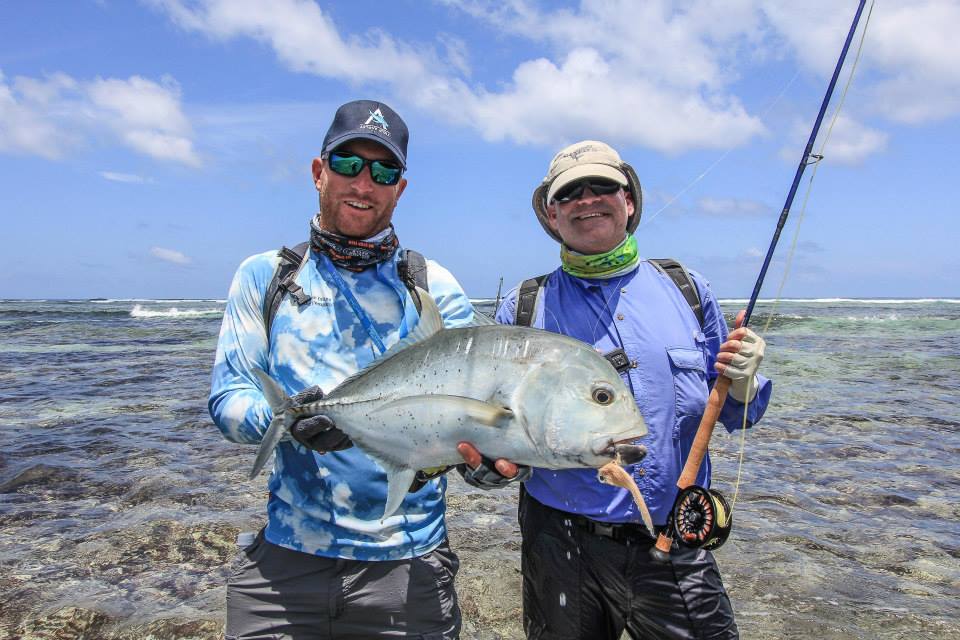 For the six of us we had 98 giant trevally two triggers, a milkfish, a dog tooth tuna and countless bones and bluefin trevally. I think there were at least eight fish over a metre. The most effective flies were James Christmas’s sand prawn tied by Fulling Mill and I think any flies would have caught the GTs, but Black and Tan brushies were popular. The NYAPS I had were too big for these fish and you should get these from the guides on the island as they know what works. Christiaan’s green semper was a great fly. These are big fish and you need 80 lbs of backing, strong fly line and 130 lbs leaders. Reels need to be top of the range and capable of stopping a fish. 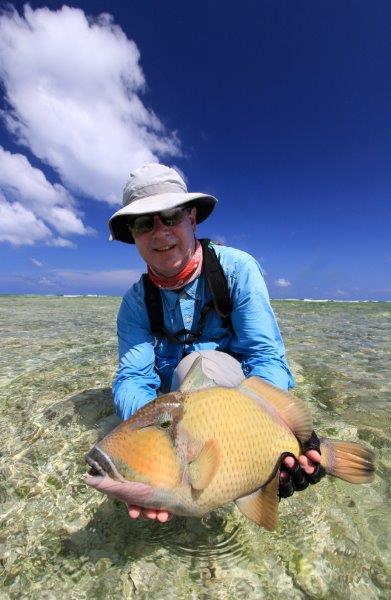 We were the first party into the island for a full week and had a fantastic time. The food was very good, the accommodation adequate (it is being upgraded for next season). Just be warned that the mosquitos are bad and you will need long trousers and sleeves to help keep them away. All credit must go to Keith Rose-Innes and Cameron Musgrave for setting up and then hosting an amazing place. Astove really is a land of giants.  Until next time.