Atlantic salmon on the dry fly.

As usual the best laid plans always go aside, and a combination of jet lag and excitement found us both bouncing around at four in the morning thinking of the day ahead…. and then we found out that we had actually driven across a timeline last night and it was in fact three in the morning.. oh joy! Luckily we discovered how the coffee machine worked.

After a solid breakfast we headed out with our guide Jean-Marc Poirier. B3 beat was to be ours for the day. After a half an hour ride and a quick wander through the woods the sight that met us was stunning. The river winds its way through the trees and is absolutely crystal clear. What makes this river truly unique is the ability to catch Atlantic Salmon on dry fly. On inspection the first pool was holding somewhere in the region of 200 fish. How do I know? Because I could see each and every one of them… Jean-Marc explained the technique to me, and essentially we would be fishing dry flies, or giant Bombers to be exact, on the dead drift. My weapon of choice, an new Hardy Demon 9′ 6# rod with matching demon reel and a floating line.. against fishing in the pool that were in excess of 30 lbs. This was going to be fun! 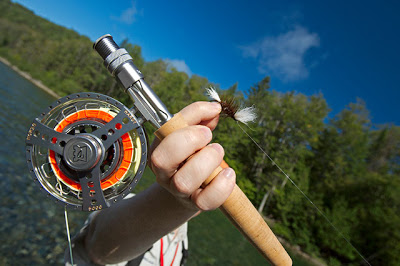 The early morning was a little grey and chilly, so the fish were hugging the bottom closely. I began at the bottom of the pool under Jean-Marc’s tutelage, covering the area from in a small window in front of me directly across the stream. When Bomber fishing it is best not to cast directly upstream as you line too many fish, so the fly should land a foot in front of the fish. If there is no reaction after a couple of casts, then move up the pool slowly to the next. It took me a little while to master this as my immediate reaction was to start casting too far upstream. 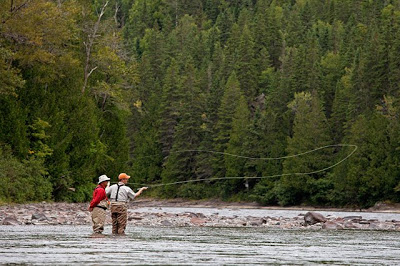 I made one cast that alighted over the a pod of fish, and as usual I was thinking they would not react when suddenly a large fish of maybe mid twenties turned around and chased the bomber downstream trying to inhale the fly. A big swirl, a splash and no tightening as the fish had missed the fly…. or was that because I squealed like a girl and pulled the fly out of its mouth? Not sure, but it was incredibly exciting and the adrenalin was overcoming the sleep deprivation nicely!

I switched down a size from the small chicken on the end, and immediately a small grilse came and hit it like a rising trout on a chalkstream, and my first fishing on the Bonaventure river came to hand. Not a monster, but nevertheless a fish! I moved a few more fish but did not manage to hook any others, but by now the sun was breaking through the clouds and the air temperature was rising. I did try a down stream wet fly, but this was met with no reaction from the fish at all, and having seen the whole thing take place with a surface fly I really wanted to persist as it is breathtakingly exciting.

Jean-Marc produced the lunch cooler and as we sat eating hot chili cooked on the back while sipping a little red wine he explained further the theory behind their winning technique here. The pool must be fished systematically to find a fish that will rise. The size of fly is also important as the larger flies will often get them going to make them hit a smaller fly immediately afterwards. I fished the next pool down after lunch, and although again I had several fish come and look at the fly, one actually trying to eat it which I again with precise precision managed to extract the fly from its jaws at the right moment. Time flew by, and before I knew it tea time was approaching. 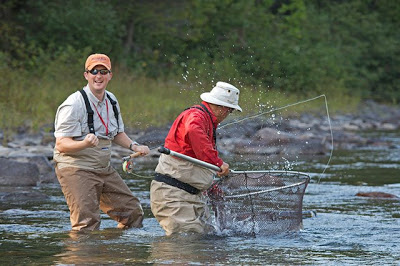 Our little group them moved down to a pool called Eleanor that due to it being a little way down the bank did not receive much pressure. Jean-Marc had been down earlier,and using his periscope had actually seen 20 or so fish in the pool. Very cool. The visual aspect of this fishing is staggering. First cast was met with a big swirl. Second cast saw a fish rise of the bottom and bulge under the fly. Third cast, a little further out, and I watched the fish move up in the water column, open its mouth, engulf the fly and descend as I set the hook. Trout fishing… for salmon!…. with a 6 weight. I nice little grilse of 5lbs or so. I immediately lost another at the hand. 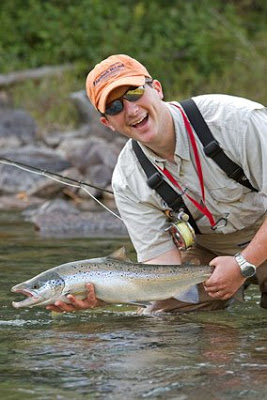 As the sun came off the pool I switched to a hitched tube the skated nicely across the water. It was attacked immediately by a nice little salmon that gave me quite a battle on the 6 weight. The pool came alive, and nearly every cast was being met by some kind of reaction. The finale to the session was a large 20 – 30lb cock salmon that proceeded to attack the fly four times accompanied by ooohhss and aaahs from the bank. At this point I reeled up and we headed for home. I had experienced surface fishing for salmon like never before, and quite a baptism of fire. Can’t wait for tomorrow!