Our operators in Australia have just announced their exciting new fly fishing options for September/October/November 2018. From mid-2018 onward fly fishing anglers will be able to join any scheduled trips at the standard rate with exclusive use of the new 19 ft centre console and experienced fly fishing guide. We require a group of two fly fishing anglers for this arrangement, and if you are a single angler, let us know your preferred date and we’ll advertise the remaining spot to our fly fishing database. 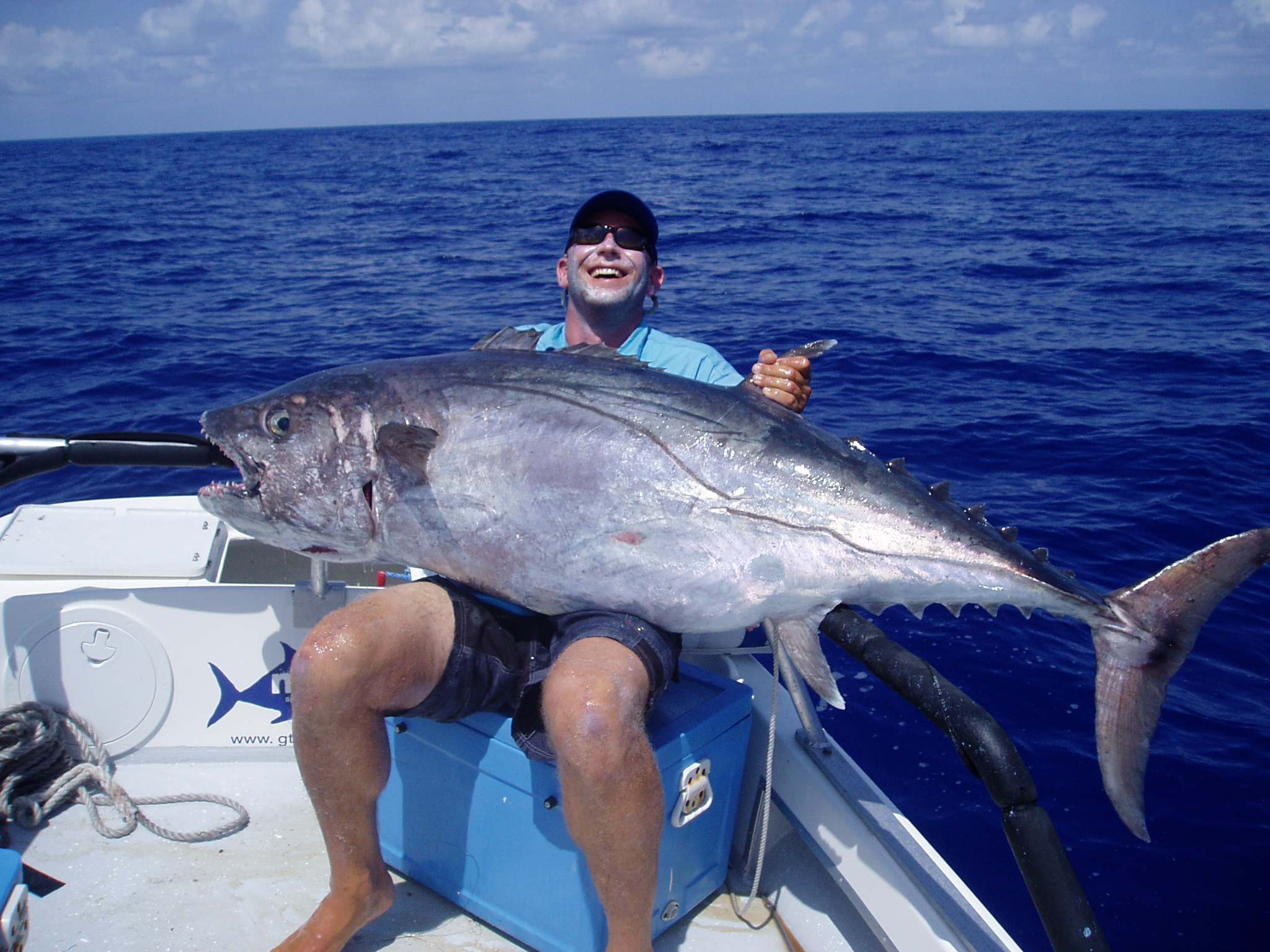 LOCATION DETAILS
Lagoon Explorers – cover a massive area including Escape Reef, The Ribbon Reefs, Jewell Reefs and Howick and Ingram Islands. We mix up the fishing between these areas based on tides, weather and fishing and simply go to where the action will be best each week. With over 150 miles of the outer Great Barrier Reef and a maze of inshore islands and reefs to fish, this area has an amazing array of fishing on offer, and the huge area allows us to move location on a weekly basis to ensure that every location receives minimal pressure. The entire region is very remote and offers fishing for GTs, sailfish, marlin, mackerel, coral trout, red bass, wrasse, emperors and the entire host of northern reef species. The islands in the northern sector offer amazing sand flats to walk and sight cast to cruising fish, while the southern reef flats offer spectacular shallow water casting. The quick and reasonably priced transfers through Cooktown make these trips ideal for shorter 3-4 day fishing trips, while still giving access to spectacular fishing options.

Far Northern Explorers – These trips operate in a massive 200 mile stretch of the northern Great Barrier Reef including Bligh Reef, Margaret Bay, Forbes Island, Five Reefs and the Claremont Isles. We will choose which region we fish on each trip based on weather and tides to ensure the best possible experience for each group. Bluewater options available include GT fishing, lurecasting the reef flats, deepwater jigging, marlin trolling and general bluewater sportfishing. There are serious GTs in this area and it does still hold the Nomad record with most GTs caught in a day in one boat at over 60 between 3 anglers. But while the fishing for GTs at Bligh Reef can be absolutely spectacular, it’s the huge diversity of species you can be catching that brings anglers back to this area. Around the Claremont Isles, it is possible to be walking a sand flat and sight casting to a GT or Golden Trevally in the morning, and then trolling a reef entrance in the afternoon for a dogtooth tuna, with maybe a spot of lurecasting on the reef shallows on the way. The common reef species that you’re likely to catch include coral trout, red throat emperor, long nose emperor, spangled emperor, red bass, wrasse, maori sea perch, bluefin trevally, many varieties of groupers, green jobfish, big eye emperor, and the list goes on and on. Then there are the Margaret Bay and Forbes Island areas where the scenery is just as spectacular as the fishing and there’s an overlap of inshore species like queenfish and fingermark mixed with GTs, mackerel and Tuna. This is a truly diverse area, and offers immense variety in locations, scenery and fishing styles unmatched in any other region. 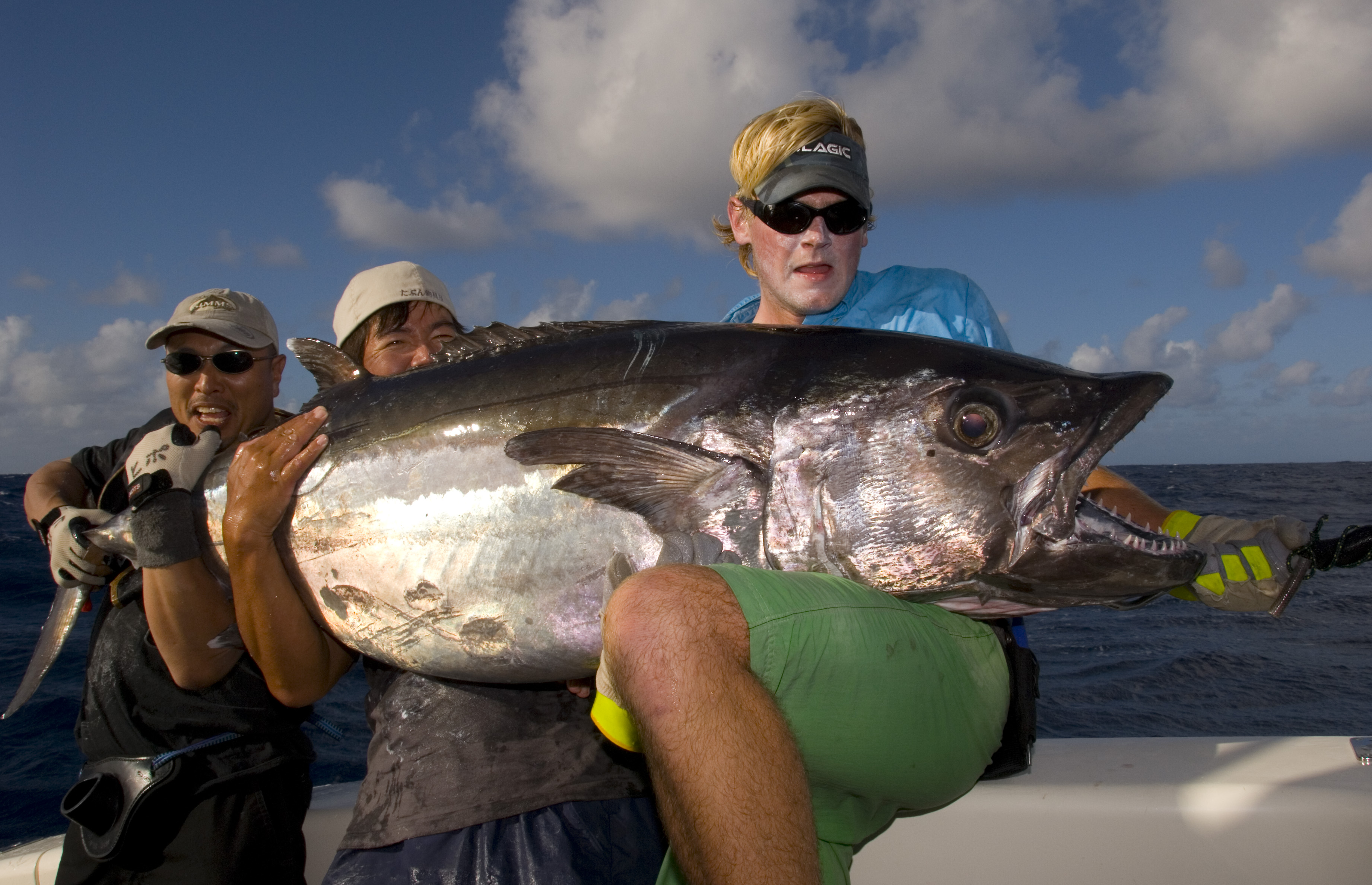 Torres Strait Explorers – Watch the distant mountains of Papua New Guinea drift past as you fly into the remote Torres Straits to fish the northernmost Coral Reefs in Australia. We’ve briefly fished the fringes of this area on previous trips to Ashmore Reef, and the action we have so far seen combined with the incredible reef structures and great anchorages makes this new location a must visit destination. The Warrior Reefs have long outer edges to cast combined with stunning blue holes, gutters and reef drains that are teeming with big GTs, mackerel and other reef critters. The Hibernia Reefs are a maze of reef, very similar in structure to the Elusive Reef system we fished many years ago on the southern Great Barrier Reef, and have produced huge GTs, Wrasse, coral trout and spanish mackerel. Then there’s the isolated northern atolls in the group that rise from hundreds of metres to form small sand cays – these cays are home to truly giant dogtooth tuna and GTs of unstoppable proportions. This is such a vast area that only small parts of it can be fished each trip, and it will take months to truly explore the entire area. The 4 annual trips we operate are a special treat, made possible by working with the local Torres Strait community to gain access to an area previously untouched. 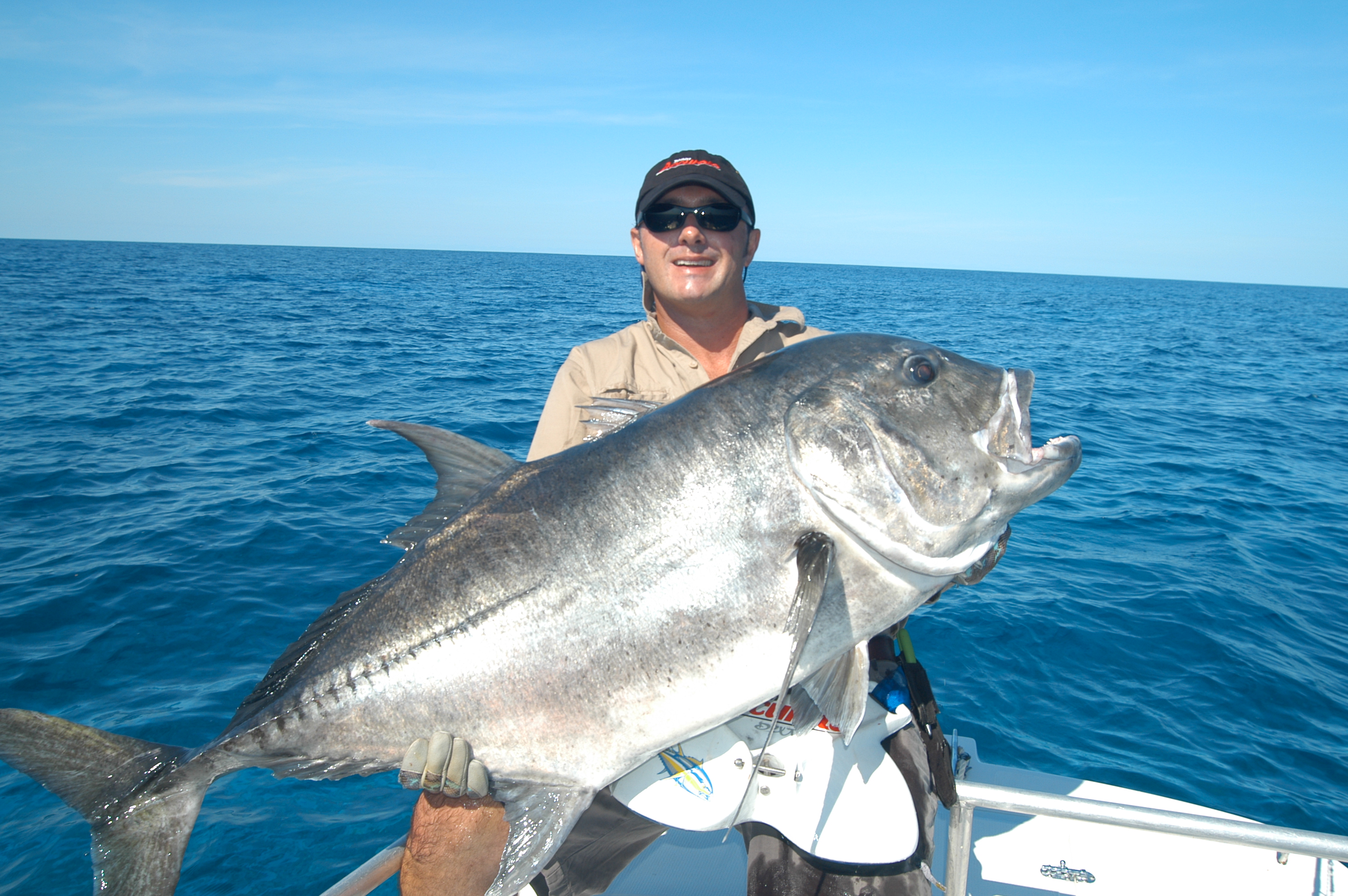 Tydeman Reef and Princess Charlotte Bay Offshore reefs, sand cays, inshore islands, headlands and creeks – so much to explore in just a week, and seeing it all in one trip rarely happens due to the diversity of options. There’s the Flinders Island group to explore, and the amazing outer reef sand cays to walk with a light spin rod, endless reef flats to drift and cast, reef passages to troll or jig. In February and March these trips can also include fishing the revered headlands and rivers of Princess Charlotte Bay. You could be catching barra and queenies from the headlands in Bathurst Bay one day, then battling huge dogtooth tuna and GTs on the outer reef the next day, even the same day if you were so inclined. The reefs just to the north west of Tydeman offer spectacular sand flats and a mix of inshore queenfish and mackerel mixed with GTs cruising the flats. It is an area of endless opportunity. 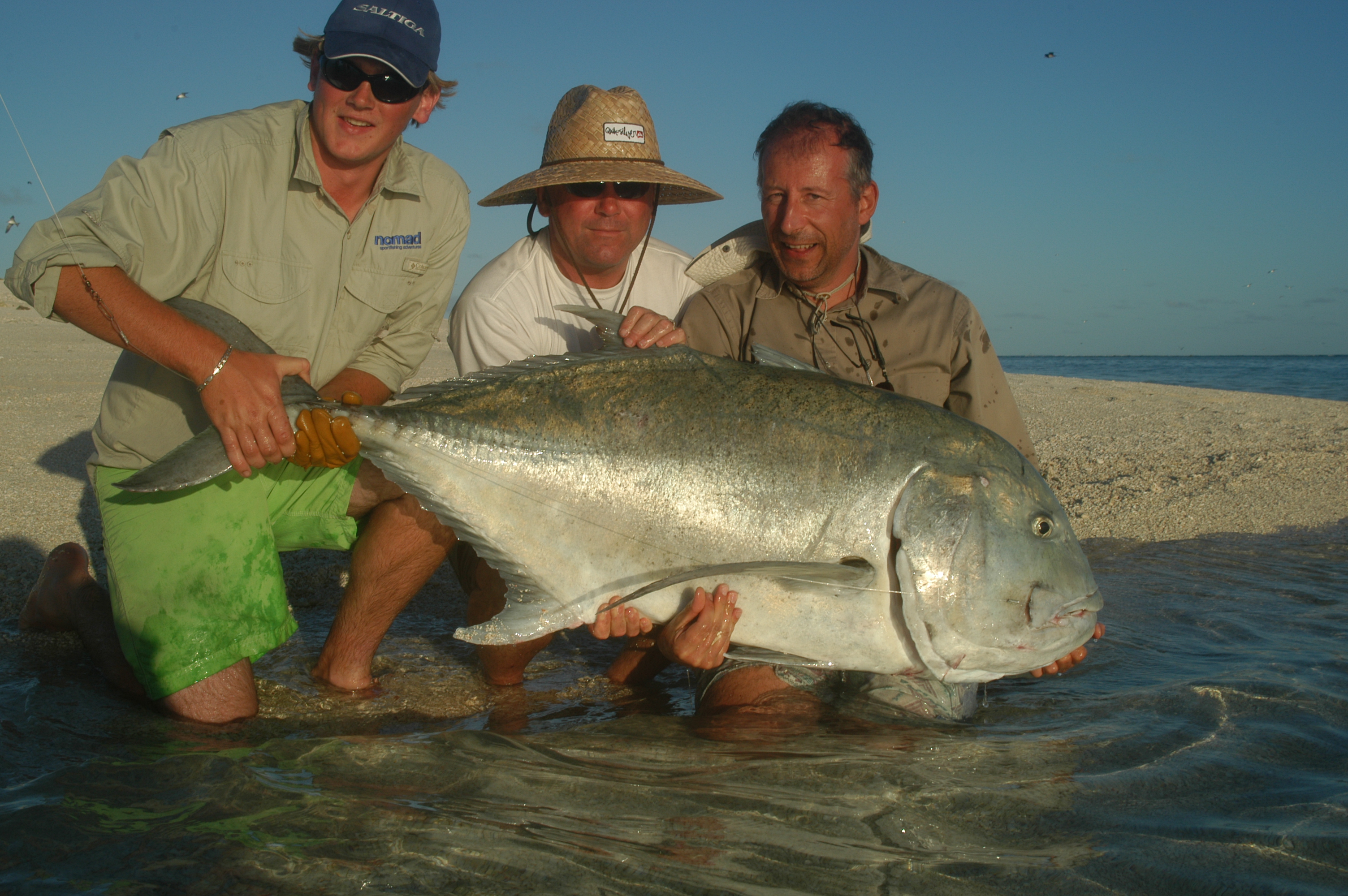 The Northern Pandora Reefs Situated to the east of the tip of Cape York, the Northern Pandora Reefs feature a maze of reef structure with narrow channels and strong current pushing through. Start the day with an early morning troll in one of the reef passages, where massive Dogtooth and Yellowfin Tuna, Wahoo and Sailfish are all very likely, then spend the morning on the shallow reef flats catching huge numbers of Coral Trout, Red Bass, Emperors and all sorts of other reef species, and follow that up with an afternoon GT session to get your arms stretched, or just take a leisurely troll on the inside of the reef for some of the big Spanish Mackerel that live in this area. 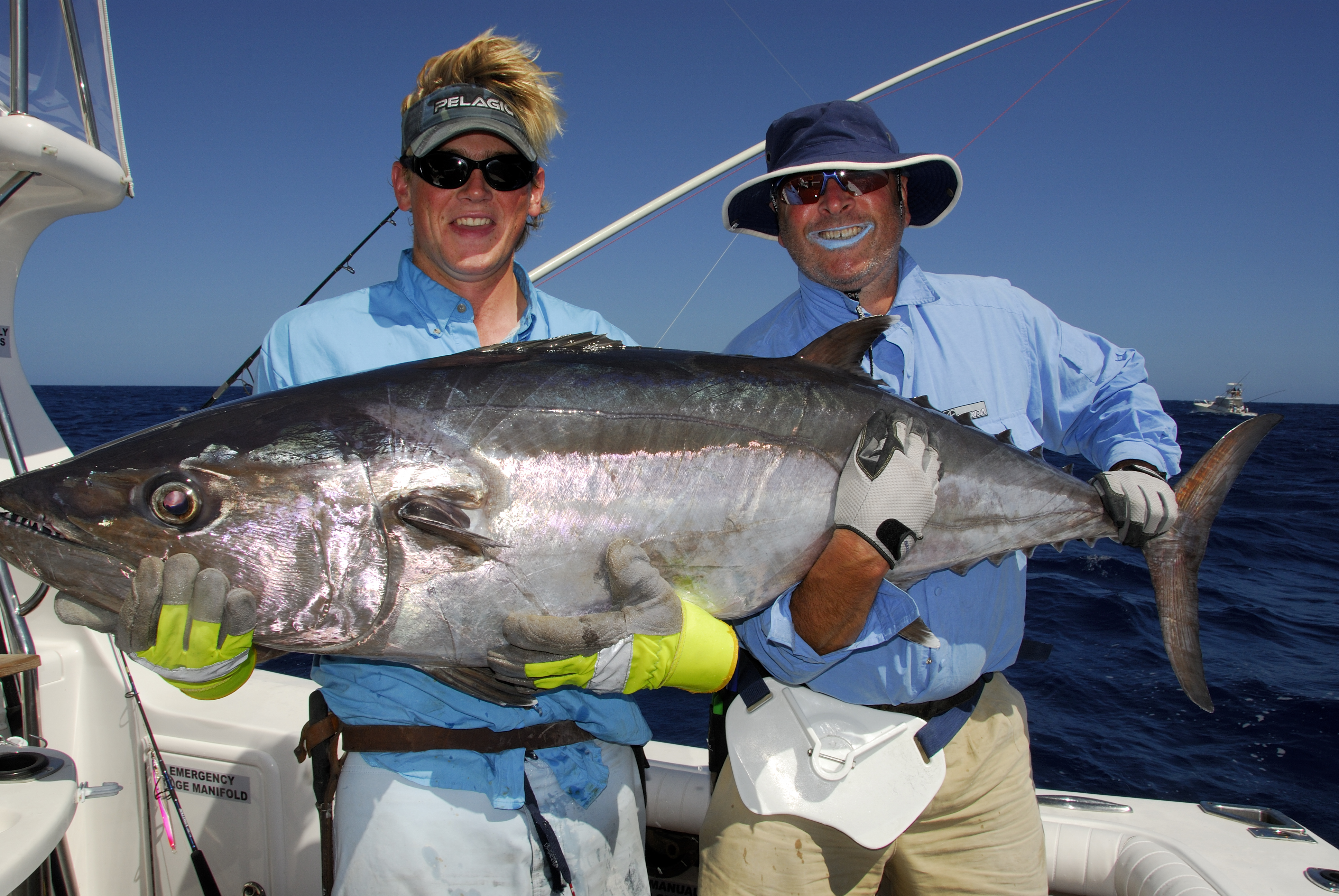 Ashmore Reef – Ashmore Reef, located to the East of the Torres Straits is a large atoll in the northern Coral Sea, and unquestionably one of the most prolific fishing locations we’ve ever been to. The atoll rises from over 500m of water to a 25 mile long roughly oval shaped atoll with a small fringe of shallow reef around the edges. The fish will sit on whichever end of the reef the current hits, and when you find them, get ready for action. The reef passages funnel the current and are home to dogtooth, GTs, marlin, tuna and wahoo. This is one of the most remote fishing areas that you can access in Australia, and it can only be visited during periods of very calm weather due to the marginal anchorage. We schedule the trips annually to coincide with the best weather windows so that we can access what has proven to be the most consistent location we visit for monster GTs and dogtooth tuna. The wahoo and yellowfin around the reef edges are also prolific. It’s hot weather, with often very serious fish, so come prepared for an adventure.

The dates in September/October/November 2018 that we would recommend for fly fishing are:

4-6 NIGHT PACKAGES
Like the sound of easy access and 3 to 5 days fishing in some of the world’s most remote coral lagoons and GT fishing locations? Then the 4 to 6 night packages are for you.

We have three packages to choose from:
Lagoon Explorers – encompassing Escape Reef, the Ribbon Reef and Jewell Reef ex Cooktown (US$4,175 – US$5,700 per rod)
Far Northern Explorers – encompassing Bligh Reef, Margaret Bay, Forbes Island and the Claremont Isles accessed ex Portland Roads. (US$5,400 – US$6,700 per rod)
Torres Strait Explorers – This new location for 2018 is in the remote waters of the Torres Strait, departing ex Masig Island. (US$6,250 per rod)

7-8 NIGHT ULTIMATE ADVENTURES
If you prefer an extended trip, the Ultimate Adventure packages offer 6 or 7 days of fishing at exclusive locations only available for 1 to 2 Ultimate Adventure trips per year. Our Ultimate Adventures schedule also includes a limited number of travel trips, visiting multiple reefs in the one trip as we move up or down the isolated eastern coastline of Cape York.

If you would like more information on fishing in Australia please contact Peter McLeod or call our office on +44(0)1980 847389.