Back on Los Roques, Venezuela – Day 1 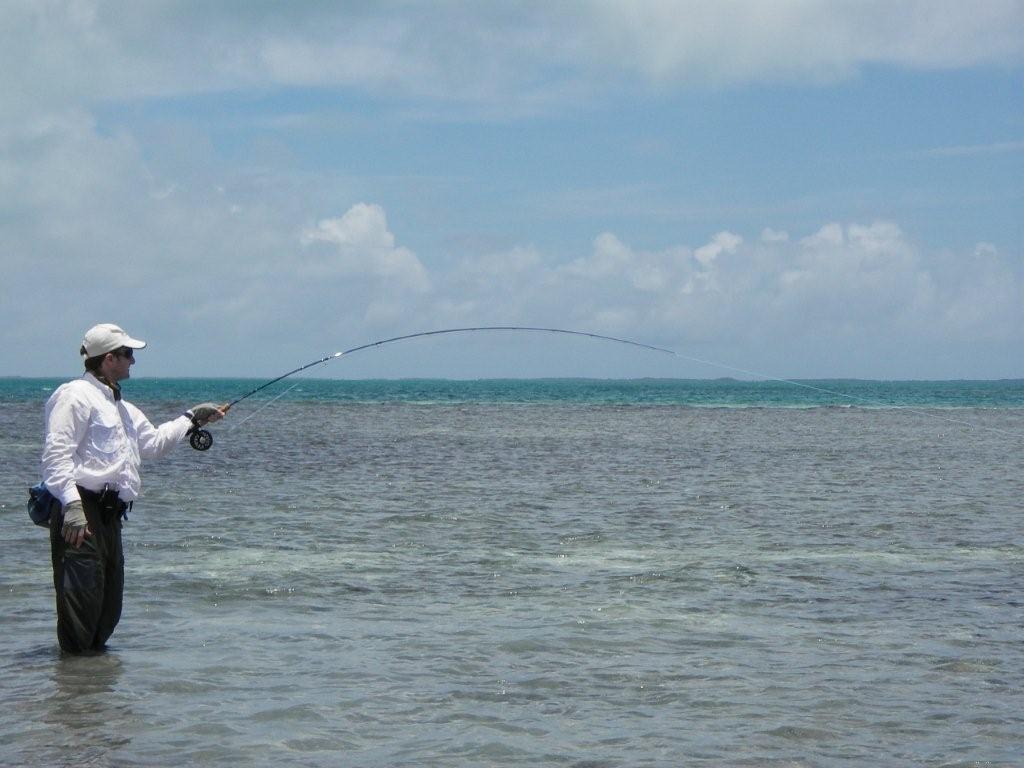 I am back on Los Roques in Venezuela for my annual hosted bonefishing trip, and it is lovely to be back on the island amongst old friends. The journey out on Lufthansa was very painless, and after a brief stop in La Guairá for the night we flew over to the islands on the LTA flight and once again I find myself amongst the pelicans, minnows and a bonefish. This year everyone was out the door after breakfast in record time as most of the group fishing this week are old hands and experienced fishermen.

I fished with Phil Mellor today and our guide was Rapheal. The weather was a little cloudy with patchy sun and being the last boat out we headed straight over to the main channel to the back of Augustine Cay to a fantastic little flat. Immediately we saw a few fish and Phil headed off towards a coral outcropping with Rapheal as I waded towards the mangroves. Immediately they saw a few cruising against the edge and made a few cast, but Phil failed to connect.   A large rain cloud appeared and proceeded to dump some warm rain on us, and almost immediately Phil turned, saw a fish tailing in the rain and connected. The rod bucked and the fish tore down the coral edge with Phil holding his rod high to keep the leader away from the coral. After a brief struggle he landed his first fish of the trip, a cracking 6 lber.

We carried on walking down the edge towards the small shacks that the lobster fisherman use here and just on the other side the two of them came across a snapper carcass that was being eaten by a group of bones well into double figures. Phil cast out his large gotcha and one instant pounced before tearing of under the boats. Despite Phil sticking his rod under the water to try to remain connected the pressure was too much and the fish kindly released him. This is the same Vicinity that Tim Aldiss caught his 14 lber last year, and there always some huge resident fish in the vicinity, attracted no doubt by the lobster detritus.
We moved to the pancakes and Phil and I both picked up a fish or two from some giant schools there weighing in at about 3 – 4 lbs. With the tide being slack thought the fish were very nervous and would not settle. 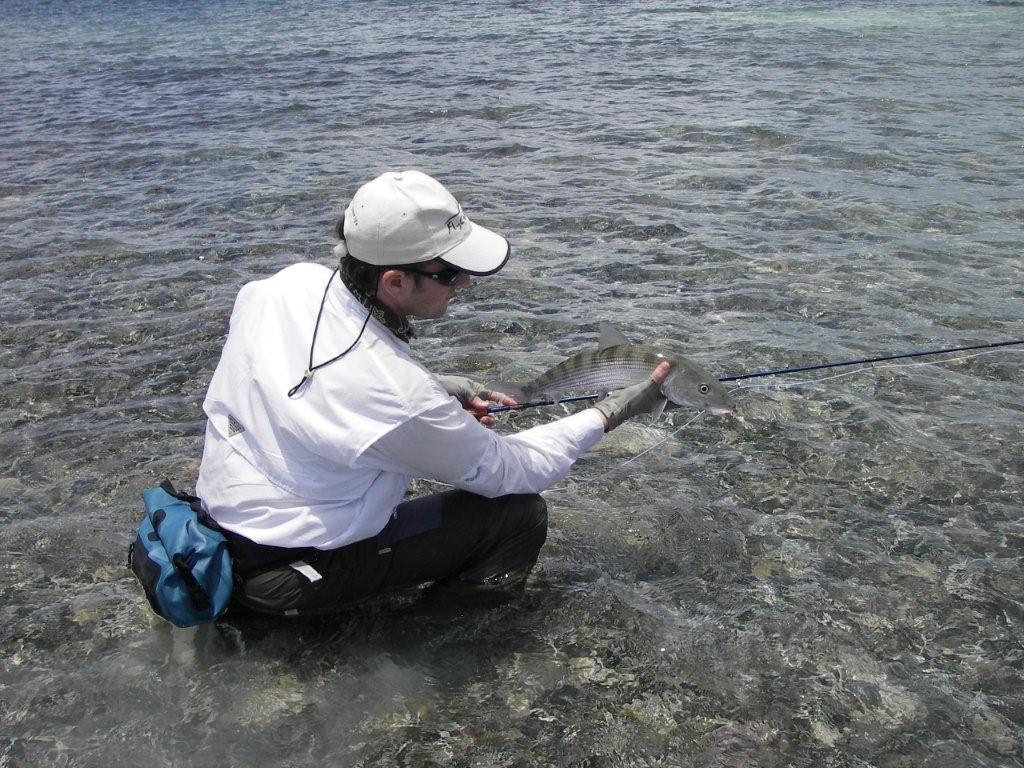 By this stage the tide was nearly full and becoming increasingly slack, and while having lunch on the move we moved round the back of Espenqui for a long walk over the hard flats here. These flats are absolutely solid under food, but the water was just too hot and apart from the odd fish moving at speed we saw very little. I have done this on a number of occasions and it is always boom or bust…. and in this instance I knew it was going to be a bust… After rehydrating on the boat Rapheal and I plotted to spend the last hour or so on the pancakes as the tide was just on the turn.

The first pancake flat we waded the sun was right in our eyes with the wind at our backs and we stepped on every fish before we could see them. There were plenty of fish about though as they waved their tails at us in salute closely followed by giving us the fin! I then turned round to Rapheal and said that we would do the next one in reverse into the wind. Now it was as if someone had turned on the lights and the entire flat was lit up. Granted casting directly into the wind presented more of a challenge, but by using a high back cast and keeping a low forecast it is possible to tuck the line under the wind and I immediately spotted three cruisers heading towards me. I punched line straight up about 15 yards and dropped the fly on a sandy spot as they came on. When the fish was a foot away I gave it one small tweak and the fish instantly turned and snaffled my size 12 bonefish bitters. Well, he was not expecting that and charged up the flat instantly stripping me down to about 80 yards of backing before heading off the edge into deep water. Incredibly exciting and exactly why I love it here. Although it felt huge it turned out to be again only about 4 lbs on the boga grip.

Phil and I then were treated to a show that I have only witnessed on a handful of occasions. As the light dropped the entire pancake was covered on waving tails jogging in the evening light. We just did not know which way to cast as we were just surrounded with tailing fish. The trouble was very time you cast at one you lined another bunch that spooked, and even though Phil only hooked up one more it was a delight to behold. Time to head home.. a perfect end to the first day.

Arriving back at the lodge I did a quick head count and everyone had got off the starting blocks satisfactorily. I was especially pleased that John Thornton landed his first three bonefish ever, and was still in a state about having been nearly stripped of all his backing by his first fish. In total the group landed over 40 fish for the first day and we settled in for our first outstanding dinner from Mimo. Can’t wait until tomorrow!