Bahamas; a Delphi Lodge, Abaco, update with a difference

This season’s shutters have now rolled down at the Delphi Club, marking the end of our seventh eventful season. And it ended on a particularly high note, with a family house-party that will be remembered for a long time to come. 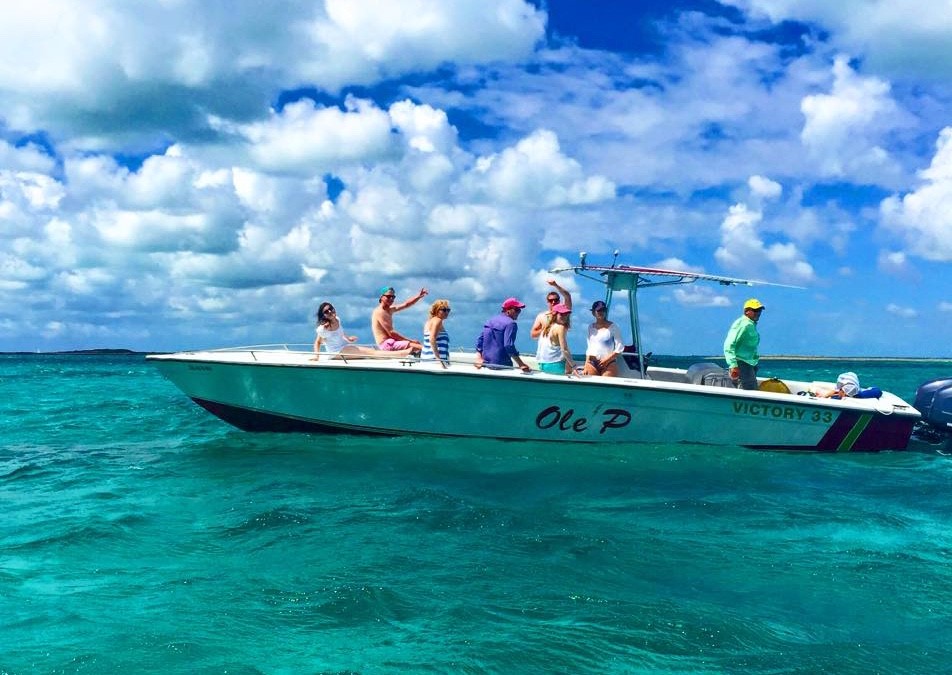 The Royal Agricultural University in Cirencester, England is sometimes referred to by the red-top press as the Oxbridge of rural sciences – not, I suggest, for its production of brilliant Nobel laureates, but more for its fine architecture and the sometimes tweedy garb of its students. But where its real fame lies is in the extraordinary, legendary, world-class, gold-medal-winning capacity of its students to party.

Drop fifteen of these RAU students into Abaco for two weeks of fishing, fun and frolics and you end up with a combination of Dead Poets Society, Animal House and Hangover 2.  Of course, they were charming and equipped with impeccable manners. But their all-round vim and eagerness to try anything provided Abaco with a challenge –  to demonstrate the breadth of its menu of fun activities. And Abaco delivered. 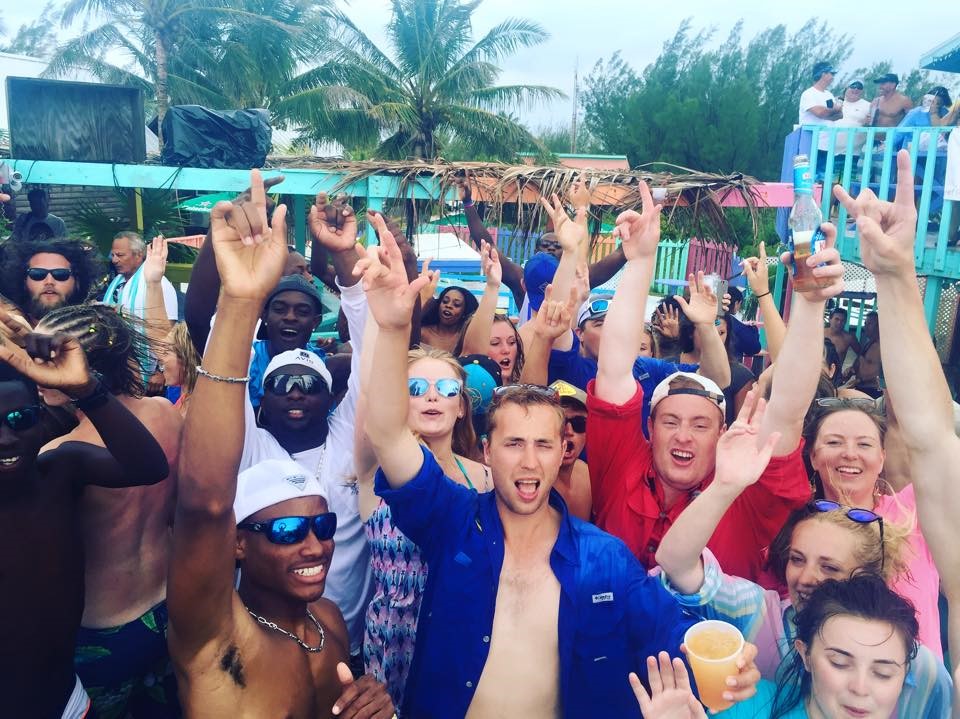 An island-hopping boat trip, with multiple stops for reef snorkelling and, yes, more beer, featured tours of the ancient Hope Town lighthouse, the sail workshop on Man O’War Cay, the culinary offerings of Lubbers Quarters (conch and fresh tuna to the fore) and water-sporty antics of every kind.

There were, inevitably, outings to all the beach bars – Nippers on Guana Cay, Pete’s Pub in Little Harbour, Nancy’s in Sandy Point and Coco’s at Treasure Cay. But all trips involved more than just eating and drinking; there was acrobatic diving – into freshwater blue holes, off docks, off the back of boats, off anything – as well as dancing, singing and fraternising with whoever came along (including persuading many locals that the visiting mob was an international rowing eight that had rowed across from England). 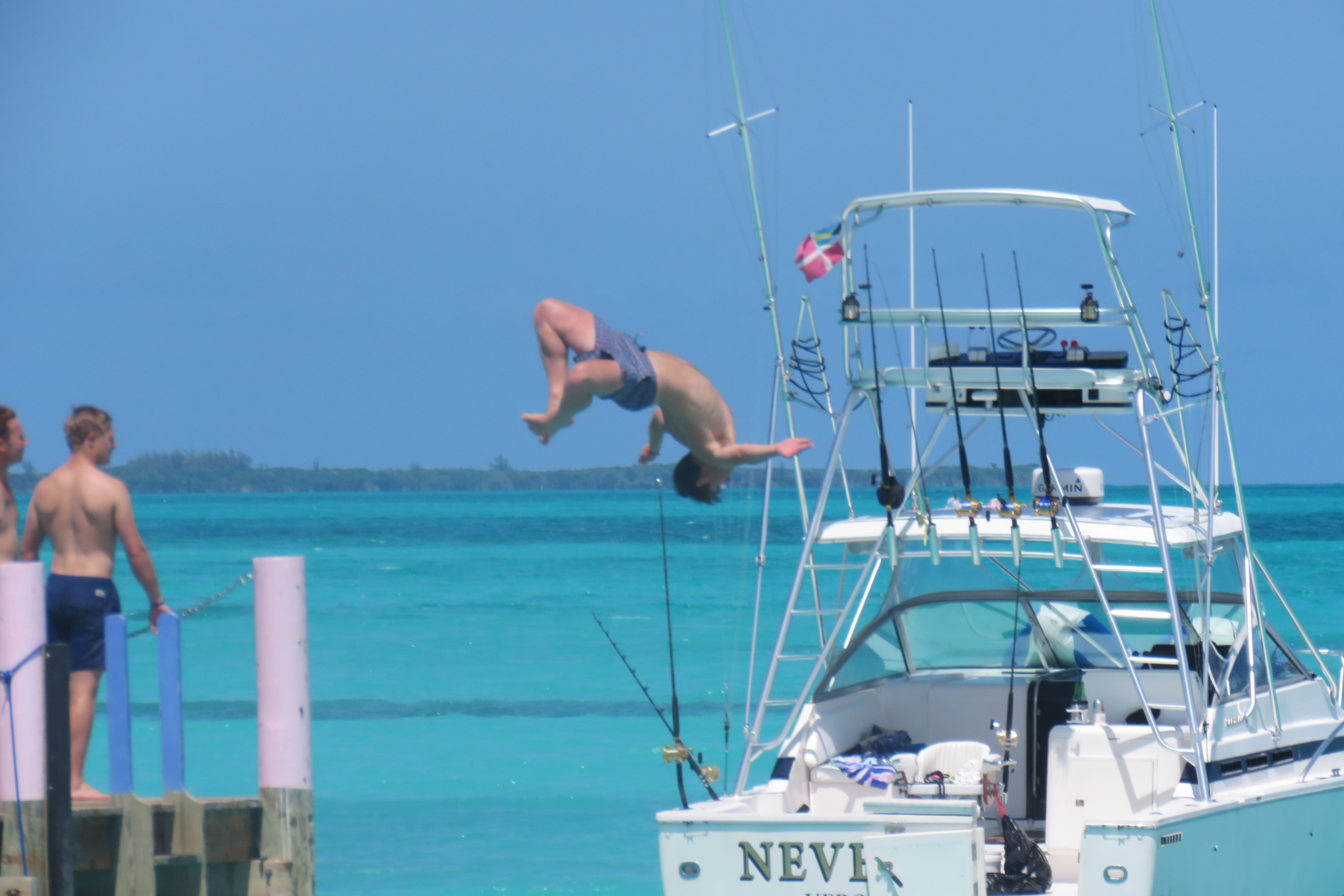 There was offshore kayaking, body-boarding, water polo, beach cricket, volley-ball and rounders (baseball’s British ancestor). There were bonfires and fireworks, along with copious midnight star-gazing. When all else failed (and for reasons that remain largely unexplained) the boys dug giant holes in the beach – a farming thing? 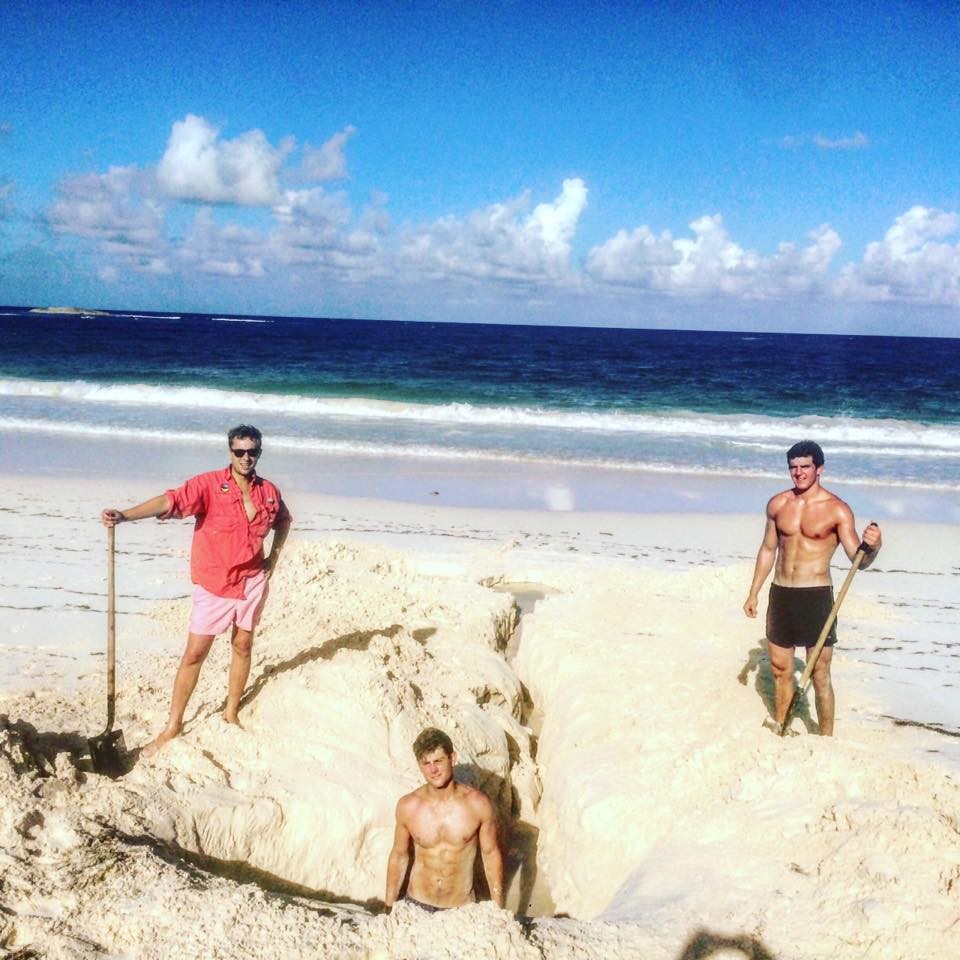 Fishing, however, remained the central theme. Many of the nine boys were fly-fishers, although few had ever fished in saltwater before and a couple were complete novices. Happily, Alec, Ferg, Hugo, Henry, Jack, Peewee, Sparky and Zander all caught loads of bonefish, sharks and barracuda, and much more besides, as did those of the girls who took to the water, with Emily’s big cuda and Millie’s brace of nice bones particular highlights. Only Sam, a novice, failed to score, piscatorially at least, in his two outings – it can happen. 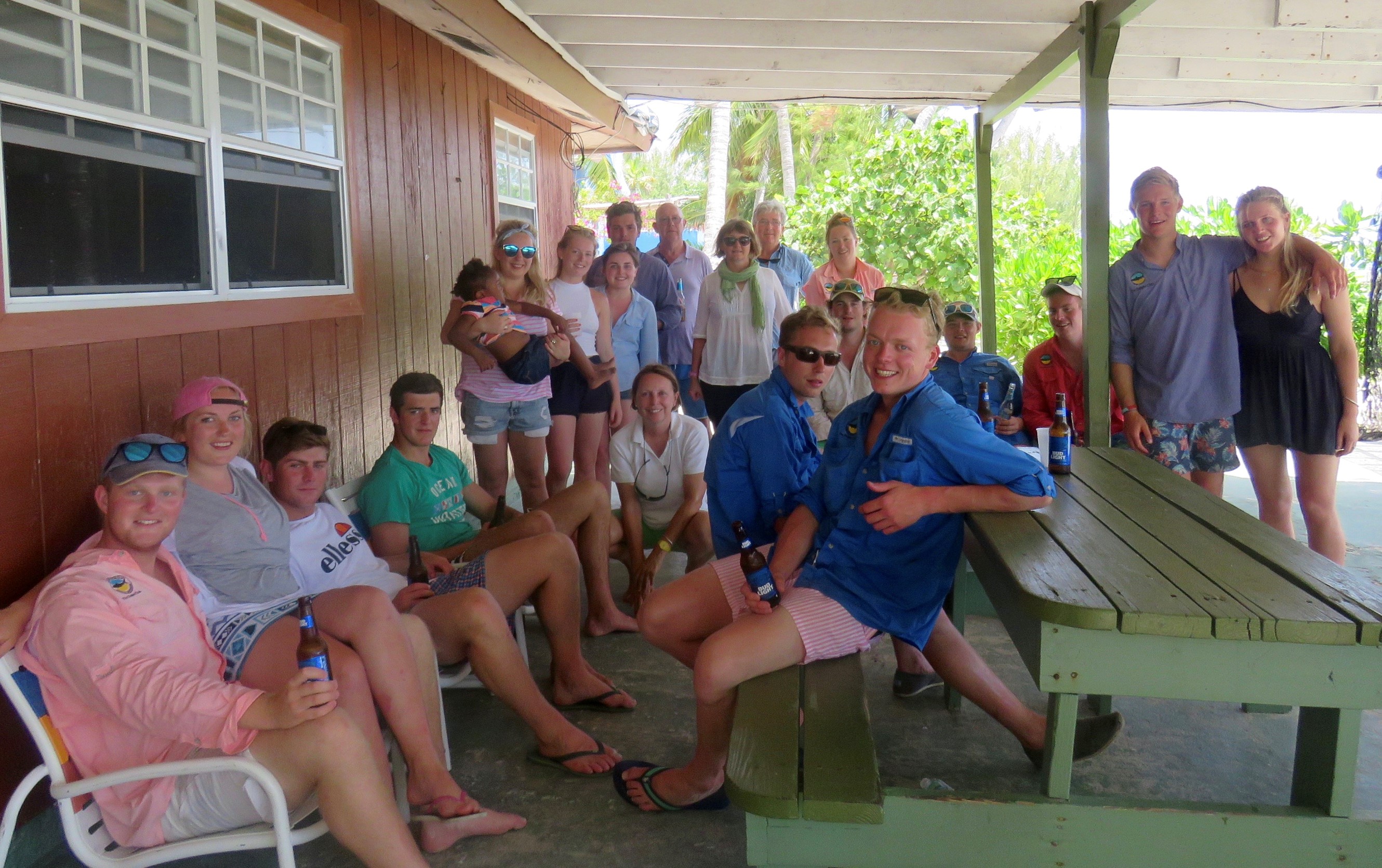 And dear tweed-capped Henry lost half of his first cuda… to another bigger cuda. 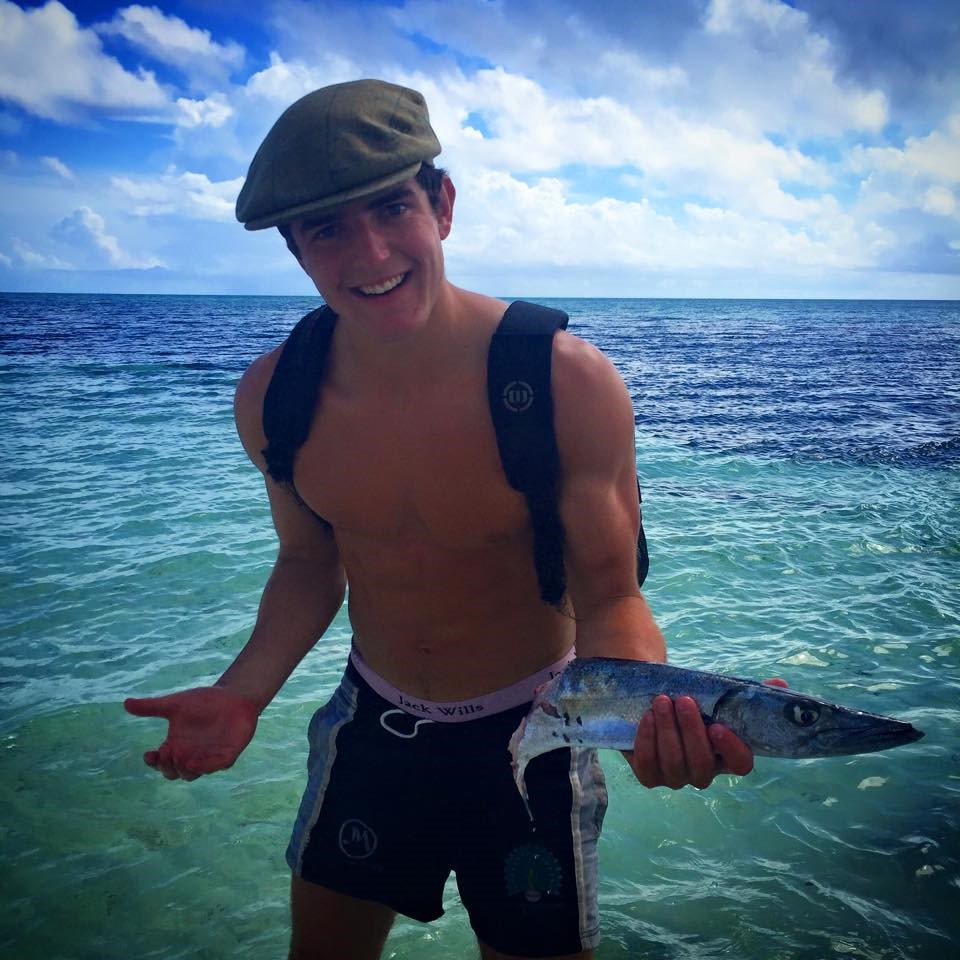 Jason in the kitchen had, somewhat reluctantly, to un-refine his menus a little to cater for the gargantuan appetites involved, but it gave him an opportunity to unload surplus stocks of just about everything, while Max the manager was busy restocking the bar with beer, Baileys and Bombay gin on what seemed like an hourly basis.

The whole fortnight was in striking contrast to the Club’s normally more sedate and sophisticated focus on entertaining an older generation of fisherfolk and their non-fishing friends, for whom birding, butterflies and good Burgundy replace a billion Blaster cocktails.

For more information on this destination please click HERE.