The season in the land of fire and ice continues in much the same vain at this point in early August and it has mostly been fire. With blue skies and soring temperatures conditions have not been ideal for salmon fishing.The West coast is still desperately short of water, the north coast is having a solid season along with the southern rivers, and the East coast rivers are having a much better season, although have teetered on the verge of having too much water. It is extraordinary to see such extremes only 300 km apart. Since our last report Peter has returned with his group from Laxá I Kjos and Steffen has just finished at Hafralonsá and is now fishing the trout beats of Laxardal with his group. 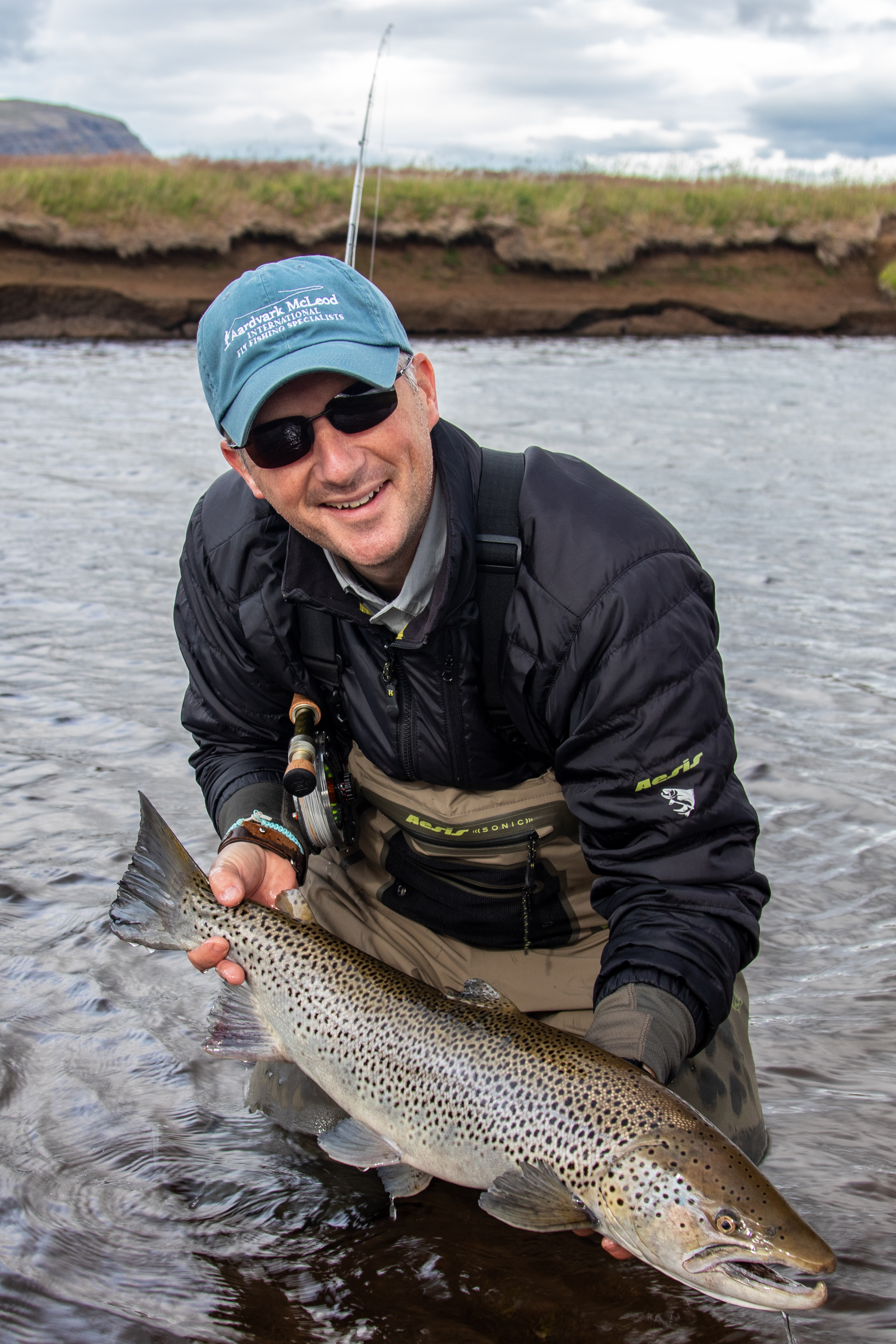 The Laxá I Kjos is still very low, but Peter and his group made the most of it and had a great time fishing outside the box. Many of us were introduced to the technique of upstream nymphing salmon under the expert guidance of Sibbi, Raven, Katka and Ollie. Combined with light leaders and fishing tiny hitched tubes across some of the lower pools. This produced a lot of hook ups, but many fish were lost in the battles as fish and angler parted company. The sea trout fishing in the meadows was hugely entertaining with some very large fish up to 74 cm landed on dry flies and tiny nymphs. This section had a huge quantity of fish in it waiting to run the upper river. The last day we saw some fish in the upper river above Pokafoss which had taken advantage of the small lift in water. Laxá I Kjos has fared well despite the incredibly low water and our group landed 9 salmon and over 20 sea trout, but lost nearly 30 fish. 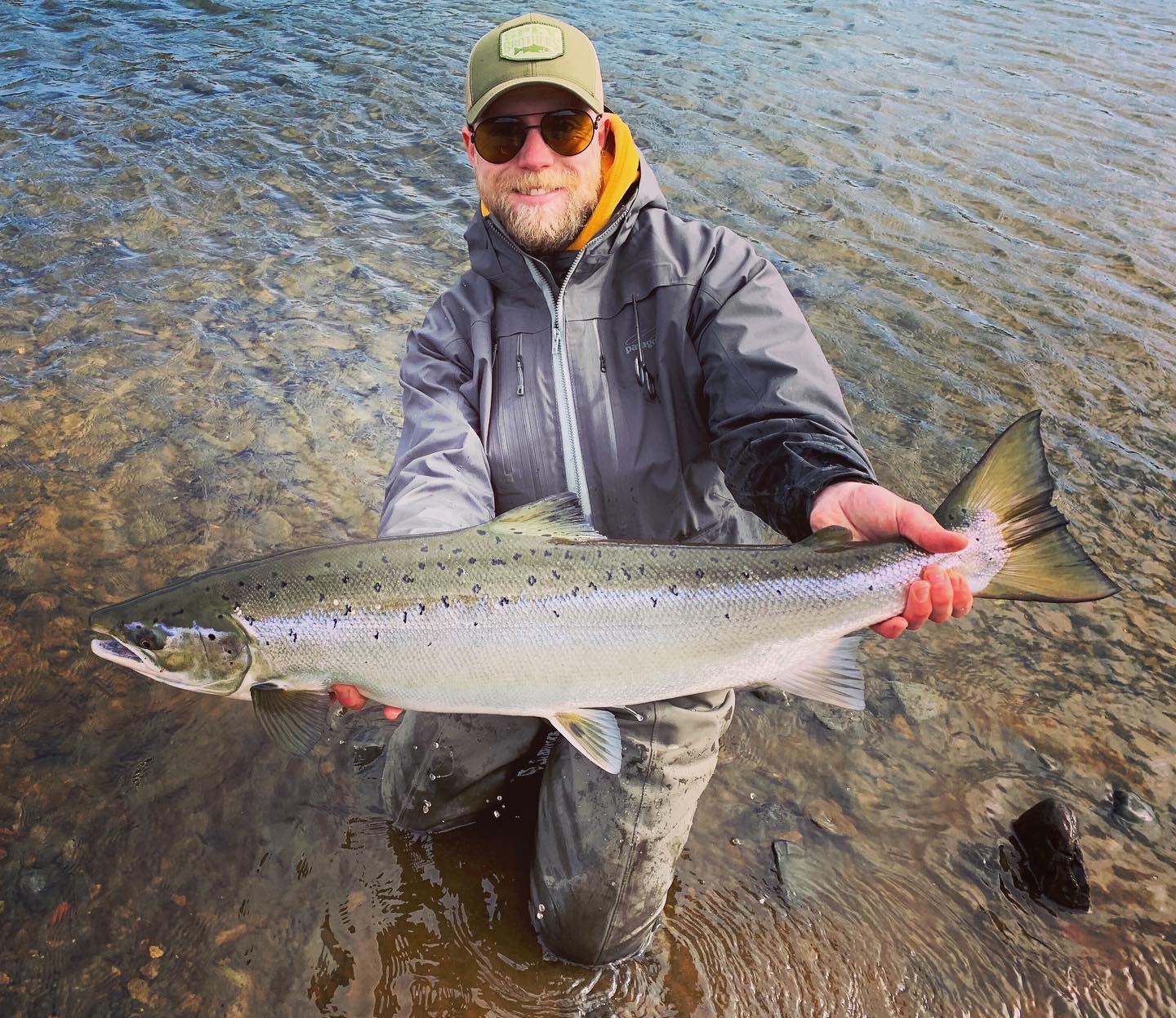 The Midfjardara has also battled with conditions, but continues to produce fish. Water levels are very low but the fish are still trying to run the river. Like many of the west coast rivers they have adapted their techniques and have been experimenting with upstream bombers to tempt salmon which has proved huge enjoyment.

On Hafralonsa Steff’s hosted group has been enjoying near perfect fishing conditions and landed 12 salmon on Sunday with many more lost. The river height is perfect and the numbers running the river are a marked increase on last year. They have also had fun with the impressive char in the river with fish up to 5 lbs being landed. They are now moving over to Laxardal so we look forward to hearing how they get on.

On West Ranga the weather has remained the same and this last week even a bit warmer. Like many other rivers they are waiting for change, but the forecast for the foreseeable future shows very little rain so it is just a question of adapting to this kind of weather in Iceland this year. The tagging programme that started last week has already paid off. Eiki, one of our guides, tagged a fish on beat 3, released it and the day after it was caught again in homepool on beat 3 and released again Maybe the fish will be seen again next year as a two sea winter fish in June. Those that have fished there know they have a live video counter in the lodge from the lower foss. Last night angler saw more than 20 fish in only 1/2 hour, going to be exciting to see if this is the start of the August run.