A ‘perfect’ bonefish session is something that only comes around once in a blue moon. Masses of bonefish dropping off the flats left, right and center often leave guests and guides dumbstruck. With their huge appetite for flies and their long runs, which often see the backing screaming off the reel, bonefish are possibly the most smile inducing fish to target on the flats. We are very privileged that St. Francois lagoon holds one of the healthiest populations of bonefish in the Indian Ocean. This was evident during this spring tide cycle were large schools of fish moved down the flats during the morning drop allowing the anglers to enjoy phenomenal sessions throughout the whole week. 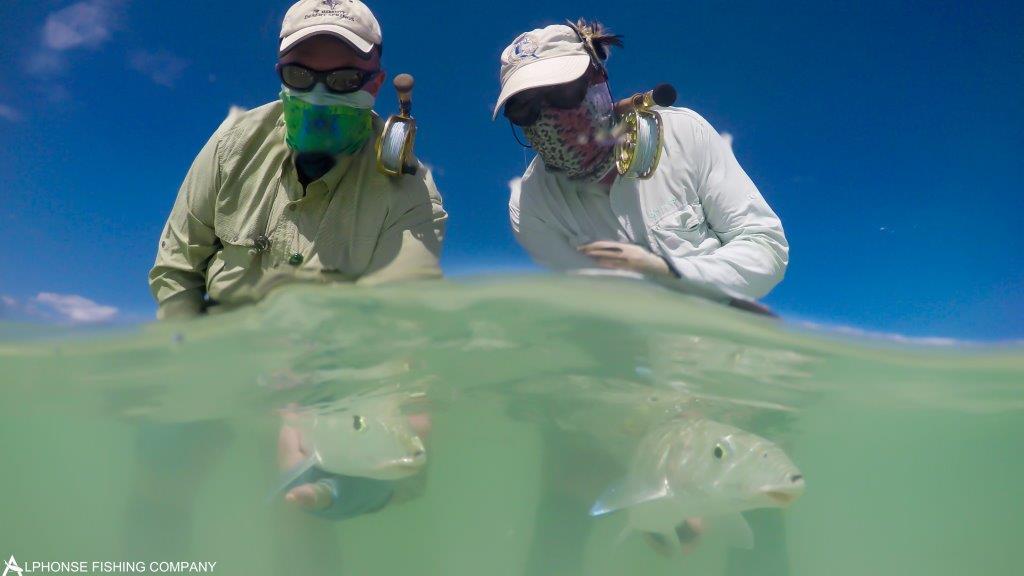 The week got off to a flying start with Charlotte, Graham, Michael, John and Tony all joining the prestigious 20+ bonefish club within the first few hours of day one. The vast schools of bonefish that patrol the sand flats around St. Francois were present for the majority of the week which made them easy pickings for Tim and Peter who further increased the bonefish tally by joining the 20+ club. 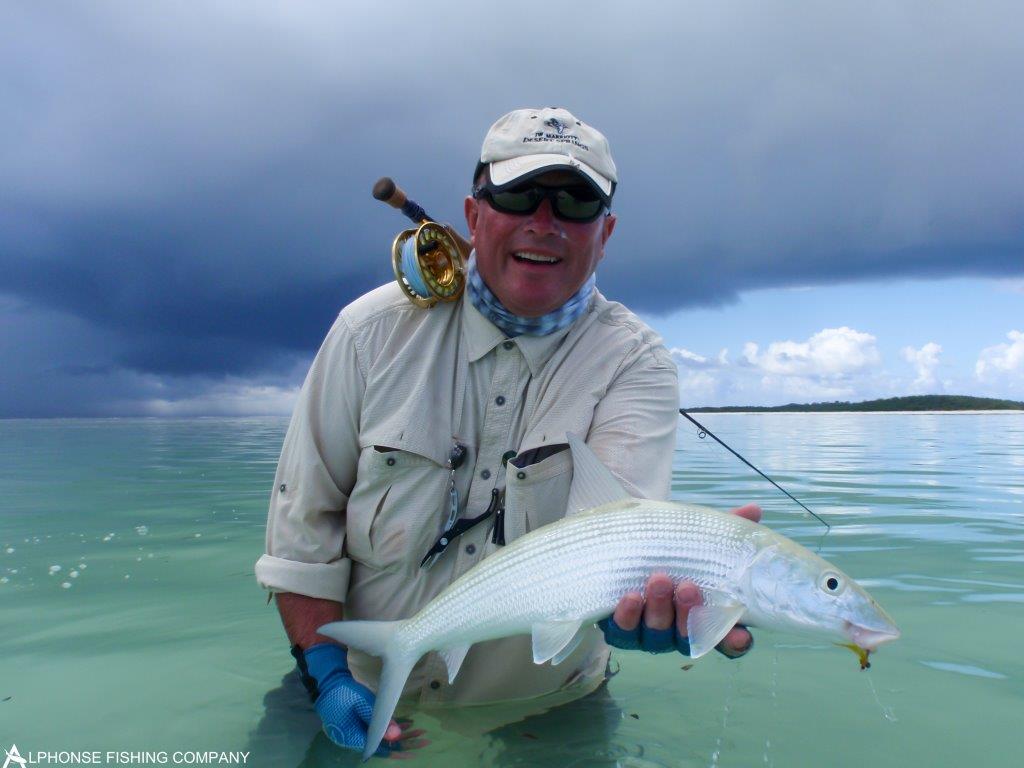 Much of the weeks effort was also concentrated on dredging and popping outside the reef trying to catch some of the more elusive fish that dwell in the depths. Jean started the week off by managing to land a beautiful 70 cm GT. The blue water action heated up mid-way through the week when Peter  managed to add a “Bills and Bones” slam to his huge tally of bonefish. Another very special and rare catch came on the same day when Michael  landed a big napoleon wrasse. 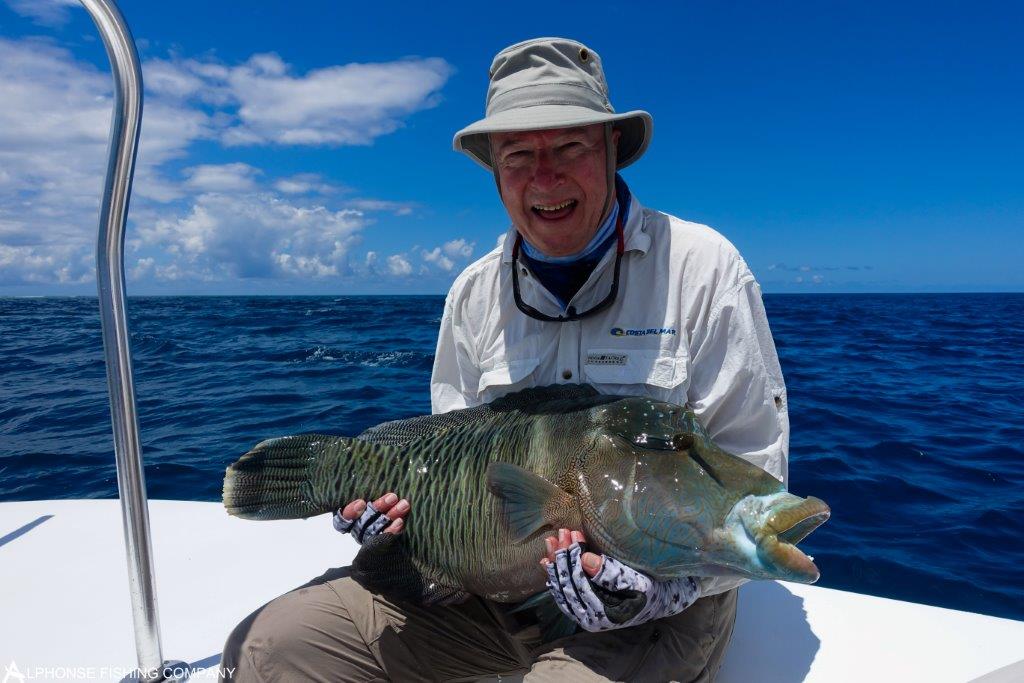 As if the day was not interesting enough Tim  was lucky enough to bump into a school of very large yellowfin tuna charging into a ball of baitfish close to the drop-off. After a few casts Tim’s popper was brutally smashed on the surface and after a grueling 40-minute fight he managed to subdue a cracking 25kg yellowfin tuna. 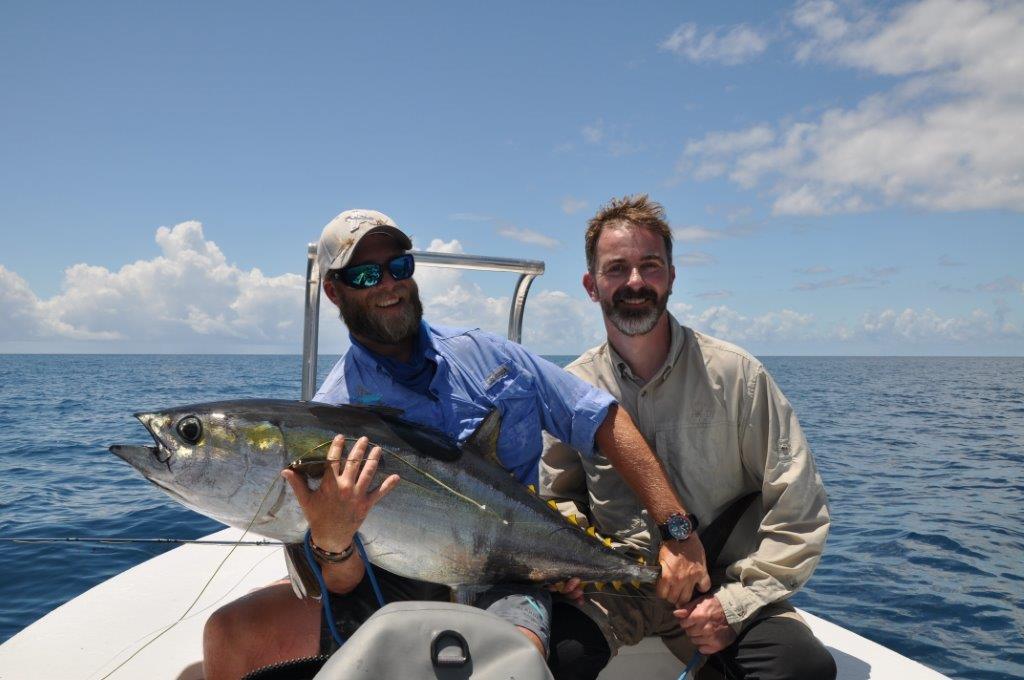 Back inside the lagoon the GT’s were being seen in good numbers pushing onto the flats at the turn of the tide. Tim  took full advantage of this, which resulted in him landing two beautiful specimens of 75 and 80cm. 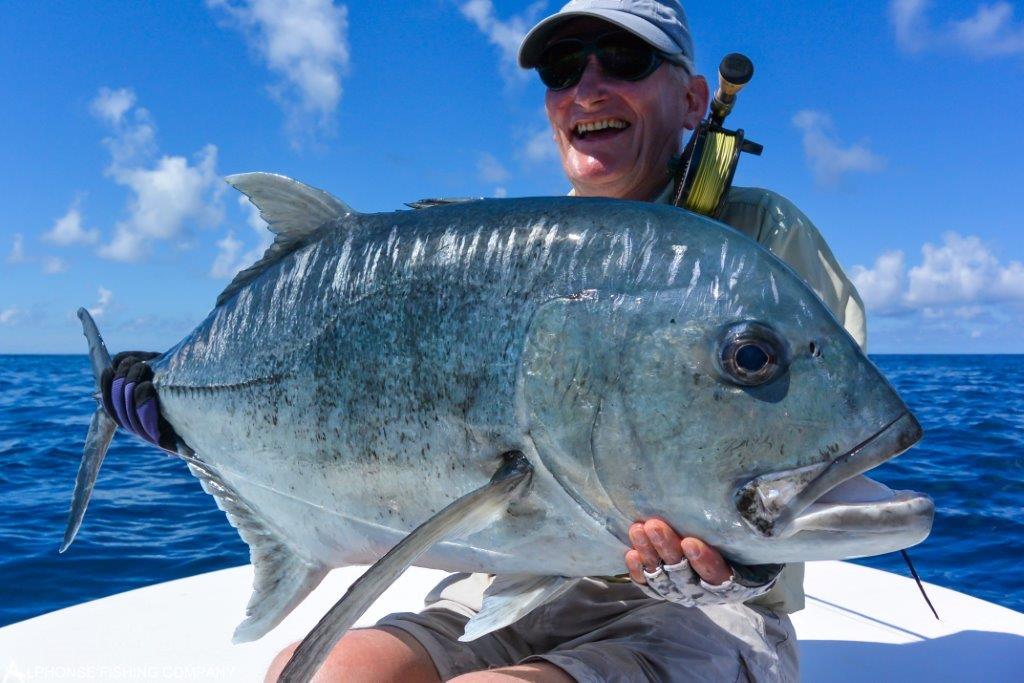 As the week progressed the wind speed began to slow up and this brought about calm conditions on the outside allowing the guides to run around the atoll in search of milkfish. Despite being out in good numbers, the milkfish proved difficult to get close to the boat with multiple hook pulls and line breaks. However, the experienced milkfish veteran Mike ‘Milkfish’ Nowak snuck out on Saturday afternoon and came back with a beautiful 30lb fish. Also to join in on the action was Patrick Boyd who hooked and landed a milkfish within 15 minutes. 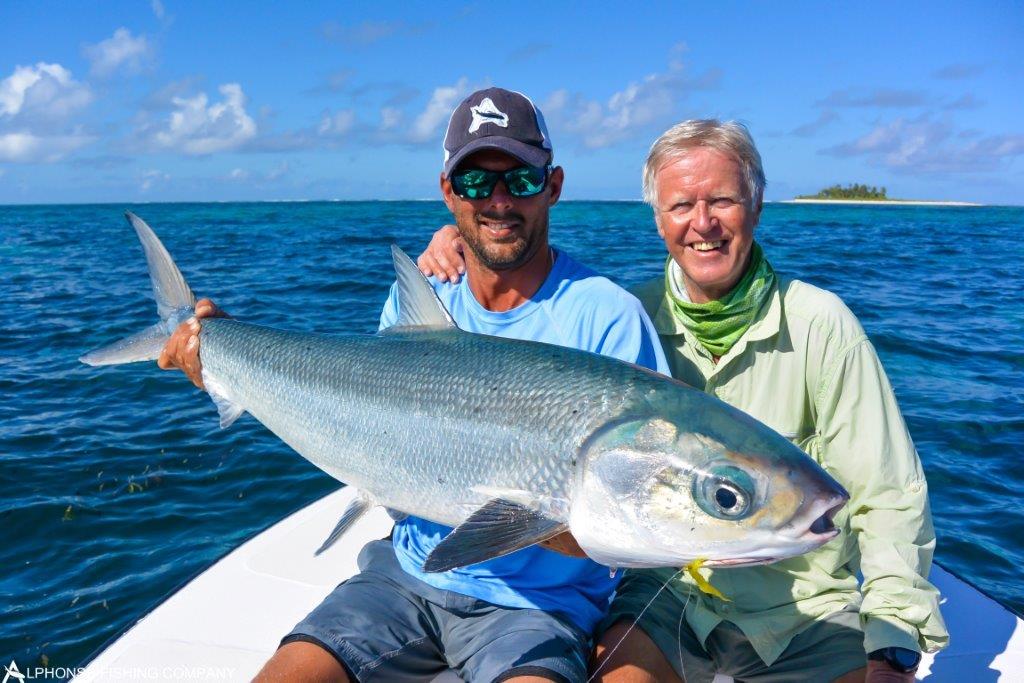 A special mention goes out to Vladimir Rybalchenko who joined us after a week’s fishing on Cosmoledo. He went out on a half-day milkfish mission on the last day and landed a nice fish inside Alphonse lagoon. 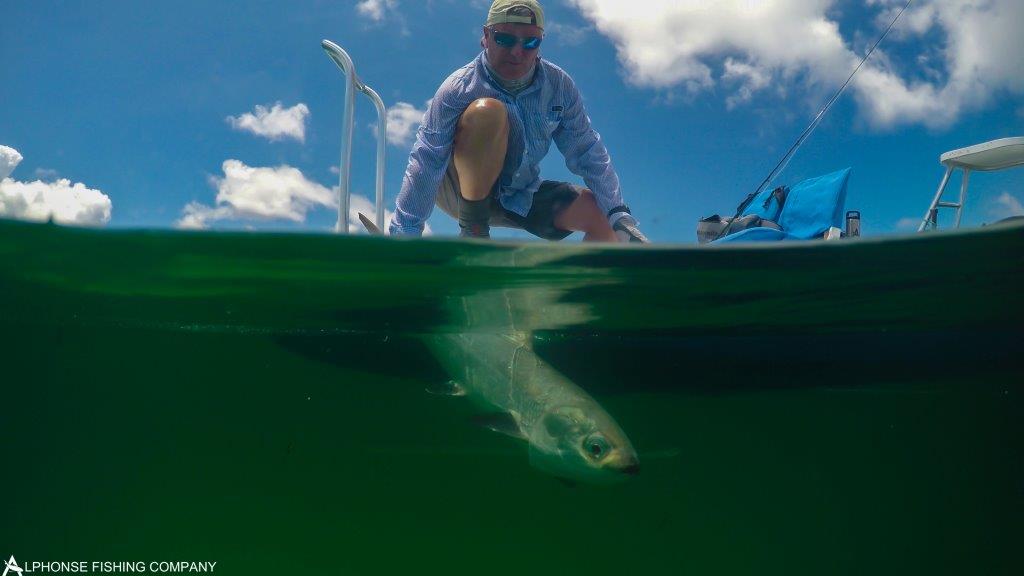 All in all 556 bonefish were landed, 3 milkfish, 3 GT’s and pile other wonderful species. It was a pleasure to welcome back the returning Aardvark McLeod group. It is always a privilege to share amazing moments and experiences with such like-minded fisherman especially when the week provides some unforgettable fishing.

All the best and tight Lines from the Alphonse Fishing Co. team at Alphonse Island. If you would like discuss Alphonse or receive further information, please contact Charlotte Chilcott. 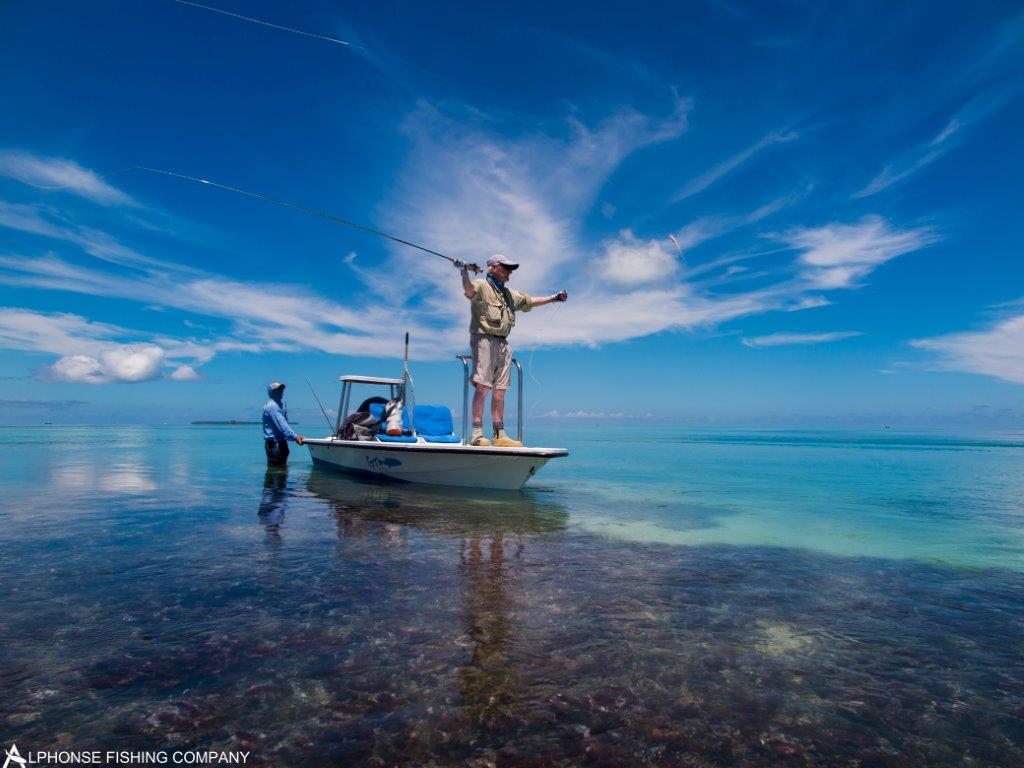