From Tsimane, Bolivia …. The Main and Lower Pluma were very active, which gave us the chance to target feeding frenzies and cruising fish and to sight fish every day– and we had good results with four fish over 25 pounds. 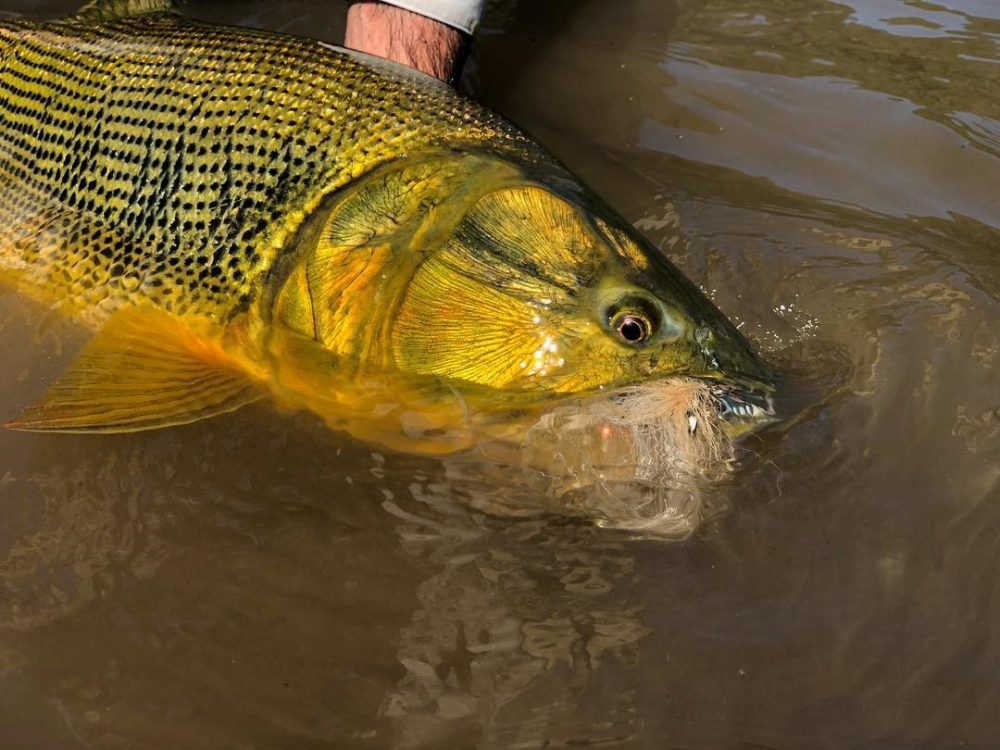 This time the story of the week is from Leonardo Gaggero, who hosted a group of five anglers: Geronimo, Juan Pablo, Eddie, Parker, and Agustín. The week started off with challenging water and weather conditions. A light rain, a couple of cold days, and milky water meant tough fishing for the first half of the week. Despite that, everybody got nice fish. Agustín landed a 15-pound resident dorado on the Maniquicito, where Eddie also hooked and lost an even bigger one. Looking at the scenery, it seamed almost unreal – from the size of the creek to the crystal clear water – and it showed us how difficult the shots at fish can be and the importance of how and when flies are presented. Considering the technical demands, that fish was an absolute trophy. The last three fishing days were full of small and medium sized dorados, but as the river started to drop, casts had to be more technical with a carefull approach, as the key to connect to the “golden ones.” 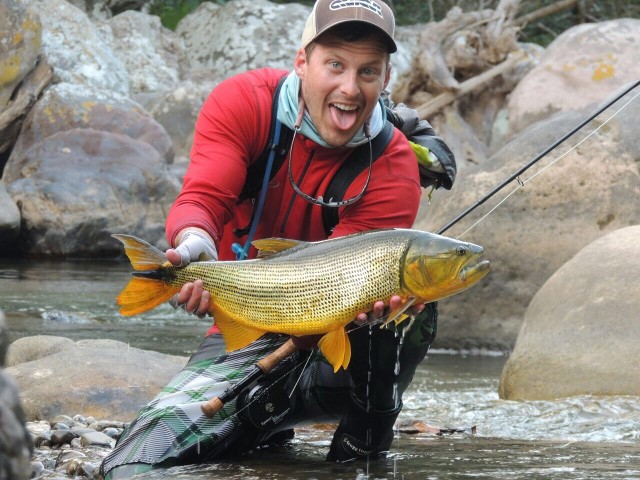 On Saturday we said goodbye to the previous group of guests and welcomed six anglers from the U.S.: Bill and his three sons Brian, Dave, and Lars (all of whom were very excited for the family trip), and afather-son duo, Jack and his non-angler dad Chimu, from Texas. The weather during the week was more than beautiful but still a little cold during the night and the first hours of the day. The Main and Lower Pluma were very active, which gave us the chance to target feeding frenzies and cruising fish and to sight fish every day– and we had good results with four fish over 25 pounds. This perfect weather was what we were waiting for to make the overnight camp, and Bill with his sons went there. Although the fishing was very technical and demanding, for two days we fished water with unparalleled beauty and lived in the jungle in a very intimate way. During the second camp day, Dave had a one-in-a-million opportunity when he spotted and took some pictures of a jaguar (Panthera onca), giving a memorable closing for their trip. We only fished the Lower Secure for one day, and we landed some fish in the 10-pound range. But the conditions are good, so we’re looking forward to giving this stretch more fishing time during the coming weeks. It was another week of great friendship, dorados, and fun. 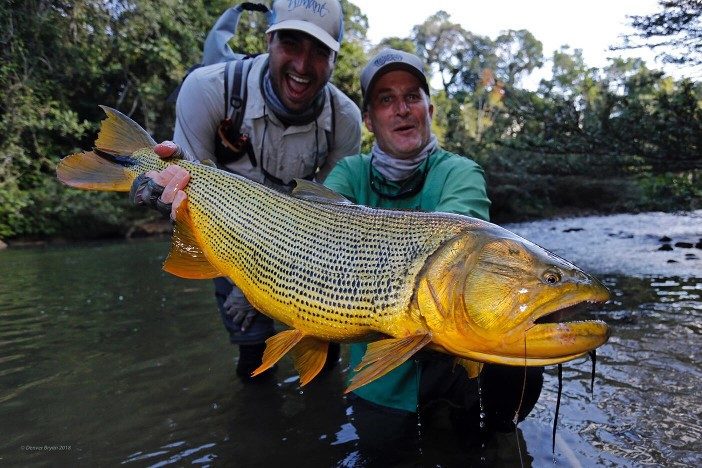 The eleventh week of the season brought four anglers from the U.S. –Denver, Erwin, Robin, and Chuan – along with their host, Peter, areally good angler who’s been guiding in Mongolia for 14 years.The weather was really good for the whole week, and although the waterstarted out a bit colored, it got clearer day by day. At the beginning of the week, three anglers hiked the Agua Negra with our guides Luciano and Miguel, and they got some really good results. The water in the Agua Negra was crystal clear, and they found seven huge feeding frenzies, and hooked some small and medium sized dorados, as well as more than four really big dorados, including a 22-pounder! The rest of the group made a scouting camp on a small but beautiful tributary called Chimoro, where we often fish with light tackle anddry flies. Peter, Chuan, Ezequiel Perillo, and I went up to the small tributary. We normally fish this section for a day or half a day in the search of powerful yatoranas and some medium-sized dorados. This area has some of the most beautiful scenery, and hundreds of yatoranas and dorados made us more than crazy and gave us one of the best fishing days for these fish on dry flies of my life. Due to the color of the Main Secure, we kept fishing the tributaries and the Agua Negra. We had really good chances to get some monsters everyday, but fishing in crystal clear waters is very challenging due to the amazing speed of the dorados and how difficult it can be to makea six-meter cast between monsters destroying sabalos. We finished another great week and learned more every day about thisamazing place.

The best flies of the week were:
Black and red and yellow big seize Chernobyl, for the tributaries
Black and red Andino deceiver, for the Agua Negra.

The biggest fish of the week was the previously mentioned 22-pound dorado, which was caught by Erwin in the Lower Agua Negra. 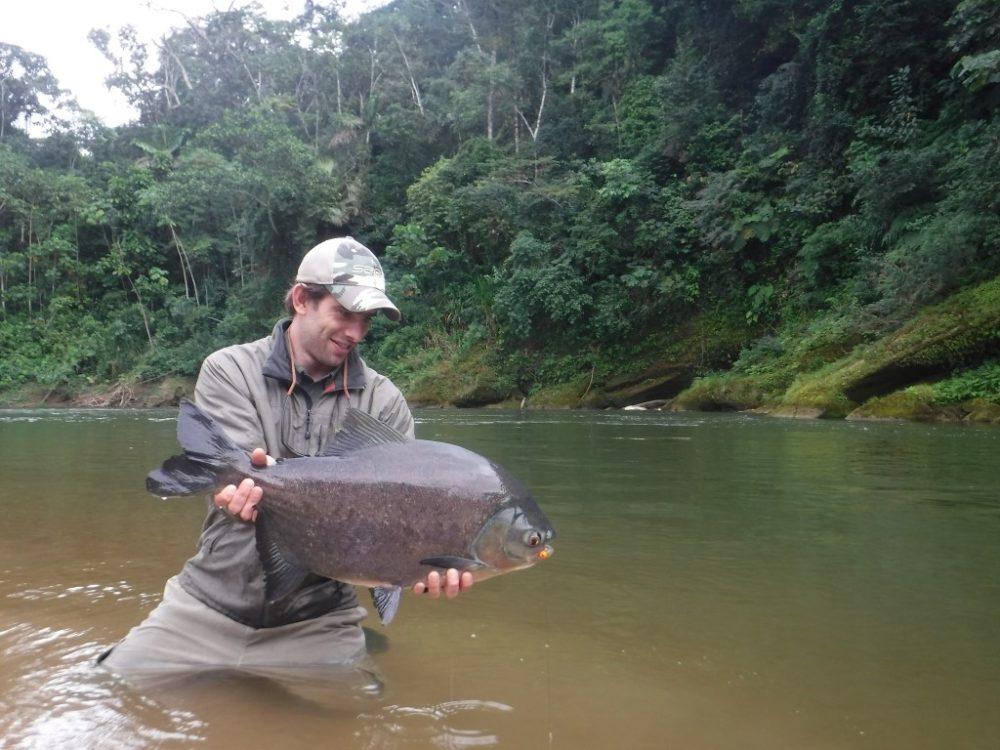