Good people, good weather, and great anglers made for an amazing week here in Bolivia. From the beginning, we’ve believed that the experience of just being here is an adventure — it’s a mix of feelings and moments, as strong as the fishing itself. This is our philosophy, and once again we closed another awesome week in the Upper Sécure. 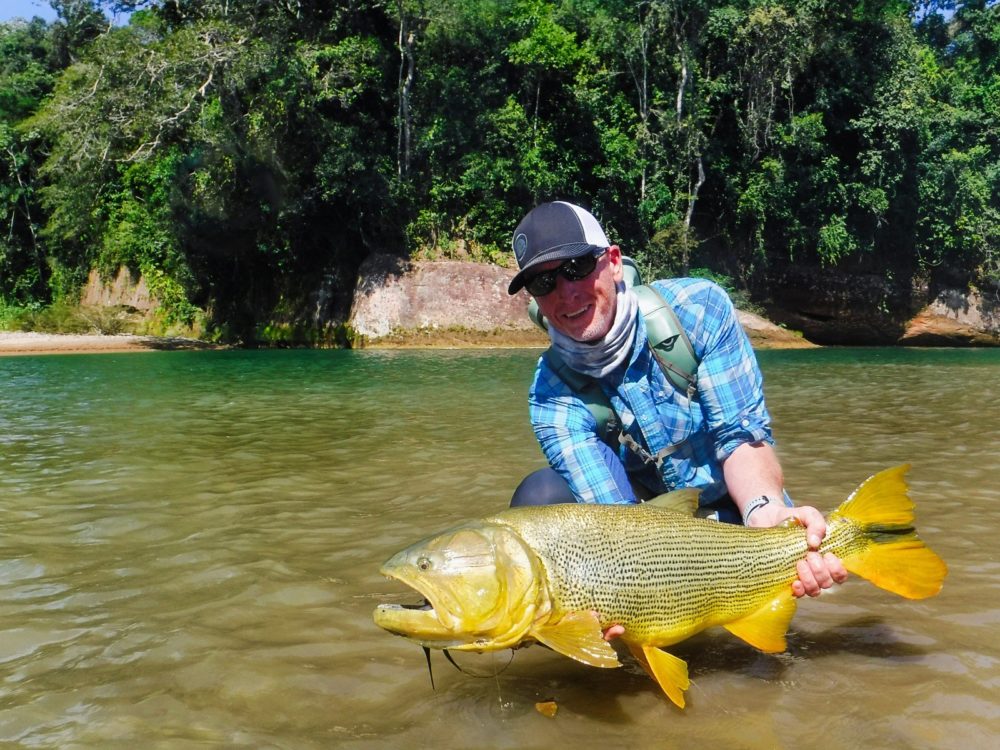 From the beginning, we’ve believed that the experience of just being here is an adventure — it’s a mix of feelings and moments, as strong as the fishing it self. This is our philosophy, and once again we closed another awesome week in the Upper Sécure.Brandon, Corland, Paul, and Robert, four friends from Salt Lake City, made a four-day headwater camp, and Parker, from Seattle, had the rest of the river to himself. Everyone experienced great fishing. There were numerous chances for dorados and pacus and landing all sizes of fish, including 20- to 22-pound “yellows,” which were the biggest ones of the week. Along with the perfect scenery, the nice weather allowed for consistent success on the river all the week. If we had to summarize this week in just a sentence, it would be a quote from Rob minutes before leaving Asunta: “I would return to this place a million times, even without a fly rod.” 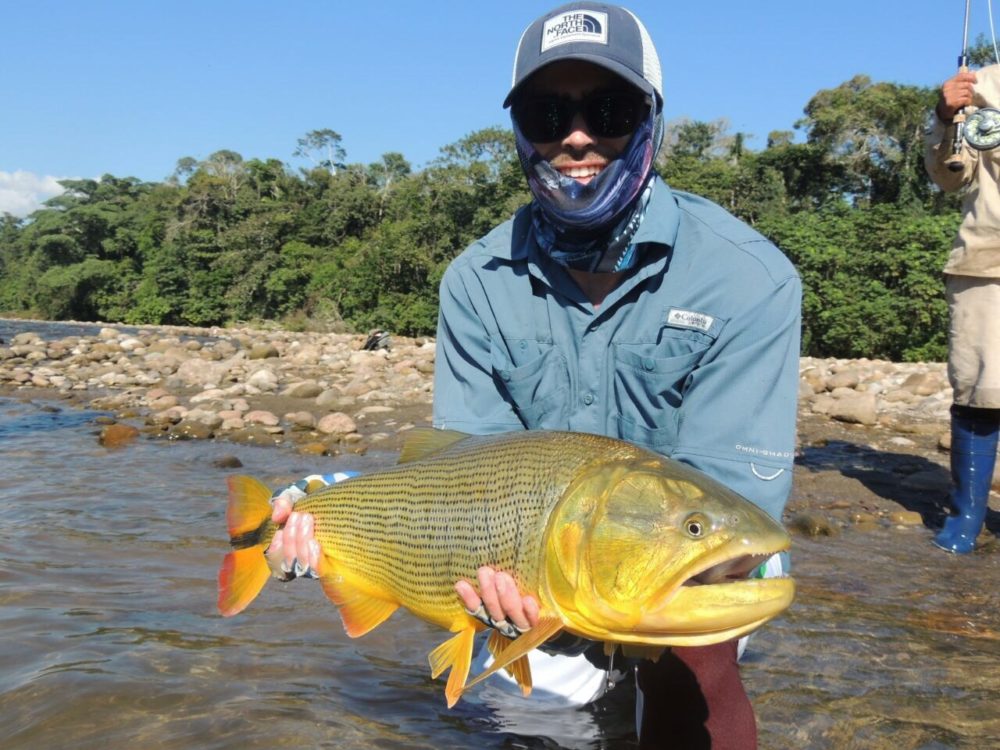 This week we welcomed back a group of mostly repeat guests. Michael, Hugh, Patrick, and Luke, all from England, returned after a successful 2015 trip to experience another six days of fun. From the U.S., we were excited to see Tim again, but we were also stoked for first-timers Bruce and his son Kevin to join us. Like the previous week, the weather was cold, especially during the first hours of the morning. But on the Lower Secure, we lost count of how many fish in the 4-pound range were landed, and on the second day, Bruce hooked a fish of a lifetime — a 22-pound dorado that was ultimately landed and released. Two more fish over 20 pounds won the battle that day, along with fish in the 18-pound range too. On the main Pluma, the cold water made the things a little more difficult. However, Kevin exhibited masterful casting that led to an incredible 22-pound fish on the fourth day. We landed some fish in the 12-pound range as well. Itirizama was the toughest, and the cold water didn’t help. But being stealthy with longer leaders and smaller flies was the call, and we landed some 8-pounders. 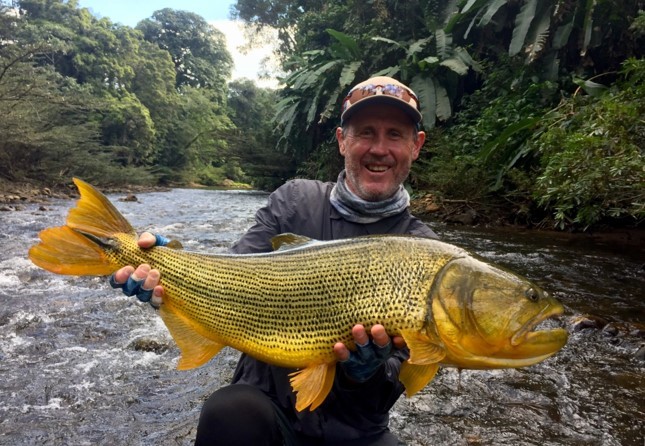 This week we sharedwonderful moments with Andrew, Robert, James, and Glen, all of whom hail from different parts of the world but follow the same passion.The water temperatures and the weather were really good during theen tire week which enabled us to put together the best schedule. James and Andrew were the first group to hike to the Agua Negra and get really good results, and the famous feeding frenzies occurred at least eight times! Big dorado chasing sabalo, gave us a good show, and this event is one of the things that makes us love this amazing jungle. James and Andrew spent one night in our out camp and caught some really big dorado as well as some good-sized yatoranas —another species that’s fun to catch on poppers or dry flies.While James and Andrew were up on the Agua Negra, the fishing on the main Secure River was really good for Robert and Glen. The water got clearer each day, and the fish began moving and hunting between the logs and fast waters. Many small and medium dorado provided for a lot of fun.The conditions onthe river were really good the entire week and gave us more than five fish over 17 pounds, along with many medium and small-sized fish. Robert and Glen walked up to the Agua Negra on the last two days and caught the biggest fish of the week — a beautiful 27-pound dorado in crystal clear waters. 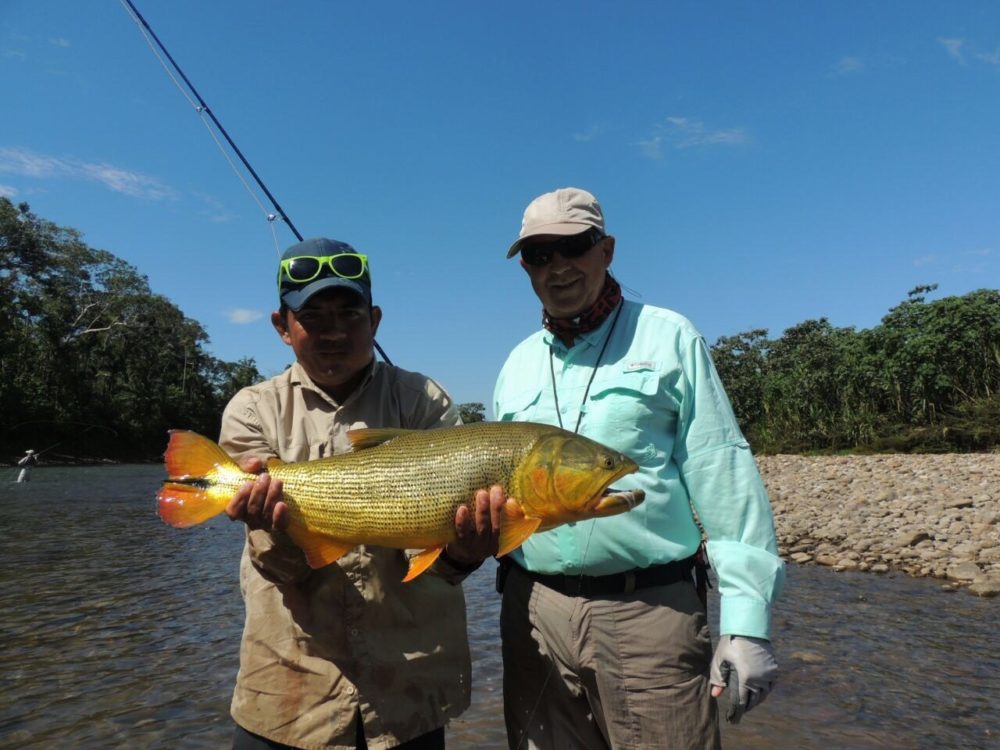