Another week goes by in Tsimane, fishing from Secure, Pluma and Agua Negra lodges.  Seems like the fishing was very good in the tributaries and on the main Secure all week. Read on for an update. 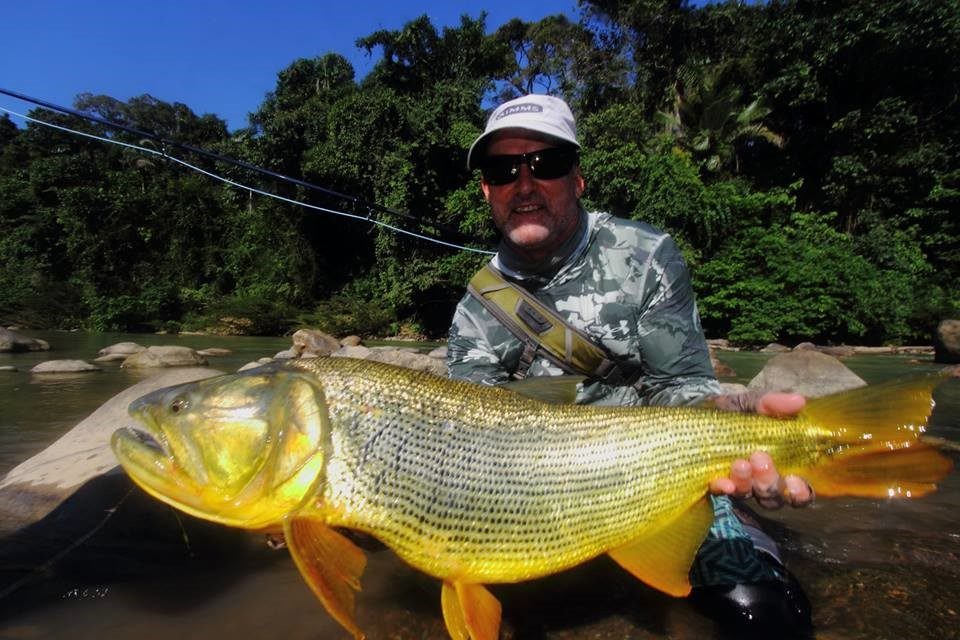 This week at Secure Lodge, we welcomed three anglers from three generations – Steve, Kent, and Harrison – from Idaho. They got the chance to enjoy a river full of fish as a big run had arrived. We also welcomed good water and weather conditions, making for an amazing week of fishing. Dorado were hunting constantly and were eager to follow and take flies, and we also encountered catfish and pacu travelling together in the same runs. It was a wild jungle event! Some huge fish put anglers to the test and ended up getting away, leaving us with broken leaders, wires, and knots. These three anglers camped one night above “El Mirador” — an iconic pool on the Upper Secure. Grandfather, father, and son all shared an unforgettable experience, and by the end of the week, their goal was accomplished – to live, at least for a little while, in this unique place, with these unique people, in this unique golden river. 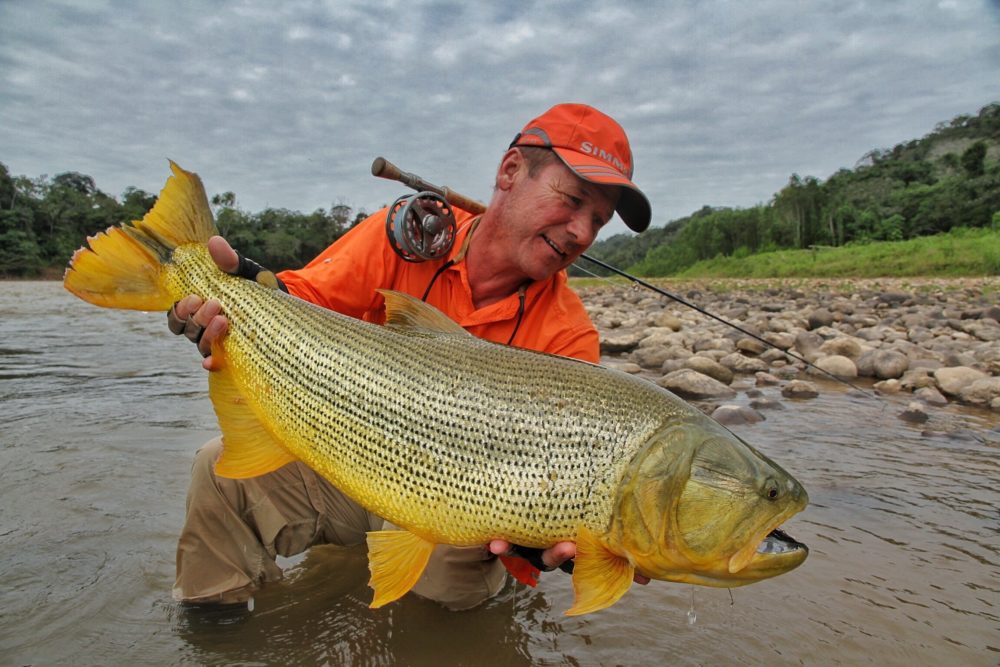 After two days of monumental rain, we welcomed our seventh group of guests on Monday. The water was still high, but we managed to fish for half of a day with Eric and Jason (brothers from Montana), and Pat, Bob, Dave, and Joe, who were also from the U.S. All of them were new to dorado fishing but avid anglers. We were also joined by Peter and Pedro from Austria, who completed our group of eight. They arrived at Pluma Lodge after spending six days at Secure Lodge. After the first half-day, we had unbelievable fishing the next four days, as the high water helped relocate all the baitfish that arrived the previous week. The Main Pluma gave us a show that was worth seeing, with feeding frenzies and dorado pushing bait almost everywhere we looked. In four days, we connected with more than 25 fish over 20 pounds, and we landed more than 80 percent, thanks to our anglers’ skills. The Lower Pluma and Lower Secure also fished well with more than 15 fish over 20 pounds landed during the week. Day two was tough on our hearts, and especially on Peter’s, after losing two 30-pounders in a row. Bob landed one of the 30-pounders of the week on the very last day, just before Eric lost his 30-pounder a couple meters away. The upper sections, such as the Itirizama River, were clear for the first two days but more mountain rain changed that. During the second day of fishing, Pat landed a 30-pounder – the third one for him and the first one of the week on that river. With a little higher water, we got to see all kinds of feeding frenzies again, with Eric and Jason hooking several 10-pounders and losing one much bigger while fishing the surface. It’s been another week of friendship, laughs, and good fishing. Even though the weather didn’t help us in the beginning, we ended up seeing the river full of life and lots of angry dorado! 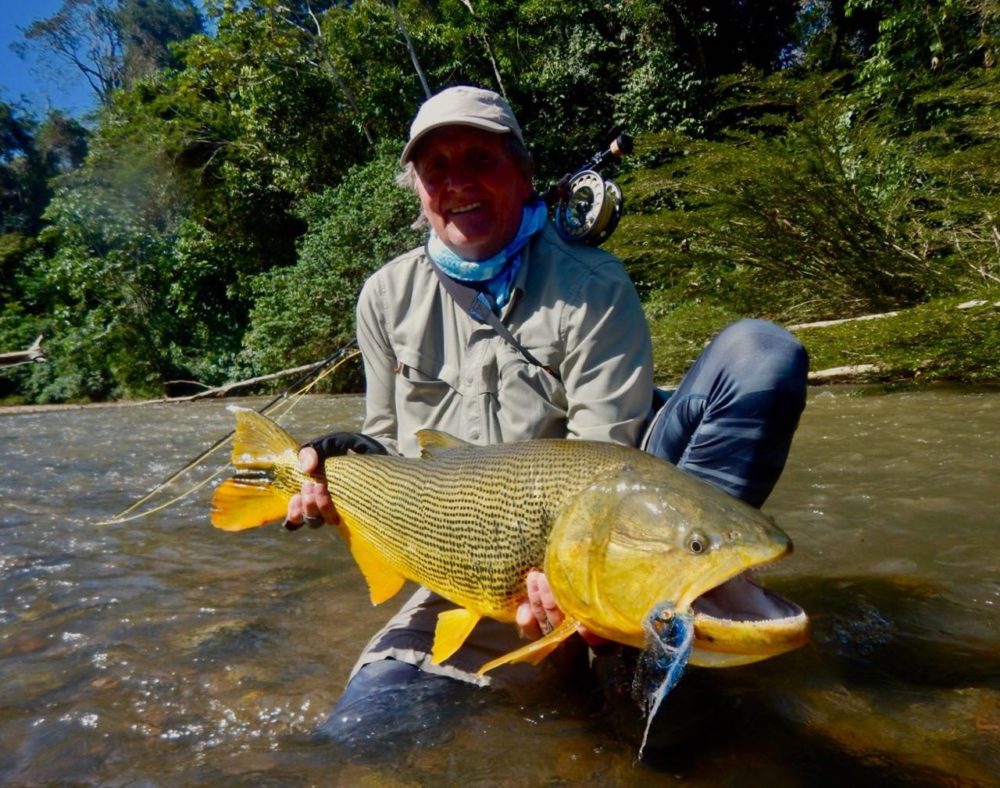 The ninth week of the season was super exiting, even though Gus, Jason, John, and Phil got off to a late start. All flights were delayed one day because of the weather. But after the delay, the weather for the rest of the week was really good, with temperatures around 24°C and a bit colder at night. The Agua Negra was a little bit off color on the first day, but we were able to catch some medium-sized dorados, and Jason got a nice 19-pound dorado. Phil, a 25-year-old angler, enjoyed this trip – as it was his first time using a fly rod. It only took a few hours of casting lessons before he started casting very well. The second day he caught a good number of small- and medium-sized dorados, which is perfect for someone learning the technical aspects and the beauty of fly fishing. The fishing was very good in the tributaries and on the Main Secure all week. There was a lot of action, and we caught a good number of fish between 8 and 17 pounds. The last day of the week, John and Phil hiked the Agua Negra, and they had an amazing day. They found many feeding frenzies, and Phil hooked a huge dorado that took the fly two meters away from us. Phil also caught his first dorado while sight fishing — a 10-pounder after a really nice cast in the middle of a shallow run. 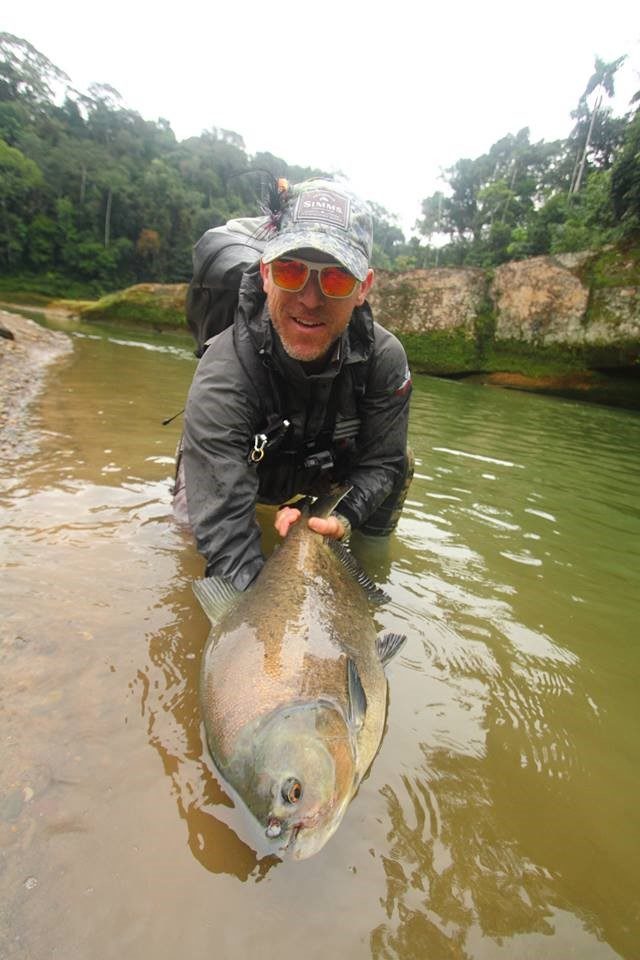