This morning as the mist lifted of the banks of the river we were greeted by clear blue sky. The Patersons left early with Dustin to the Kasicks as it should be perfect today, Richard and Patricia Sankey along with Godfrey Butler and Sebastian Hope ran the Kalum as this was also dropping nicely into shape, and Alistair and I were to fish on the main Skeena at the mouth of the Kalum. This is a long gravel bank that I affectionately refer to a five hour bank… because it takes about five hours to fish it down once! 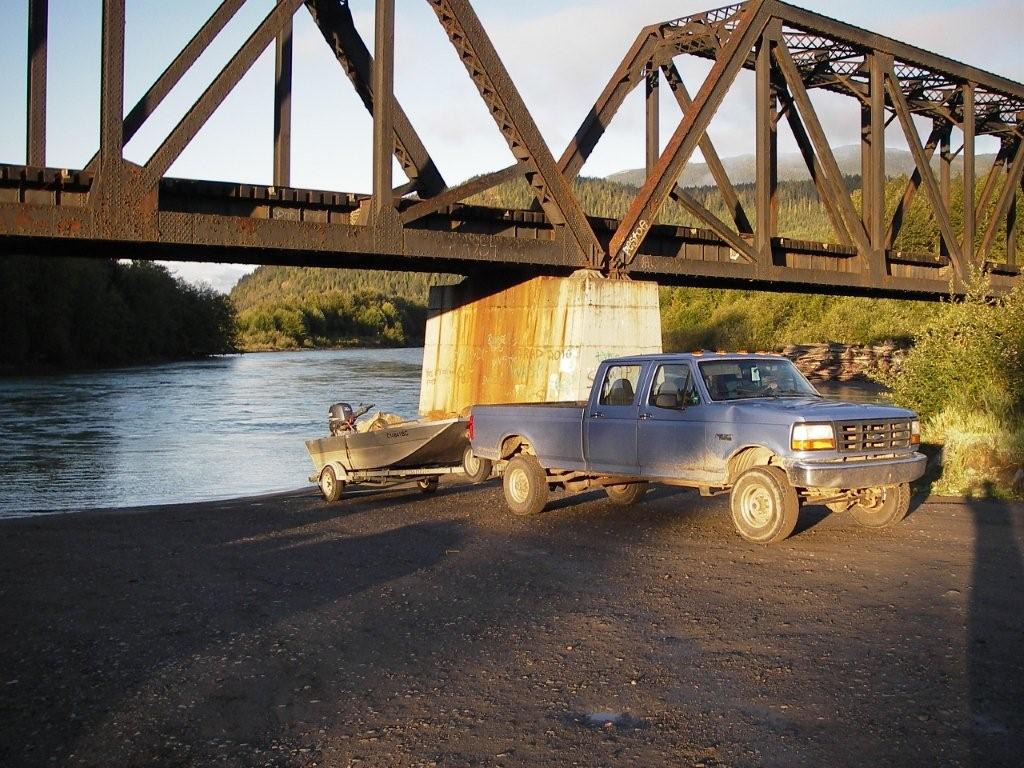 The sun was clearing the trees as we arrived at the top of the bank and our guide Jeff Langley set us up. Big two handed rods were the order of the day, and we both jumped in and started casting. Second cast Alistair connects with a hot steelhead that starts thrashing on the surface before heading for a large tangle of tree roots. Alistair desperately tried to keep it away but it was having none of it and smashed him in the roots. He gave a howl of rage and disappointment, and then sat on a log in disgust. I really felt for him. The fish had hit a small orange popsickle on a fast sink tip. 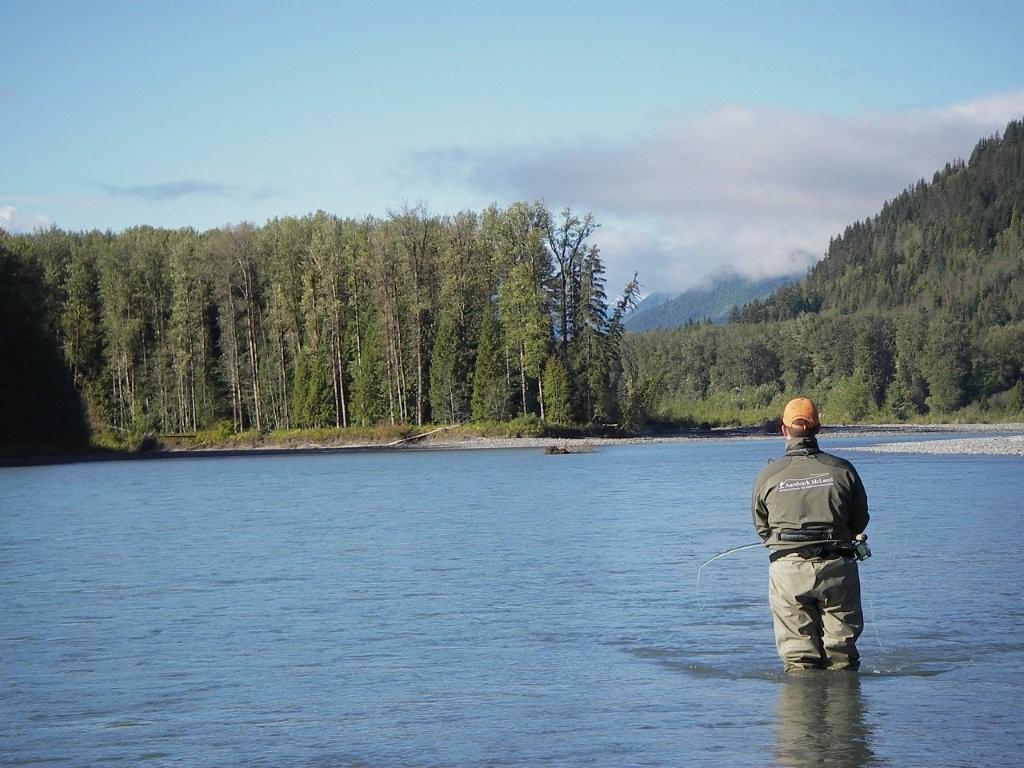 The main Skeena itself was still flowing quite brown, but the water coming out of the Kalum created a vain between the two currents, and was considerably cleaner. Just at the edge where the two currents met every so often and enormous Chinook would roll, giving us a good view of their red spotted backs and tails in full spawning plumage. We thought we would be in the money after such a flying stat, but the sun moved high in the sky and beat down on us, so it was really two bright. We fished it down several times with varying methods, but apart from a couple of touches we failed to connect. I even tried the striped Sunray Shadow hoping for a huge aggressive take… but nothing. 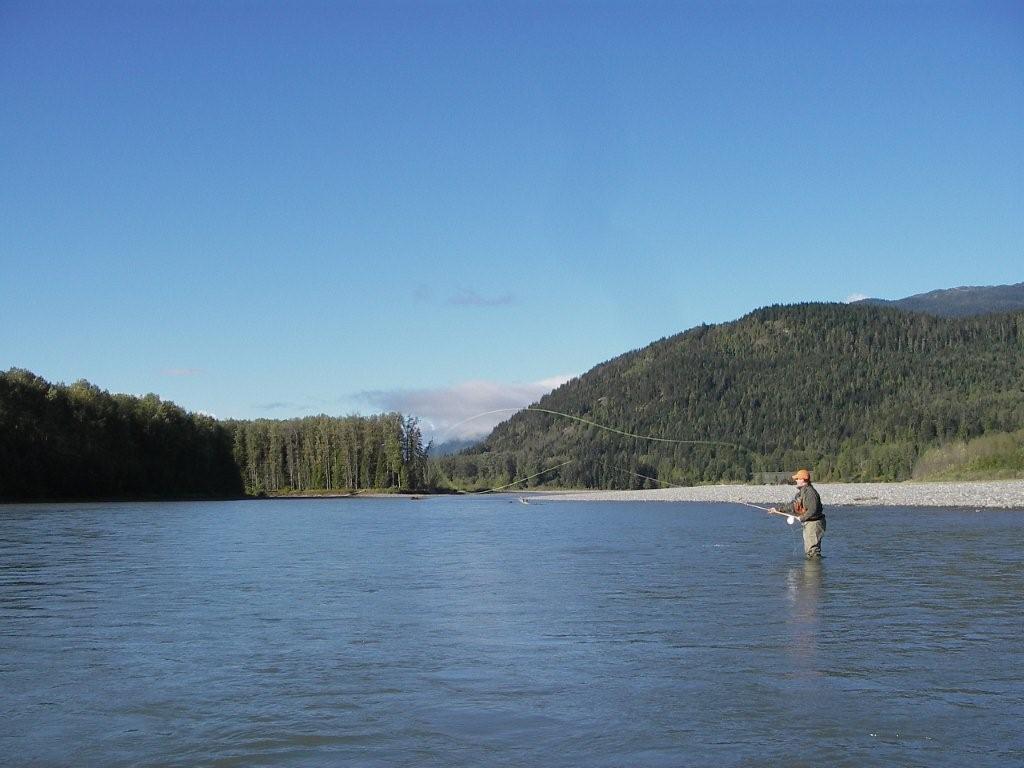 I did however get some good double handed casting practice with my Hardy Angel 2 14’ 9# which I have grown to really love. Matched with a Rio Powerspey it is a very good weapon. I also tried out the new Loop Opti shooting head system that Alistair was fishing with which I thought was very good. Although the head is not as long as my older Guideline DCC connect system it was very easy to fish heavy heads off, and with a little underhand pull will go a satisfyingly long way. 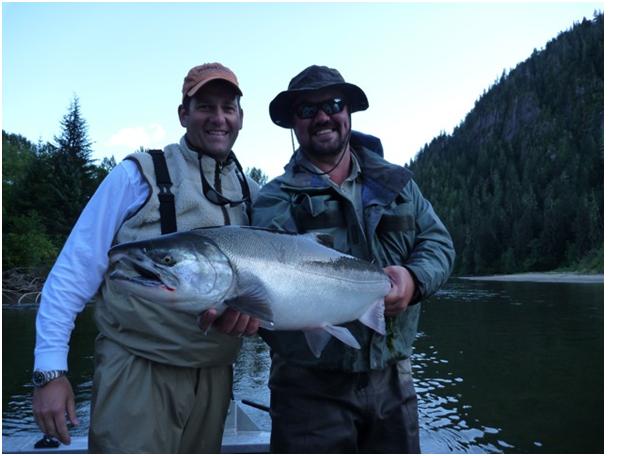 Jeff boated us back to the boat ramp with our tail between our legs. On arriving back at the lodge it transpired the Sebastian had caught a beautiful chrome steelhead of 12 lbs, and also an 8lbs steelhead from the lower Kalum. These were his first steelhead on the fly and I believe from the excitement they had given him a real battle cart wheeling across the river. Godfrey and Richard had connected with some nice Coho, and the Patersons had caught some very large Coho on the Kasicks up to 18lbs. That is a very large Coho! Every day the conditions are improving and we are hopeful the Copper River will come into shape tomorrow. Alf produced one of the best lasagnes I have ever head for dinner, along with a homemade pecan pie, and all was well with the world.