Catching the bus….. but only just

Home | Fish Tails Blog | Catching the bus….. but only just

Roger Young has fished Alphonse Island in the Seychelles a number of times, but he recently had an extraordinary experience there:

The giant trevally (GT) grows to be by far the biggest of the several species of trevally that swim in the waters of the Indian Ocean. For some, its scientific name (caranx ignobilis) is a bit of a mouthful and catching a big one has been corrupted to ‘catching the bus’.

Location: St Francois Lagoon, near Alphonse Island in the Amirantes group of islands in the Seychelles, Indian Ocean. End of October. 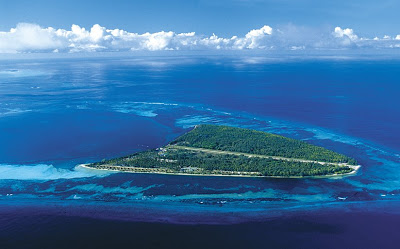 We knew the tides would not be ideal for bonefish that day, although we’d had an enjoyable couple of hours wading across the coral sand flats casting at both singles and groups of 3-4 lb bonefish running off on the falling tide. Earlier, the fish had been eager to take the lightly dressed size 4 Christmas Island specials we were using but as the tide fell further the last few fish were running fast to make the safety of the lagoon and were in no mood to feed. Now it was late morning, sight casting for bonefish was finished, the tide was out, the flats dry, there was no wind and the near equatorial sun was blazing down. With almost nothing to see but lagoon and sky your whole world is coloured different shades of blue. A stunningly beautiful place but it can be a bit bleak for fishing until the tide starts to make again and the bones come back onto the flats. 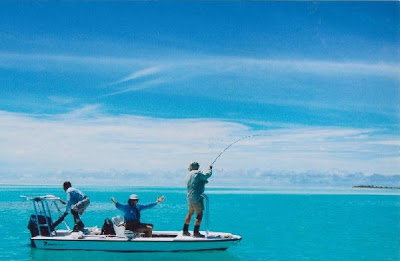 Donald, our guide, was undeterred and suggested we go cruising along some of the many coral edges looking for GT’s. We agreed and were soon motoring steadily across part of the huge St Francois lagoon. About 100 yards from a long coral finger the revs were cut for a silent approach and we slid quietly towards the edge.

Suddenly Donald hissed at me ‘you, up front, get ready, quick’. I hadn’t seen anything but jumped on to the front of the skiff, unhooked the fly and started stripping line off the reel, a few moments later seeing what Donald had seen 20 yards earlier, a dark male GT of maybe 40lbs swimming steadily a few feet down and a few feet from the coral. ‘Cast, cast’ there was no mistaking the urgency on Donald’s voice (even experienced guides get excited at the sight of a good GT). I cast, but very badly, as the fly landed too short and behind the fish. There was not enough line out to load the 11 wt rod. ‘Cast again, longer, quick, quick’. Some of you may identify with the fumbling semi-panic that hits you when your guide is urging you on, you are trying to rip more line off the reel, keeping your balance on the front of the boat, trying not to stand on the coils of line round your feet, watching the fish swim further away , ………… 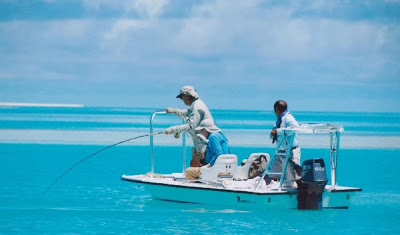 Anyway, I yanked off a few more yards of line, lifted off, one false cast and plopped the fly back hard about 10 feet from the fish. Two strips of a couple of feet, the GT saw the fly, half-turned and swam towards it. Yes, yes, yes, my very first GT was going to take. Two more short strips, it was 2 or 3 seconds from the fly but it did not take …… because a big silver fish we hadn’t seen rose from the depths, engulfed the fly, turned down and disappeared. 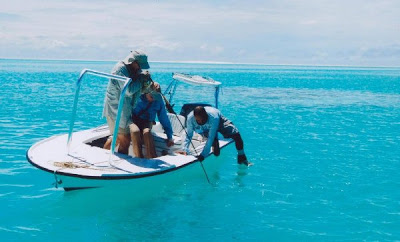 It happened so fast. No more than 5 or 6 seconds from the time of the fly landing to the previously unseen fish disappearing. I lifted the rod (a mistake) and struck. You are told that it’s much better to strip-strike big fish to set the hook, but by then the line was being ripped off the reel so all I could do was to handbrake the spool a bit, hit the fish a couple more times and then tighten the drag. I hadn’t really seen how big this fish was but as I screwed the drag down more and more it seemed make little difference. I believe it was Oscar Wilde who coined the shortest story about catching big fish at about six words ….’ It pulled, but I pulled harder’. This fish however was pulling so much harder than anything I had ever caught before on a fly rod. The first run of a big salmon, the lunges of a double figure sea-trout, the violent run of a good bonefish, these are all memorable, but this was like being connected to a tractor. And sure enough, with backing being pulled off relentlessly against a very heavy drag setting, the bow swung towards the fish and gradually it started to tow us. 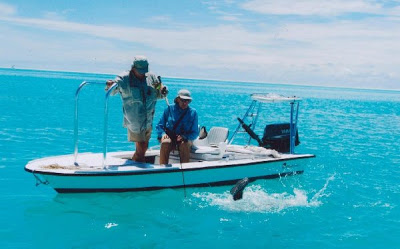 Fortunately when I struck into the fish and the rod tip slammed over, the anglers on a nearby skiff saw what was happening and started to take photos. After a couple of minutes with a lot of backing out and more still pouring off the reel, I admitted that this fish was just unstoppable, so Donald started the motor and began a slow follow. A few minutes later, the backing suddenly angled down more steeply into the water – disaster – we were snagged round a coral head many feet down. I was told later that being cut off on coral snags is how a lot of big GT’s are lost. I tried holding the rod vertically downwards and moving it round the snag – no good we were still stuck. Backing was still being pulled off the reel and rubbing round the coral and I was waiting for the sickening feeling of being cut-off when the motor stopped and Donald jumped overboard, fully clothed, boots and all. Within a few seconds he had dived down and freed the line, which jerked straight, again. He surfaced, swam back to the boat, Crawford hauled him aboard, the motor was started and we resumed the slow pursuit. 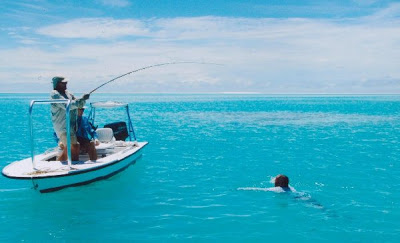 After that amazing escape I remember thinking how lucky it was that earlier that morning as we were loading the skiffs, Etienne had spotted that the spool on the reel was loose in its cage. Had I not tightened it then it would undoubtedly have dropped out under pressure. Ten minutes or so later into the fight, more drama, as we were snagged again but this time the backing was around a much deeper coral head. Surely this was going to be the end. As I turned in mute plea to Donald he cut the motor and went overboard for the second time, diving down out of sight and several long seconds later resurfacing without success or so I thought. Actually he had freed the backing from the deep coral but now it had wrapped round the pliers on his belt. Crawford reached out to grab him, helped him untangle himself and hauled him aboard again, making the skiff rock suddenly, whereupon I fell backwards. It was chaotic but the line was free and the fish was still on. The brutal press of the GT had not altered and for the next 15 minutes or so Donald skillfully matched the speed of the boat to that of the fish. By pumping and winding, pumping and winding we started to make line back. 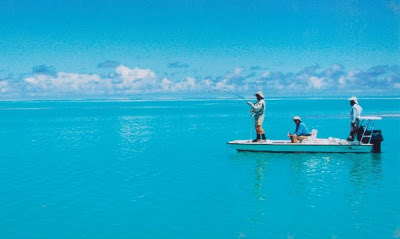 We passed very close to another coral head but luckily the fish swam straight on. With my right arm shaking from the strain we saw the near end of the fly line emerging from the water some 30 minutes after it had disappeared. A few minutes after that and you could just make out the grey outline of the fish still swimming directly away from us. It didn’t actually seem that big but then it’s very easy to underestimate the size of fish in the water. Up to now I had been able to hold the rod at a low angle to play the fish off the reel for maximum pressure and how glad I’d been for the Sage’s second fighting grip above the handle. 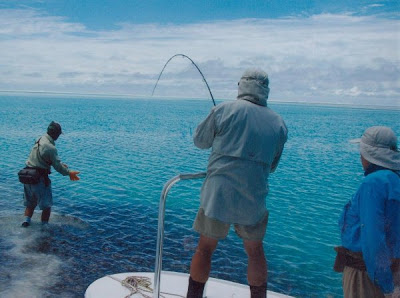 As we got closer to the fish I had to hold the rod up higher to cushion the fish’s heavy lunges and I was very aware that fly rods are not ideally suited to pumping heavy weights up through the water, but the rod coped brilliantly with this abuse. Nearly 40 minutes had elapsed when the fish at last turned sideways-on and after a few more minutes of slugging it out, turned over on its side. Donald had the big landing net ready when the fish suddenly lunged forwards a few more yards taking it right next to another coral edge – for the first time I was really nervous that I was going to lose it right a the end. 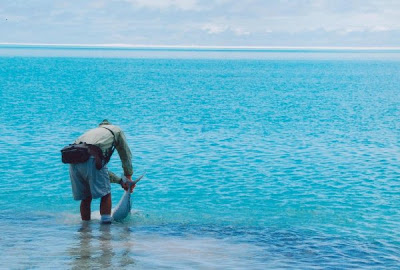 Luckily, Dan, another guide who had been shadowing us (and from whose boat the photos were taken) reacted very quickly, ran his skiff aground, jumped out and ran across the coral pulling on armored gloves. He reached down and at the second attempt grabbed the fish by the tail and beached it. I was aching, shaking and all I could think of to say was ‘waoooooooooooooooow’ 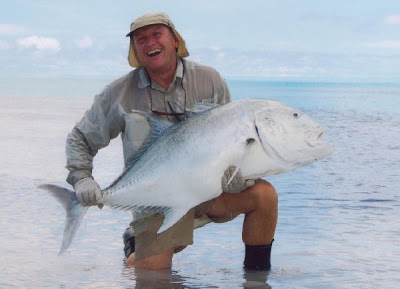 After an alarm ridden 40 minute fight it was a beautiful GT – the fish of a lifetime on a 9ft single-handed fly rod. A magnificent, glistening silver female, 129 centimeters for length estimated at 80 lbs landed about 1.5 km from where it was hooked, with the barbless hook in the corner of its mouth at the end of a heavily frayed leader. After measurement and photos the guides took her back to the coral edge where after a few moments recovery she slid quietly away into the waters of the lagoon. 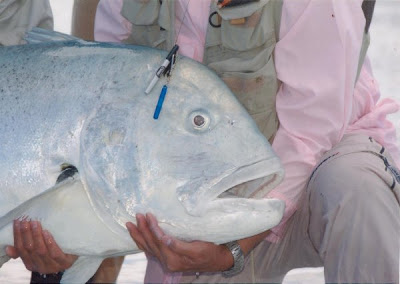 My thanks go to:-

– Etienne Quilindo for his sharp eyes spotting the reel was loose

– Ray Reed for the photographs

– And most particularly Donald Loze. Without his extradordinary guiding and diving skills I would never have caught the fish. It is as much his as mine.