Florian recently returned from a trip to Cayo Largo where he caught his first grand slam and kindly wrote a report of his experience:

It had been a long time on my list. The fabulous Caribbean fishing for tarpon, bonefish and permit. In the summer of 2014 I decided that it was time to start planning. I am not getting younger. You can’t take the dough in the bank with you… and Carpe Diem. So I started to search for the right spot, talked to friends and eventually came across a very competent travel agency in the UK. Aardvark McLeod. Peter is a great and knowledgeable guy and Lutz Schepers who takes care of Germany was also helpful. After a while it became clear that it should be Cuba AND it needed to happen fast. If US flyfishers are going there in force it will change and I am afraid not for the better. There are various options to think about fishing in Cuba. As I was travelling on my own I chose the hotel/lodge option. Fishing from a liveaboard puts you in the middle of things, but you are in close quarters with a group of people and there is a chance that you might not get on.

Two things needed to happen before the travel. A lot of fly tying and getting the right gear. From an Alaska trip I still owned an old 10 weight (Echo 1 with a System 2) which did a good job. I “needed” a heavier outfit, a 11 or 12 weight. This and getting the tying materials needed triggered two significant trips to a tackle dealer and a couple of mail orders. 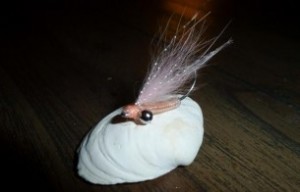 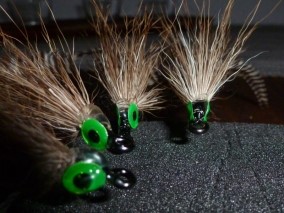 Aardvark McLeod supplied me with a long list of flies to tie and so the whipping up of Cockroaches, Crazy Charlies, Squimps and the likes began. The final gear list was a 7 weight Five Rivers FTXL with a Danielsson W5 six9; The above mentioned 10 weight Echo with the old System 2, and a Hardy Proaxis Sintrix with a Colton reel. A “back up” Orvis 12 weight completed my gear. The two trips to the tackle shop made me really popular there. I had some doubts about casting the heavy rods. The 10 weight was the upper end of what I had done to date. I was very curious how Cuba would be and full of excitement.

Morning 4 o’clock the alarm went, get the things to the car and off to Bremen airport. Surrender the bag with the hope to see it again at Havana airport. Paris-Havana was a 10 hour flight and then immigration, as expected slow and cumbersome. Bag was there, thank god.  Chase for an ATM. If you go to Cuba, please note ATMs are few and far between and they only accept visa cards that are not on the US bank circuit. Cash is an alternative. I found the ground handler and the next information was pick up at the hotel for the domestic Cuban flight at 0400! This made for a short night. At the sparse breakfast – dry rolls and a coffee where the beans had seen the water only for a short time – I met the first guy who was in the same lodge as I. To my surprise an American. On the bus were a few more. A Frenchman with his family and an English farmer with his son.

The flight to Cayo Largo was only 35 minutes. At arrival we had live music. The band and a dancer who tried to find passengers to join her were in it for the tip. With an income between 15 and 40 USD a month that’s understandable. A real breakfast with ham and cheese omelette and a coffee that tasted like coffee. Check in and winding down after the trip. A couple of local beers and a few mojitos helped. At 1700 we were picked up and taken to the lodge with our tackle. The guides set up the rods and there was a very good quality briefing. It covered the fishing and the skiffs, including the safety features. The plan for the coming morning and the following 6 days was to have breakfast and pack our lunches at 0730. Pick up by bus from the resort at 0800 and by and large we were on the water. 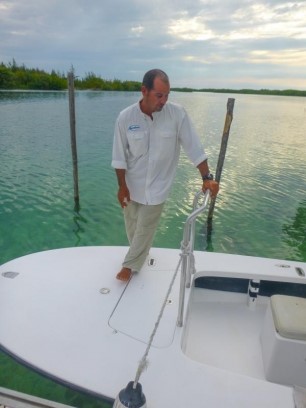 The first day was very untypical. It was relatively cold and the wind was so strong that we had to wear rain gear. This was on the packing list supplied by Aardvark and very useful. The weather restricted the fishing to mangroves and wind sheltered beach stretches. It was definitely different to cast the 11 weight and the 10 weight. Instructions from the guide came in “times”, the front of the boat being 12 o’clock. If casts to 1 o’clock or later were needed they called for backhand casting. I had the first fish taking my fly, but fresh water habits prevented me from hooking. It is strip strike and strip strike only.

The next day we had the most un-Caribbean weather imaginable. It was raining, cold and windy. On top of that there was the occasional thunderstorm. Mauro suggested at breakfast that even though the guides would take us out he suggested to swap this fishing day for the last day of the week. We could have the evening flight off the island and would perhaps loose a half hour of fishing time or so. All but one of us opted that way. A brave Englishmen ventured out, got one tarpon and had a couple of breaks in his fishing. Besides the fly rods the poles the guides are using are also from carbon fibre. 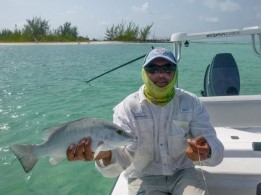 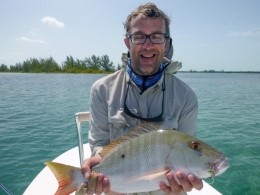 The weather improved overnight, so we got back into our groove. Breakfast, lunch box packing, bus and off we went.  The first day was like a brochure. My guide took me to a bonefish spot first. I hooked a fish and immediately afterwards it ended up as breakfast for a lemon shark. They were almost always around and negotiating the fish around them was something that I eventually got quite skilled in. This round ended with two for the sharks and five for me. We then went looking for permit. On these flats they are riding stingrays. The ray stirs up sand and food and the permit gobbles it up. Well that’s the theory. Almost immediately the guide spotted a ray with a Permit on its back. 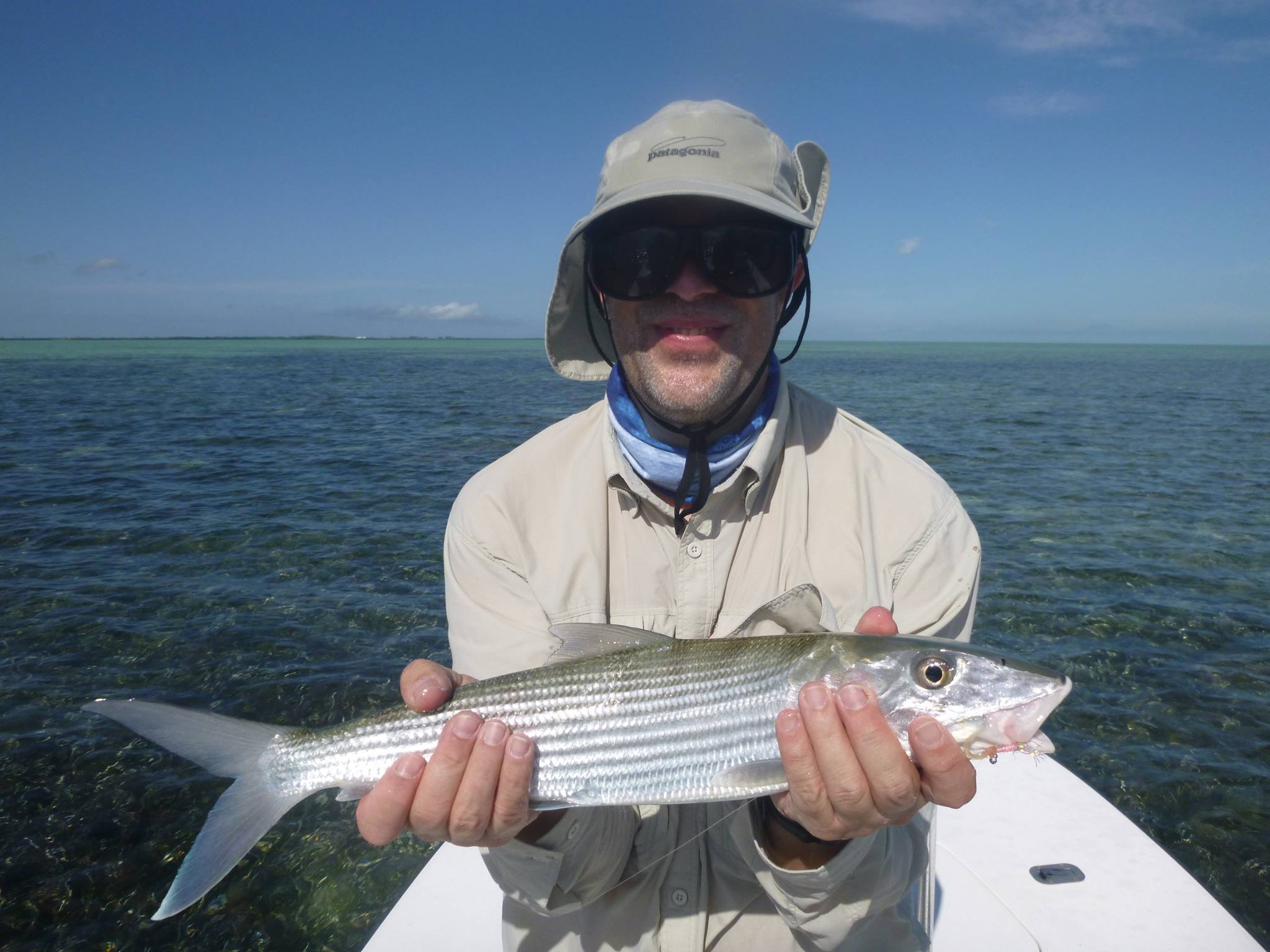 Unreal first shot for this elusive flats inhabitant and the fish is on, f… a knot in the fly line on deck. “let it go go through the guides, we sort it later” so the fish took 60, 70 meter line. Message from the poling platform “Play it softly. Not too much pressure”. After a good 10 minutes the knot is back in sight. Everardo climbs down from the platform and undoes it. Fantastic job! We eventually land the fish. I let out a loud yell and develop the broadest smile possible. 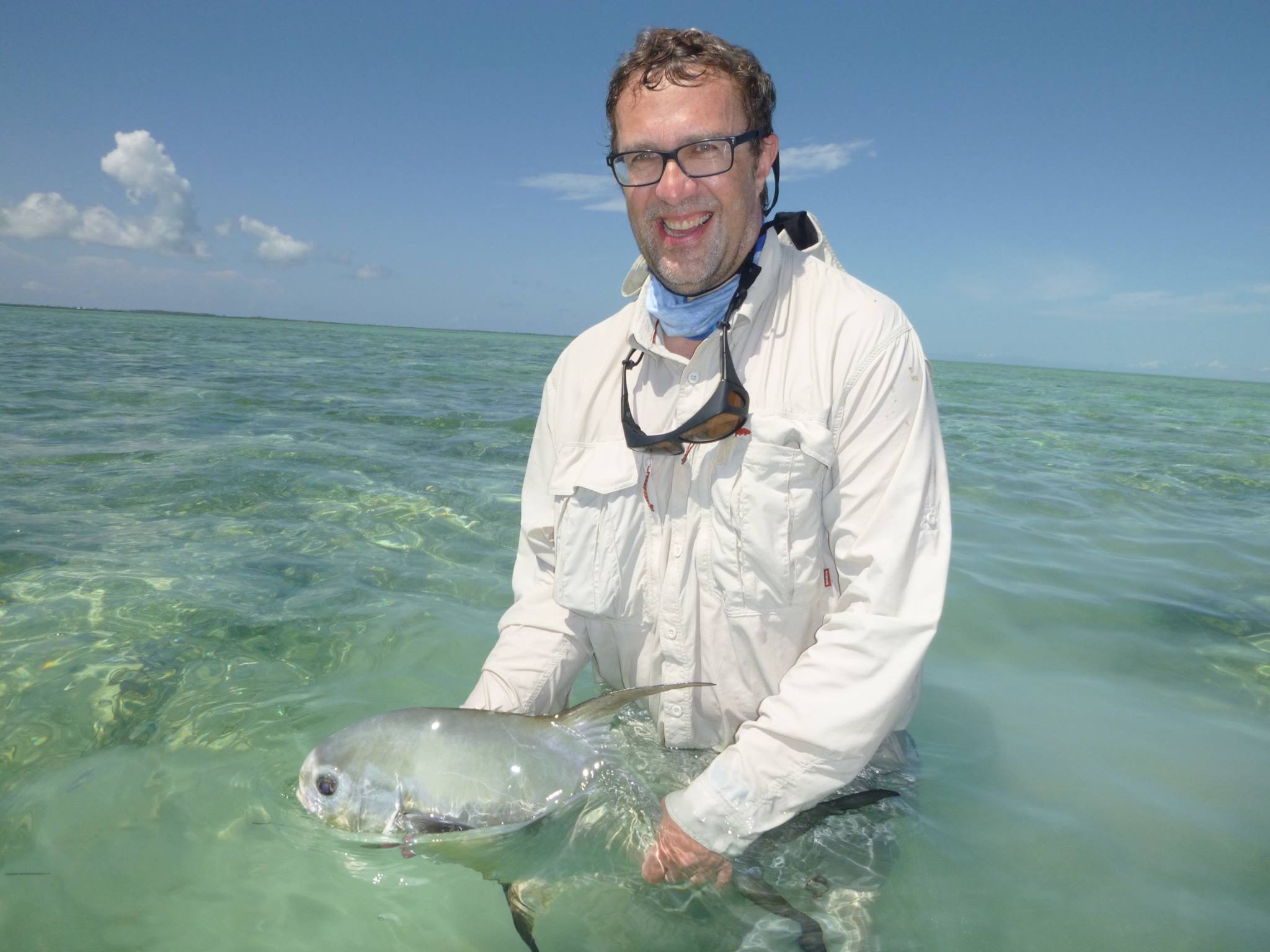 Shall we go for the mangroves for a tarpon? What a question! The smell of a Grand Slam was in the air, more than I expected from my first flats fishing trip. The skiff stops in a lagoon. Up comes the 11 weight with a cockroach and… baby tarpon. What a feeling! The Grand Slam was complete before lunch. 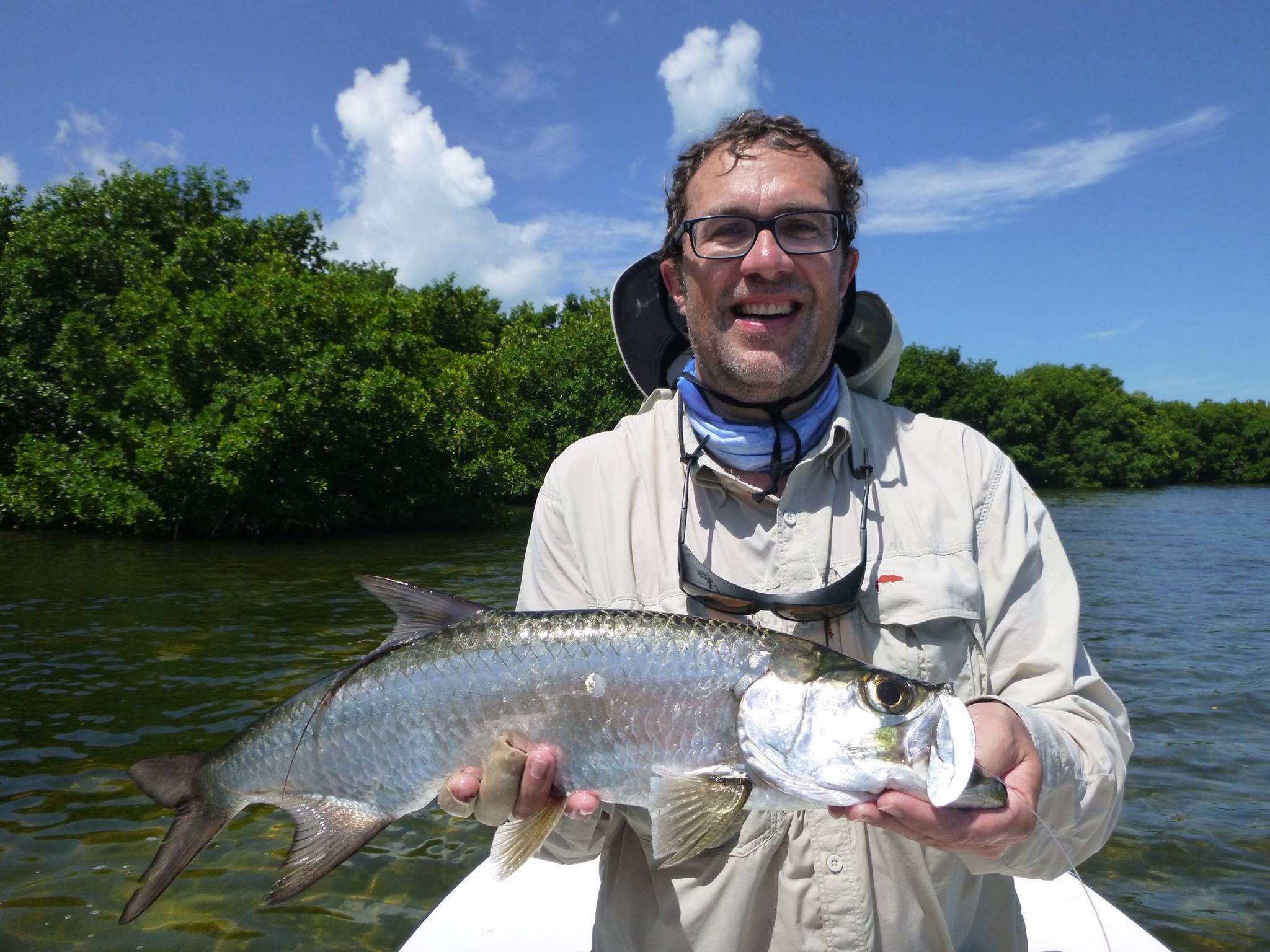 Lunch was on a palm seamed beach. When the boats approached, we had our lunches with one or two of the other boats. Iguanas came and wanted their share of our lunch. These lunches were laid back and very enjoyable. With the Grand Slam already under our belt we ventured into another lagoon that was lined by mangroves. Casting close to the mangroves was the name of the game here. Precision with an 11 weight is something that was unusual but after a while it worked OK. I missed two tarpon takes, but finally the desired snook took the fly and the Super Grand Slam was complete. 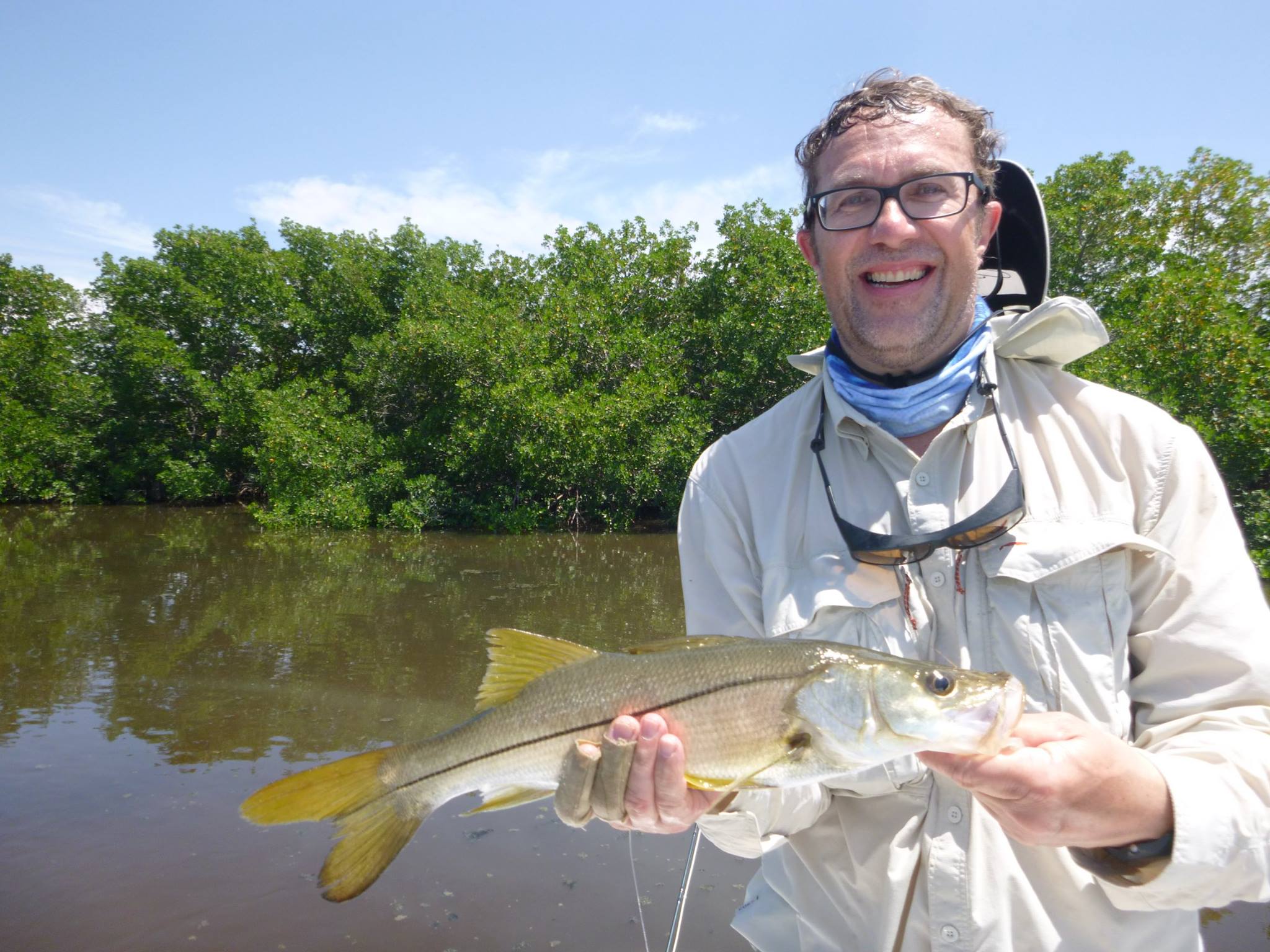 The rest of the afternoon we toyed around in the mangroves. I caught one more bonefish sight fishing in shallow water. Returning to the dock I slowly realized the achievement. The other guides and my fellow fishermen congratulated me. Mauro asked to take a couple of pictures from my camera to put it on the web page. He also keeps track of the permit caught on the Avalon Fly. My permit was the only one during that week.

I fished altogether for six days. I caught a lot of bonefish, but fewer and smaller tarpons than intended. I needed to get into the fishing with the heavy rods and spoiled a couple of fish by lifting the rod tip instead of strip striking. I also think the changing weather didn’t help the fishing. There was the above mentioned permit, two snook, a couple of snappers – a red one that would have made a perfect dinner for six. Cubera snapper, jack crevalle and a remora. The guide and I worked together well. It was already said in the initial briefing: whatever you achieve on a fishing trip like this, is teamwork between the guide and the angler. The lodge is well organized and managed. I got almost everything that I was looking for. What I didn’t expect was the good company. I started on my own and the last dinner was with nine people at the table, French, English, an American who didn’t care for the risk of a Cuban stamp in his passport and me. 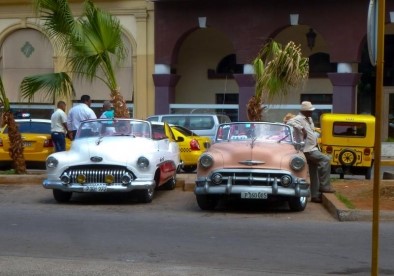 The journey back to Havana was “Cuban”. We fished the day as agreed instead of hanging out by the pool with beers and mojitos. We were in the lodge in time, changed and were at the airport in time, but remember flights in Cuba are “flexible”.

No plane… Then a Tupolev came in. Not our flight… There were some South Americans who translated. Our plane was still in Havana and needed to be turned. It made for some nice chats. Brazilians, Argentinians and a couple of my fellow anglers. So after a three hours delay we were eventually back in Havana. Another hour before our luggage showed up. Late arrival in the hotel. I took a walk around town between Che and Fidel. Some buildings in marvellously restored condition, others falling apart, the town left a mixed impression. I hope the opening to the US is managed very slowly and it will be a soft landing. A lot of the Cubans are still in the 1960s.

If anyone wants to see it as it is, please go soon. For me this was a trip of a lifetime.

For more information on Cuban operations and to take advantage of the current Euro exchange rate contact Peter McLeod or call our office on +44(0)1980 847389.