The Monarch of the River Itchen

Home | Fish Tails Blog | The Monarch of the River Itchen

Probably the largest trout ever caught in this country, if we except one or two in Alresford Pond, was caught in the river, between Mr. Dance’s and Mr. Crate’s mill, during Thursday night, by a man named Turpin. He states he secured the monster with a minnow on a gut cast, a small hook, and a hazel rod, and it was not brought to the bank till two hours and a half after being hooked. This fish has for a very long time excited the envy of anglers, many of whom have for two years past from time to time seen it in its native element. It had many narrow escapes during its career, but had always hitherto succeeded in escaping before being landed. As it lay on the slab at Mr. Z. Z. Butcher’s shop, the cast with which it was killed being placed on the fish, it was eagerly viewed by hundreds of persons. The fish was in capital condition, and, like most old trout, its lower jaw was crooked, but not to the extent seen in most cases with aged trout. It measured 32 1/2 inches in length, 21 inches in girth, was 9 inches wide in the largest part, and weighed no less than 16 lbs. 2 ozs. We understand that Mr. Dance has become the possessor of this fish, and has since handed it over to our local taxidermist, Mr. W. Chalkley, with a view to preservation. Cutlets have, we believe, been presented to several of our most ardent local anglers, who will no doubt pronounce them excellent eating. We trust that when stuffed, the fish, which was photographed by Mr. Rider, may find a final resting-place in our city Museum.

This fish is now in possession of H.G. Johnson, Esq., Winchester.

A wonderful story that was attached to a painting we found in a local tackle shop The Rod Box in Kingsworthy. Former owner of The Rod Box, Mr. Ian Hay, bought out local tackle store, ‘Chalkeys’ in the mid 1960’s, and acquired the painting along with the shop. 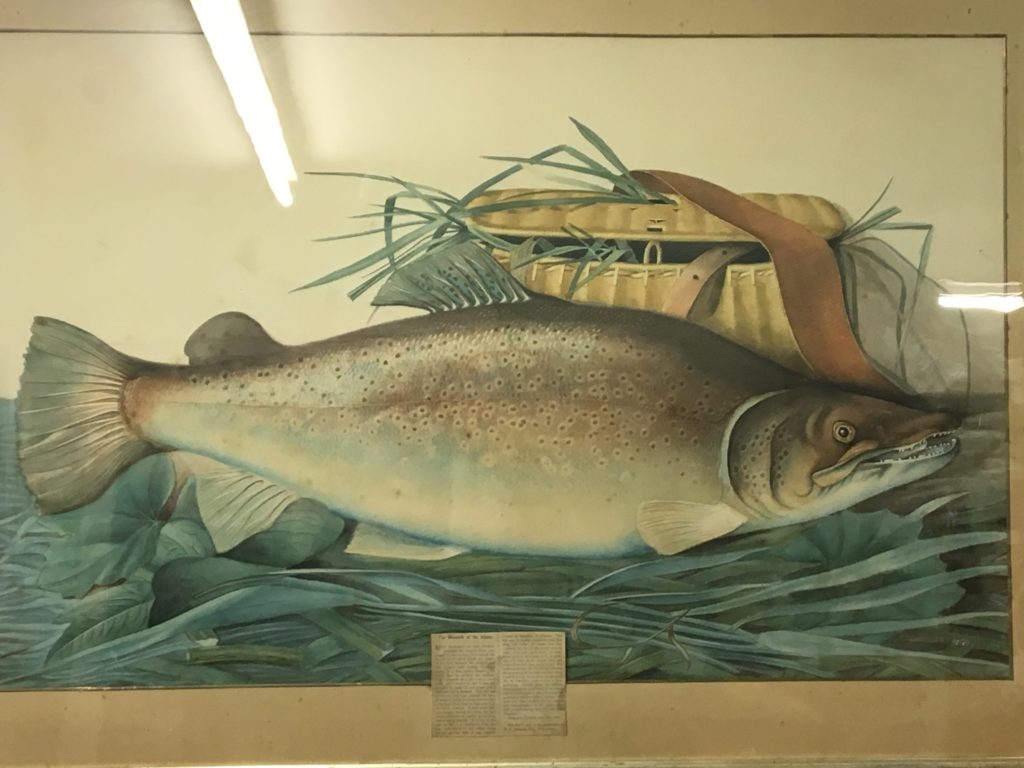 William Chalkley (1842 – 1922) was a self-taught taxidermist, who turned his hobby into a business. Originally Chalkleys (the shop) was a taxidermist, in the square in Winchester. William Chalkley in 1903 became the Curator of the Winchester Museum, his first task was to attend the damaged museum collection in storage, most of which had to be disposed of. Only a few items could be repaired and remounted, from this he created a taxidermy collection of the bird and mammals of Hampshire. Chalkley, as it seems to be, didn’t stuff a huge number of fish, but there are listed accounts of him doing so. In his later years, his nephew joined the business, and started to turn it into a tackle shop.

We have now begun searching for the Monarch of the Itchen in physical form, there is a lovely tale to this fish that Chalkley did in 1910. This fine specimen of an Itchen trout was caught at Durngate Mill in Winchester, the rumour for the size of this fish, was that it used to go up the overflow stream to the Willow Tree pub and feed on the scraps of food that were thrown in the river.

If anyone has got any information on the Monarch of the Itchen please do get in contact by email. Alternatively, if you would like to catch an Itchen Monarch of your own this summer call our office on +44(0)1980 847389.