Another two weeks action from Cosmoledo atoll in Seychelles covering 9-16 March 2017 and bringing us up to date with 16-23 March 2017.

The tail end of a cyclone has kept a strong North-Westerly blowing and over the change over day it had picked up to 25 knots with some heavy cloud cover. The weather conditions meant that the new guest’s arrival was delayed by two days while the IDC charter pilots waited for a gap to fly into Astove. Finally the day arrived and after a swift transition we had our new anglers on board ‘Lone Star’. Despite the weather and delays the new guests remained positive and excited for an intense albeit shorter week of GT fishing. 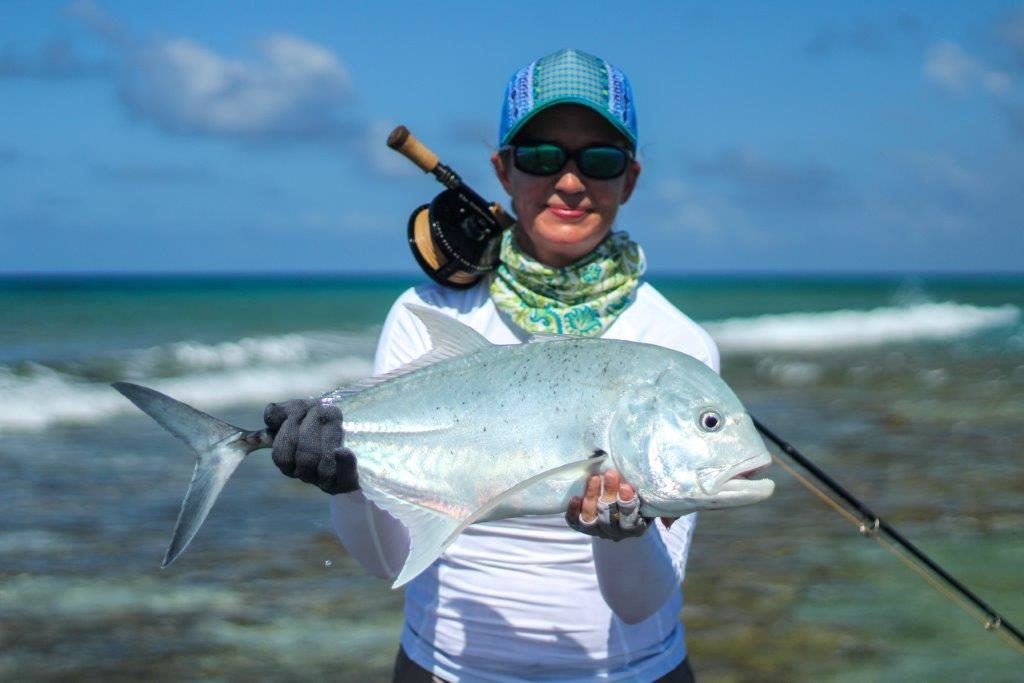 The group consisted of a family from Boston, Scott had fished Cosmo back in 2006; Xander, his son who is due to graduate from his senior year this spring and hopes to do some guiding before furthering his education; and Karen who is new to Cosmo and GT’s but certainly not new to adventure fly fishing. Suzan is a Seychelles fishing regular and ardent traveller was back with her friend David Joe, a New Englander and Striper fisherman on his second trip to the Seychelles, Joe fishes with a double hander to great effect. Finally, there is our friend Helmut Zaderer, Seychelles regular and fish punisher. If you go back through the Alphonse fishing reports you’ll see mentions and pictures of Helmut but these rarely do justice to his fish slaying reputation. Helmut used to be a serious Carp fisherman. The type that uses boilies and sleeps in a bivvy bags next to a quiver of rods with those alarms that tell you when you get a bite (I don’t fish for carp, I can’t remember what you call them, strike alarms?). Anyway, Helmut decided to try fly fishing and true to form and with no half measures he learned to cast and wasn’t satisfied until he was casting full fly lines. 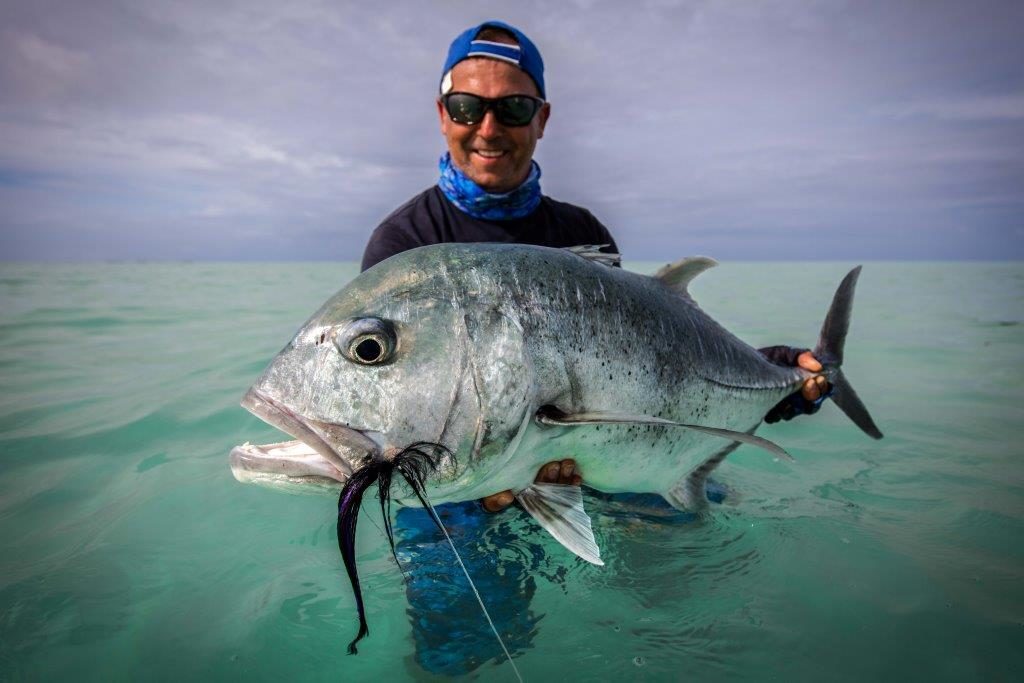 On this Cosmoledo trip, Helmut was champion fisherman yet again. In four days Helmut caught 25 GTs and 7 triggerfish. In one day he landed 6 GTs, 6 triggerfish and 2 bonefish (if he’d caught four more bonefish he would have caught six ‘Flats Slams’ in one day, but he opted for just two ‘Flats Slams’) 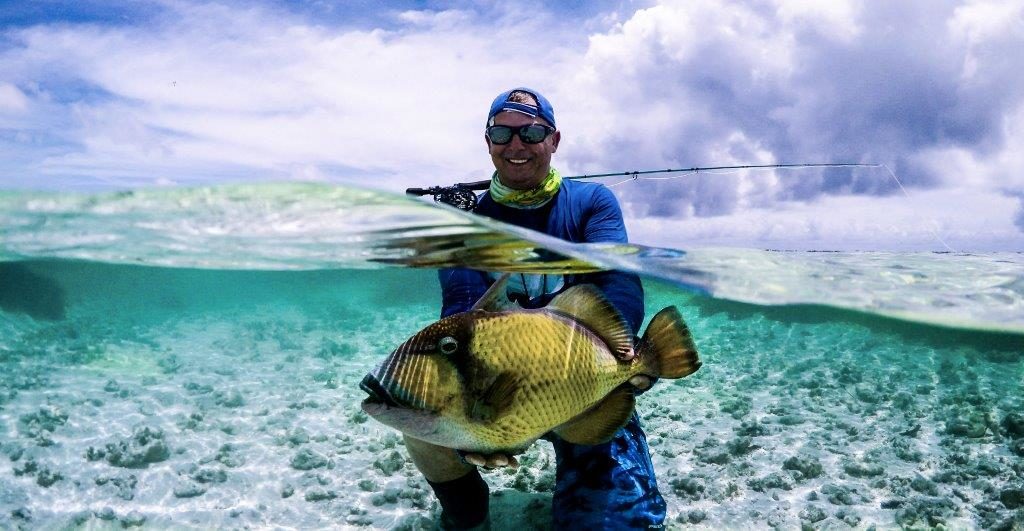 The rest of the group did well enough, despite some tough conditions. The groups total was 69 GTs, 9 triggerfish and a handful of some serious bones (Karen landed a 9 pounder). Whilst half the group departed the ship after 4 days of intense action packed fishing, Sue, David and Joe are staying on board for another week to remember.

This week saw the return of some familiar faces, with Joern and Maria joining ‘Lone star’ and bringing along good vibes, chocolate and good music. In addition, David, Suzie and Joe stayed on board for another week and completing the group John Ribic and Carla Kingsley from Montana. 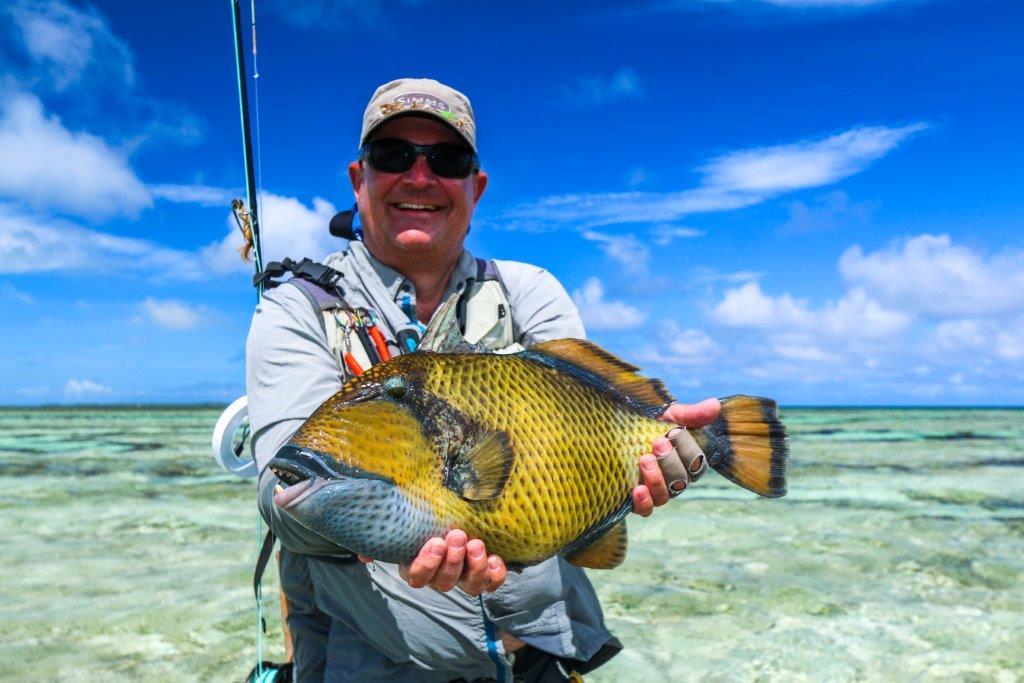 With new arrivals came a new tidal cycle and the perfect conditions for a milkfish frenzy. Cosmoledo has a reputation for great GT fishing, but the anglers were keen to also try and catch a milk. As the week progressed five beautiful milkfish came to hand to the delight of guests and guides alike. Triggerfish were also plentiful and six were landed throughout the week. 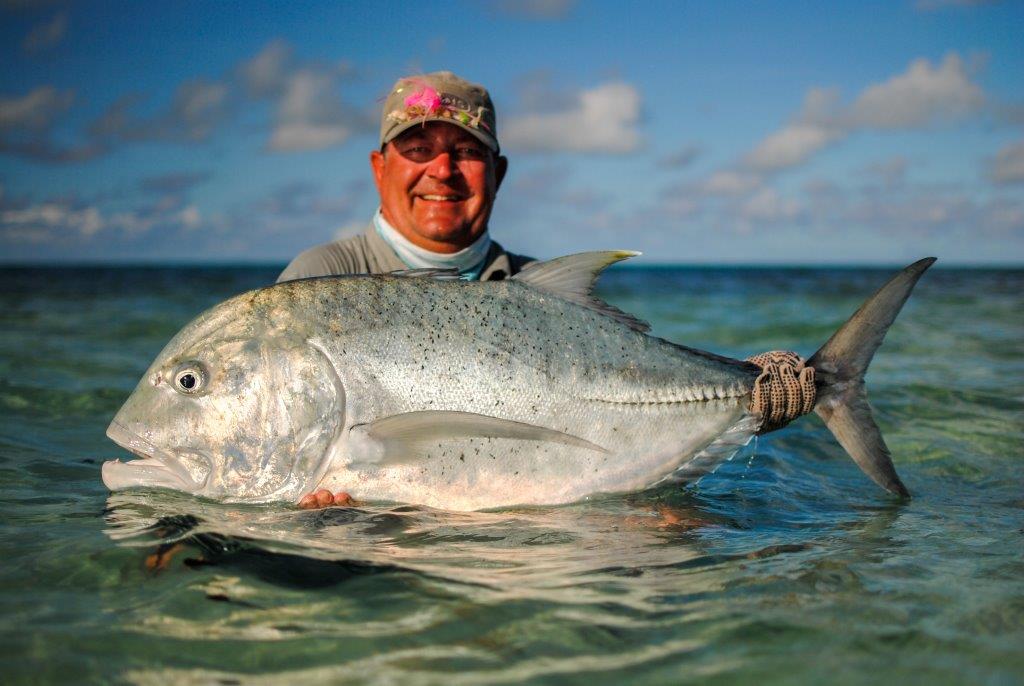 The GT fishing also lived up to its reputation with 67 landed for seven angles (average of nine and a half per angler for six days). Joern had a stellar day in the surf around Menai landing two GT’s over a metre, 100cm and 105cm to be precise. Joining the 100 club twice in one day is something truly special. John and Carla did very well, catching their first GT’s almost right away. Carla proceeded to prove that this was in fact her fishing trip while John took being out fished gracefully. Joe somehow found himself on a single skiff and took advantage of the one on one time with the guides to catch some great GT’s, as well as some monster bones. David, always game for anything and possibly the easiest guy to guide, quietly caught almost a third of the weeks GT’s himself, with 22 GT’s earning him the title of GT champion. 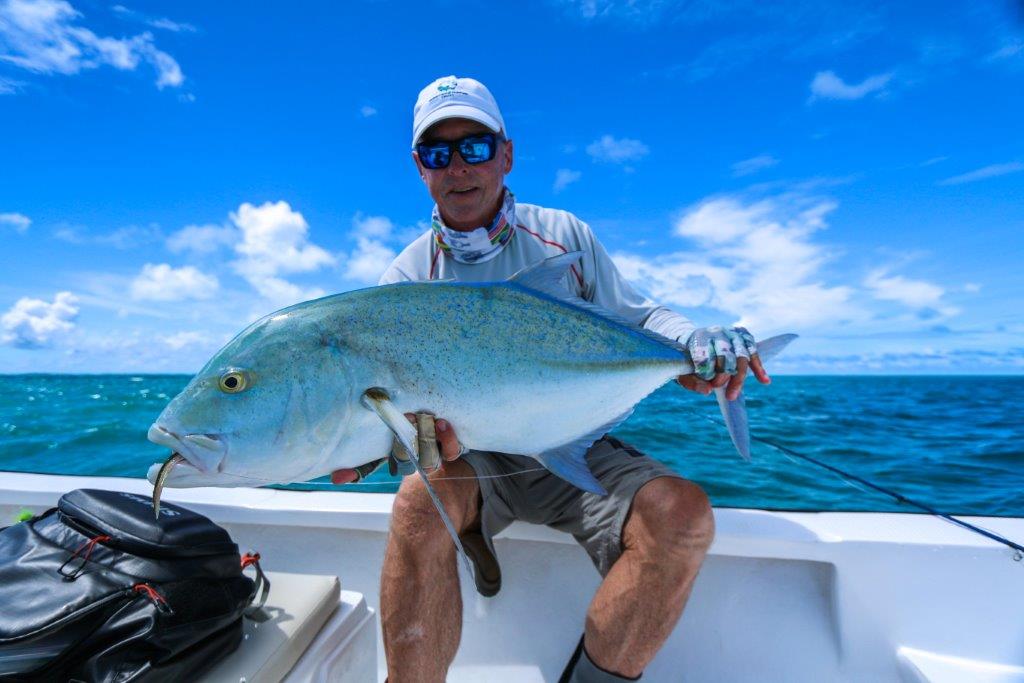 In all, a great week with great fishing and even better dinner time conversation. David, Suzie and Joe will be glad to get home and have a break after two weeks of non-stop fishing action and Joern and Maria who have spent three weeks fishing on Astove, Alphonse and Cosmoledo will surely need a good rest!

For more details on Cosmoledo or any of the other Indian Ocean atolls please contact Charlotte Chilcott or contact the office on +44 1980 847389. 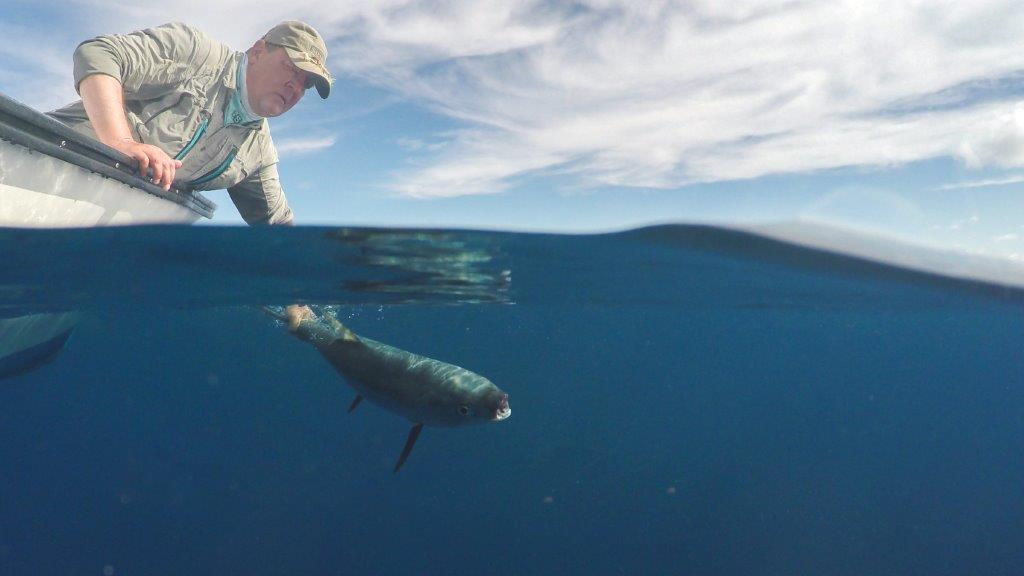