As fly fishermen continue to push the limits of what is possible there is one species above all others that captures our imaginations. Marlin are epitome of raw power and aggression.

Even before Ernest Hemingway graphically depicted the struggle to subdue one of the most iconic gamefish in the history of sport angling, marlin and other billfish have sparked the imagination of anglers around the world. The very pinnacle of our sport, pushing the envelope and locking into a hot marlin on fly can be one of the greatest thrills of a fly angler’s career. And due to special man-made structures known as FADs, Costa Rica is hands down the best place in the world for fly anglers seeking an encounter with such an awe-inspiring fish. 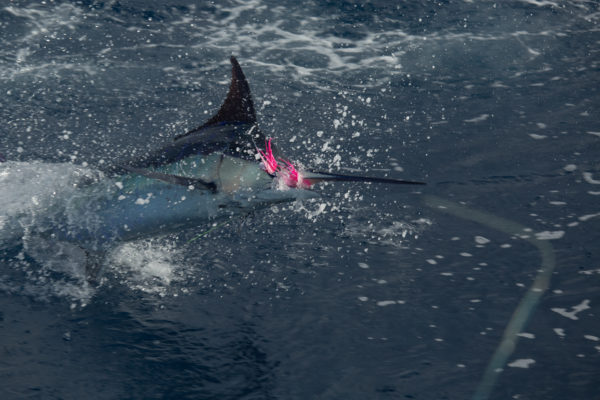 We are delighted to bring you a new long range mothership operation that fishes some 100 km off the coast of Costa Rica. Equipped with a mothership catamaran to live on and two sportfishers to fish from at last fishermen can remain on the fishing grounds to try and realise the dream of landing a marlin on a fly. In the open ocean, even a small floating piece of driftwood can have an abundance of life, and FADs prove to be incredible at bringing in such life in epic proportions. Staggering numbers of baitfish, small tuna, squid, and other ocean inhabitants take residence in no time, and where there is food the marlin are very close behind – and the numbers are mind blowing.

This is could just be the world’s best place for a grand slam on fly, and anglers will encounter many blues throughout the week with some sailfish and striped marlin mixed in. Rough average numbers of released fish in 2016 and so far in 2017 are 18-22 fish during this type of programme (4 days fishing) with blue marlin ranging from 100-300 lbs – perfect size to target on the fly. 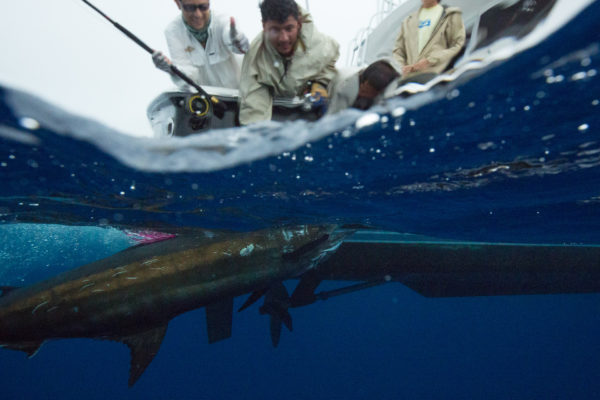 Limited to just four anglers the itinerary (which can be tailored to your needs  ) is:

DAY 2 (Monday) – Private transport to airport, early flight to Osa with Nature Air, get on boats and run to grounds, fish that day around FAD for marlin and other pelagics (shared occupancy onboard)

DAY 3 (Tuesday) – Wake up offshore, fish around FAD for marlin and other pelagics (shared occupancy onboard) until 6PM, run back to Puerto Jimenez for 1 night arriving around midnight.

DAY 4 (Wednesday) – Wake up at marina in boat, option to chill on boat or get out and go hang out at Agua Dulce Beach Resort, have lunch, rest, shower, etc. Leave again that night to run to marlin grounds.

DAY 5 (Thursday) – Wake up offshore, fish around FAD for marlin and other pelagics (shared occupancy onboard)

DAY 6 (Friday) – Wake up offshore, fish around FAD for marlin and other pelagics (shared occupancy onboard) until 6PM, run back to Puerto Jimenez for 1 night arriving around midnight. Sleep on boat for night.

DAY 7 (Saturday) – Private transport back to regional airport in AM, flight back to San Jose with Nature Air, Departure

NOT INCLUDED – fly gear/flies/terminal (flies will be for sale and I can provide rental gear, both subject to availability), dinner night 1, phone calls, trip extensions, gratuities.