Home | Fish Tails Blog | Cuba- Airflo team fish Las Salinas, July 2013 trip report.
Tim Hughes from Airflo reports on a recent trip to Las Salinas in Cuba:
Fishing trips to Cuba are always special but this year was looking as being even more so as the Airflo crew would be fishing the newly opened area of the Zapata national park called San Lazaro.  After an overnight stay and a few Mojitos we made our way over to the Playa Largo hotel which would be our home for the next week, while not the most lavish of accommodation it certainly suits the anglers needs. 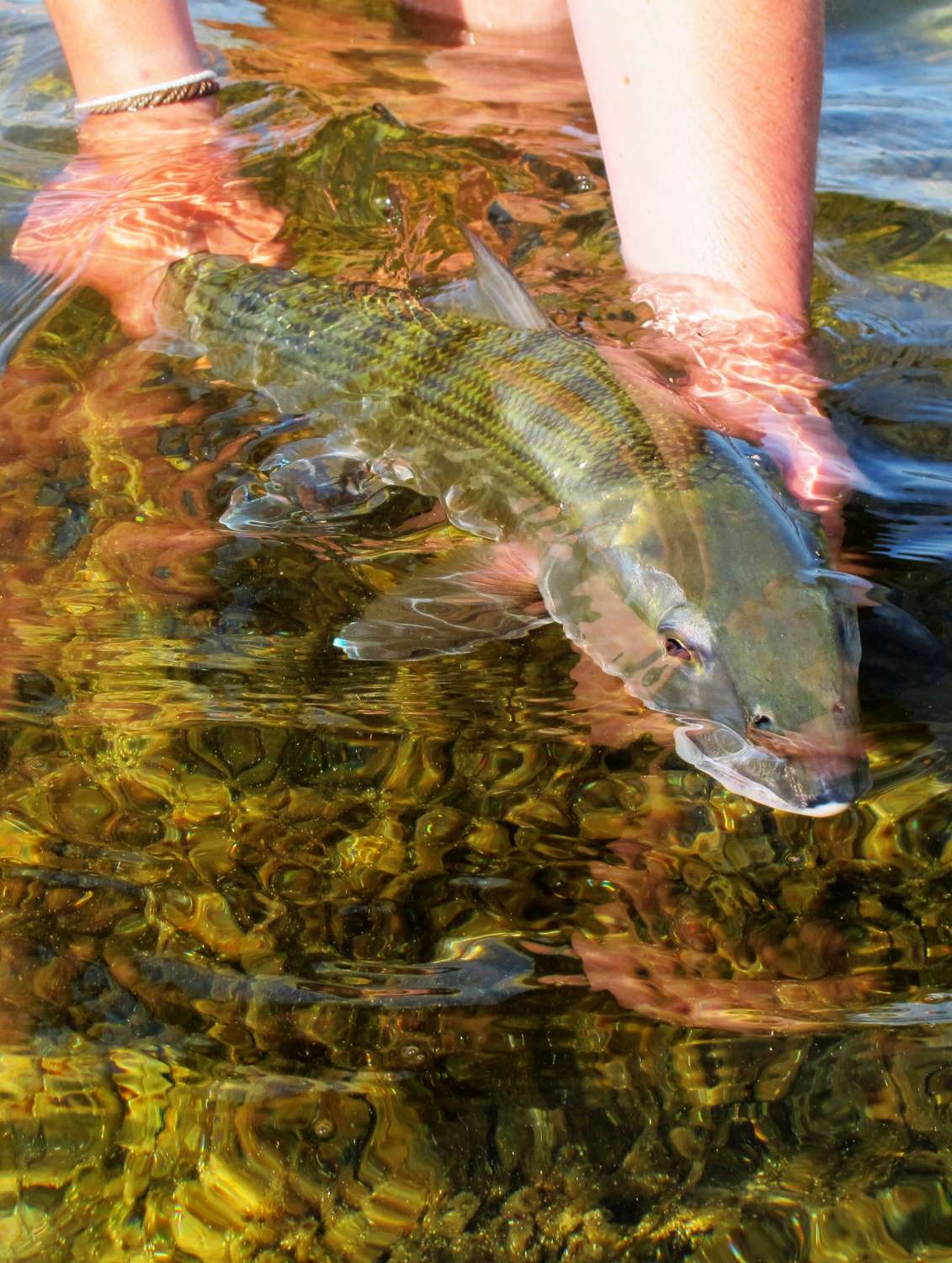 The next morning up bright an early and all very excited about the day ahead. The trip to the fishing grounds is an experience in itself comprising of a coach ride into the middle of the Zapata mangrove swamps where you suddenly come across the marina and after a 20minute boat ride down the narrow channel you pop out into what can only be described as a saltwater anglers paradise, miles and miles of pristine flats, channels and lagoons which had scarcely ever been fished. You will never see another angler throughout the day, and the diversity of wildlife is just mind blowing. The guides are all of the highest standard and Lazaro my guide for the week was no exception. A biologist and former Director of the Zapata Park his knowledge of its flora and forna was incredible and his fish spotting was as good as I have witnessed anywhere I have fished.

Late afternoon and back at the hotel’s beach bar with Mojito’s in hand the talk was of plenty of Bonefish, Baby Tarpon and lost Permit which considering the cloudy conditions was a great start. 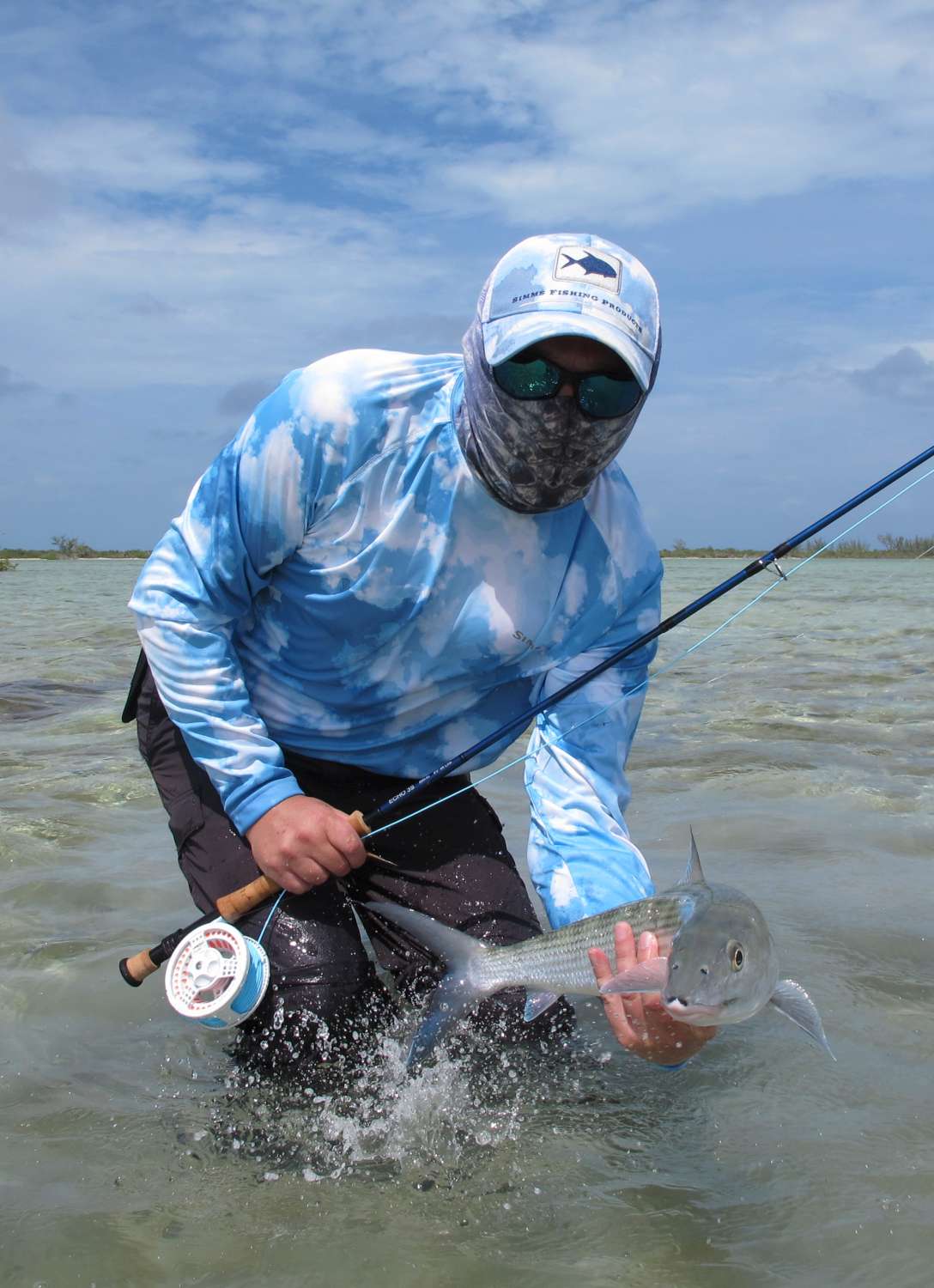 The conditions on the second day are bright and clear skies and low winds making spotting fish much easier and again many bonefish are landed together with a few baby tarpon but while many permit are spotted as ever with these fickle fish no landed. Due to the policy of rotating the fishing grounds so no area is fished two days in a row ensuring that it is never over fished. 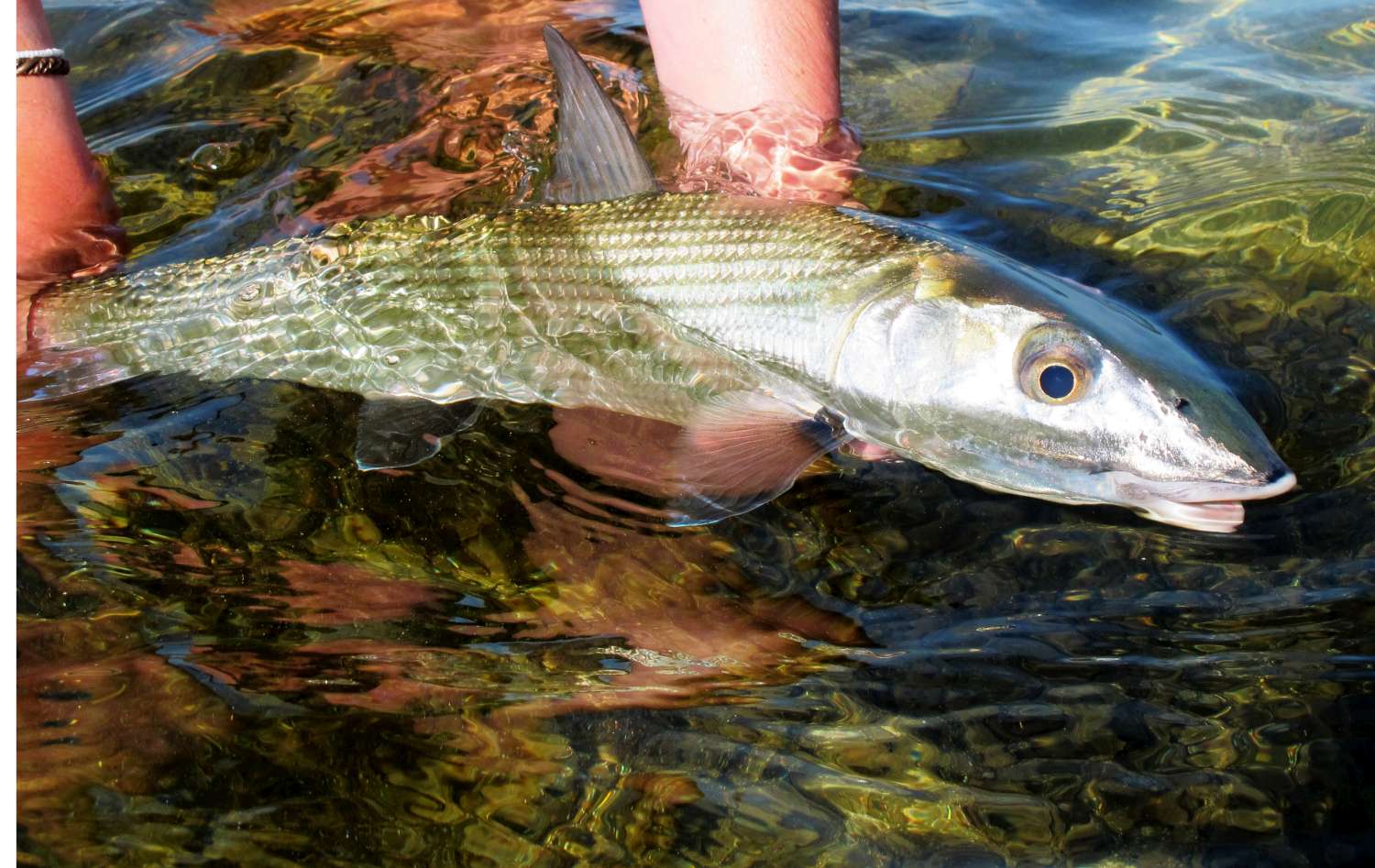 As the week moves on the fishing just seem to get better with the team starting to relax and sighting fish becomes easier. Airflo’s MD Rob Williams manages to hook-up and after a battle lasting 45 minutes and land an elusive Permit of around 25lb while the rest of the team continue to land good quantities of bonefish and baby tarpon. 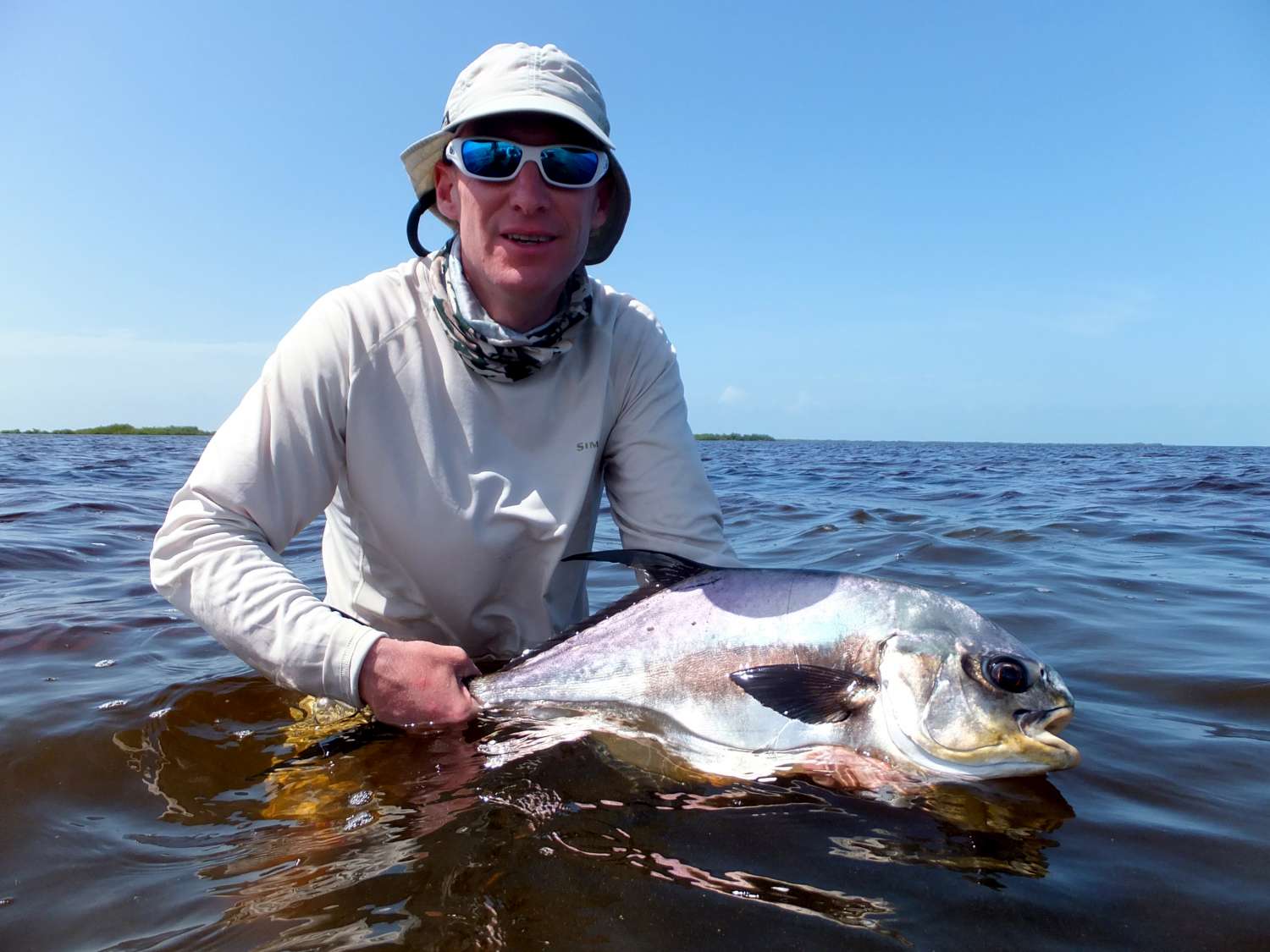 The last days fishing come way to quickly Rob Davies and myself decide to make the longer journey to fish solely for Tarpon. After an hour’s boat ride the skiffs arrive at an area of mangrove channels leading straight out into the Caribbean sea. The heat and humidity is intense and as the skiffs move through the channels we turn a bend to be face with Tarpon rolling and hitting bait fish everywhere. With shaking hands the first cast are made and it’s not long before the line is almost ripped out of my hands and a fumbled stripe strike is made but due to the incredibly aerobatic fight and almost armour plated mouth the fish first three fish are lost. Then a good hook hold is made and after a good fight on a #10 the first Tarpon is landed, at about 15lb only small by Tarpon standards followed by another slightly larger and then a much better fish or around 35lb is hooked and landed, this fish brings an end to another truly amazing and not the last trip Cuba. 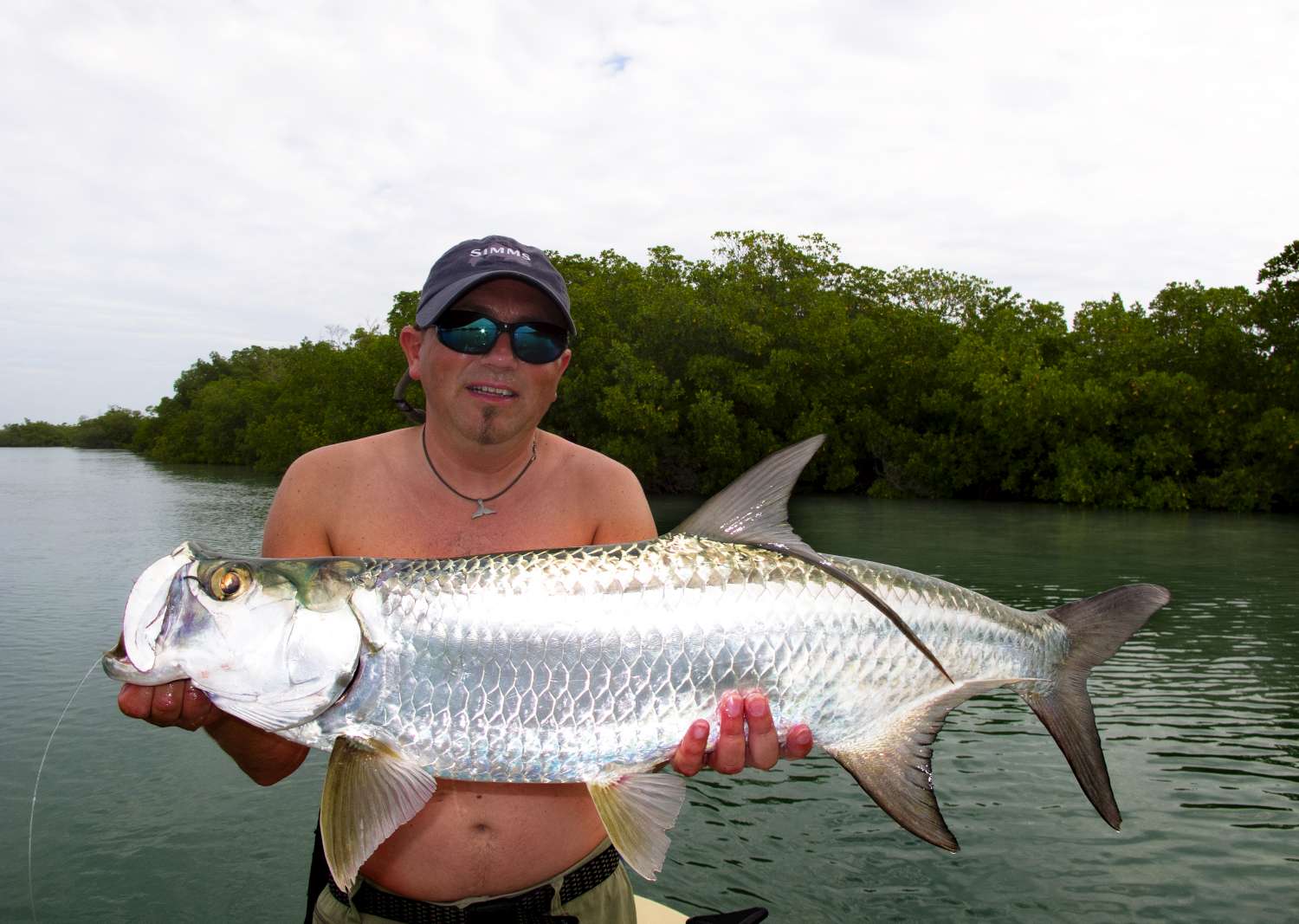 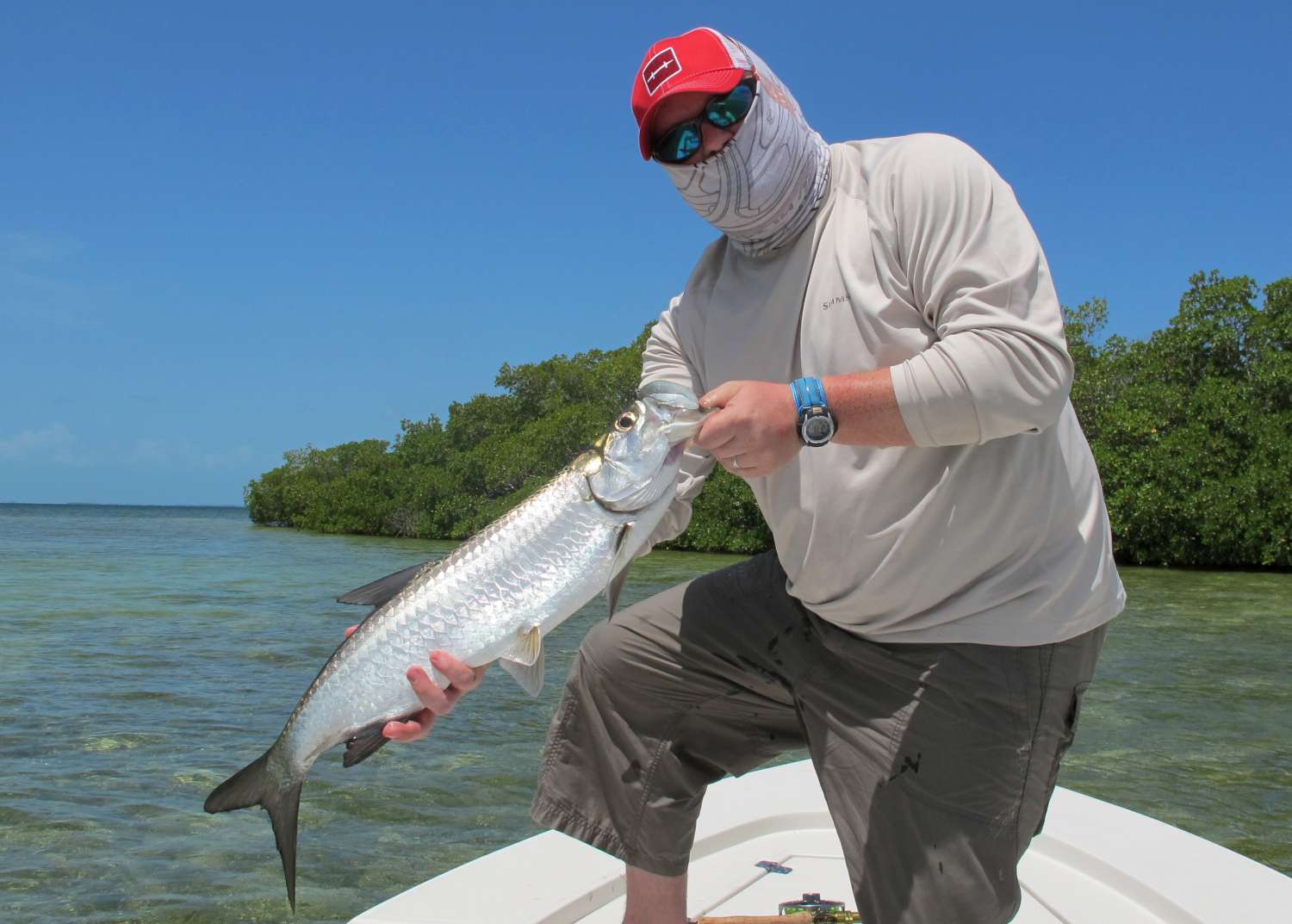 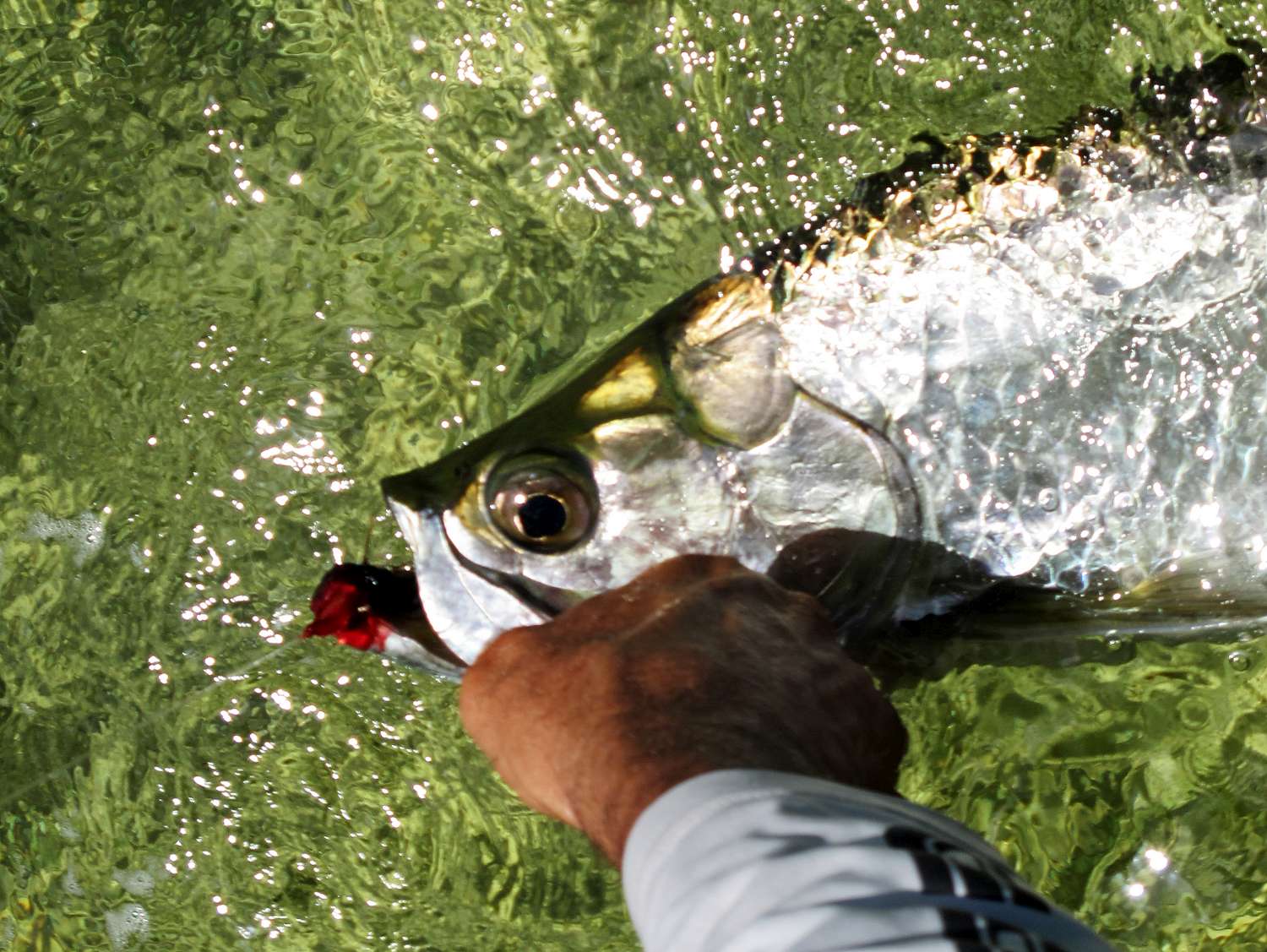