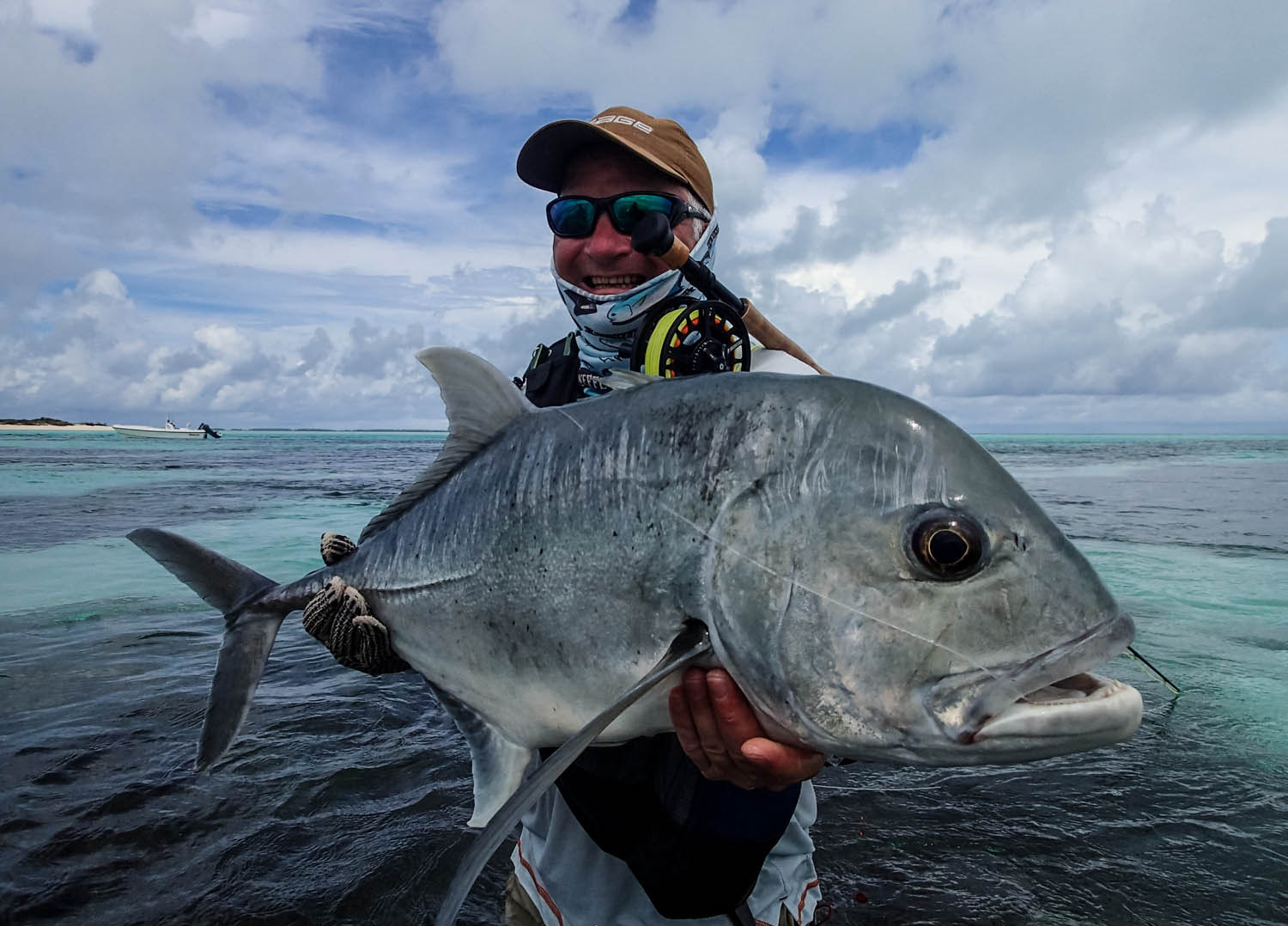 We welcomed 10 very enthusiastic anglers onto Farquhar this week, at least half of which were friends from past seasons. It was made clear from the get go that the iconic bumphead parrotfish and infamous giant trevally would be our anglers preferred quarry for the week. This is not an unusual request, but Farquhar would show once again she has plenty more to offer. 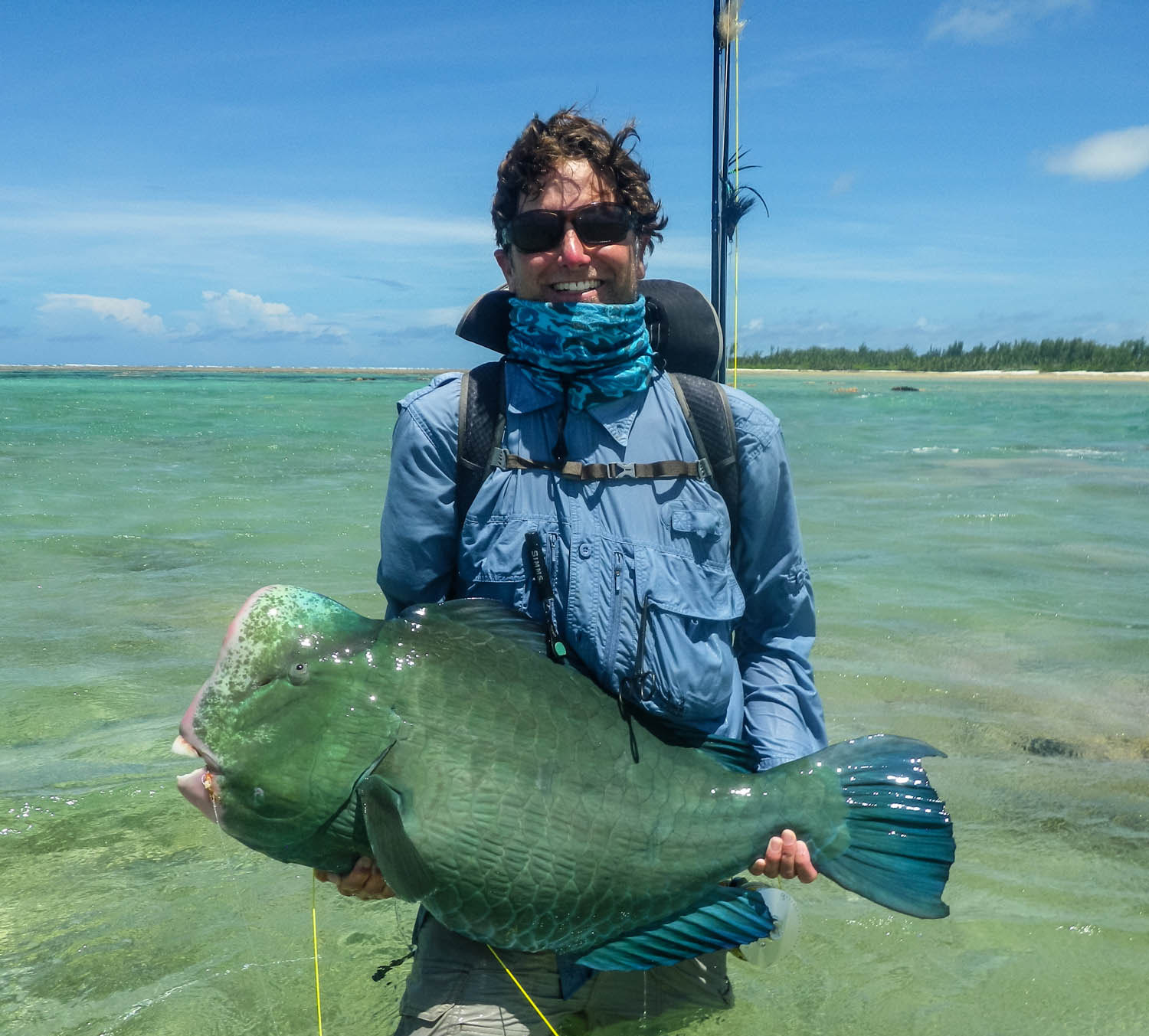 Father and son, Bruce and Brett both managed to hook bumpies early on, however Brett was the only one to land a good specimen. As it turned out this was unfortunately the only bumpy landed for the week, despite countless sessions stalking and casting at these mesmerizing tailing behemoths. Cyril, who was particularly eager to do battle with the bumpies enjoyed absolutely no luck on this front by hooking and losing two fish during the course of the week. The reality however is they not only require solid casting skills, but you definitely need a bit of luck to go your way when trying to stop a 40 – 80 lbs fish on a 9 weight. 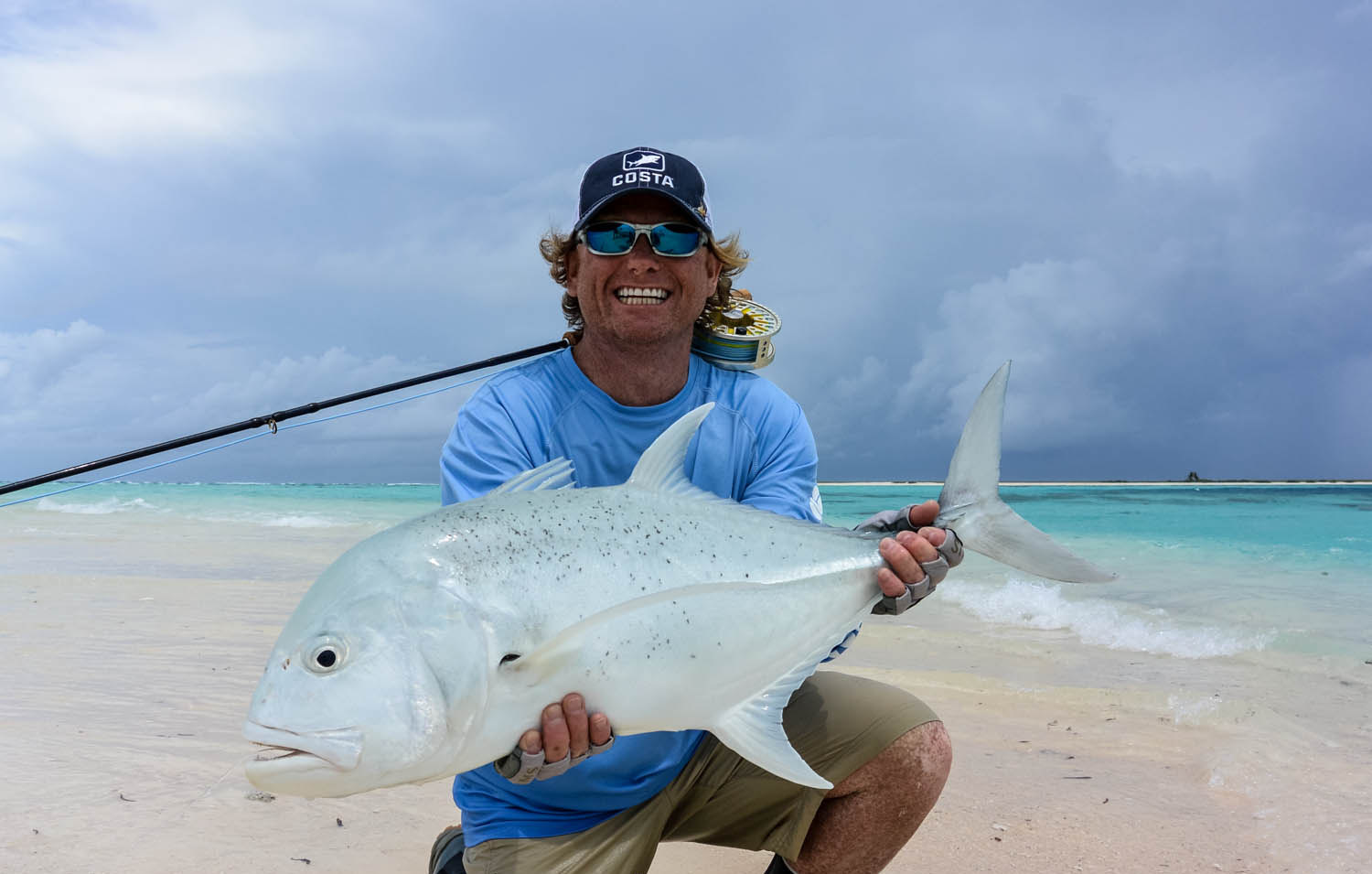 Old faces Gerard and Bully showed their experience by capitalising on two opportunities that were presented to them on the flats, each of them landing a GT a piece – the biggest of which measured a solid 82 cm. This spurred on the need to land a fish over a metre. They subsequently headed offshore and Gerard came up with the answer landing a gorgeous GT of 114 cm. Shortly thereafter Watty landed a second fish over the one metre mark with his prize measuring an impressive 117 cm. 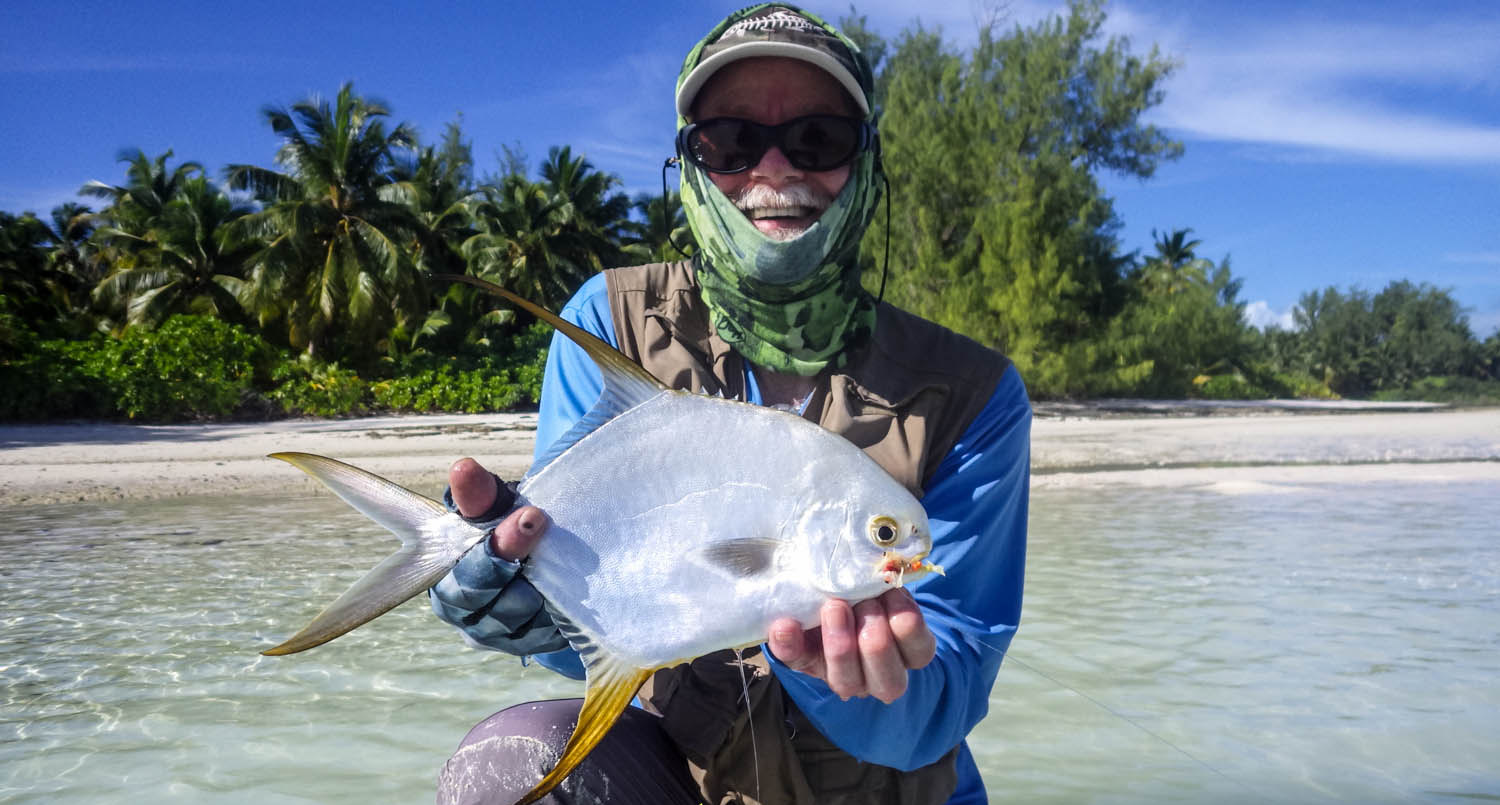 A special mention must go out to the first grand slam of the season. Guided by Brendan Becker, Bully managed to land a beautiful permit in the morning that had broken away from the shoal to chase down and sip up a Gotcha styled fly. This was followed by an exceptional bonefish that after tailing hard on the fly, set off on a series of long runs before coming to hand. Their efforts quickly shifted to the coveted GT and after hours of searching, a simple slap (Bully slap) of the fly next to an eager specimen GT resulted in a slam that left both angler and guide ecstatic. Congratulations Bully, this is an exceptional achievement! 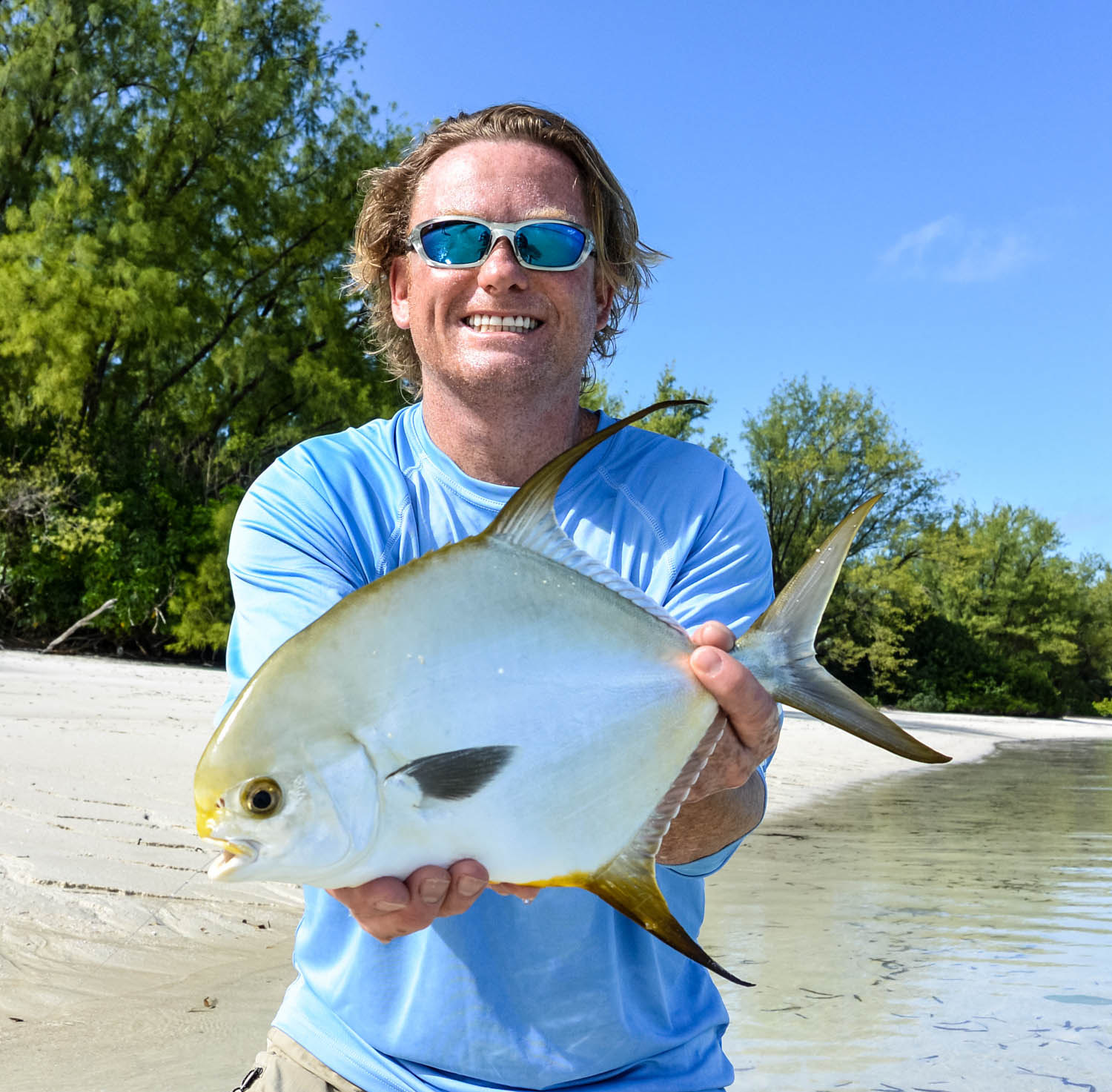 Farquhar is historically not known for huge numbers of permit, however this season good numbers are being seen on an almost daily basis. So much so that Keith landed our sixth in just three weeks. Keith has travelled to some top destinations trying to catch these fussy buggers but to date he had experienced no joy. Guiding has many highlights, but the one that tops everything is seeing the joy on a client’s face after he has landed a fish that has eluded him for many a moon. Congratulations Keith on your “holy grail”! 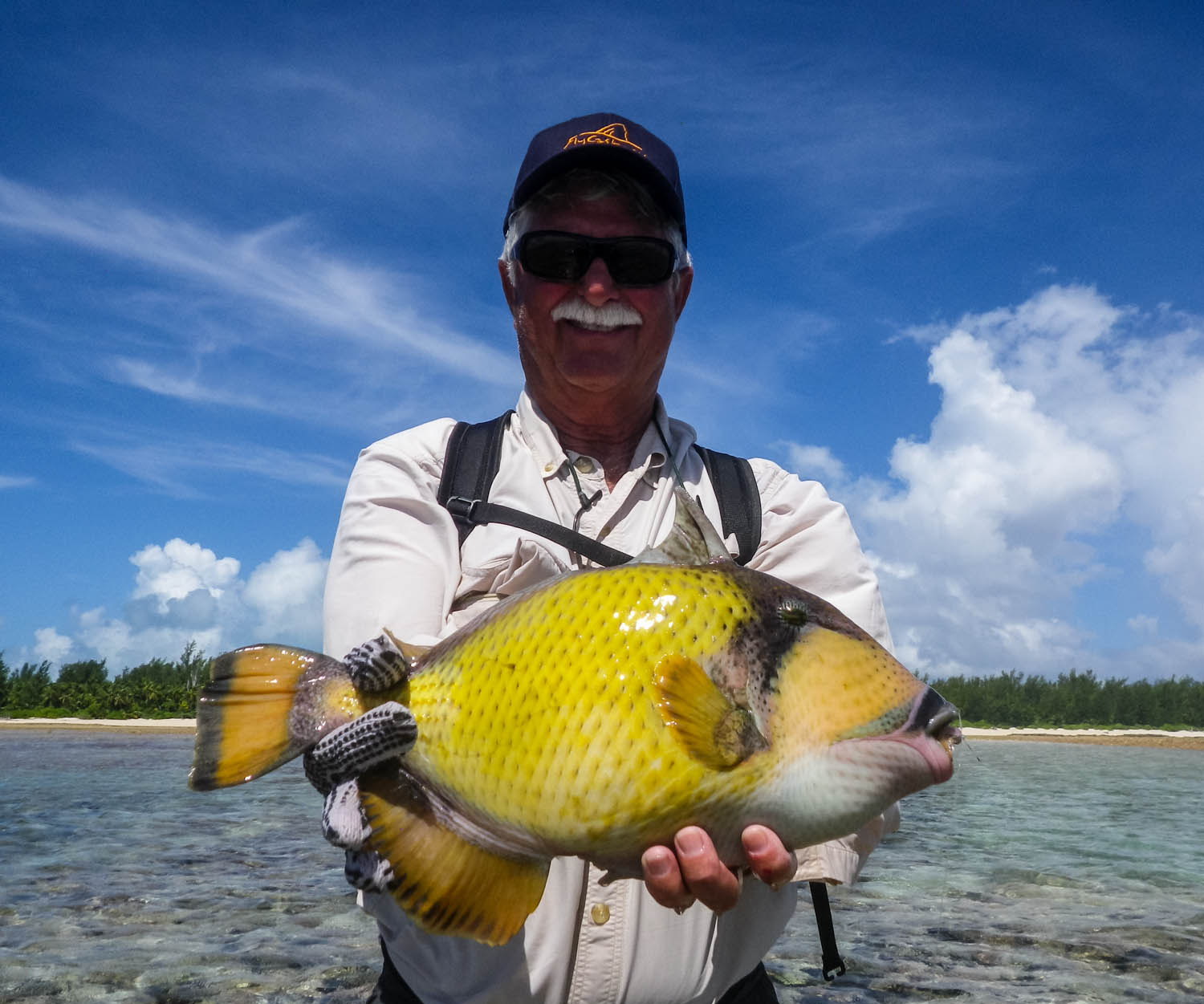 Seasoned angler Bruce focused most of his attention on targeting Farquhar’s triggerfish. After showing great finesse in presenting a crab pattern to dozens of the wily devils, a giant trigger chased down and crunched his fly resulting in a very happy angler. He later added to his species list by calmly flicking a crab pattern at a school of Golden Trevally who were tailing hard over a turtle grass flat. Our first for the season, the beautiful fish measured a whopping 81 cm, which according to the length to weight conversion table would have broken the world record by three pounds. Although the intention of the fishermen is not to claim the record, this is still a truly amazing catch! 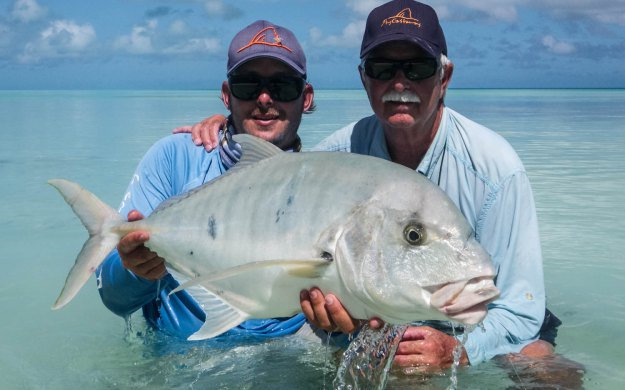 All in all a great week was had by all with some truly memorable catches being made. Like all fishing, the stories of the ones that got away will remain embedded in the memories of the anglers and remembered as fondly as the ones which came to hand.