Wading and sight fishing the flats is hugely dependent on sunlight, an element which was sadly lacking for the first few days of our 5-12 Nov week on Farquhar. This made seeing fish very difficult often resulting in fish being seen right at the last minute resulting in numerous good fish being spooked.  Adding to the guides frustration is the fact that there are some really really good fish around at present.  Our group however included some fairly experienced anglers and with their positive attitude ensured we were in for a good week. 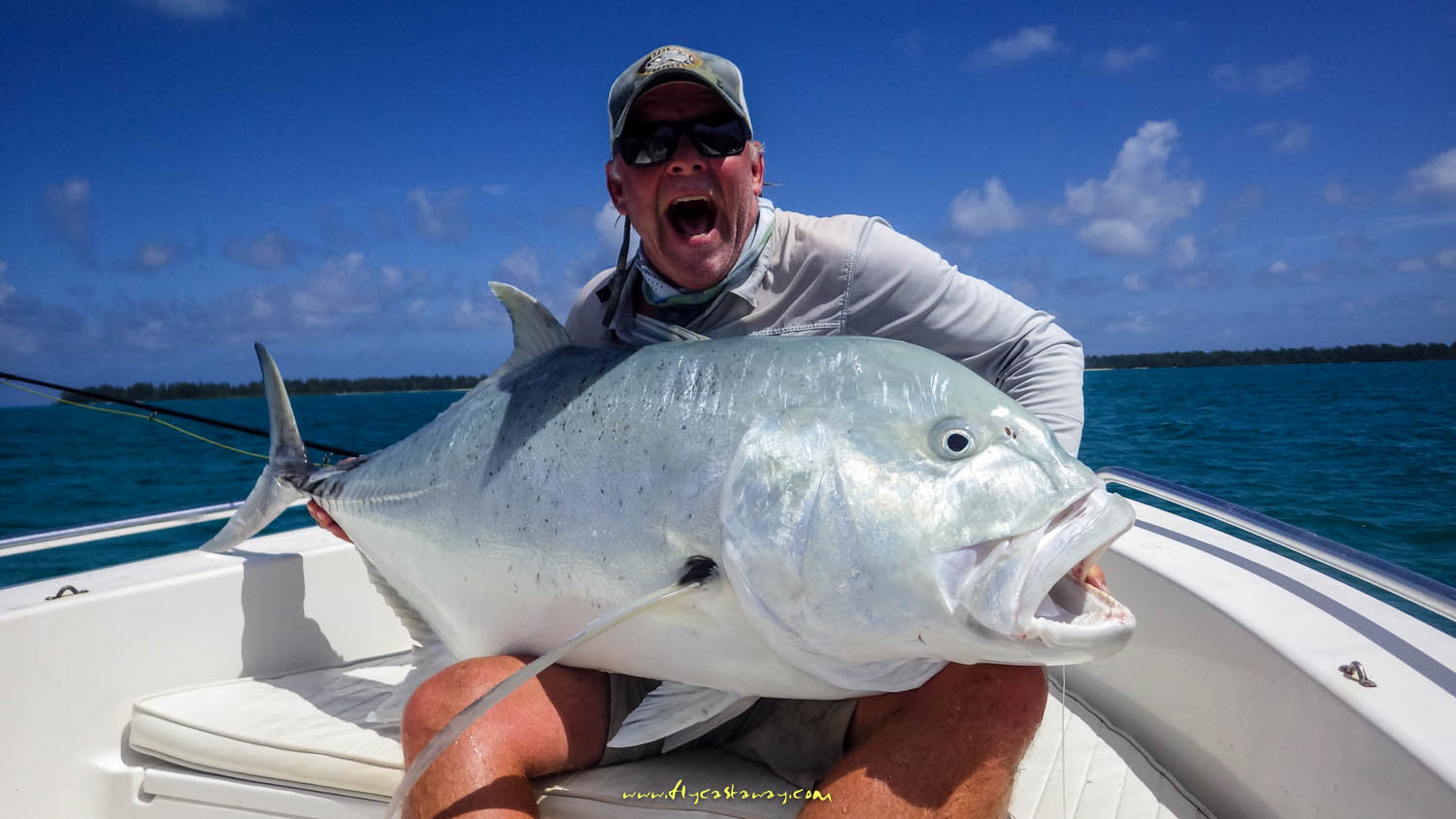 Billy managed a 96 cm GT on the first day in adverse conditions, whilst our group from Apalachicola Outfitters wet their GT and Bumpy taste buds as they tested their skills against two of our favourite foes. Travis landed his first ever GT, whilst Patrick landed our first parrot for the trip. As is often the case, attention and curiosity quickly shifted towards Bumpy fishing as the intrigue towards the big blue fish peaked. Tom and Michael set out with a clear plan to target them and were rewarded after countless casts with Michael landing two fine specimens. By this stage Gerald had met his arch rival.  After 11 …yes 11 hookups he showed some scary determination by landing a gorgeous fish on the final day. 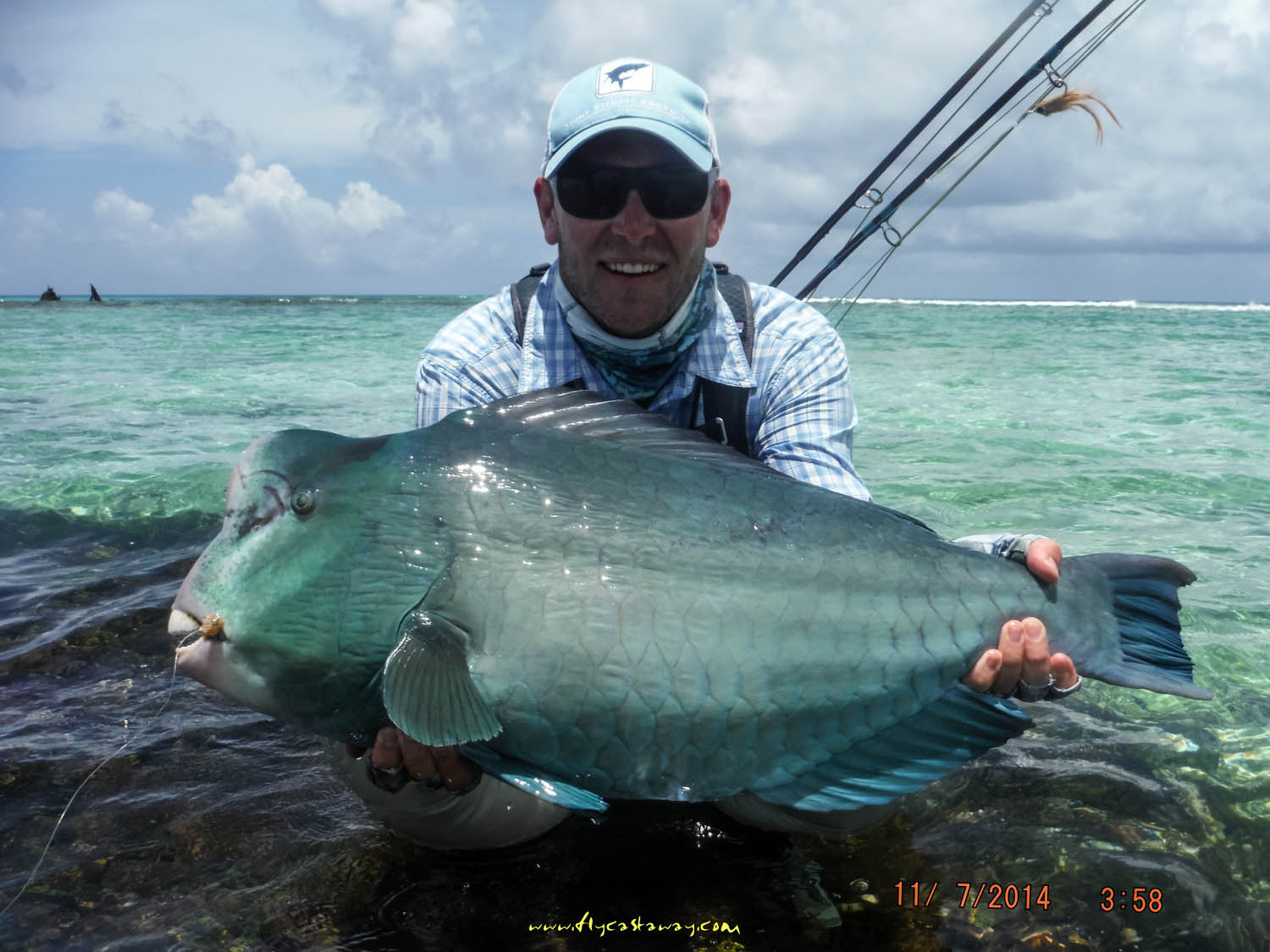 But this was not his only feat as he landed a very nice Moustache Triggerfish to boost our species tally.With the weather still not doing us any favours, Matt showed us some classy angling by landing our first meter GT for the week, a stunning fish which measured 105 cm. Congrats Matt, welcome to the club! Craig and Billy, both of whom are avid fly anglers, also tried their luck with offshore fishing and managed to land some very impressive catches. Over and above the many small GT’s fish that they landed they landed six fish over a meter. These included a 109 cm, 111 cm, 124 cm, 104 cm, 129 cm and 119 cm fish. Billy also managed to land a Sailfish which danced across the ocean before coming to the boat, as well as some Tuna up to 40kg. Obviously the Tuna was well received when one was brought back to the kitchen for Sushi!In saying that, by the end of our second last evening all of the guides had had enough of the lousy weather. 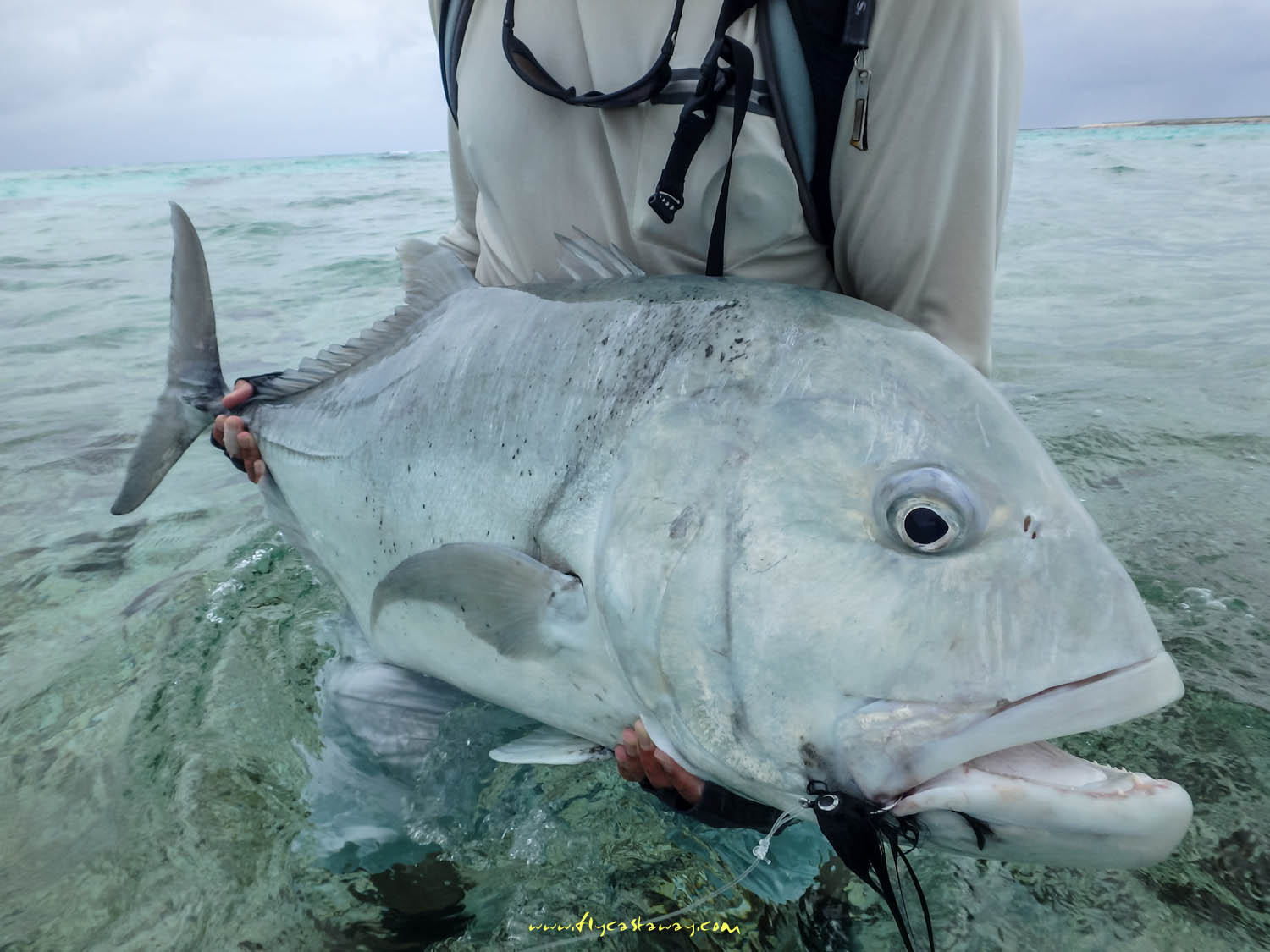 There is nothing more frustrating knowing the calibre of fish Farquhar has to offer only for an outside element to come and spoil party. Thankfully however the sky opened on our final morning with the first bit of sunlight in four days. After a short guides meeting we hurried off to our chosen areas with one thing on the mind…..to catch fish, many many big fish. By 10 o’ clock it was happening, Patrick had landed two GT’s (96 cm & 87 cm), Travis had three (91 cm, 82 cm, 76 cm), Michael had two (75cm & 85 cm) and Matt a fish of 72 cm. 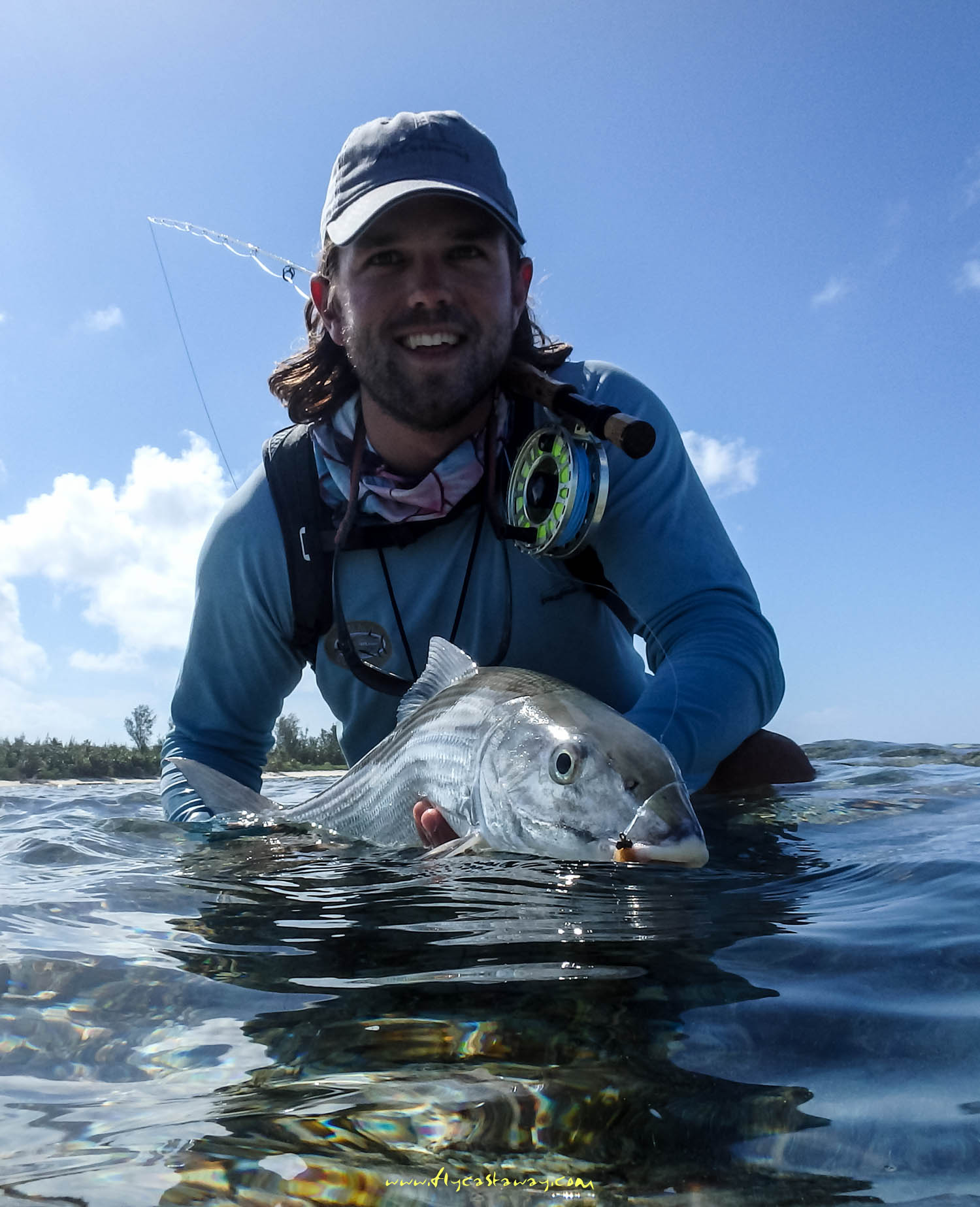 The cherry on top however went to Tom who had shown incredible patience throughout the week. His massive GT measured 135 cm from fork to tip aand was a truly unforgettable sight to watch as it devoured the tan brushy fly in skinny water. Congrats Tom …a fish of a lifetime and I’m sure worth the wait! In total  40 GT’s, 4 Bumpies, 1 Trigger as well as plenty of Bones up to 6 lb.  were landed during the course of the week. Considering the lack of light we endured, a truly solid effort and one that will not be forgotten in a hurry! Thank you to all our guests on the week. We thoroughly enjoyed having you out on the water…come rain or shine you were great to fish with! 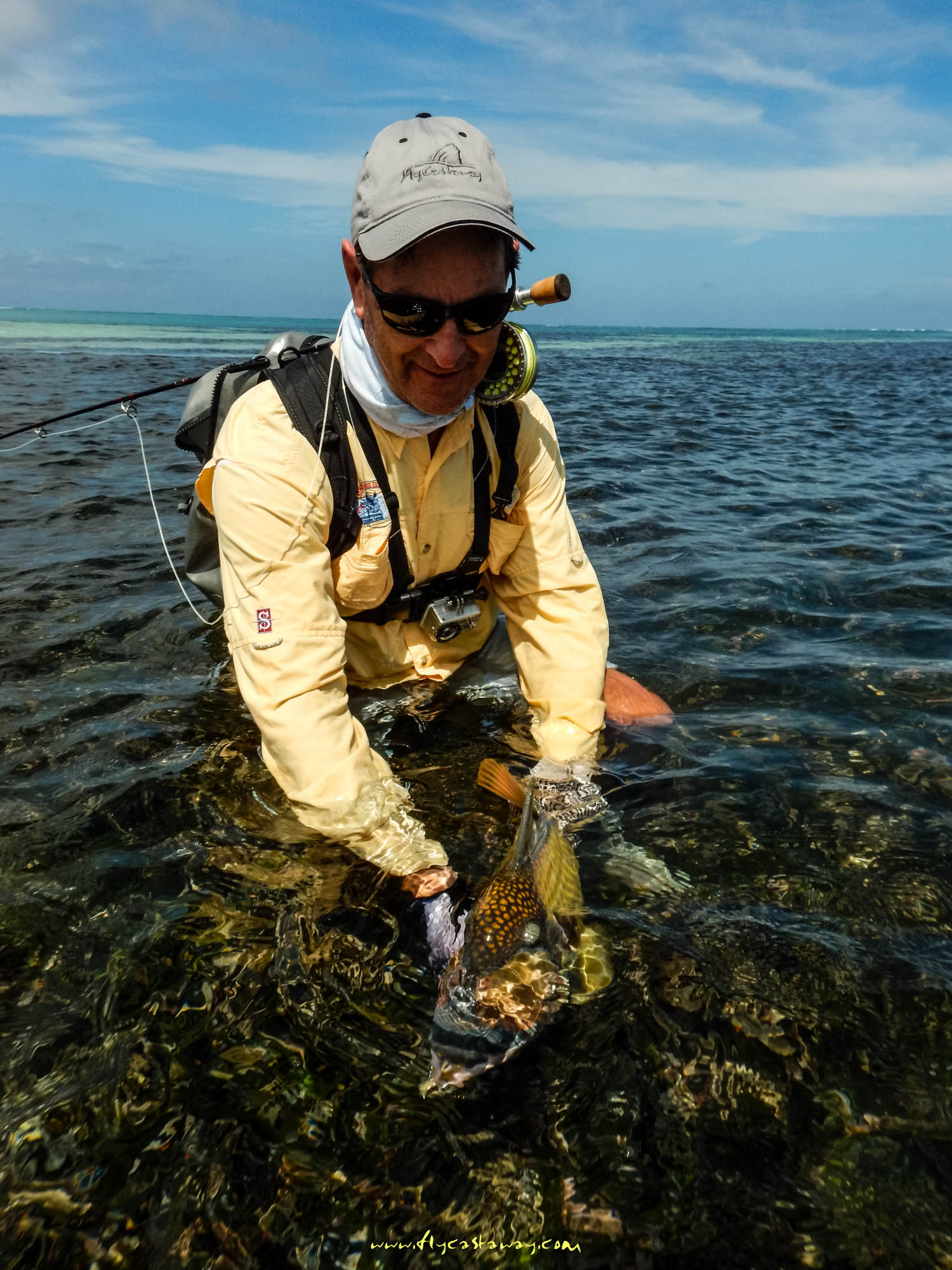 P.S.We are starting to see good numbers of both Milkfish and Permit, so keep checking up on us as the weeks develop. As always Farquhar still has plenty more to offer!