The FlyCastaway guide team welcomed some fresh as well as some familiar faces for the first trip in April 2015. Calm clear conditions were enjoyed by all during the first three days, whilst some tougher conditions arrived to close out the week.  The flat seas during the initial stages produced numerous shoals of Milkfish, unfortunately luck was against our team of guests. Despite numerous casts made to the pods of feeding fish, we were unable to get the hook ups we were so desperately after. Despite this, great fun and excitement was had by all who cast at these iconic fish.

The GT’s were spread across the atoll and in typical Farquhar fashion many of our opportunities were as a result of the GT & shark/ray partnerships, an exciting phenomenon just to witness. Frikkie and Andy both managed to capitalize on the daily opportunities and landed their coveted GT’s.  However not all GT stories end in tears of joy, as such our condolences go out to Gerhard’s who watched his GT swim away with half his fly line!  The pick of the stories however must go out to Zenon who lost an enormous fish, which would have measured around the 130 cm mark. The fish was surprisingly spotted on the back of a Manta Ray and after a brutal eat, the fish sped off into the distance ripping backing off at a frightening speed. Sadly however the hook pulled which left both angler and guide in shock. This scene will undoubtedly be imprinted into Zenon’s memory for a long time to come and will no doubt spur him on to meet this monster once again. 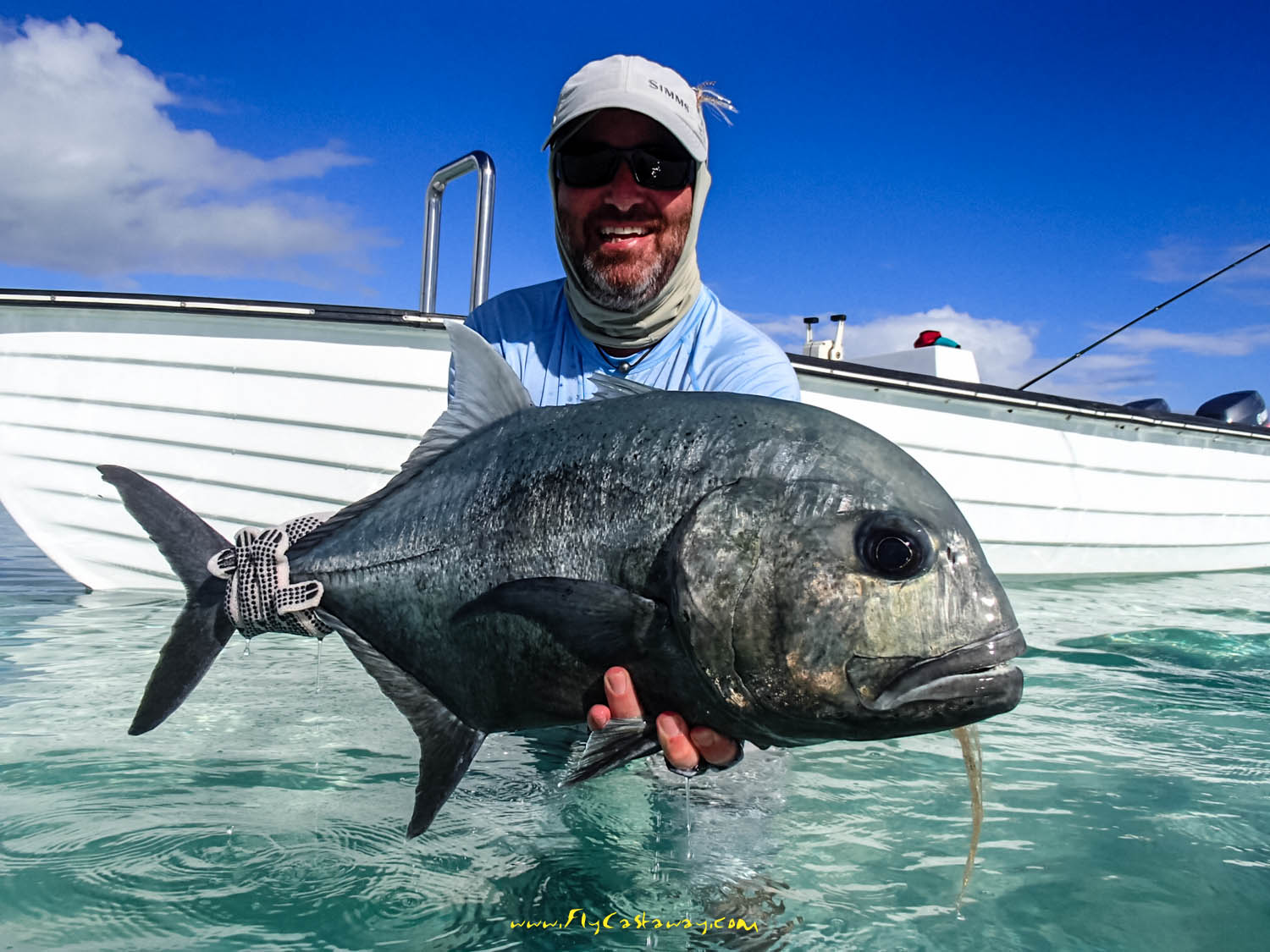 The Bumpies were around in good numbers, their enormous tails mesmerising our anglers for hours as they searched for the solid hook set. The connections came, but as we have learnt that is only half the job done. Gerhard managed to lose four in total during the week, whilst Zenon lost two. Frikkie however made the most of the opportunities that presented themselves and landed two great fish.  Congratulations Frikkie. Triggers too were around in good numbers but despite multiple hook ups only two fish were landed. It is no wonder why each of these weird and quirky fish landed is held in such high regard. 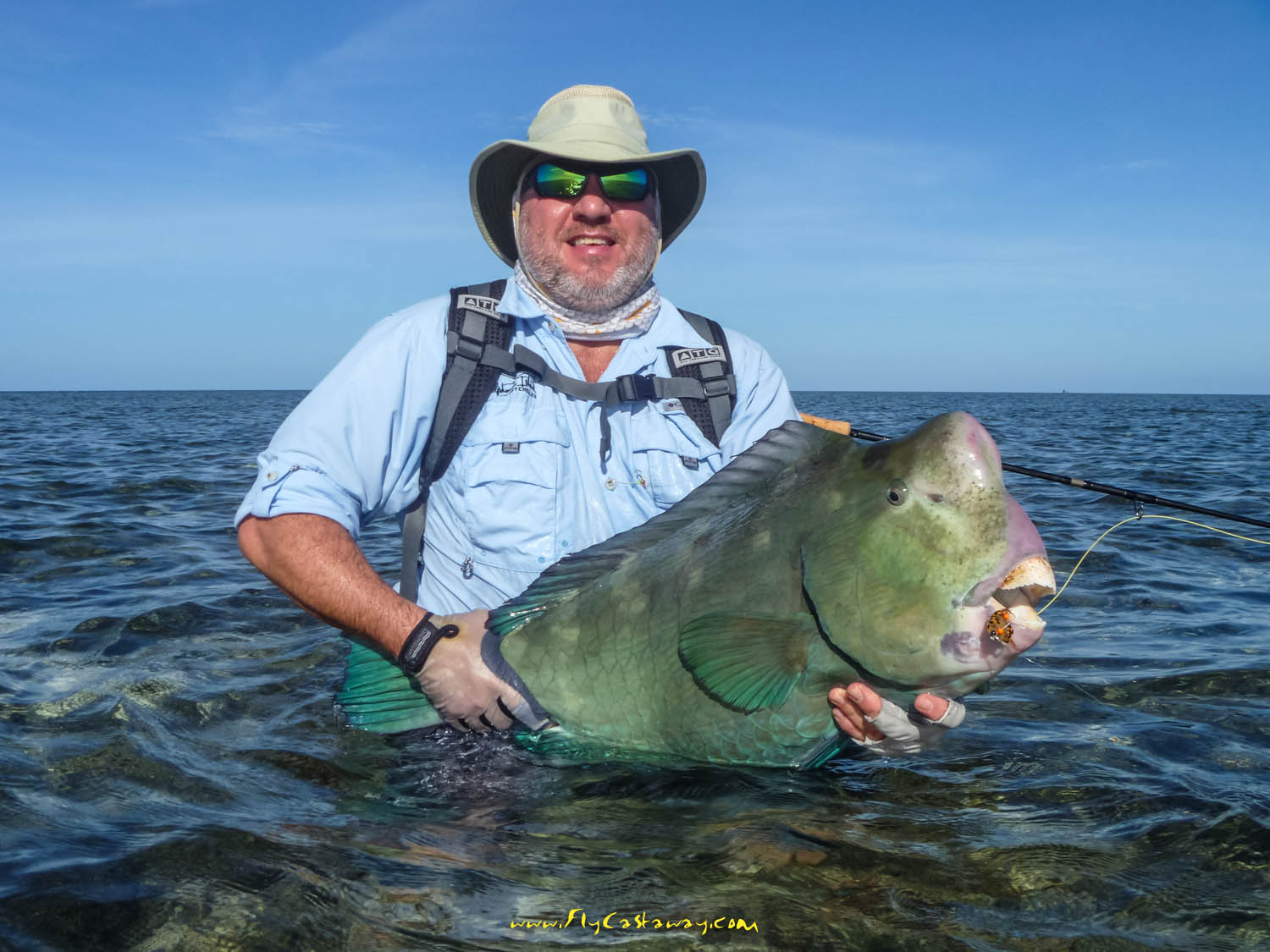 Farquhar’s Bonefish are often overlooked by many of our guests, however the fishery consistently produces excellent fishing for this species by Seychelles standards. With the full moon spring tide numbers of Bones were seen on many parts of the atoll, either in the form of huge shoals or the more classic singles and doubles. Our guests cashed in on the action and landed some really great fish. For some of the guests who had never fished for Bones before they quickly realized why these shallow water speedsters are one of the cornerstones of the saltwater fly fishing industry. 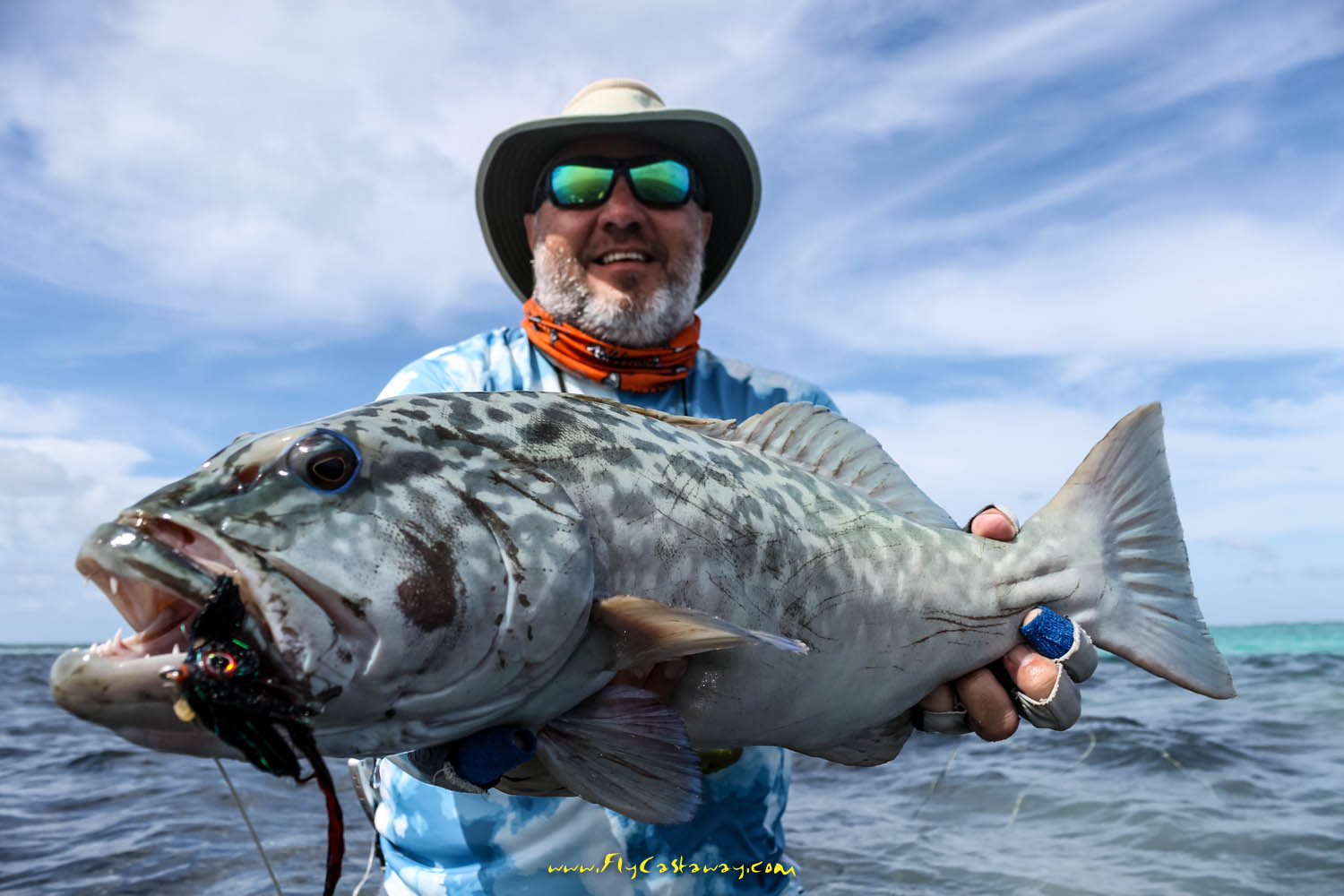 The offshore fishing at Farquhar continues to enthrall all who give it a bash, and whilst Farquhar’s flats are well known for their diversity the deep blue does not disappoint in this regard either. Dogtooth Tuna, massive GT’s, Napoleon Wrasse, Golden Trevally, Yellow-spot Trevally, Bluefin Trevally, Boha Snappers, Tropical Amberjack, Greater Amberjack, Black Jacks and countless Grouper species all made an appearance and added to another very enjoyable week out in the middle of nowhere.

Until next time……
The Farquhar guide team