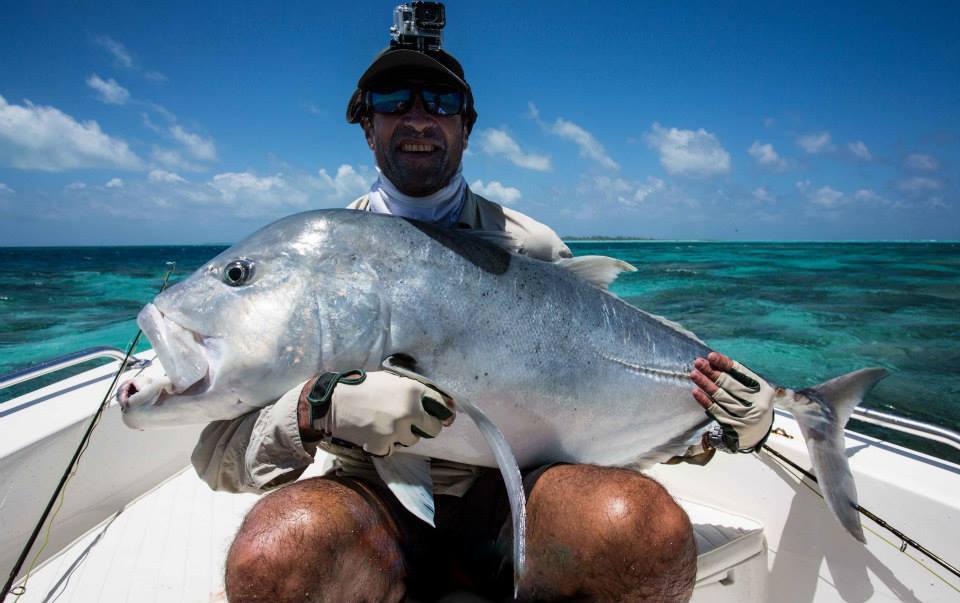 The Seychelles are open for fly fishing business and trips to Farquhar depart on Mondays, returning to Mahe the following Monday with a maximum of 12 anglers on board the IDC flight. Farquhar has just completed its first week with fantastic fishing all round, GT eating birds and sailfish hunting down the teasers. Gerhard Laubscher reports back having spent the first week on Farquhar with his team of guides and the first guests of the season.

Being a FlyCastaway guide means that you are part of a team of dedicated professionals who share a common passion; fly fishing and guiding. 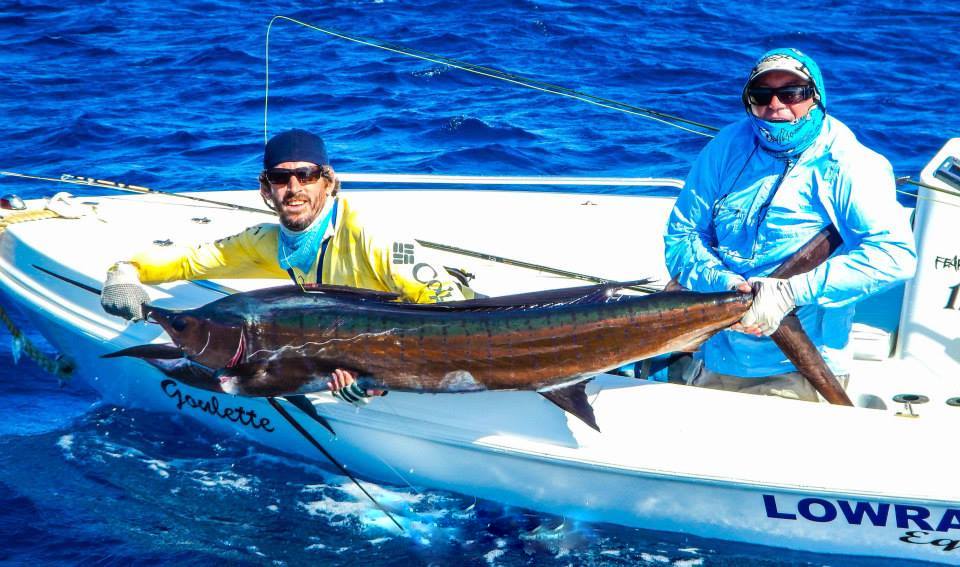 Being on location with the boys is one of the highlights of the job but contrary to popular belief we never get a chance to fish together as a team. Logistical challenges and busy work schedules simply prevent us from doing it, so when the opportunity presented itself the day before our Farquhar season officially kicked off we grabbed it with both hands. It wasn’t a full day, not even a full session, more like an hour and a half. Diligent preparation in the months leading up to the season meant that we were ready for our first guests with enough time to squeeze in a late afternoon sailfishing session with the rest of the guide team…and what a session it turned out to be. We headed out on two boats, when the first boat arrived outside the atoll Brendan dropped a teaser overboard, Nick kicked the boat into gear and before Scotty even had a fly tied on the first sailfish was slashing away at the teaser. The fish was teased in, Scotty didn’t even have time to trim the tag end before casting at the fish and in textbook fashion she ate the fly and headed for the horizon. By the time James, Wesley and I arrived ready to start teasing we saw a beautiful sailfish jumping all over the place, literally not 5 minutes from leaving the guest house. Scotty landed the fish and I snapped a few pictures, spirits were high and we continued fishing. About 15 minutes later we had three very hot sailfish behind our boat and James hooked up, a quick fight ensued and the fish was landed, photographed and released. We were ecstatic, we hadn’t been fishing for 30 minutes and already we had landed two good sailfish! 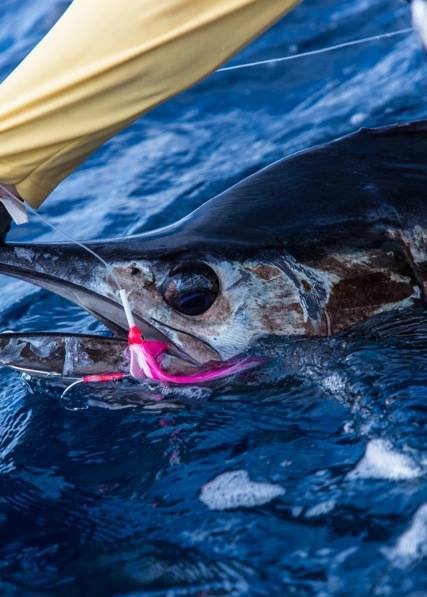 The teasers went back and we trolled around for another 15 minutes before one of the most amazing sights I had ever seen in the Seychelles unfolded in front of me. Out of nowhere we had a pack of between eight and ten sailfish behind the boat, slashing at the teaser. I hooked up to a fish that just stayed in the same place for about 45 seconds, thrashing around on the surface, it started running and the hook pulled, I was still on the fly line and could see other fish around the boat and just started retrieving, within seconds I had another hookup! The fish turned and started running away but the hook pulled. I brought the fly in and asked Wesley to cast the GT ice cream teaser again as I could still see sailfish around the boat. The teaser went out and two sailfish came in slashing at it, I made a cast and hooked up again! Fading light forced us to head back to the lodge, but the trend had been set for the week to follow. Boy oh boy if this was how things were starting what does the season hold for us? 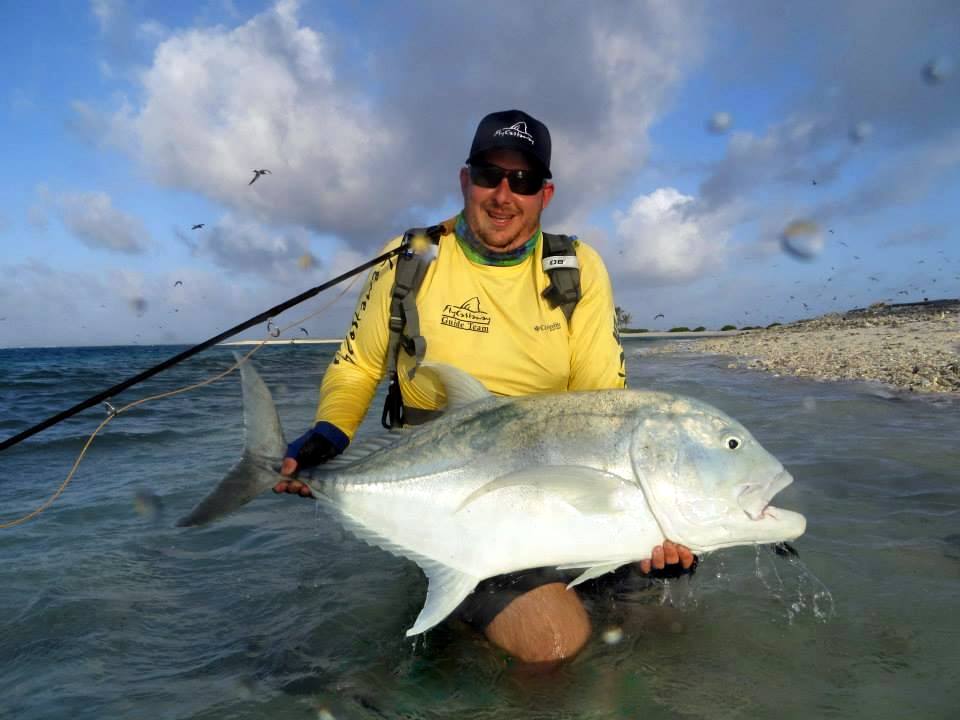 Day one dawned a bit breezy but the spirits were high and the teams went out. When we met back at the lodge at the end of the day I couldn’t believe what had happened! The guests on the week were inexperienced saltwater fly anglers yet the catch reports that came were very impressive. James guided John onto a GT of 114 cm, Andrew van Hasselt and Andrew Jillings landed a bunch of bonefish and a nice GT, but it was Nick who really had the best opening day of the season in the history of FlyCastaway. Dave Murray had never saltwater fly fished before which made the feat even more incredible considering he landed a Grand Slam on day one! Their morning started with some nice bonefish, then a 117cm GT and as if that wasn’t good enough he landed a permit of about 8lbs on the way back to the lodge. 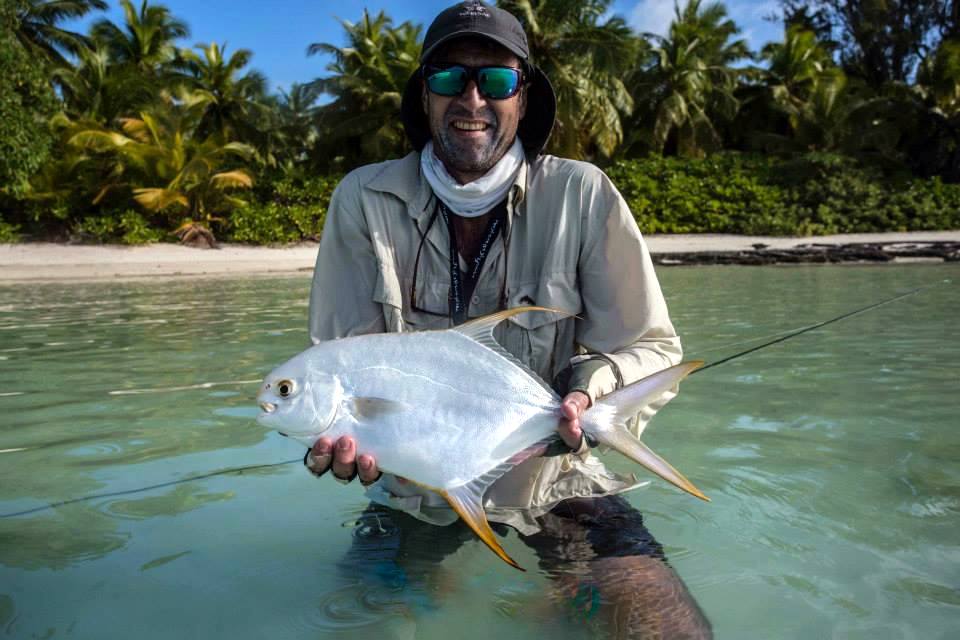 The rest of the week is a blur of fishing memories and moments shared amongst a very close group of friends that couldn’t have been scripted better. Tim Fleischer hooked three huge parrotfish but unfortunately didn’t succeed in landing any, his new nemesis. Hilton Petersen had his brand new 12# rod pulled in half by a massive GT, the tip section and half the fly line never to be seen again, he made up for it though, landing two beautiful sailfish on consecutive days. Andrew Jillings caught his lifelong dream, a trophy GT on the flats and Tim Andrews on his second day fly fishing ever caught a beautiful sailfish. 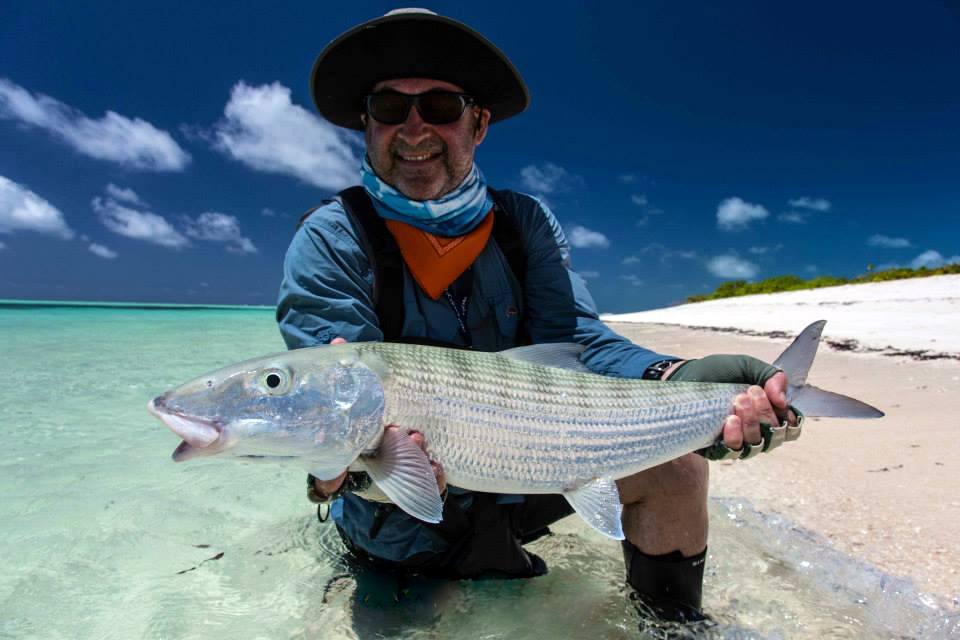 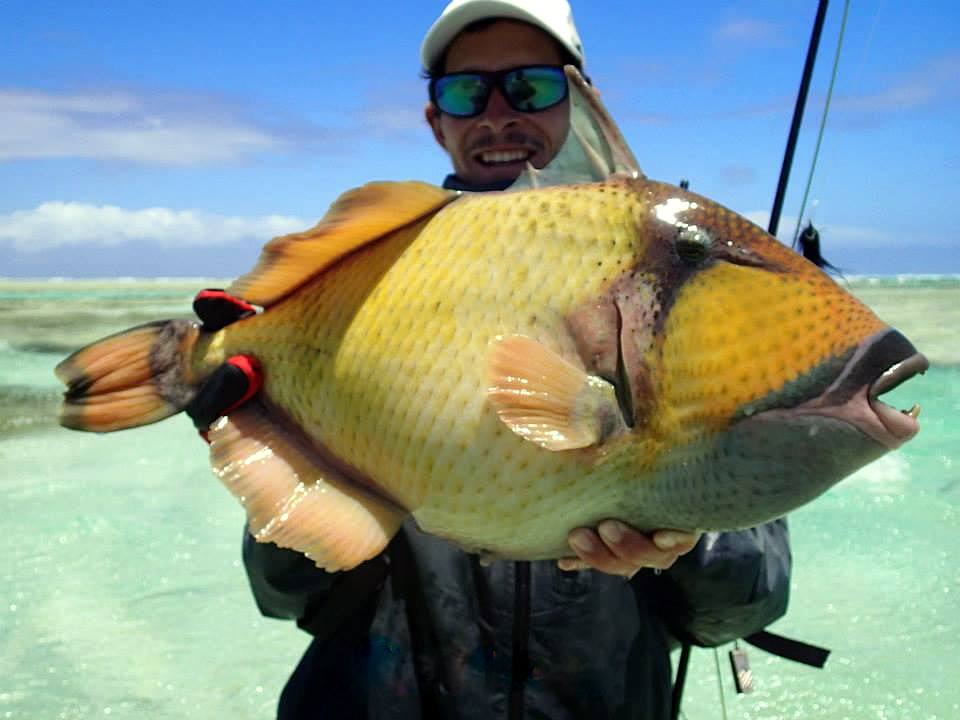 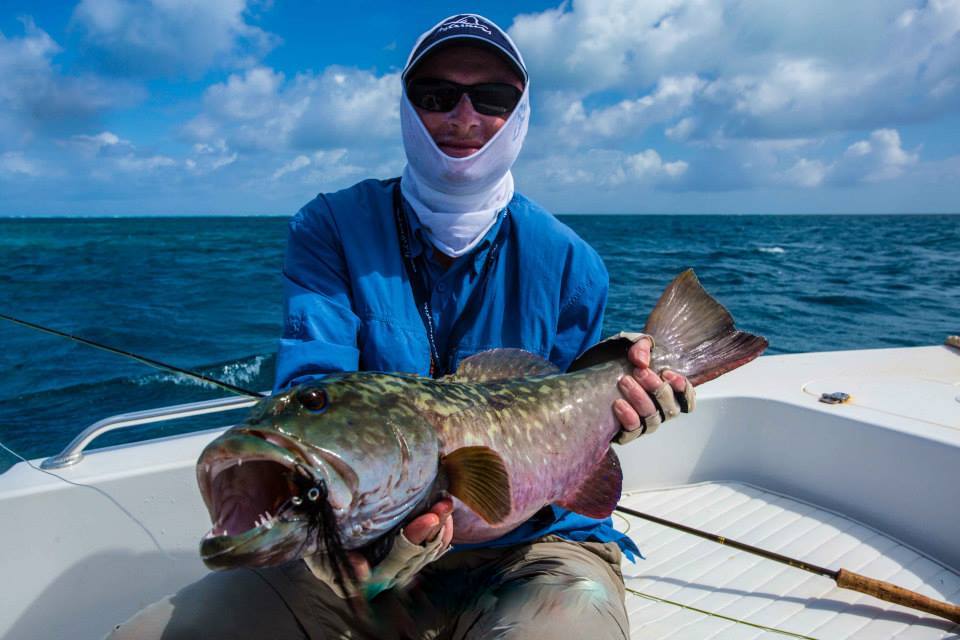 In between all of this they cast at some of the most exotic species on the planet, saw GT’s gorge themselves on birds, yes, the GT’s are eating the birds landing on the water! They caught a variety of groupers and reef dwelling species and landed scores of bonefish, lost a bunch of sailfish due to a broken tippet, hooks and fly lines yet still managed to land 6 in total. They experienced the full diversity of Farquhar and everything that makes this fishery so unique. It just proved once more that it is without a doubt the most diverse flat fishing destination in the Indian Ocean. We cannot wait to see what other amazing catches this coming season holds. 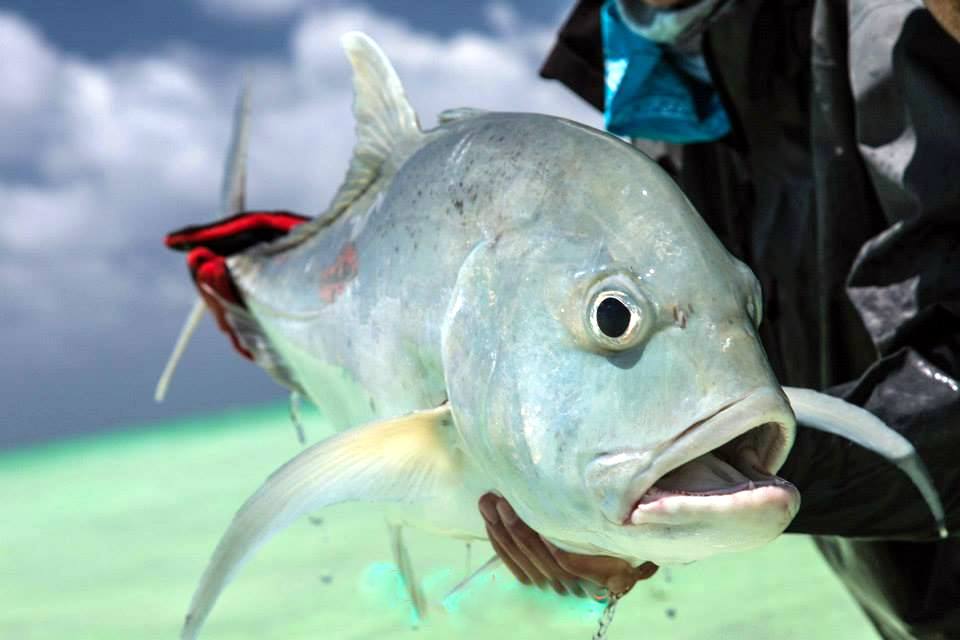