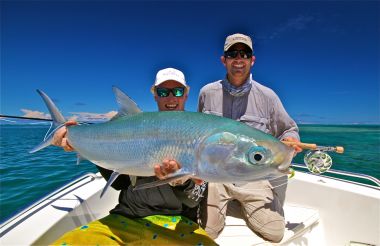 After two long weeks of working on boats it was a welcome relief to receive our guests this week. We knew things were looking good when on the first morning Jason Miller landed a trophy Triggerfish. Being a self confessed Permit nut he presented the crab to the Trigger with deadly accuracy time and time again. After a few dozen perfect casts the general feeling was that the fish wasn’t hungry, but Jason persisted and was rewarded by his first moustache triggerfish, and celebrated as if it was a 30 lbs permit. 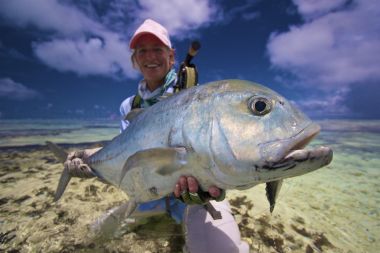 As the week progressed the fish tally rose drastically as it tends to do at Farquhar. It didn’t take long for stories of big fish to circulate around the particularly lively dinner table. Ben soon had a few GT stories to add to his previous season, two to be precise, one of 110cm! He didn’t stop there though. I’m not sure if he was keeping chum in his pocket, but he seemed to attract the big barracudas. One he was lucky enough to land without a wire trace, the second managed to bite through but only after a long and intense fight. 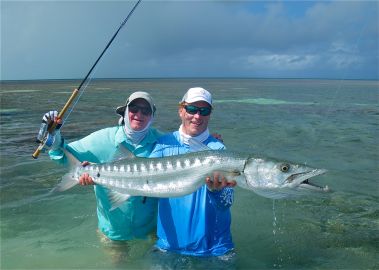 Sarah Davies landed her first GT, but only after she had practised her big fish skills on two large dogtooth tuna. Bob (a larger than life character and Woodstock veteran) was not to be out done, and managed to pick a Sailie out of a massive school of Bonito. In typical Sailfish fashion it went buck wild and then mysteriously the backing parted.  Two fisherman and their guide stood gaping open mouthed at the fish’s wake for several minutes.

We thought the week was going really well after we got two more Triggers and when Justin landed a 10 lbs 32 inch bonefish- certainly the biggest we’ve seen on this atoll- we thought it couldn’t get any better. We woke up on the last day of the trip to the most perfect conditions you could possibly hope for in the Seychelles. We knew something special was going to happen, and sure enough by 12 o’clock in the afternoon we had landed two beautiful Milkfish. A feat that most fly fisherman don’t reach in their deepest daydreams. The fight between fish and angler was a mammoth one, the fish weaving the boat through fields of coral gardens. Finally Jako sent the message that stated simply “boys, we have a milkfish on the boat”. Boy did we all go crazy! After everyone had jumped up and down and high fived we sent our congratulations to Jako and Jason as well as Jeremy (Jason’s brother, who gave moral support and helped steer the boat and man the radio while Jako had his hands full). Only a few minutes later Scotty came on the radio and said: “Where have you guys been?! Dipose was full of Milkies, Lan landed one first thing this morning!”. 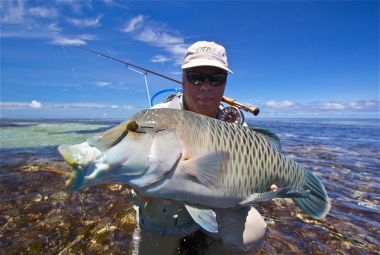 So the fishing on our first week was amazing, but it was only a portion of what made the week truly memorable. There was never a dull dinner, the stories flowed and laughter carried over the moonlit water in the bay. The guides would always walk back to the house after dinner saying amongst ourselves “Jees, what a lekker bunch of people” and we always meant it. We’ve made friends, and the group caught a whole ton of special fish – in the end, that’s what it’s all about, isn’t it? – Jako Lucas, Head Guide, Farquhar Atoll