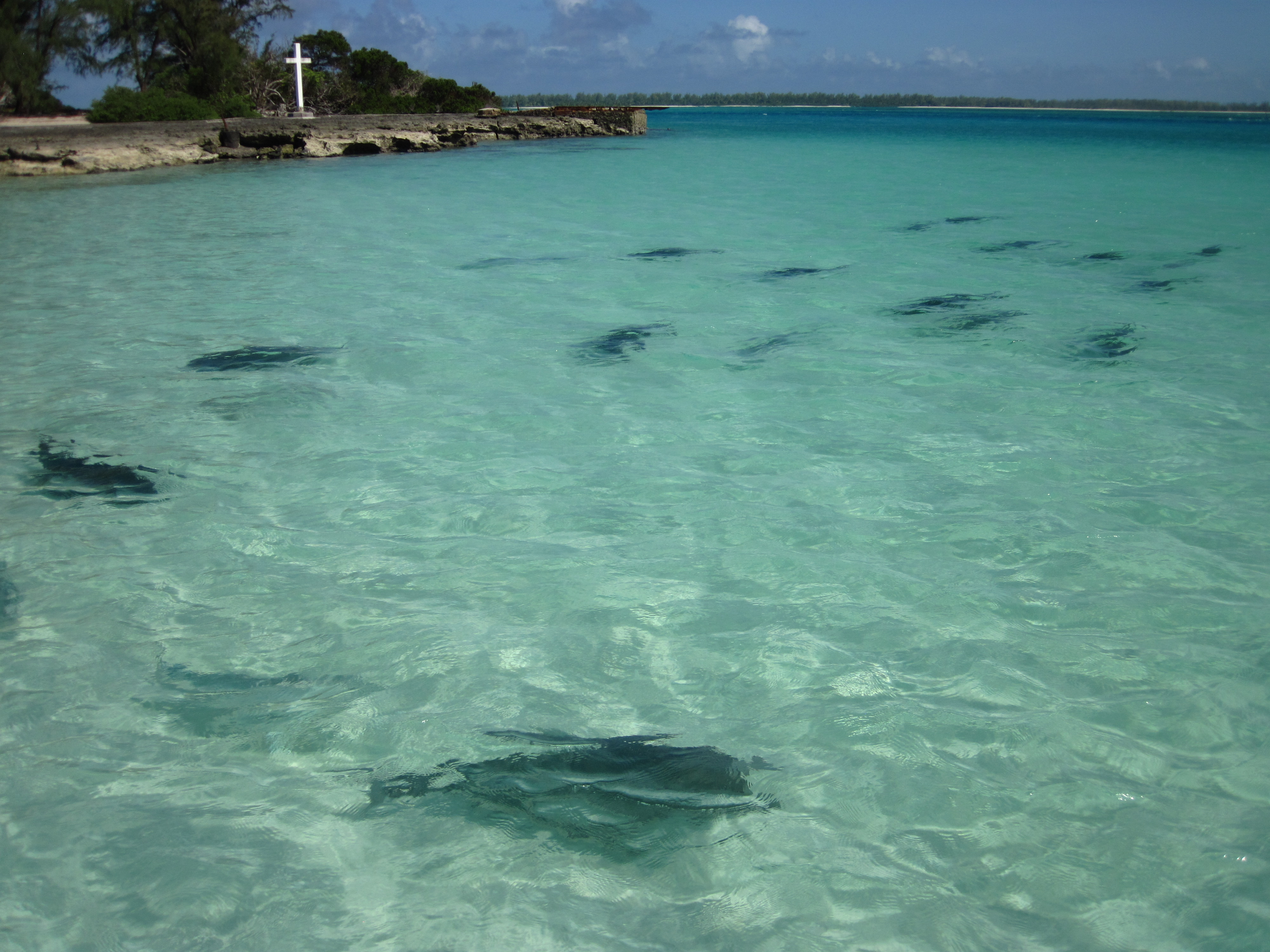 Farquhar Atoll remains one of the Indian Oceans’ top land based GT spots. There is something truly unique about the wide open turtle grass flats intersected by channels, the rocky islands, hard and flats and the bird eating GTs of Goulette. If you are looking to focus on wading for GTs and perhaps throw a bumphead parrot fish and some triggers into the mix then Farquhar should be at the top of your list. 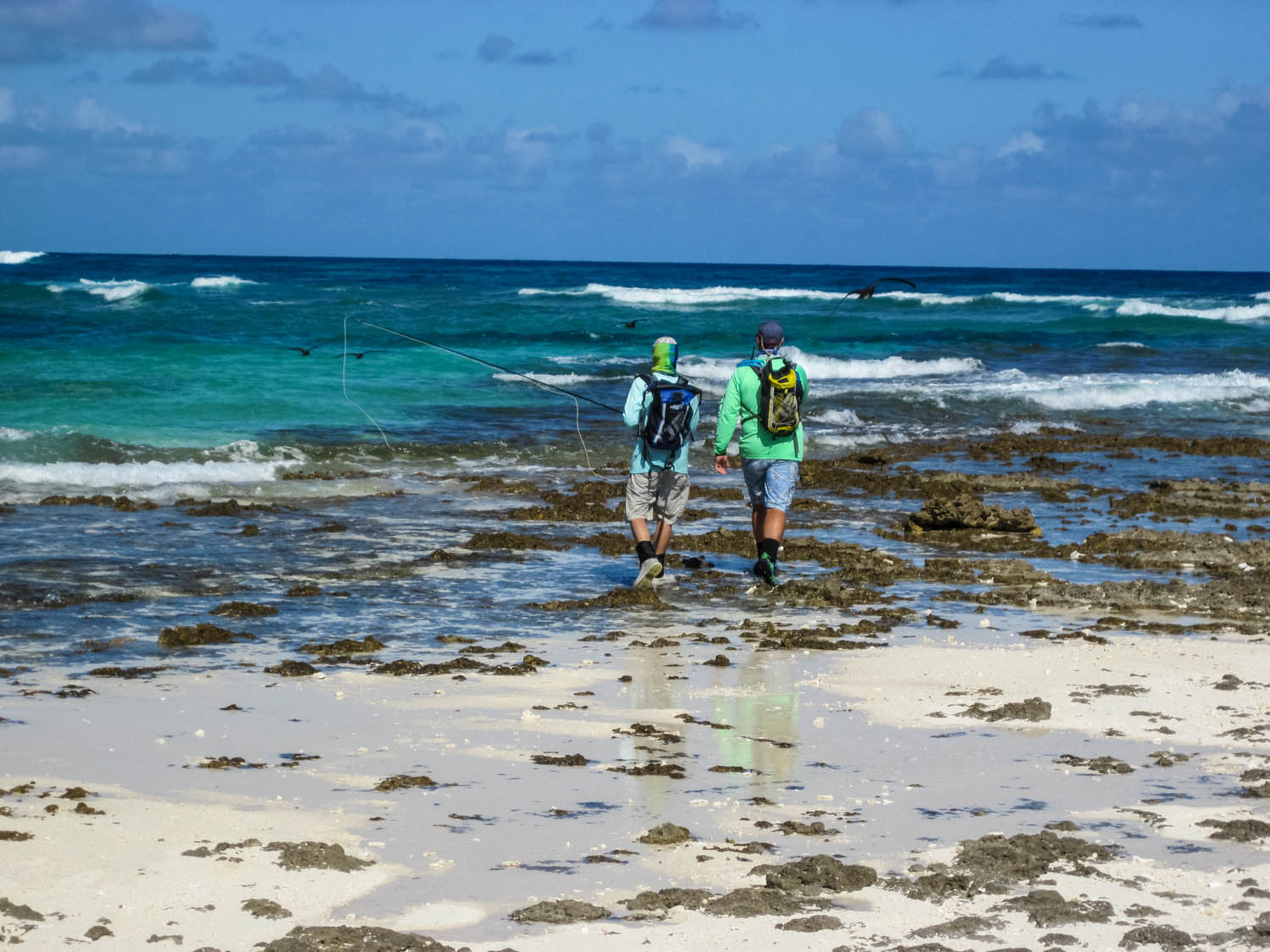 The isolated atoll of Farquhar in the Indian Ocean has been a favourite spot of mine for several years. At first I started going as I was looking for a land based GT fishery that I could go to while the outer islands were all shut down, but soon I began to love it for the wild fishing experiences I had there. Farquhar will challenge you as a fisherman, teach you a huge amount about giant trevally behaviour along with numerous other species and offer you some unique experiences not to be found anywhere else. Although the GTs may not be as numerous as Cosmoledo, Astove or Providence, I have always seen some of the largest specimens here. It is a technical fishery and under the expert tutelage of the guides the results can be hugely rewarding. 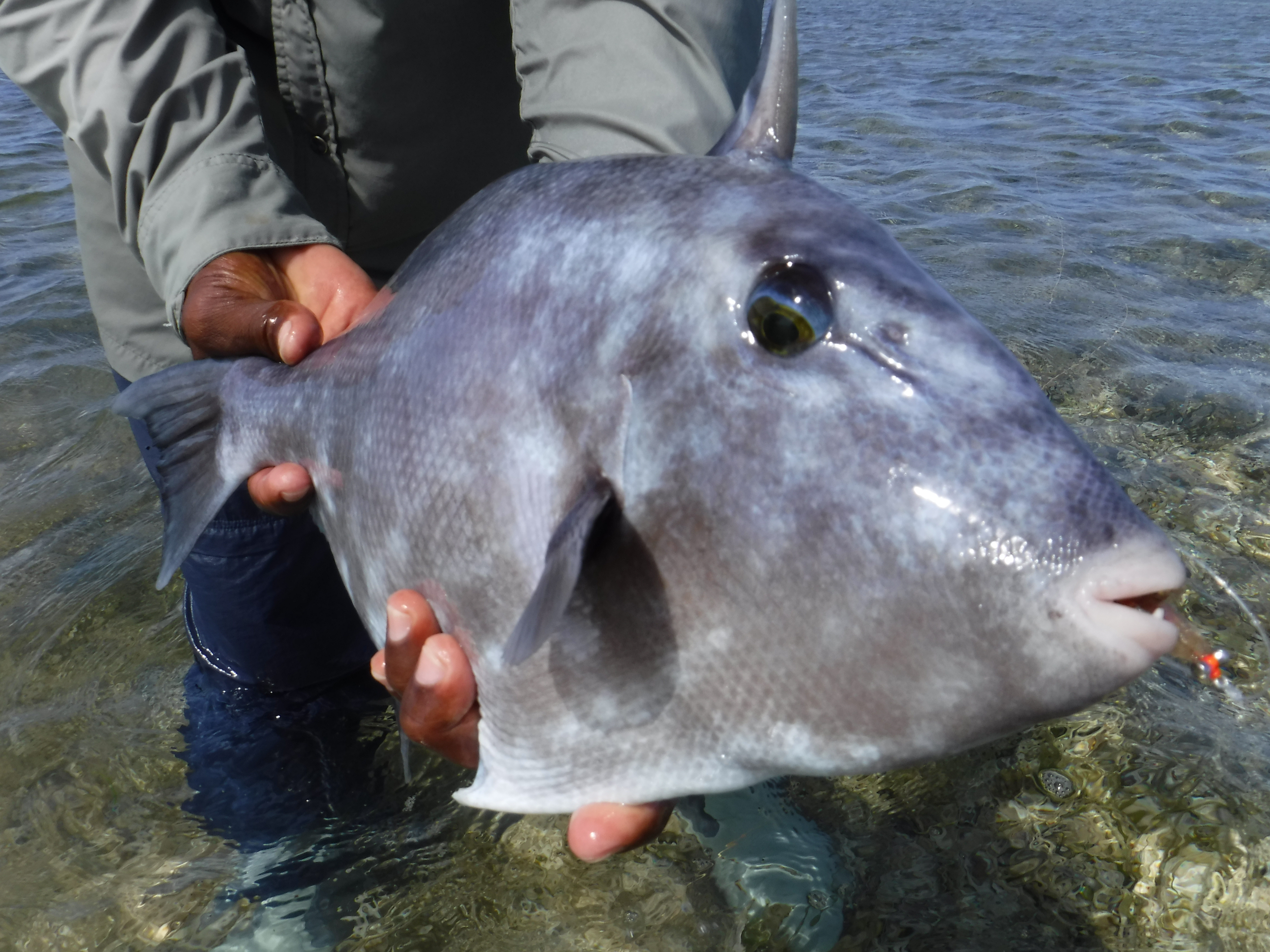 When I think back I remember an instance that even now keeps me awake. I had waded out from Depose Island and there was not much going on as we came off the edge. Three of us came to the “three lines of defence”. Three strips of turtle grass coloured coral heads that made perfect watch towers across rollers. It does not get any more perfect. As we neared the reef, Scotty pointed out a shark in the waves and sent me off in hot pursuit while he and Jules made their way to the edge. Everywhere you looked were the tails of surgeon fish feeding on the crustaceans in the turtle grass. I was scanning for the shark hoping he might have a friend tagging along when I saw Scotty pointing and yelling as he launched a bewildered Jules through the surf to the outer edge. Sometimes I could only make out their caps and back packs festooned with rods bobbing in between the coral heads. Finally they made it up onto the outer heads and Jules began casting frantically before dropping the fly and almost immediately lifting into a fish. 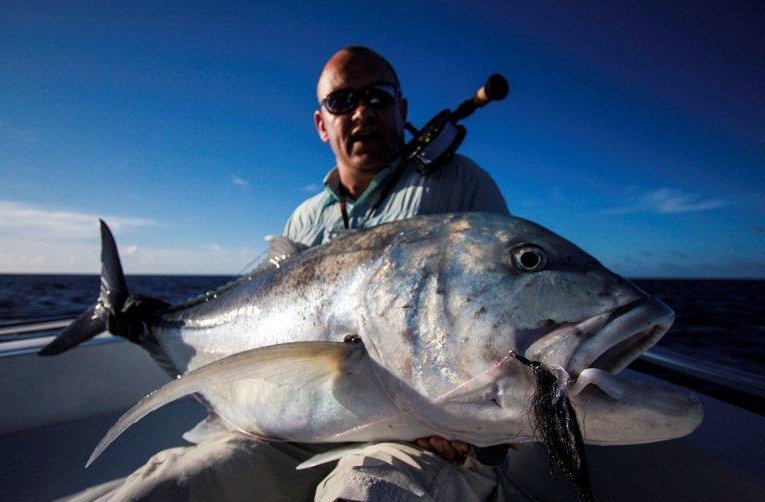 While this had been taking place I too had been making my way to the edge, albeit the coral heads I was standing on where nearer the flat than theirs. In front of me I could see the waves lift as I scanned for movement. I kept an eye on the battle happening, but just then out of the corner of my vision a dark shape lumbered into view. My first instinct was that it was a large ray, and there might be a fish riding shotgun. As it got closer I suddenly realized that the whole dark object was one massive GT. I quickly began stripping off line, popped the 6/0 poodle out of the ring and began to wave it around my head like some kind of demented conjurer. I slapped the fly down in front of the fish and it turned towards it, very casually and decided to follow although it looked like the beast barely cared. It ambled passively behind the fly as I gave it long strips. Suddenly it was if a light bulb come on inside its head, it suddenly identified the floaty thing in front of it as food. The fish accelerated into attack mode, pectoral fins out, mouth agape as it charged through the surf towards me. I took several involuntary steps backwards as this massive fish smacked into my coral bommie, so large it could only manage to rest its chin on the edge as it tried to smash the fly. I can only assume that beaching itself like some disorientated pilot whale made the fish forget its snack and spook in a massive fountain of spray as I stood there contemplating whether it was after the fly …or me. Either way the exchange was over and I was left somewhat disoriented. To this day that encounter still haunts me. 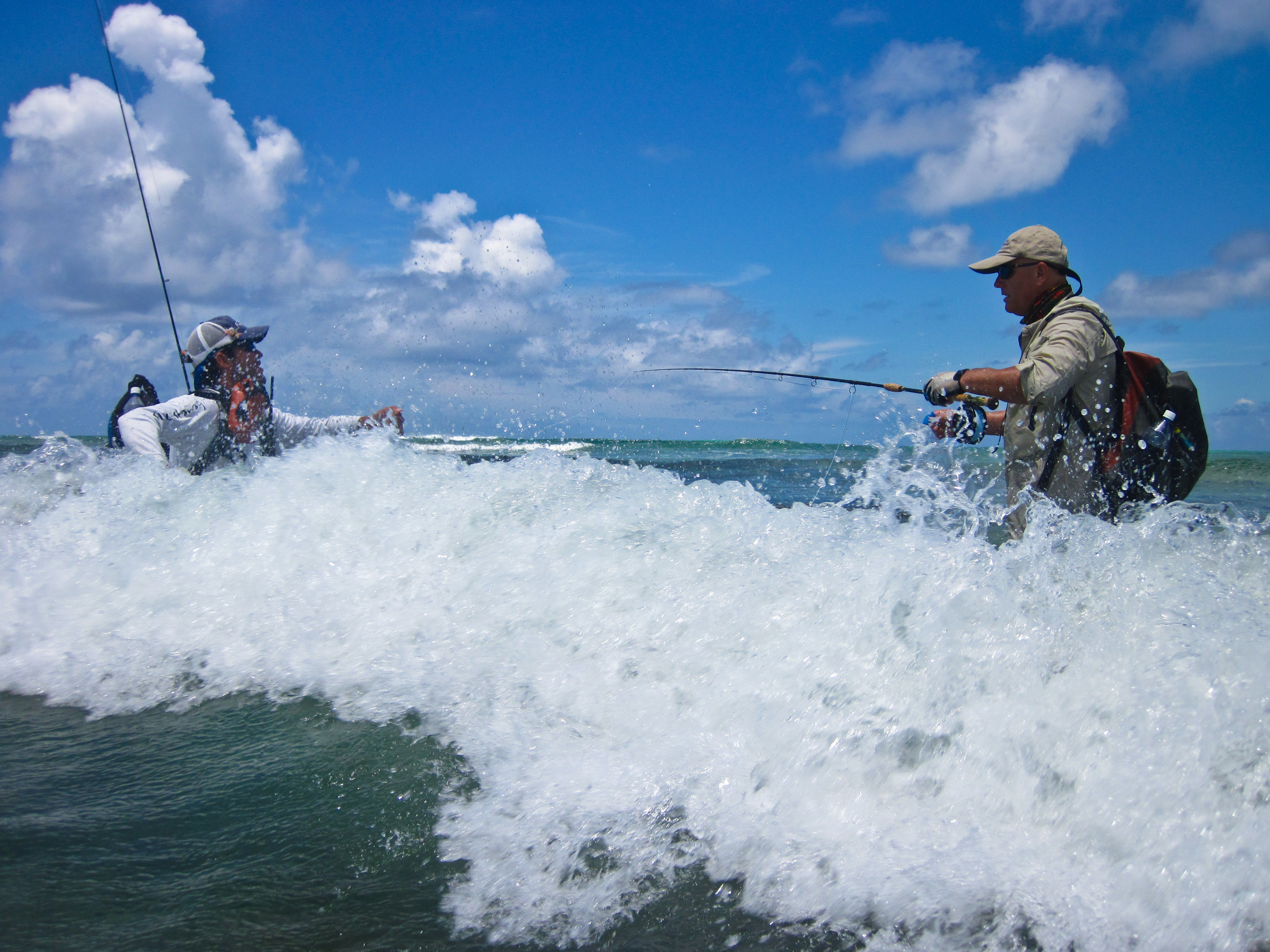 Farquhar is by no means for everyone and if you are thinking that catching GTs in the fly is relatively easy, it is not. You need to hunt them in their own environment and understand what motivates them to put yourself into the right place at the right time to maximise your chances. We saw a huge number of fish over the course of that week, but it was not always possible to present a fly.  It is a wild fishery which changes on a daily basis, and hunting big GTs around this atoll will teach you a huge amount about how they behave, some of the idiosyncrasies they display and why I have grown to love them so much. It is a technical fishery and the more you put in the more you will get out. I also know of few places that can offer the species variety including the truly unique bumphead parrot fishery and an excellent bluewater fishery 300 yards from the flats.

For more information on Farquhar Atoll or to check availability for next season please contact Peter McLeod or call +44 1980 847389.