A closed group of 10 avid fly fishermen from the US joined the FlyCastaway guide team on Farquhar this week. Being the first week of full neap tides for the season, we were excited to fish some areas of the atoll that traditionally work nicely during these conditions. It was also made clear to us from the get go that Farquhar’s notorious Bumphead Parrotfish together with the atoll’s undisputed king of flats, the Giant Trevally, would be our major focus for the 6 days of fishing. So when the father and son team of Eric and Dave both managed to land two Bumpies on their first day, we had high hopes for the rest of the group. 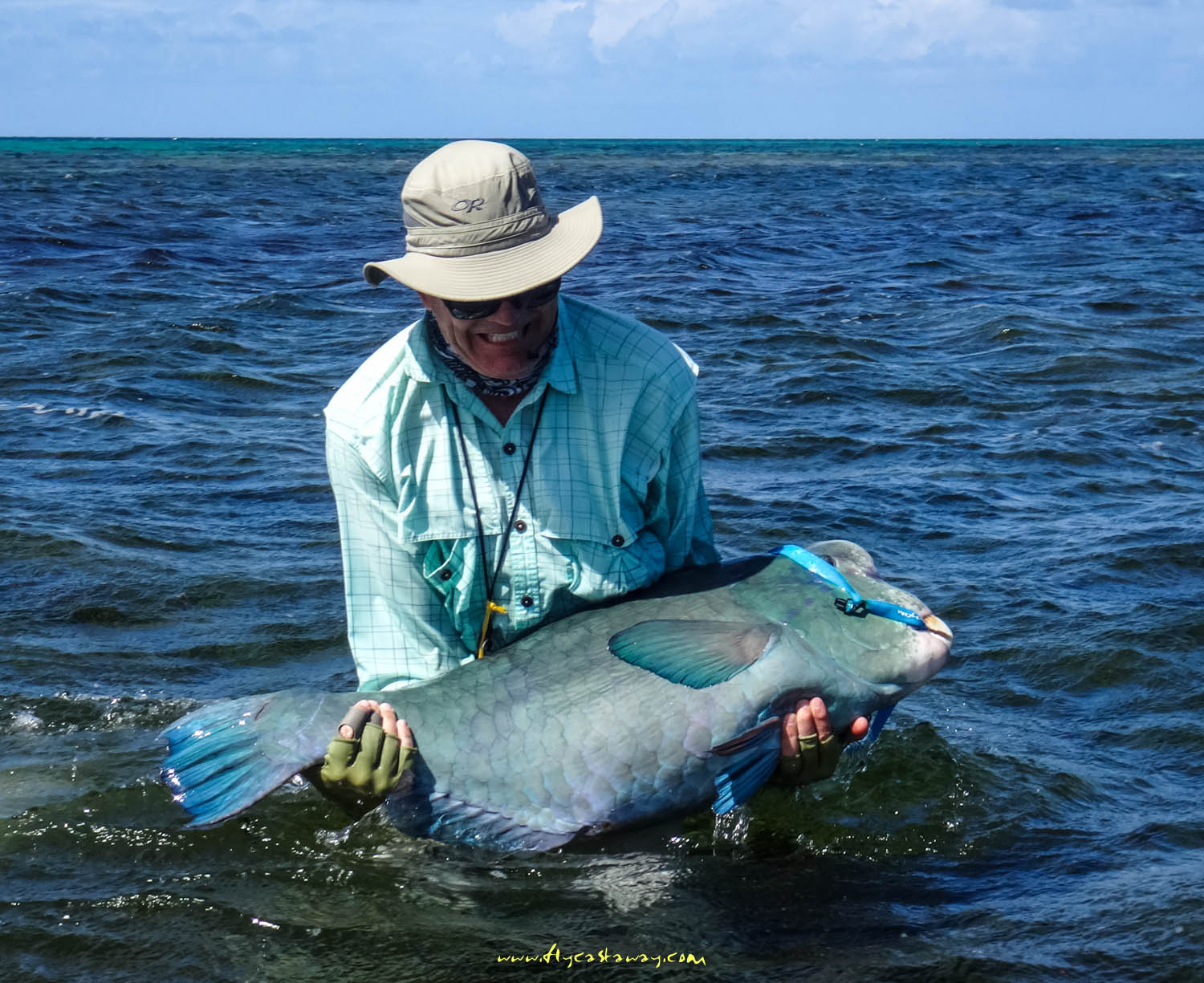 The week of firsts continued when Eric hooked and landed our first Yellow Margin Trigger for the season. The Moustache Triggers have been around in really good numbers but for whatever reason our pale yellow friends had eluded us to this point. Craig also managed to land the first Permit for the season, not a massive fish but a Permit nonetheless. Tony was next in line and came to the party in big way by landing our first Sailfish on fly for the season. There was no stopping the chaps now and when Craig continued his good form by flicking a Velcro Crab at a school of Golden Trevally tailing feveris hly over a turtle grass flat, he hooked and landed our first Golden Trevally for the season. As so often happens the second was not far away, with Craig’s second Golden Trevally really putting his 9wt outfit to test. Craig’s partner Tony also boated a great Golden after being kept busy for almost 30 mins. Eager to join in on the action, Dave hooked our 4th Golden for the day. The following day Andrew landed two more Golden’s, one of which weighed 23 lb….a real monster! This brought our tally of Golden’s to 6 for the week and proves yet again why Farquhar’s diversity is going to be difficult to match. 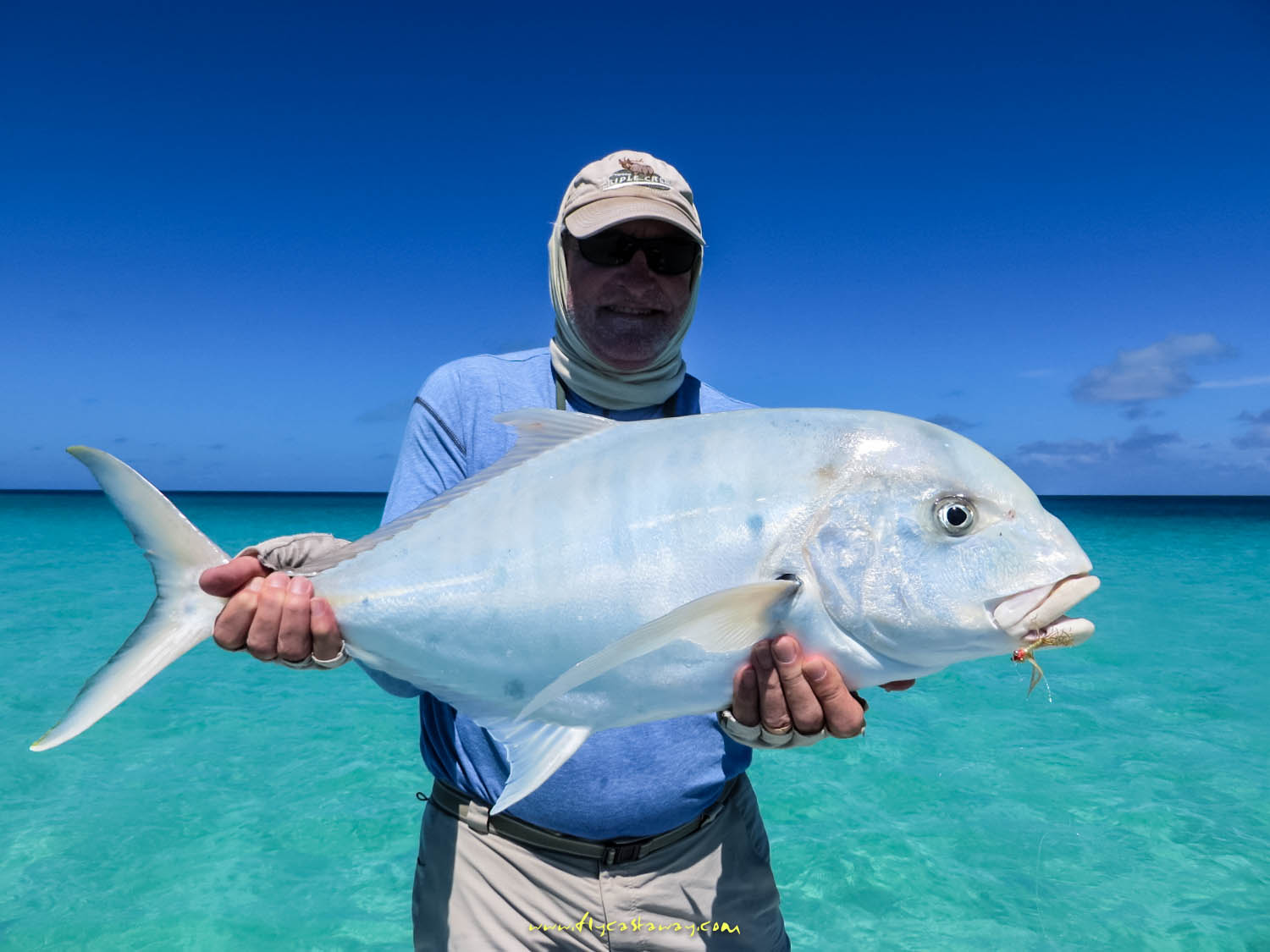 Given the tides for the fourth day it was decided that our beach barbecue would be held at ‘Hotel Royale’. The anglers then decided to put us guides to the test by saying that if 10 quality fish were not landed by the time we all reached the barbecue, the wine bill for the evening would be billed to the guides. Game on!!! The outcome was for us was less than ideal as we should have clarified which species constituted quality before accepting the bet. In any event it was good humour. On the GT front, we GT front we were dealing with some unusually high water for this sort of tide. We were thus forced away from our traditionally walk and stalk and focused our efforts by drifting and cruising the likely entry and departure points. This in itself is an exciting way to fish, more along the lines of searching for Tarpon in Florida Keys. Robert drew first blood by landing a good size GT on the first day, which he followed up with a further three during the course of his stay with us. Dave kept up the good form by landing a 96 cm GT (the biggest for the week), followed up with a further two more fish later during the week. 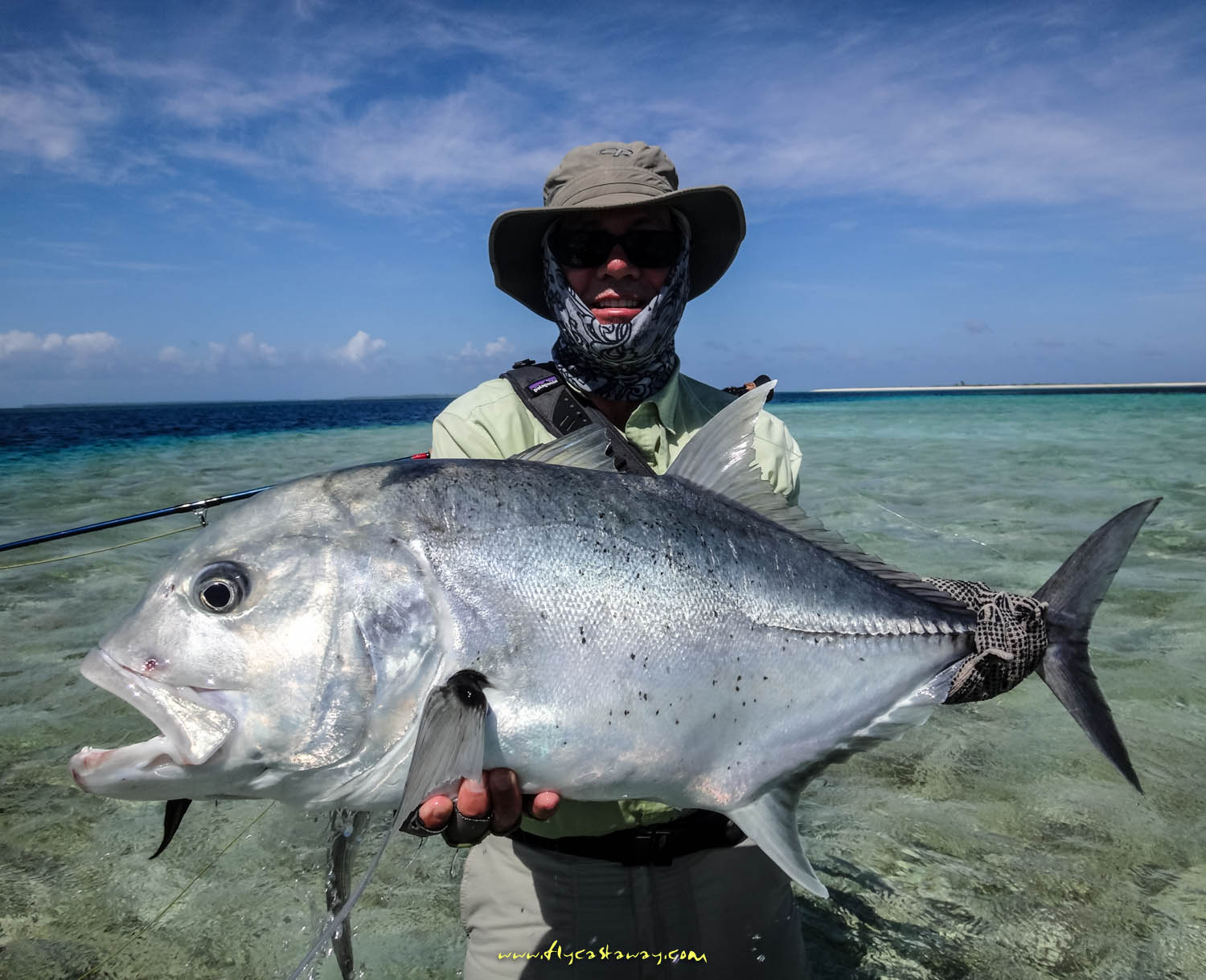 Craig added to his Trevally tally with another two GT’s, whilst Jeff, Andrew and Eric each landed a single fish. This brought our GT count up to a total of 12 GT’s for the week, which under the circumstances was a job well done. Other notable fishing encountered included good numbers of Seychelles’ Bonefish as well as a myriad of reef fish, all of which kept our anglers rods bent and their reels working hard. Looking back it was a fairly tough week on the GT and Bumpie front. No doubt the unusually high water over our neap tides playing a part. Despite this we enjoyed sharing this unique atoll with our new friends and if one considers the Bumpies, GTs, Triggers, Bones and lets not forget the Goldens we encountered there were some pretty memorable fish landed. Until next week Wesley & the Farquhar Guide Team