Our fourth week on Farquhar Atoll had arrived and with it a terrific group of people from all over the globe, including guests from Italy, the USA, the UK as well as Norway. Although Rob and Dennis have fished with us on multiple occasions, the rest of the team would be setting foot on Farquhar’s flats for the first time and we were champing at the bit to spend some memorable moments out on the water with them. 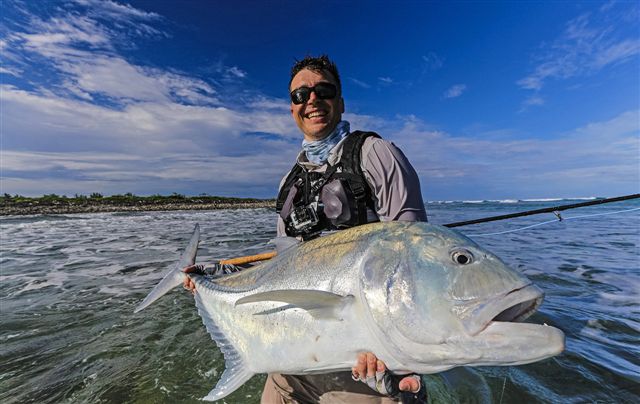 Head guide James Topham set the tone for the week (amidst some pretty inclement weather) by having both his clients buckling down their drags with some great fish on Day 1. Luca landed his first bumphead parrotfish and Stefano landed our first GT over a metre for the season with a gorgeous fish of 110 cm.  Well done gents! Other notables on day one included a nice napoleon wrasse and bluefin trevally by Terry Carter, whilst Simon and Geoff had countless shots at triggers on their first day out. Sadly however Lady Luck seemed to have gone AWOL with a great walk and stake only ending up with one trigger dragging us into the coral. 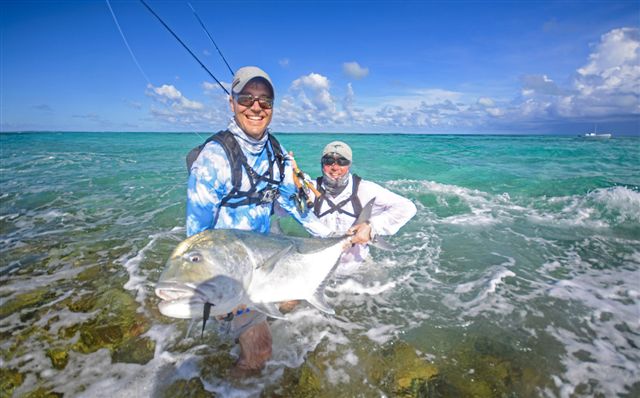 Day 2 and the inclement weather sadly continued, making sighting fish pretty tough to say the least. Not to let this dampen his spirits, Stefano showed some classy angling by landing his second GT over a meter in two days. This in itself is special, but to do it with a fish of …wait for it…. 131 cm, is just real Big Match Temperament. Congratulations Stefano, that is a fish of a lifetime! The smiles beamed from ear to ear as he and his extremely proud guide Kyle Reed stepped off the boat later that evening and rightly so. Rob and Dennis spent most of the day offshore and did some damage of their own, Rob landing a 112 cm and a 126 cm GT. Dennis not to be outdone was nearly pulled over board by a brute of fish, which later emerged as an enormous 80 kg dogtooth tuna. Great fish guys, nobody deserves them more! 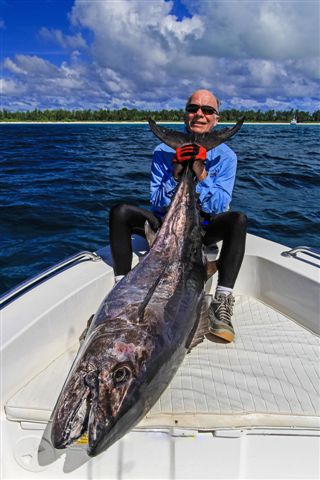 Days 3, 4 & 5 were in truth really tough going, as the weather just would not give us a break. Unseasonal squalls, coupled with strong winds made sight fishing almost impossible. The group however, to their credit, did not let the conditions affect their mood and persevered manfully. Thanks to their efforts we did land two very impressive fish during the tough conditions, one being 112 cm GT landed offshore as well as a monster size moustache triggerfish which Stefano picked up on “Home Flat”. 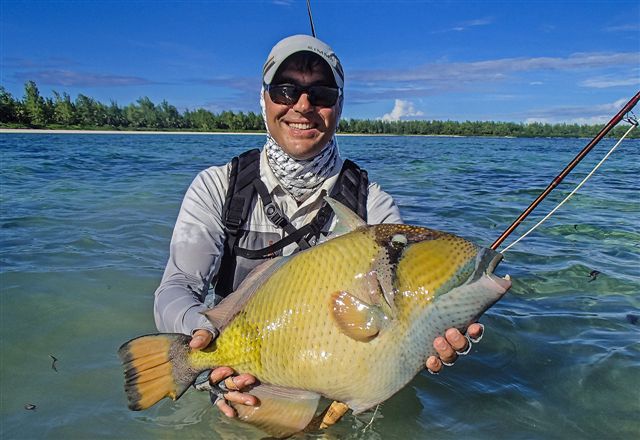 Waking up on the 6th and final day, it was clear there would be no respite from the weather gods. The sky was dark, and with some thunder and lightning around the guides made the call to hang around camp for a while. The month of March traditionally offers terrific weather here on Farquhar, with blue skies and a light breeze being the norm. But this is fishing and weather is just one of those things nobody has control over no matter how much you want to. Thankfully however we were only delayed a short while, the storm passed and we headed out on the flats at 9am. The light and glare made spotting fish a challenge but it was still better to be out fishing then stuck back at the guest-house. Josh persevered through the conditions, and after a good shot at a permit went a begging, he made a nice cast to a tailing trigger that jumped on top of his fly. 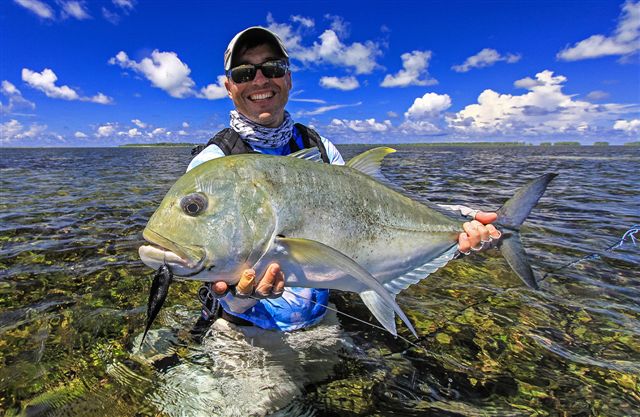 This sadly concluded a pretty tough week here on Farquhar, with the weather certainly not doing us any favors. And despite the foul weather, Farquhar still managed to show our guests glimpses of what she is capable of producing. With very little light and the barometer behaving like a yo-yo throughout the week, we still managed a handful of GT’s on the flats, including two over a meter (110 cm & 131 cm), one bumpy, two really nice triggerfish, some bluefin trevally and mix of other cool flats species. Offshore wise we landed twenty GT’s and two dogtooth tuna, together with some pretty cool snapper and grouper species. 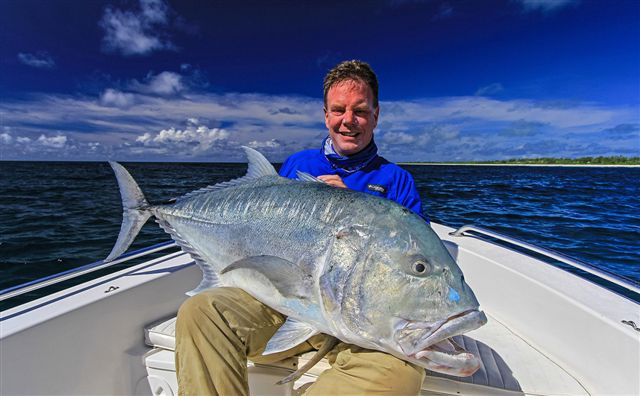 In closing, we would like to thank each and every guest on the week for their incredible attitude towards the trip. It was probably one of the toughest weather weeks any of the guides can remember, but despite this we still thoroughly enjoyed every minute with each of you. We hope to see you all on the water again soon (this time with some of Seychelles’ finest weather).

Brad and the Farquhar guide team