This week we welcomed our second group of guests for the season. Some of them have been to Farquhar on multiple occasions. Some would be new friends…either way they were all geared up and eager to be to be stretched. 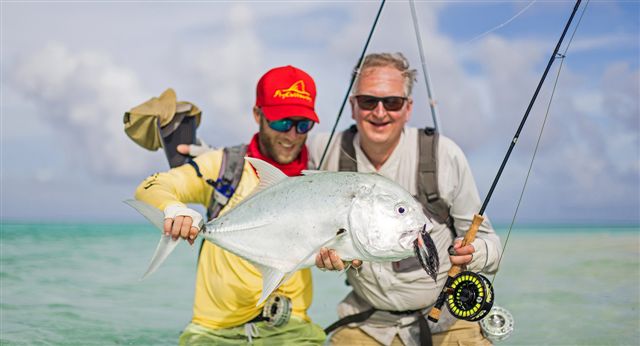 First day out and Ben showed his experience by landing our first GT of the week. Dotty, who was out to chase some records then proceeded to land a bluefin trevally which will be nominated for a new world record. Well done! Jim too got into the swing of things early by landing a nice trigger. We were off to a good start!

Day 2 and Ben was at it again landing his second GT for the trip in as many days. On the same flat Fred and Penelope each got a tricky and colorful napoleon wrasse, whilst Perk Perkins had no problem in dishing out some justice of his own with the 12 wt subsequently landing three GTs before the sun sank below the horizon. Laurie proved she was up for it too when she landed a bus bluefin trevally. 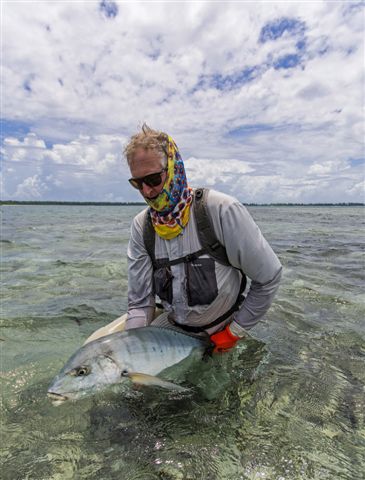 Day 3 and Laurie continued where she had left off by landed her first ever GT. Perk then enticed a blacktip reef shark to his fly and had it on the beach in no time. Later that day Dotty hooked a milkfish on the flats but after a short run it broke her off on some coral. What a shame…hooking these fish on a flat is just the most insane rush. Fritz then added to our GT count, whilst Ben continued to increase our species list with a quality sized golden trevally. The rest of the day was made up of bluefin, bones and chasing permit….pretty cool day to say the least.

On the fourth day, all the ladies decided to do a bit of walk, one which we call Paris to Dakar….it’s a bit of stroll but there is nothing these ladies can’t do. A 8km walk along the surf with endless opportunities at all kinds of creatures cruising the shoreline…it was worth it considering the cool fishing and overall fun was had by them and their guides. Meanwhile the gents were out looking for some GT’s, with Jim obliging and sneaking our tally up by one. 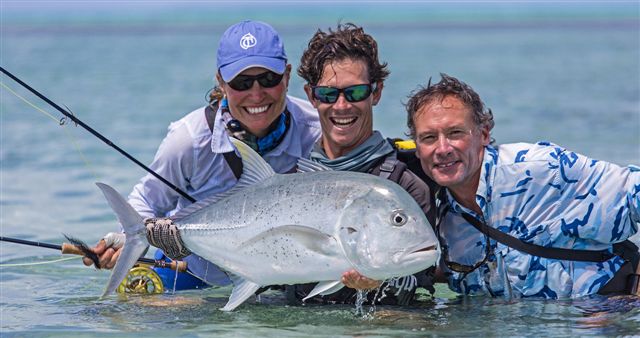 The fifth day out and sadly we had some tough weather to deal with. Rain made it challenging to say the least, and so most of the group opted to head back to a warm shower and hot cup of tea. Fred did however manage to catch the first lionfish on fly that we have ever heard about! 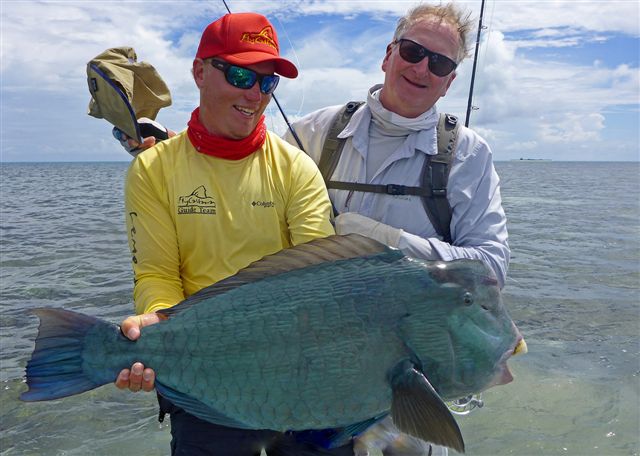 Thankfully the weather improved for our last day and Head Guide James decided he needed another long stroll for the week. This turned out to be quite productive decision, with Perk and Laurie both bagging another GT. On the other side of the atoll Penelope got a good bluefin trevally and when they headed offshore to take a look, BANG up came our friend the dogtooth tuna. Fred joined in shortly after with a nice GT and another doggie. On the flats Ben eventually landed our first bumpy for the week after a week full of break offs etc. Fitz then showed his experience (he is a legend in the tarpon fraternity) as to how hard you can actually pull a good size GT…on a 9wt to boot.

But our last day was not done just yet. Not by along shot! Tim had opted to take Peter and Steve offshore. What ensued will be hard for those anglers to forget for sure. yellowfin tuna, wahoo, rainbow runners and to top it off even a brief encounter with a black marlin, it was crazy. They then headed back to the flats and Peter landed a young but gorgeous Farquhar permit, our second for the season! 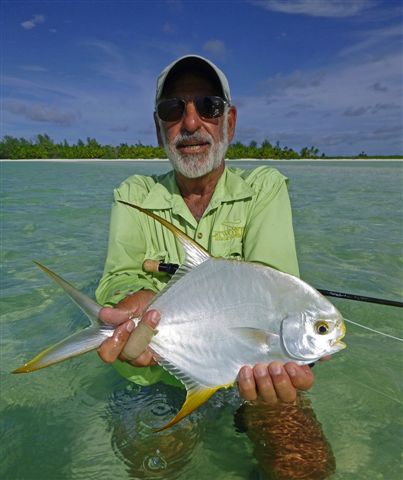 With week two under the belt it was time to take stock. We landed 12 GT’s, a big golden trevally, a bumpy, two napoleons, a permit, bluefin trevally, a multitude of grouper and snapper, yellowfin tuna, rainbow runners, doggies, as well as lionfish and a potential new world record summed up the week. In total 43 species were landed, simply emphasizing the amazing diversity Farquhar has to offer. To our group, thank you for a super week……we had a truly great time sharing Farquhar with you.

Until the next trip

Brad and the Farquhar Guide Team