We look back on one of the last weeks of fishing on Farquhar Atoll in the Indian Ocean, 24 November – 1 December 2012 and we can’t wait for the 2013 season to get underway in March… 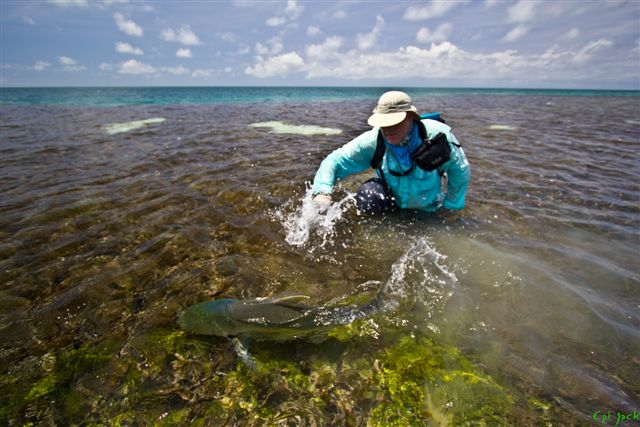 At 9 o’clock in the morning on the first day a shark ambled across the path of a fly fisherman and his guide. There was a black smudge 10 ft behind the shark. The fly fisherman cast the 12 wt line with a large black brush fly attached to the end of 130 lb fluorocarbon. The 12 wt is heavy and unfamiliar, and the cast lands short, very short. The fish flinches momentarily, but then continues to swim in the sharks wake. The fish is has now passed their right angles, and they begin to chase the fish down. Heading north along the shallow water flat fringed with white sand and palms is a large black tip shark, a GT, a fly fisherman and his guide. The guide keeps telling the fisherman to quicken his pace. The fish is slowly slipping out of casting range. The guide splashes the water by his side and the GT turns to investigate the commotion. “Now! Cast now!” the guide yells. The second cast lands perfectly in front of the fish. The fish takes off like an F16 off an aircraft carrier. “Strip strip strip!” the guide yells. The fish planes along the surface of the water and its gaping mouth snaps over the fly audibly. The fish turns and yanks the rod straight. It won’t stop running for the next 150 yards. To make sure the fish doesn’t get into the coral, the guide cranks the drag on his clients reel. The full drag doesn’t slow the fish, but it nearly pulls the fisherman off his feet, and he has to take a few hurried steps forward to recover. Eventually the GT does a somersault and the battle is over. After photographs the fish is released with much back slapping hand shaking. It’s the fisherman’s first saltwater fish on fly. “Second cast on the first morning” the guide grins “it’s going to be a good week!” 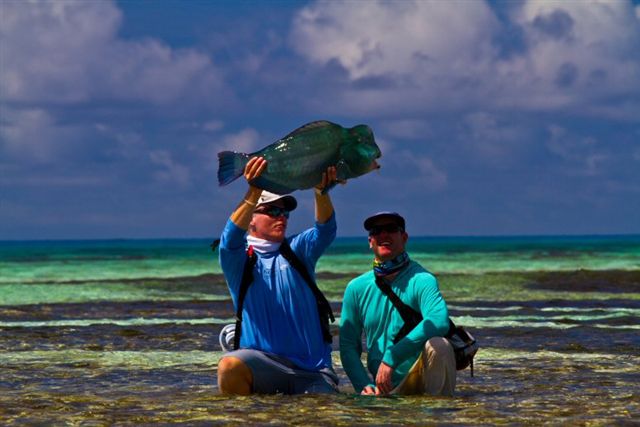 A Good week it was! The action didn’t stop there. Many of the guys wanted to pursue bumpies, so a few days were dedicated to “the water buffalo”. Being a big game hunter of the old school, Simon Rogers naturally gravitated towards the quite stalking and targeting large “animals” in great “herds”. Unfortunately, after being bitten off a few times, and on one occasion losing a fish after half an hour Simon decided it might be time to move on to some other game. I’m sure after losing some of those fish he wished he had his 458 at hand. 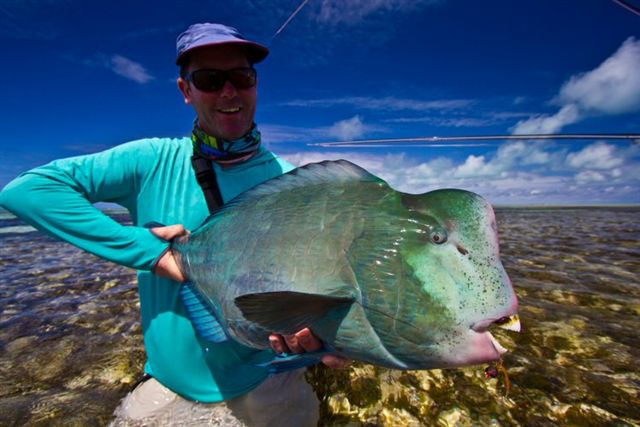 Mike Harker & Tim Hammond managed two fine specimens of this large, powerful and somewhat peculiar fish. They can be proud to join a club of very few fly fisherman in the world to have caught such a brute. 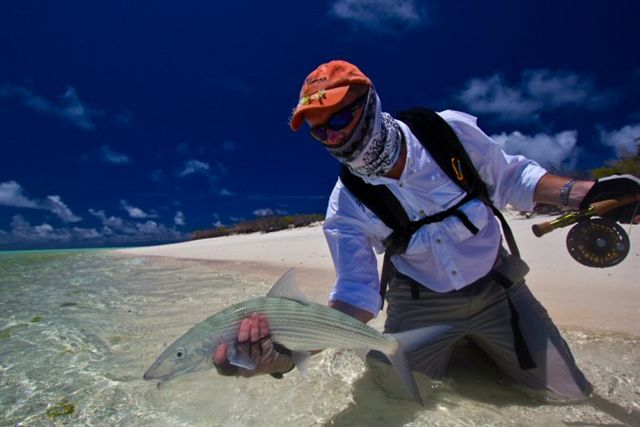 Many world class bones were also caught this week. A St Brandon’s sized amount of Bones moved into the atoll and we have quite a few pictures where all four clients plus a guide or two are lifting fish from the net. There were also some beautiful singles taken, and after a week or to of being scarce and very picky it was great to get a few solid Bonefish sessions under our belt. 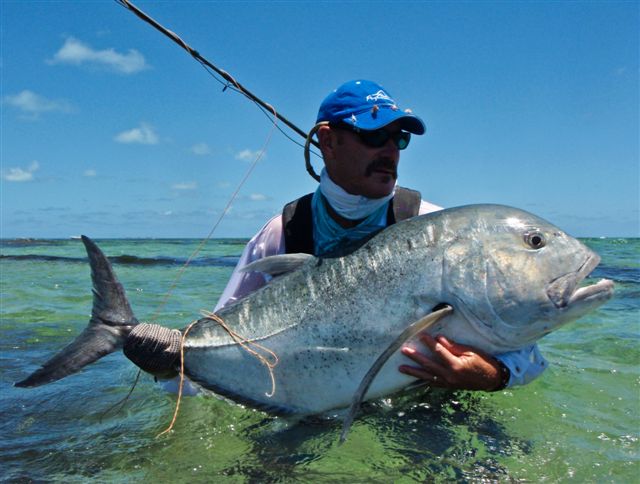 The GT mentioned at the beginning of this entry may have been the first, but it certainly wasn’t the last. Although not around in huge numbers, everyone managed to get their fish one way or another. Simon Rodgers, after his frustrating Bumpie experience compensated by catching the largest fly caught GT ever at Farquhar. I’m going to say that again: the biggest GT on fly we’ve ever landed at Farquhar. As if that’s not impressive enough, the fish was caught on the flats, and was landed without the assistance of the boat. Only a handful of fish of that calibre have been landed without assistance in the Indian Ocean. It truly was a wonderful occasion, one I’m sure Simon or his guide Warren Deysel will never forget. Somehow, everyone knew about the fish before we had returned to the lodge that evening. “Bush telegraph” I guess…

Until next season!
James Topham 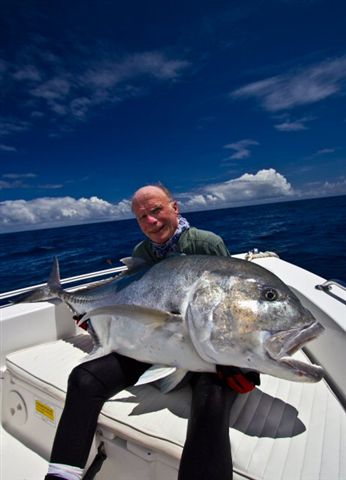