Continuing on from last weeks blog about our personal favourite destinations this week it is Peter’s turn:

Two most loved destinations and why 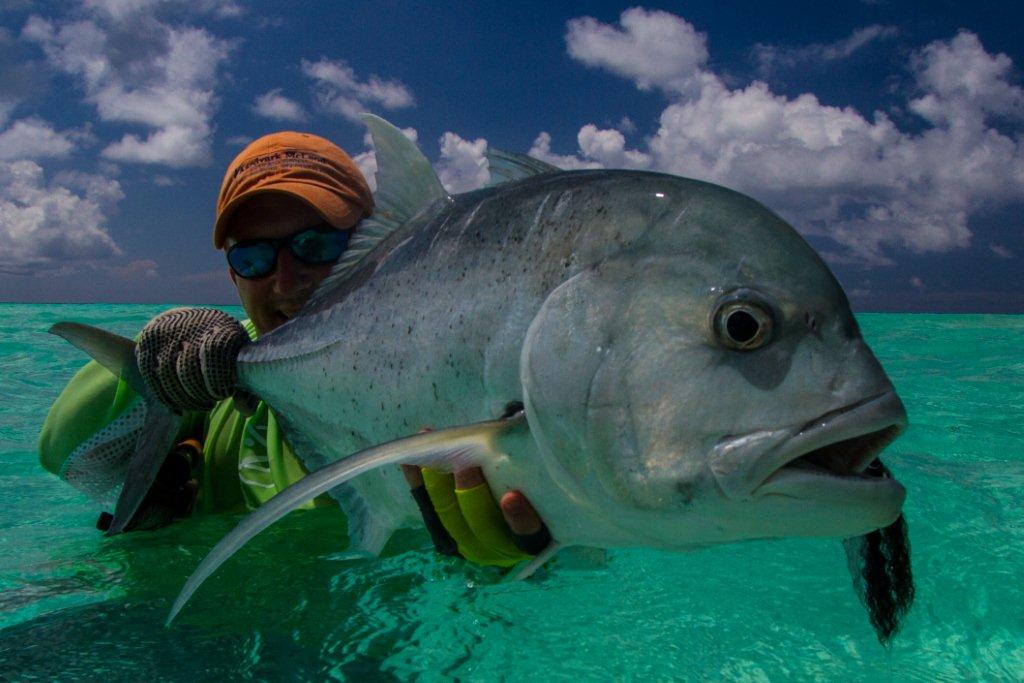 I love this atoll so much as it is one of the wildest fisheries that is land based, and also one of the few places in the world where there are numbers of bumphead parrotfish to target on the fly. Having said that it has to be about the GTs. There may be more on other atolls, but I have seen some fish on Farquhar that have dwarfed anything else I have seen. 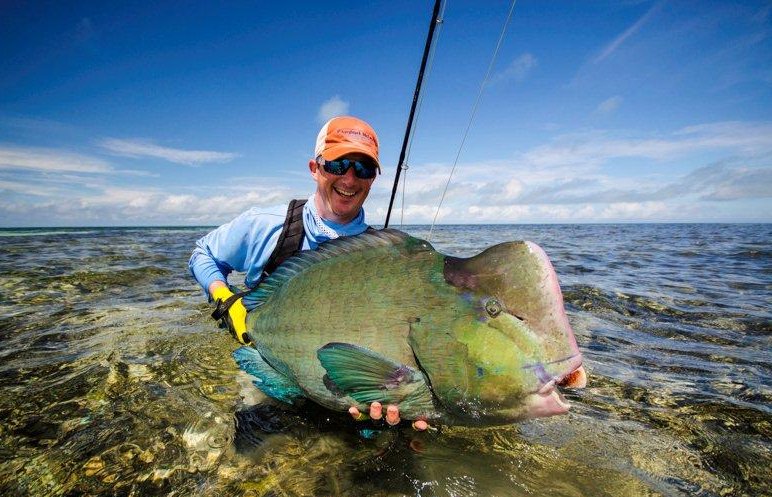 On my last trip there last year I had an extraordinary experience that will have me going back this year. While down as far out as we could get on the bottom of the low tide from Depose Jules smith and I were fishing with Scotty. Jules hooked a nice fish of the edge of the coral bommies. I kept an eye on the battle happening, but just then out of the corner of my vision a dark shape lumbered into view. My first instinct was that it was a large ray, and there might be a fish riding shotgun. As it got closer I suddenly realized that the whole dark object was one massive GT. I quickly began stripping off line, popped the 6/0 poodle out of the ring and began to wave it around my head like some kind of demented conjurer. 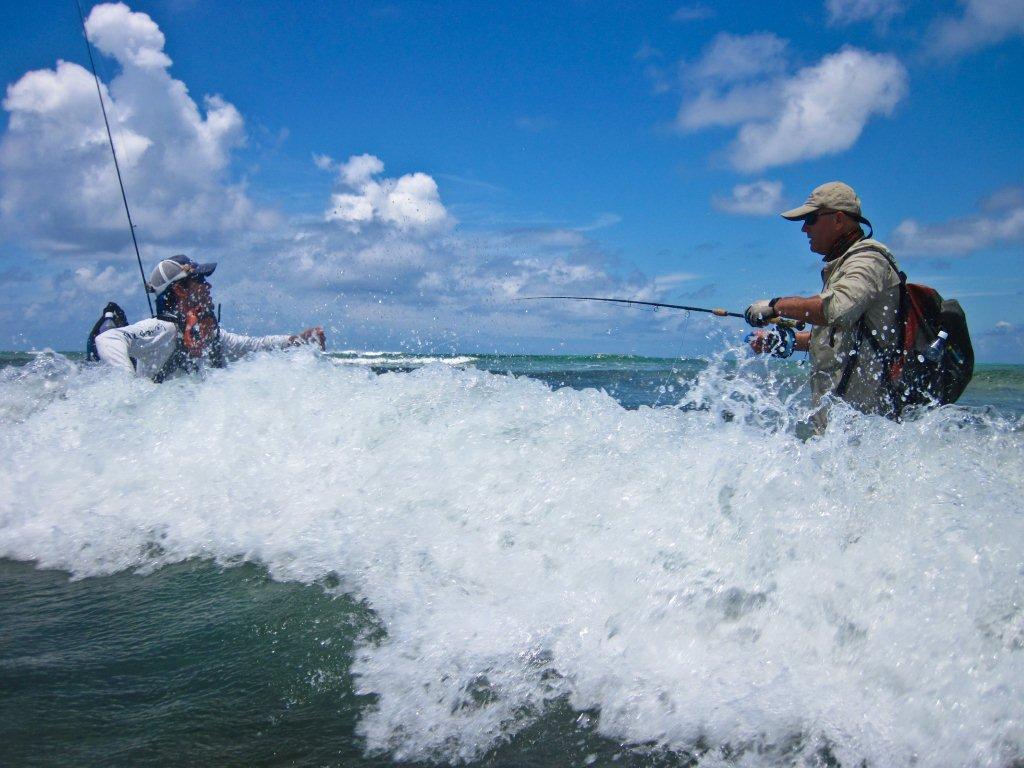 I slapped the fly down in front of the fish and it turned towards it, very casually and decided to follow although it looked like the beast barely cared. It ambled passively behind the fly as I gave it long strips. Suddenly it was as if a light bulb come on inside its head, it suddenly identified the floaty thing in front of it as food. The fish accelerated into attack mode, pectoral fins out, mouth agape as it charged through the surf towards me. I took several involuntary steps backwards as this massive fish smacked into my coral bommie, so large it could only manage to rest its chin on the edge as it tried to smash the fly. I can only assume that beaching itself like some disorientated pilot whale made the fish forget its snack and spook in a massive fountain of spray as I stood there contemplating whether it was after the fly …or me. Either way the exchange was over and I was left somewhat disoriented.

Scotty estimated the GT at 1.60m which is bar far and away the largest I have seen on the edge of the flats. That is why I am going back in October this year… to check.. obviously. I still have a few spots left if anyone would like to join me. 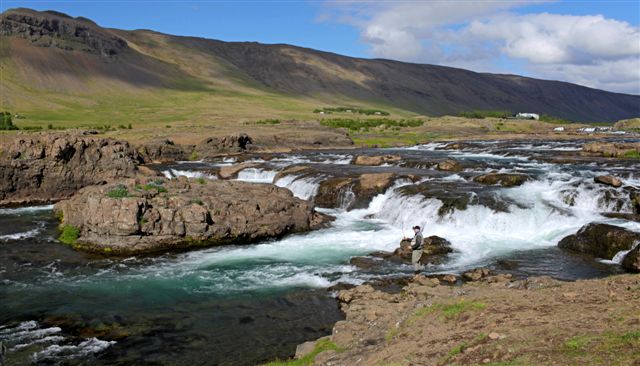 This little gem of a river was one of the first I ever fished in Iceland and where I developed my huge passion for Icelandic style salmon fishing. Having grown up guiding in Norway a salmon fly to me was not a real salmon fly unless it was 3 inches long, was made from arctic fox and thrown off a 15’ two hander with a shooting head system. Laxa I Kjos changed all that, and over the last eight years I have barely lifted a two hander to fish for salmon. I have become obsessed with the hitch. Sight fishing is what really gets me excited, and in the rock pools and runs of Kjos I watched salmon behaviour for the first time. I watched Atlantic salmon change from this kind of mystical species that suddenly appear at the end of the line into a fish like any other, one that can be excited, coerced and induced into taking. 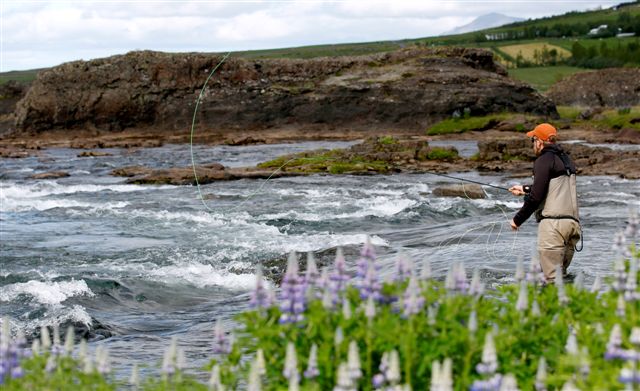 This river is the nearest that you will get to trout fishing for salmon. A small 9’ 6# or 7# is all that is necessary, and I have found myself sometimes going down to a size 16 red Francis or cm hitched plastic tube and watching the fish react as it riffles past them. They rise up and down in the water column, flash from side to side, nearly take and then don’t… or suddenly double back on themselves and inhale the fly. They lie in tiny oxygenated holes in the canyon, or rack up in the tails lower down and can be spied on from above. This amazing river also has some of the largest sea trout in the meadows I have seen outside of Argentina. That combined with outstanding guides, a boutique hotel style lodge and incredible food makes Laxa I Kjos one of my all time favourites.

Where would I return tomorrow given the chance? 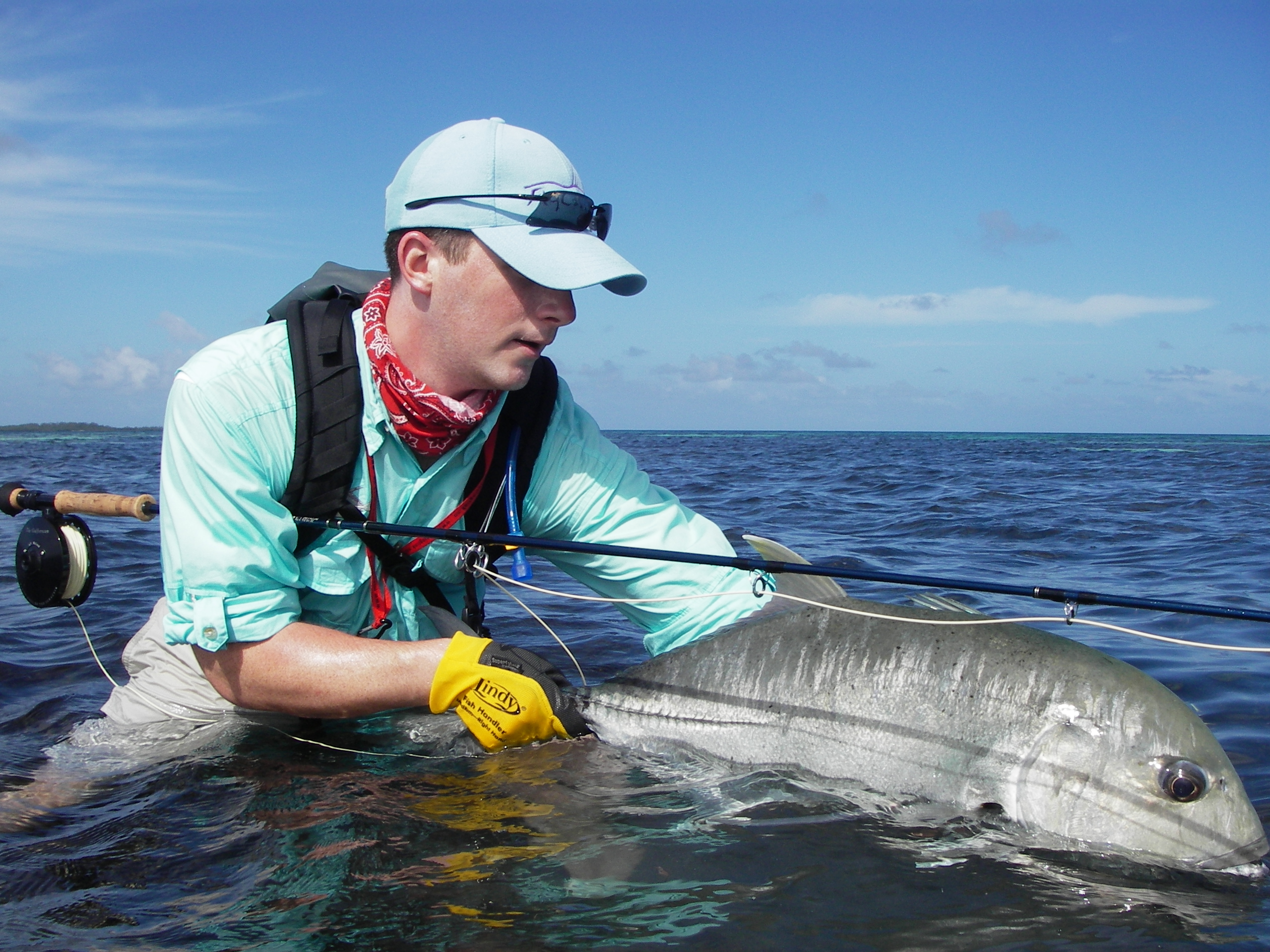 I first went down to fish these outer atolls in February 2006 with a group and then again in March 2008 with another team. At that point very little was know about them other than that they were teeming with fish, especially GTs. We caught well over 300 GTs the first time and I seem to remember 210 or so the next time. I remember being so tired by the end of the first week that I fell out of the boat one day. By all reports coming back now it has not changed, and having opened up this spring for the first time in 5 years or so in 5 weeks 1307 GTs were landed. My overriding memories were of packs of GTs rushing towards us on the flats as waded up to our waists, fish slamming into flies, biting rod tips off, smashing fly lines, rods and just general carnage. The bonefishing too was extraordinary, although few stopped long enough to experience it. We caught fish up to 12 lbs at our feet in front of Wizard Island which just blew our minds. I also remember the feeling of total wilderness, being on the edge of the earth where the bird life and fish life was totally unspoilt as there had maybe been a handful of visitors in a year. 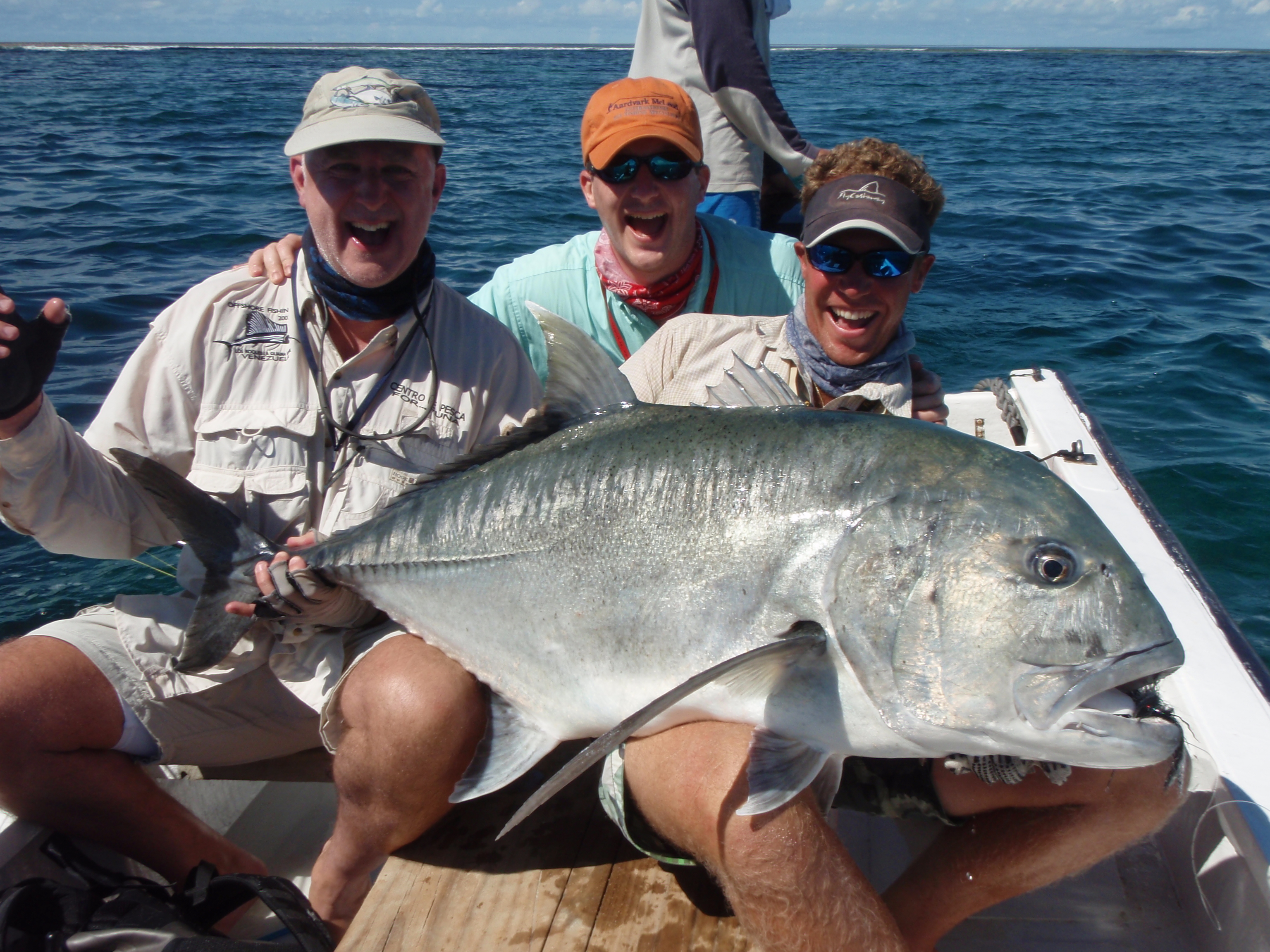 Astove is particularly special, one of the few places where you can stand on the edge of the flats and cast straight into the bluewater that dropped down to over a 1000 metres in front of few. We encountered some serious beasts along that edge, and the Astove Channel accounted for the largest number of rod breakages I have ever seen on a trip. We landed the smallest one of the pack that came out, and it is one of the few instances I have been nervous of casting at fish as I new something was going to break. Line, rod, reel…. Or me… I would go back in a heart beat, especially as the mother ship operating down there is a massive upgrade on the Indian Ocean Explorer that we first went down there on. The operators have just published their dates for the Autumn. 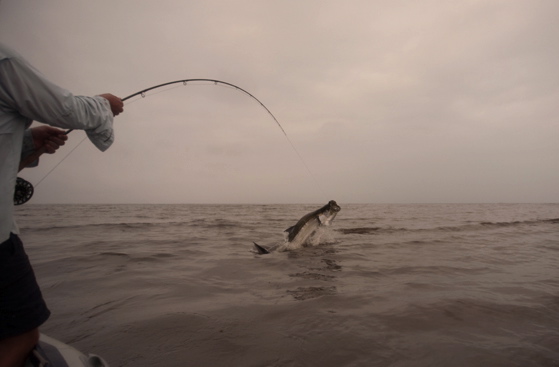 The Republic of Congo

The one thing I have never done is go a chase really big tarpon. I have hooked fish over 100 lbs in Cuba which jumped off, I have landed plenty of babies up to 50 lbs in Mexico, Belize and Venezuela, and my biggest to date is a 70 lbs fish from the interior of Venezuela on a 9# and a popper… which took me somewhat by surprise. I have never battled with the real big boys. A large area of the fishing grounds border a nature reserve with several river systems and coastal lagoons, lined by mangrove trees. These waters are home to big schools of tarpon. After numerous exploratory trips spanning two and a half years our operators have consistently landed huge tarpon in the 200 lbs range! 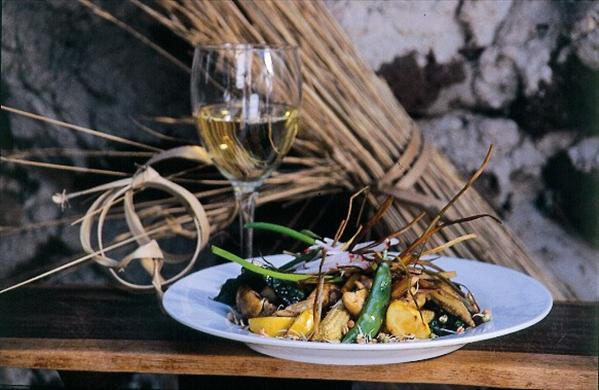 Due to the remoteness of the area and the difficulty of reaching this area by road it was decided that the most effective way to fish these waters would be by using an exploratory mothership and flats skiffs. This led to the birth of the mothership “Chagos” which was built in the USA, as well as three 20 foot Spear Orca skiffs. We are now in a position to host our guests in comfort and to provide a world class experience to an exclusive four anglers per week. The thought of being attached to a monster silver king of that size gives me goose flesh, and we will have dates to offer shortly.

If you are interested in travelling to these or any other destination within our portfolio why not contact Peter McLeod or call our office on +44(0)1980 847389.