Again the morning greeted us with clear blue sky’s and warmth of sun. A beautiful day, but perhaps not the best for salmon fishing. Our guide today was Bruno Lepage and he quickly took us off to our beat for the day, ASPB. After 15 minutes of bumping down the old logging roads the pool we would be starting with opened up below us. If someone had an opportunity to make a perfect salmon pool then this would have been it. From the neck to the tail the pool was about 300 yards in length, and again due to the crystal clear water many fish could be seen. 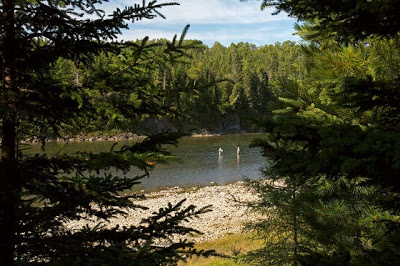 I fished down the pool and then up a number of times with the bomber, but failed to raise a fish. The blessing of fishing a river that is crystal clear is that you can see the fish you are covering. I have not discovered yet is if that is a blessing or a curse! As nothing had moved I switched to the two handed rod, a 13′ 8# Hardy Angel and a Rio Power Spey line. Fly choice, time to use the hitched tube again….
The fly began to skate nicely across the ledges and almost immediately a fish moved up and hit it, but cam slightly short. I backed up a few yards, gave it a couple of minutes, and then put another relatively long cast. The fly popped up on the surface and came across like a little motor boat. There was a bulge and the line went tight, and as the salmon thrashed in the clear water it almost looked like it was floating in air…. and promptly came out of the water. The silver bar of maybe 10 pounds or so slewed across the pool before erupting into the air again… the line went slack, and fish and I parted company…. Henry gesticulated wildly at me and called me a muppet, being his usual supportive self. 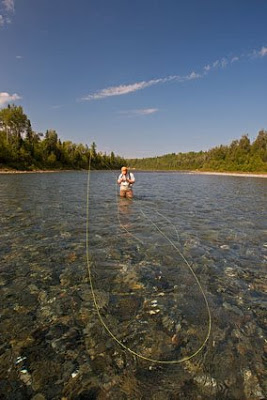 As it was lunch time the trio moved up to another pool little higher up the beat. There was a covered picnic table on the bank, and Bruno began to lay out lunch. I have to say that lunch on the river at Camp Bonaventure is one of the best I have had. The guides lay out an incredible spread, and this plus a glass of wine has one feeling a little sleepy. However, there was work to be done. Unfortunately the wind got up in the afternoon making casting tricky, and the air temperature began to fall. The fish hugged the bottom, and very little action was seen in the afternoon. I raised one more fish on the bomber, but I failed to hook it and we headed home feeling a little battered and sore.
On arrival back at the lodge and having thanked Bruno we threw all the gear in the back of the truck and headed down the road as we were staying that night at Salmon Lodge on the Grand Cascapedia. Salmon Lodge is very different to Camp bonaventure as it is a one hundred year old lodge that overlooks the Grand Cascepedia River. The river itself is bigger than the Bonaventure, but not quite as clear. It has a slightly tea coloured tinge, but tends to have larger fish but maybe not quite as many. On arrival Henry and I were blown away with the view up the valley, and also the wonderful feel. It was somehow more intimate and full of old fishing memorabilia. Dinner was outstanding, and the staff could not have been kinder. Guest staying here fish both the Bonaventure and the Grand Cascepedia, and the beats are moved around. It is perfect for a smaller intact party or those who are looking for a lodge with tradition and character.