Giant permit caught at the Isle of Youth, Cuba

Richard Ward recently returned from a two week trip in Cuba with Jack Simpson, and beat his personal best with a Grand Slam featuring a permit estimated at 36 lbs! Richard has been to Cuba many times and this particular adventure began at the end of April. Along with many other members of Jack’s group Richard booked La Tortuga in the Jardines de la Reina for the first week followed by a second week at the Hotel El Rancho on the Isle of Youth. 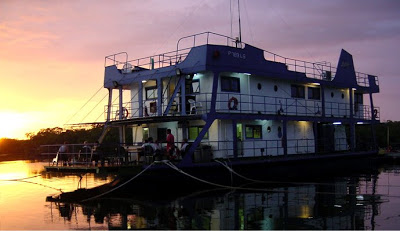 The first week at Jardines de la Reina required early starts to get amongst the rolling tarpon. Although the week was not as productive as some in past years, there were numerous migratory tarpon located outside the reef during the day daisy chaining and engaged in spawning rituals. A number of these would come into the shallower water to keep fishermen alert and Richard managed to boat tarpon every day to about 90 lbs. 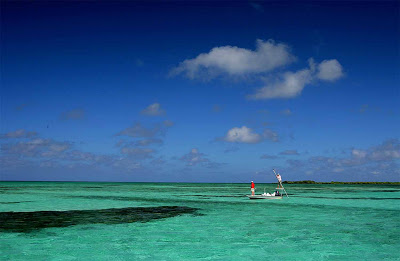 As the second week at the Isle of Youth progressed it was evident that the fishing was improving. All members of the party landed fish in the 70 – 90 lbs category. On the 4th May Richard had hooked nine tarpon and landed seven before stopping for lunch. Lady luck was smiling down on him as it is normal to hook many more than you manage to bring alongside the boat. All these fish were in the same size bracket as previously , and all caught on the flats on either floating or intermediate lines – classic tarpon fishing. 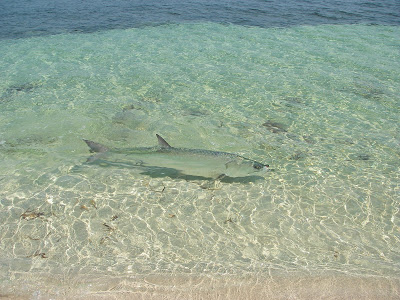 After lunch Richard and his guide Coki decided to go in search of permit, the fish that we all find most frustrating. While polling along the coral drop offs they eventually came across a group of six permit slowly cruising high in the water column. These fish were big, and Richard began to sweat. He made some casts to no avail, and despite changing flies and densities of lines he could not induce any interest. During one of these drifts down the edge, two fish of immense size made an appearance that Coki (who has caught more permit than anyone in Cuba) estimated at near 50lbs. After perusing through the fly box and trying every combination Coki voiced that the tide was wrong for these fish, and if they headed back to the same spot the following morning on the correct stage of the tide they would have a better chance.

The following morning they were out early, and there were tarpon rolling freely. Seeing a tarpon roll approximately 35 yards away Richard cast an “Orange Dillon” on an intercept course. Having allowed the fly to sink a little one slow strip later the fish slowly moved up and engulfed the fly. He set the hook as it turned away and all hell broke loose as it put holes in the ocean. He gave it some stick and after a hard fight they released a Tarpon of about 60lbs. Quickly afterwards he cast at and hooked another fish of about 70 lbs on a shallow flat of between five and nine feet in depth. The “Black Death” had been responsible for the take in this instance, and after a battle of twenty minutes or so this fish was also carefully released. A good beginning to the morning! 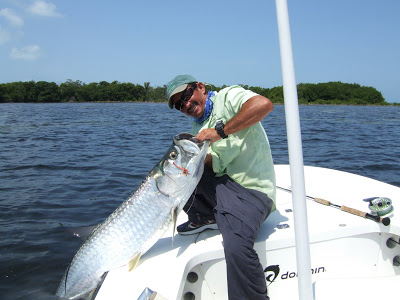 At this point Coki announced that the tide and wind were now correct for permit and the pair headed back to the same area they had encountered the monsters the day before. Coki began to poll the boat along the edge and having found a pair of disinterested fish found a further group of six. Coki had advised to switch to a floating crab, and while changing the fly Richard listen to his instructions on how to present the fly. Th line sung out through the rings and he managed to present the fly to within three feet of the lead fish. It instantly reacted, but before the fish could take the fly an even larger permit charged it out of the way and nailed the crab. A firm strip strike followed by a further three when he managed to get it on the reel and the fight commenced. For over an hour the fish made blistering runs, some for deep water, others for coral heads. The permit picked up weed on the line and tested his gear to the absolute limit. Even as he shorted his line and applied maximum side strain to pull the fish towards the waiting hands of Coki he still did not quite realise how large it was. Coki caught hold of the fish with a strong hand, and immediately began to jabber about this being the largest permit landed in Cuba on the fly. What a fish! After some quick photos the fish was carefully revived and released. 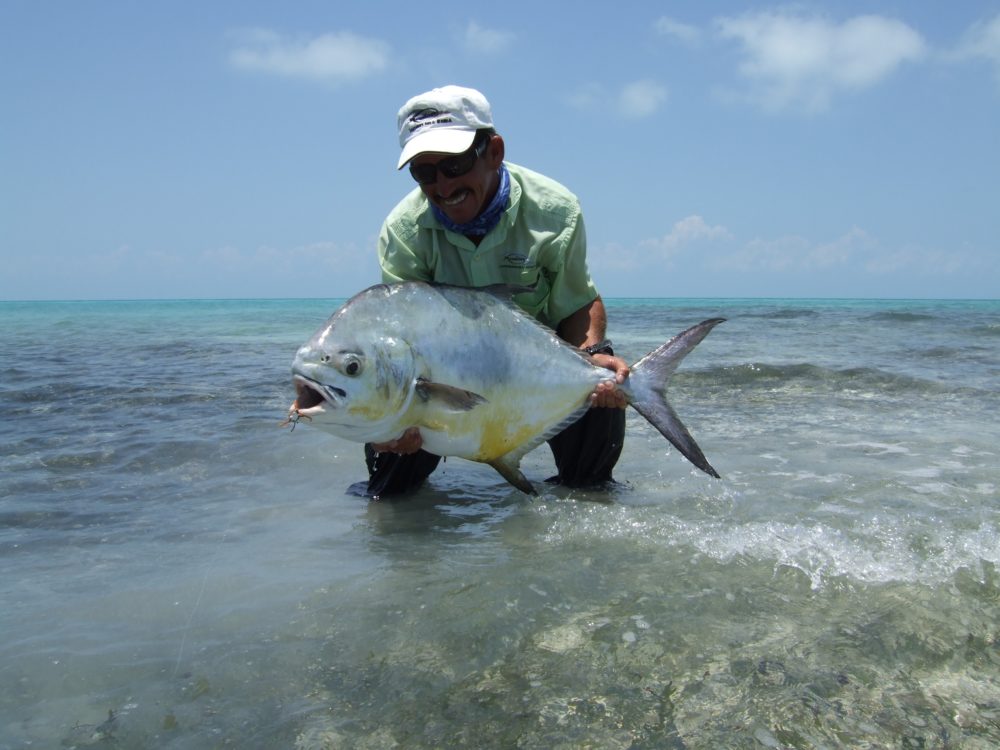 Right, tarpon and permit achieved, only the bonefish needed for a Grand Slam! Richard changed to his bonefish rod and further up the flat in the shallower water was a single bonefish. Casting a small crab pattern at the fish Richard gave the fly two small strips and the bonefish turned and immediately hovered up his offering. A couple of strip strikes had it headed for the horizon in an attempt to relieve him of all of his backing. After two more long runs well into the back they he had the fish to hand. A cracking fish of about 5 ½ lbs and the perfect way to finish the Grand Slam. This was Richard’s seventh Grand Slam in Cuba, but one he will always remember! He did spend the remaining the 2 ½ hours looking for a snook in a world class snook fishery to complete the Super Grand Slam, but to no avail… well, that’s fishing!