The most recent report from the blue waters of Guatemala …..

You just never know in May. Some days the weather is great, the fishing is close in and the seas are calm – other days you can burn 150 gallons running outside searching for blue water and a consistent bite.
So it has been this month. Early in the month the weather patterns changed a little and pushed the blue water out as far as 50 miles. There were little pockets of clean water here and there that when found, held decent numbers of fish – but if you wanted to be sure of a strong bite….you had to make the trek.

By the middle of the month, we were getting tired of the fuel bills – but the fish were still not co-operating and we were running out at least 40 miles each day. The fishing was good with plenty of hungry sailfish and lots of bait in the water. Often we were surrounded by enormous schools of spinning dolphin which are often a sign that the tuna are about to turn on as well………..but we were focused on the billfish. Finally after another week of running around searching for a break closer to shore, we were able to find decent water that was holding fish at about 18 miles.

As the water had pushed in, it brought with it plenty of debris and weed that held plenty of bait and of course plenty of dorado. On one occasion while heading offshore, we were surprised to find huge weed lines only six miles from the dock……..so of course we had to toss over the dolphin teasers and see if cerviche was on the menu! The dorado were not big, only averaging eight pounds or so – but perfect eating size – and while we could have filled the boat with them, we limited ourselves to sufficient for dinner the next couple of nights and continued offshore.

Now we were finding sailfish starting about 16 miles and the bite got stronger as we headed further out. Once we got to about 24 miles, it was clear that the billfish were very concentrated over some structure – and while the fishing was consistent in a box about a mile on a side, it was barren once you stepped outside. We have been raising twenty plus sailfish every day for the last couple of weeks and on most days have managed to raise at least one blue marlin. Now into June, we are encouraged by the continued strong bite and are looking forward (hopefully) to some great tuna fishing being put into the mix over the next few weeks.

The billfishing this season has been pretty consistent(ly good!) from October until now, and so we are hopeful that the100% catch and release policies continue to ensure that Guatemala remains the pre-eminent destination for large numbers of sailfish. We are already booking strongly for next season and are happy to announce that we are continuing our policy of reservations made now and paid by August 2015 will be confirmed at this seasons pricing regardless of any price/fuel changes for next season. 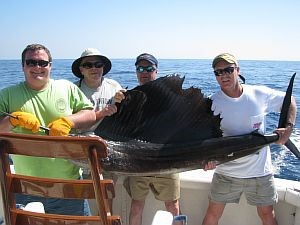