Client Report; A Day on the Hampshire Test by Andy Jones

Andy Jones, visiting Hampshire from Australia, contacted us during the famous mayfly hatches of the southern English chalkstreams looking to fit a day out on the River Test. With luck we were able to offer a beat on the confluence of the River Anton and River Test. Andy documented his day through a great blog post on the Australian website www.flystream.com.

Stockbridge in Hampshire is one of those towns which really comes alive during the flyfishing season, with mayfly hatches bringing fishing tourism to its peak during May.

The town is well located with the famous River Test running through it and various gastro-pubs and hotels servicing the generally well-to-do clientele chasing the Test browns. In the heart of the town is a wonderful fly shop, Robjent’s, named after its owner, Alistair Robjent. I found myself there last week on a quick side trip during a family holiday, poking through the huge assortment of flies (largest fly range in the UK apparently) and talking with Alistair about the local fishing. 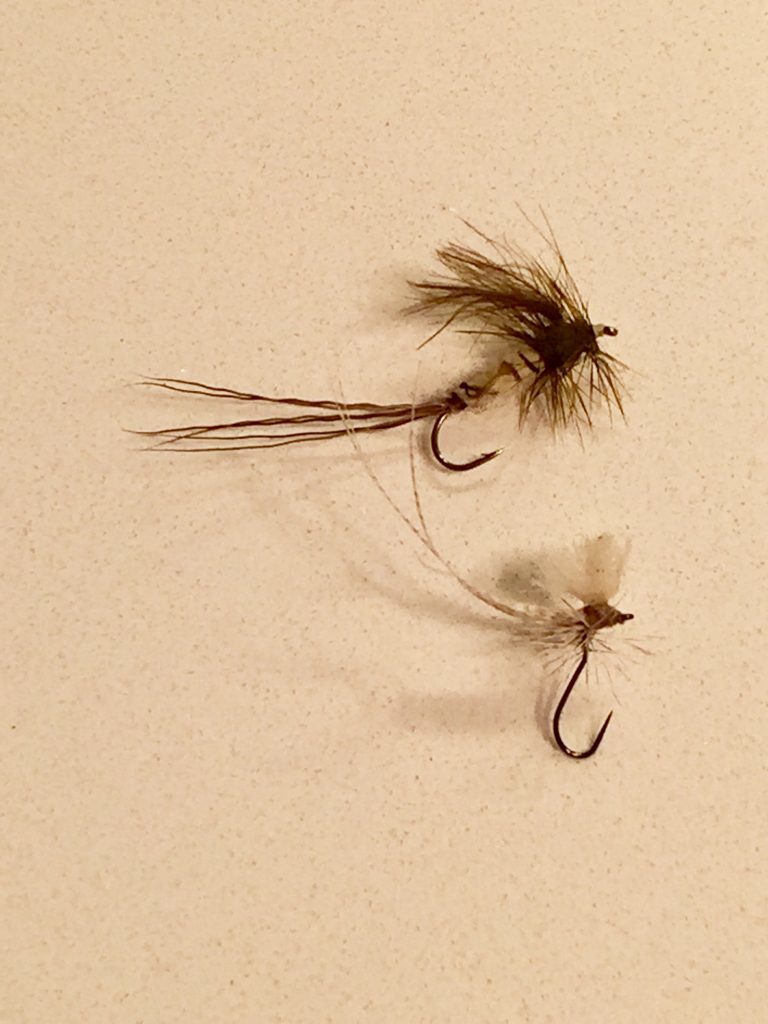 Walking through the small Hampshire town earlier, I’d spent half an hour watching several large fish chase each other in the pool just above the road bridge, which persuaded me that a day’s Test fishing was required! So, armed with a handful of the local mayfly patterns, a new pair of Smith glasses (I’d lost mine at Millbrook the week before) and a brochure for Aardvark Mcleod Fishing Adventures, I headed to the Greyhound Pub for a pint in the garden and to try to book a day of fishing. I called Aardvark and was surprised how much water they offered. I booked Beat 3 at Fullerton, just up the road, for the following day. My challenge was going to be juggling family commitments and a day on the river at a cost of £240. 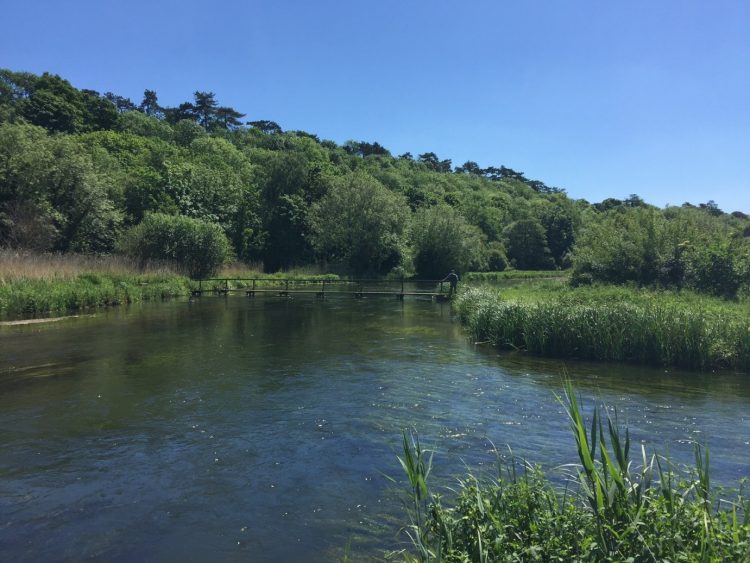 I arrived at my beat behind the famous Mayfly pub at Fullerton just before lunch. My beat was surprisingly long and consisted of a good variety of different habitats. There were deep pools, reverses, shallow gravel flats, long glides full of weed ribbons and a couple of weirs. The banks too were a mixture of mowed grass, trees (making roll casts essential) and wide reed edges which wooden pontoons poked through to allow access to the water.

The Test was running not quite as chalk stream clear as it can do, but with the new polaroids, I could clearly see the fish lying deep in the pools and between the ribbons of prolific weed. This time of year in Hampshire, it’s upstream dry fly only. No getting down deep to the fish; I had to rely on coaxing them up.

I started off by heading to the top of the beat which was marked with a weir and deep pool. This pool contained many fish, several of them large. However as they seemed more interested in chasing each other than actively feeding, I left and walked to the bottom of the beat where my stretch of Test joined another larger braid. Upstream the Mayfly pub garden sat next to the river as it swept down and away to my right and around a bend; wide, clear and graced by white swans with a lush green backdrop. The river really was at its loveliest. 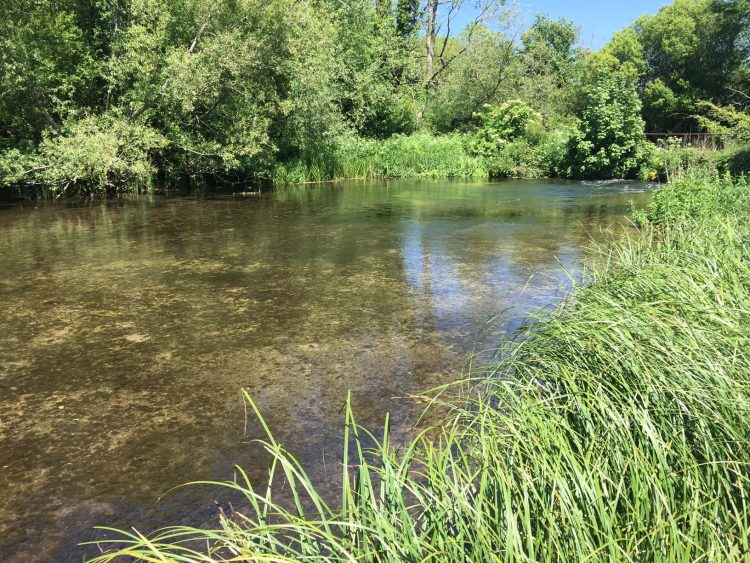 After a few photos I started a much slower walk back up the river searching the water for my first target. I soon spotted a rise hard against the bank in a slower piece of water. I cast a mayfly emerger and immediately there was a slash at the fly but no hook-up. Recasting to the same spot, I had another take but again no weight. I needed to slow my strike down, similar to fishing the lower Mataura in NZ with a ‘God save the Queen’ pause. Another rise in casting range, a decent wait on the strike, and I had my first brown to the net, a lovely 3 lbs. 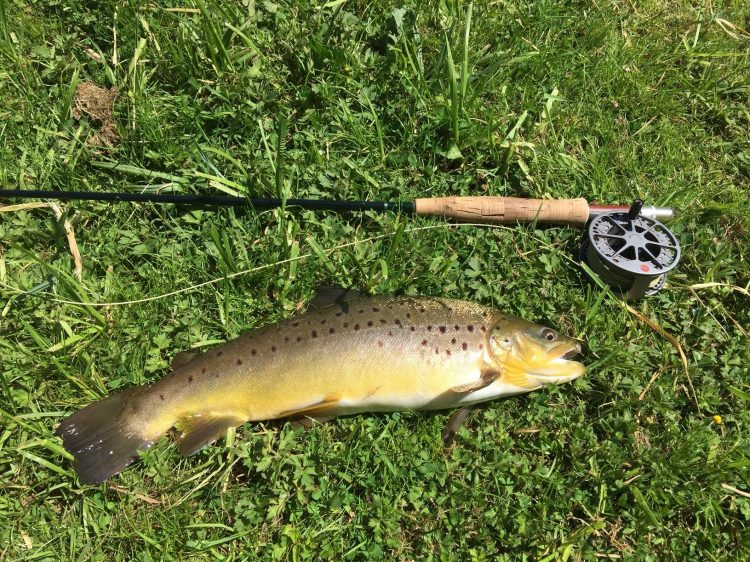 I could see that the majority of visible fish were nymphing down deep, but amongst them there was sometimes a trout sitting higher in the water column, and while not actually rising, these were the fish I targeted.

Sometimes it was the first or second cast, other times I needed to change flies several times, but every now and then the trout would come up to take the fly (or refuse it at the last second) when presented just right. 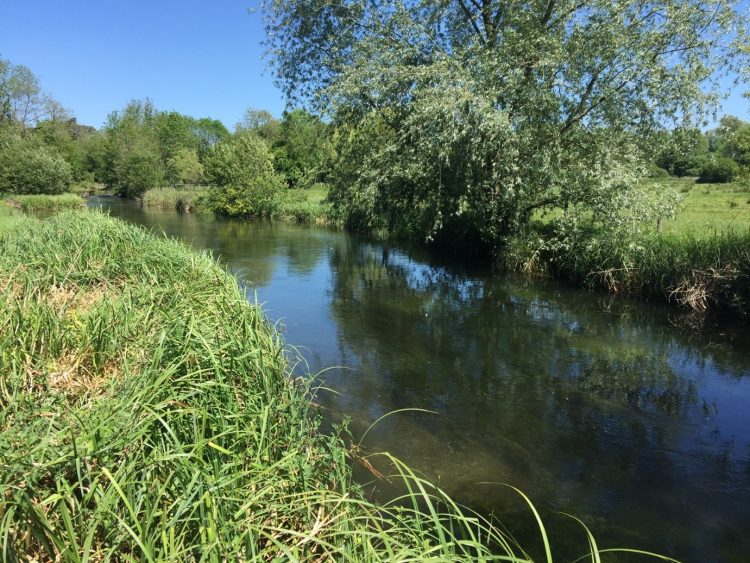 The mayfly started to appear in earnest around 3pm, and with them, more rises began to break the smooth reflections, so switching my emerger for a wonderfully-tied Robjent’s mayfly pattern, I continued to target individual trout. 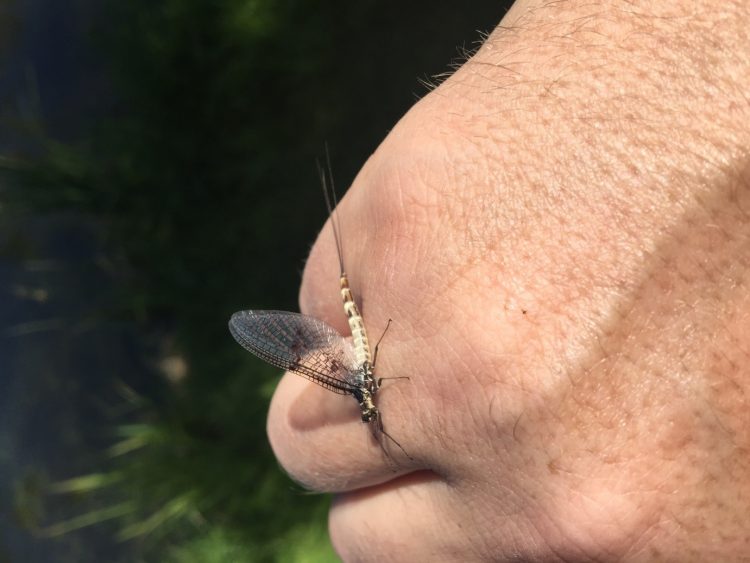 Not every fish was compliant, and the conditions weren’t perfect, being hot (27 degrees) and full sun with a persistent strong breeze, but through the afternoon I landed and released six browns, all between 2.5 and 4 lbs and in lovely condition. Interestingly, it was rare for a fly which simply drifted past a trout to receive a positive response. It was much more effective to land the fly just ahead of the fish, as if seeing/hearing the fly land was a precondition for any interest or take. 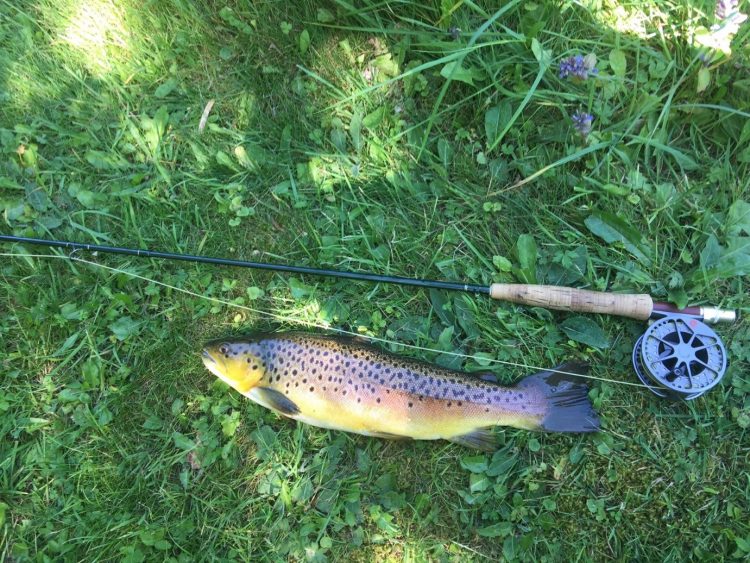 With the time approaching 5 o’clock and the inevitable traffic I would face, I decided it was time to drop back the landing net which Alistair had kindly lent me and hit the motorway. Even though I knew the best action was about to start, I was surprisingly content to be heading away from the river, knowing that I’d had a wonderful day of fishing, and that I would still be back in time for the family dinner.

For more information about the mayfly and Hampshire chalkstream fishing please contact Alex Jardine or call our office on +44(0)1980 847389.