Katka has been competing at the top level for a long time and has won the Czech women’s championship five times in six years. In this year’s European championships as part of the Czech ladies national team she helped to achieve an incredible 4th place, in the men’s category! Currently she is guiding on the Laxa I Kjos and has been experimenting with French leader fishing for salmon. 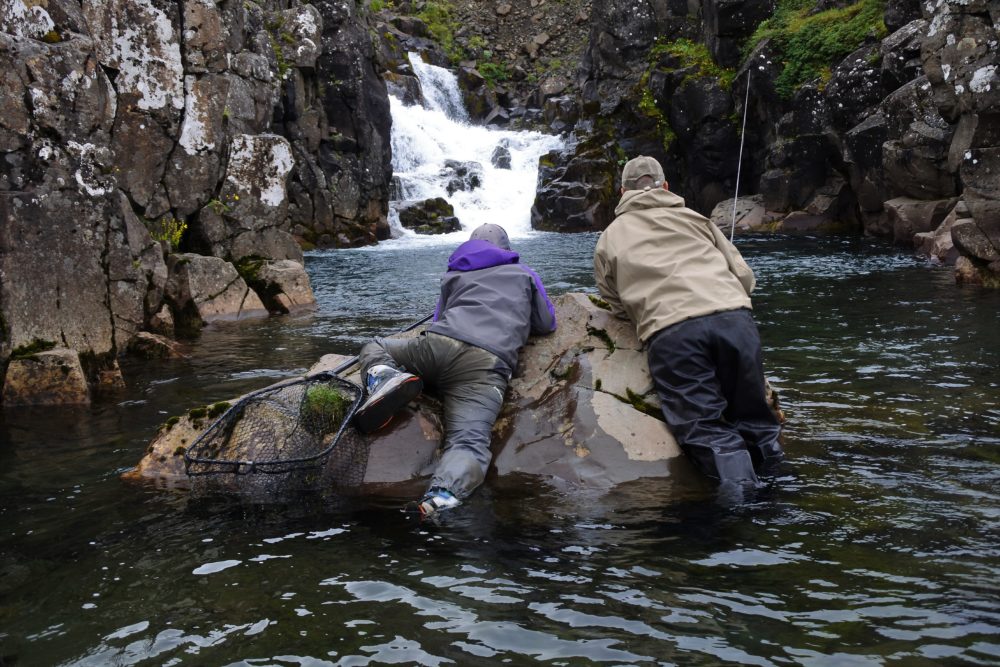 What is French Nymphing?
Originally the French Nymphing technique was conceived by the French national team during the World fly fishing championship in 2000. In the following years the Belgian and Czech national teams adopted the technique and continued to evolve the concept which by now had almost totally replaced the Czech Nymphing technique. Over the course of that last 15 years many fishermen from all over the world have moved from classical upstream fishing style of dead drift fishing and adopted the French leader technique. 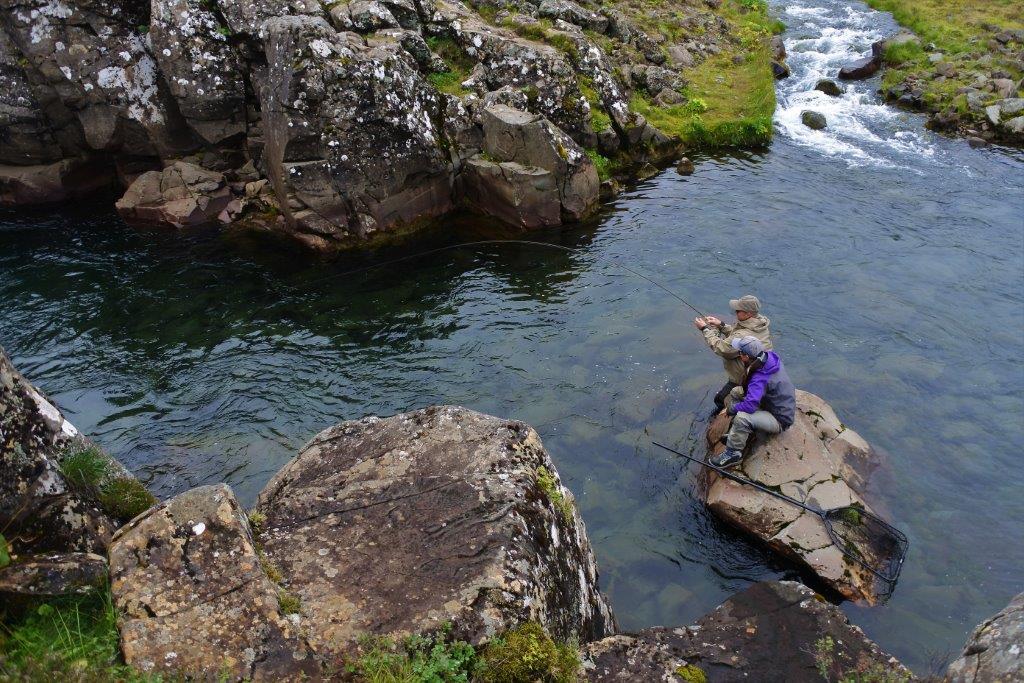 The French Nymphing technique is the perfect style to catch spooky fish in most situations in running water. The principal difference in using the French leader to any other nymphing methods is the lack of fly line. The French leader consists of a very long tapered monofilament leader ending in a shorter colourful indicator piece. The fly is cast upstream into the current, a few meters above where you potentially expect fish to lie. As you cast, the rod is raised to keep leader and indicator just above the surface. Your fly or flies are allowed to swim towards you while you watch the indicator all the time. If you see any movement of indicator you strike. 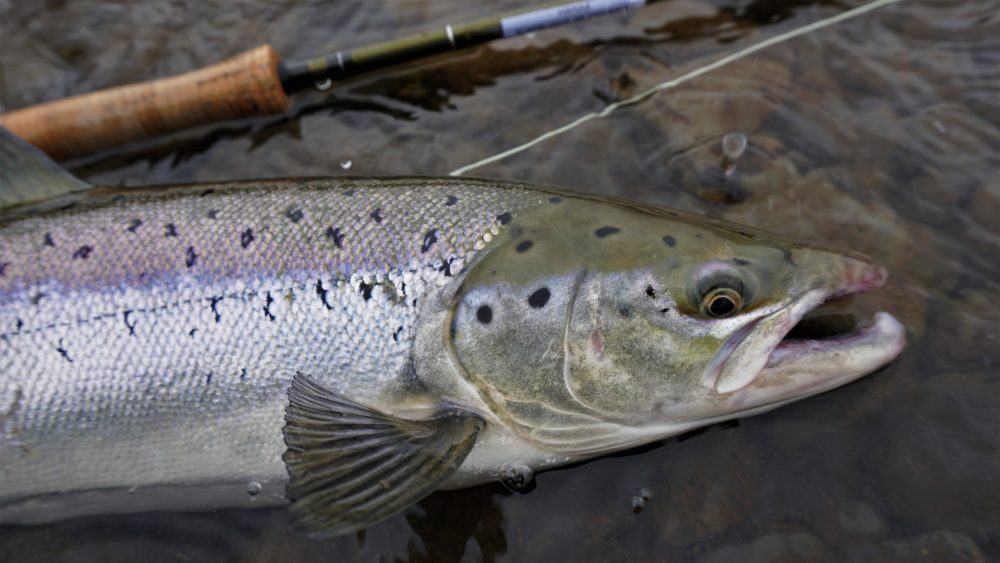 The advantage of using the French leader methods are:
1)      The lighter leader allows very sensitive fishing for spooky fish
2)      Flies can be presented with no drag and therefore look natural
3)      Exact casts which can then be repeated rapidly
5)      It allows your flies to travel at a specific depth
6)      It is high-contact fishing, where you see and feel every strike 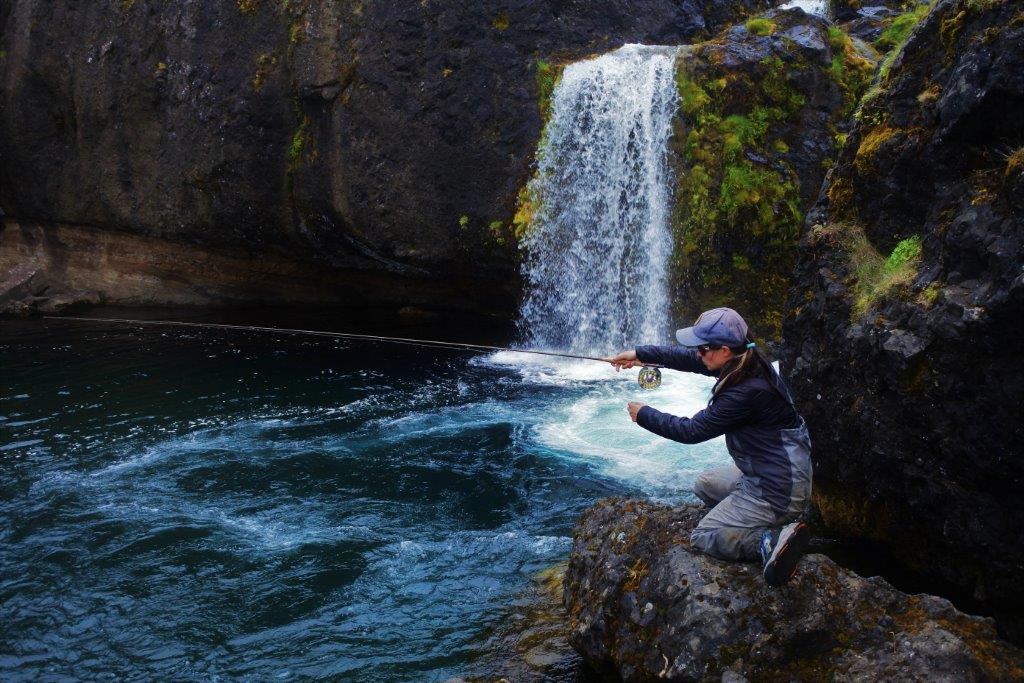 Does it working for salmon?
While guiding on the Laxa I Kjos of the course of the summer I used this technique while teaching clients and proved it is also highly effective when fishing for salmon and sea trout.  Even after the first few cast I began to get very excited as I could anticipate how effective this technique would be from seeing their reaction. The crystal clear water of the Icelandic rivers lends itself well to this method.

We found it particularly effective during the latter part of the season when the water levels are low. Salmon by this stage have seen numerous flies presented in a standard fashion, the French Nymphing technique was highly effective. You can’t cast extremely long distances, but by sneaking up behind them it is possible to get very close to the fish. I suspect it will not work on large deeper salmon rivers, but as long as you can find some pockets in the structure it is definitely worth trying.

The joy of fishing in Iceland is the ability to spot these fish first. It is then easily possible to lead your flies towards them. Try to keep the fly as steady as possible and just shake the flies by lifting the rod tip in front of fish’s mouth in an induced take. I have found that usually the cock fish that have been in the river a while ignore flies which are just swung in the current. Once you shake the flies a bit, they go crazy and will often attack the fly immediately. 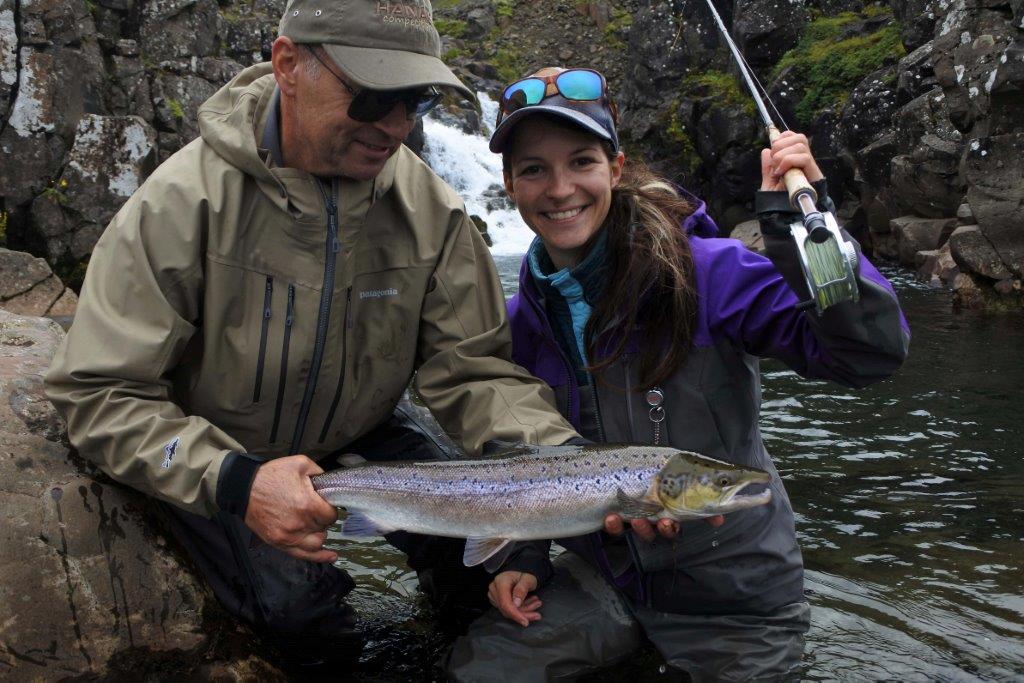 Tackle setup for French Nymphing for salmon
Rod
Usually the line weights used for French Nymphing are in range of 2 – 4# with a medium or medium to fast action with a softer tip. For salmon I use a 10’ 7# Hardy Zephrus AWS which i find to be ideal. when fishing for smaller grilse I drop down to the Hardy Zephrus Ultralite 9’9 5# For salmon rivers a longer rod is useful for covering fish from further away.

Reel
In the case of salmon fishing the reel isn’t just a fly line holder. You need to invest in a quality reel with strong drag system. Reels should be well balanced with the rod and ideally as light as possible as you are often holding the rod aloft for extended periods of time and recasting. A wide-diameter reel is recommended to avoid a tangled leader. I use the Hardy Ultralight CADD 5/6/7 and 4/5/6 which is beautifully light yet has a powerful drag system.

Backing
Fly line backing is something most freshwater fly fishermen don’t see very often but in the case of salmon fishing with French nymphing it is often needed. As you are using a very soft and gentle approach be sure your reel is loaded with enough backing in a case you hook a fish that make long runs. I always use an old fly line directly connected to the backing and on the other side to French leader. 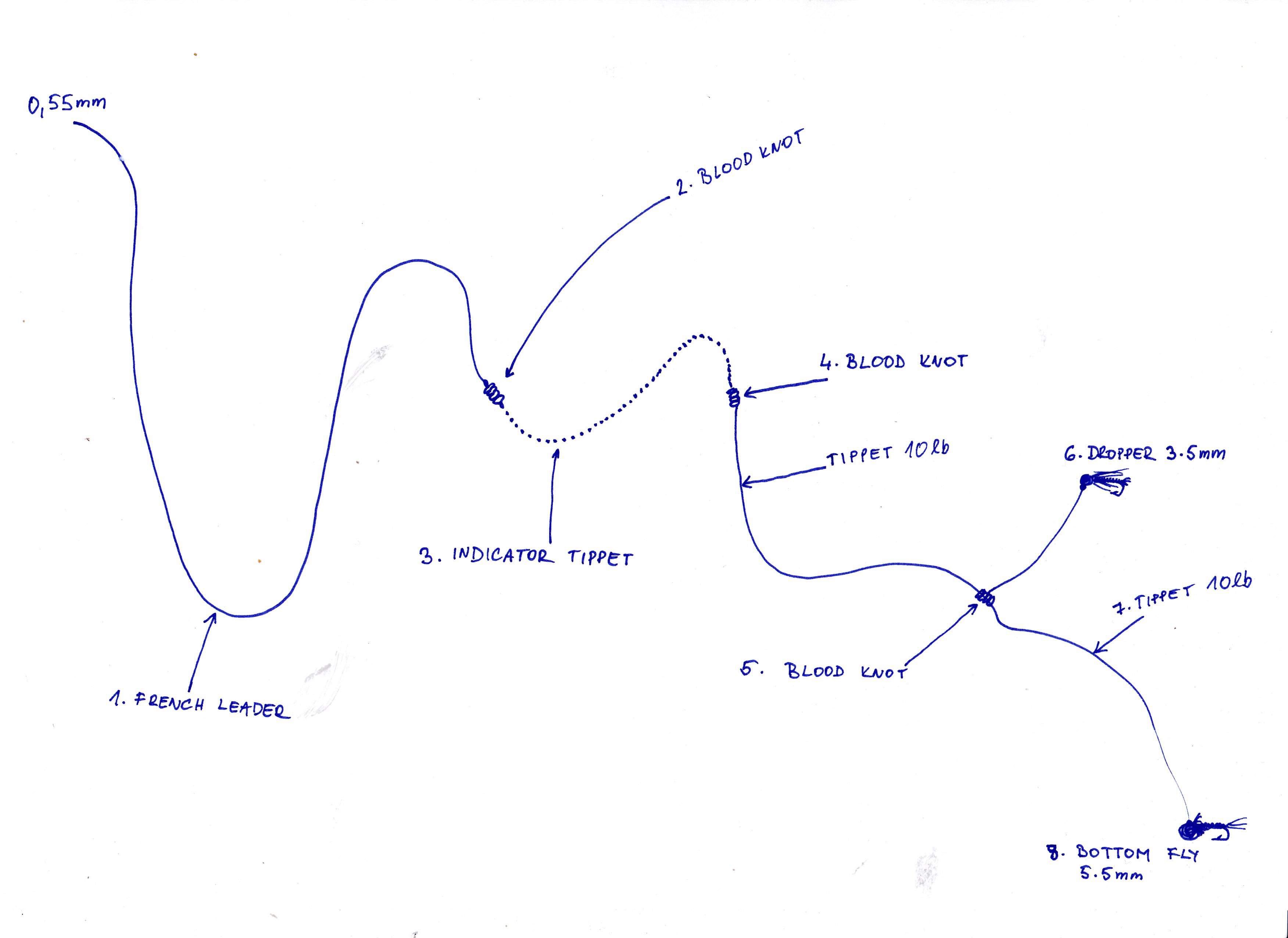 French leader
I personally use a tapered monofilament leader of 10 meters in length. The diameter is in range of 0.55 mm – 0.30 (0.27mm). If you buy a tapered leader that has the thinnest part at 0.22mm (usual shop bought product) the best way is to cut off the first few centimetres and use just the stronger part (8 – 9 meters should be enough). Fishing a 10 foot rod together with 30 foot leader will keeps you in effective distance from fish.

Indicator
The indicator is simply just a piece of two tone indicator tippet (0.27). The colour should be chosen according to individual taste, whatever you are able to see in different conditions (sunset, sun, twilight, rain). I would say the most common one is the two tone fluorescent tippet with pink and chartreuse. I always use a blood knot to connect fluorescent indicator to the French leader. Connection between the indicator and tippet is always the most critical part of the set up. For that reason always be sure that your knot is well tied.

Tippet
There is always a possibility while fishing with the French leader to use really thin tippet (0.08-0.14mm). I use that strength only for stream fishing for smaller brown trout or graylings. Salmon is obviously a different situation but still you can use much thinner tippet than usual. While experimenting we have used 0.24 mm tippet (10 lbs approximately). Combined with this technique it is still a strong enough tippet material to handle most of the situations. I almost always use one point fly and one dropper to get flies straight on the bottom. 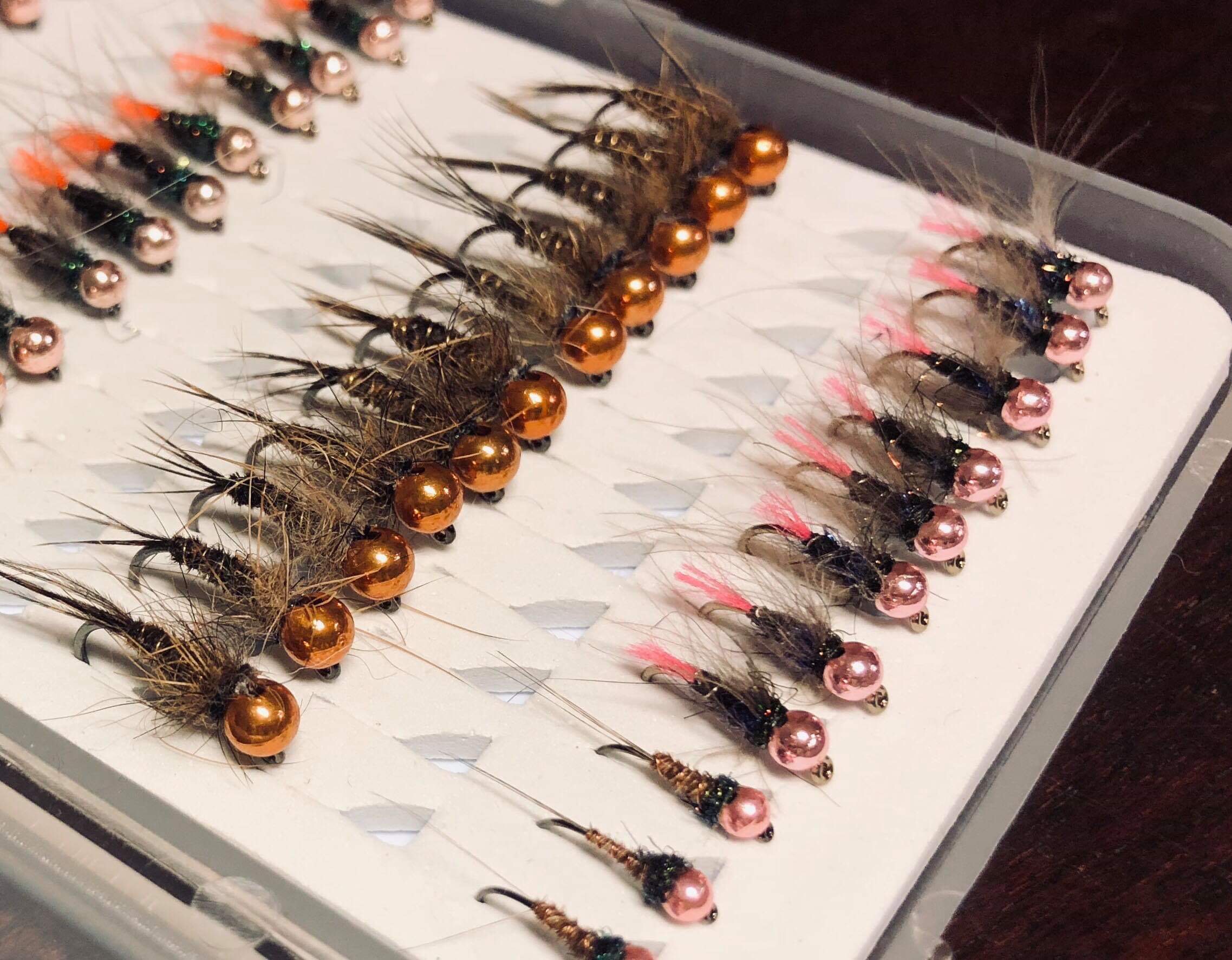 Flies
The same types of flies are used for the French Nymphing technique as for Czech or Polish Nymphing. The most weighted fly is always the point fly and it will help you to cast more easily with more precision. Tungsten nymphs for salmon are a bit different from other tungsten flies for brown trout or grayling. Usually the size of beads for trout and grayling is in range of 2.0 mm – 4.0 mm. The size and weight of flies always depends on water conditions, but the most common set up for salmon will be 5.5 mm tungsten as a point fly and at 3.5 mm tungsten nymph as dropper.  I can highly recommend flies tied on jig hooks to avoid get stuck on the river bottom every time.

If you would like to try this technique on the Laxa I Kjos this coming season then please click HERE or contact Peter McLeod or Alex Jardine or call our office on +44(0)1980 847389.