Iceland Giants – Why is Iceland such a prolific hunting ground for big brown trout, by Denise Ashton 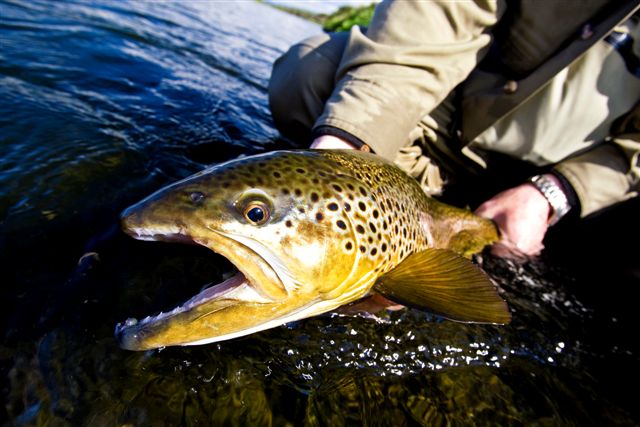 My view of Iceland was of a land filled with volcanoes, glaciers and a few Vikings, of rivers with salmon and (probably) arctic char, and overall a largely pristine environment.  This is partly correct (fire and ice and Vikings), partly wrong (the pristine bit) and missing a key fact: Icelandic rivers and lakes support very good populations of big brown trout.  The quality of the fishing has been favourably compared to New Zealand by people who have experienced both countries in some depth, as the resident trout are big (catching fish averaging 5lb on some trips is not unusual) and if anything more plentiful and easier to hook – but not land- than New Zealand trout.  My curiosity is aroused.  Why does Iceland support such big wild trout? 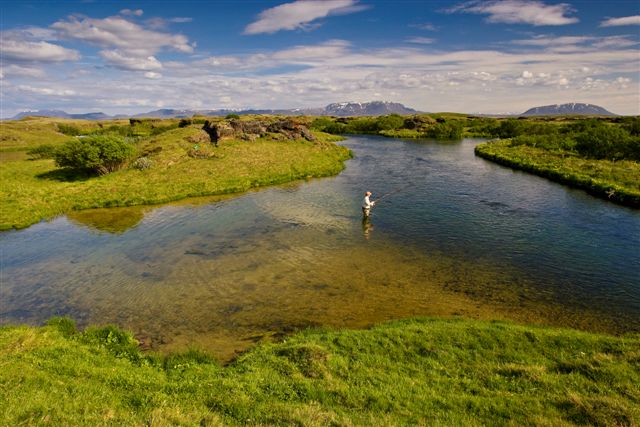 My initial research showed that Iceland is far from pristine and has an environment that (superficially at least) is not conducive to any trout let alone large numbers of big trout.  The first settlers arrived from Norway in the 9th Century, and they rapidly cleared virtually all the forest and grazed sheep to such an extent that the biggest environmental issue in Iceland today is soil erosion.  Winters are long and tough – 5 months of the year with temperatures at or below freezing, four hours of daylight in December and January. Summers are short and cool, with average July temperatures of 8.6°C but with almost 24 hours of daylight. Three quarters of the island is covered by glaciers, volcanic ash or lava with little or no vegetation. Some of the rivers are fed by glaciers, and are cold, milky with fine sediment and have low  productivity. It is possible to understand how Arctic char thrive in these rivers, but not trout. 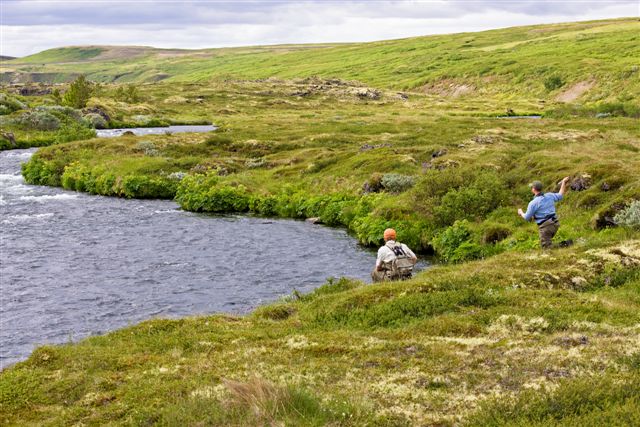 However, there are rivers that are spring fed, and the volcanic springs may be warm or cold and they are rich in nutrients and support an absolute explosion of plant and insect life during the short summer.  Where the springs feed a shallow lake, as they do in Lake Myvatn in the north east of Iceland, then the lake brews a rich organic soup to feed the river that flows from it, in this case the Laxá I Adaldal or “Big Laxá”.  Myvatn means ‘lake of midges’ in Icelandic, and in still weather there are black clouds of midges. Very few of them bite, thank goodness. They just buzz around in your ears and up your nose. The ‘midges’ are both blackfly (Simulium ) and midges (chironomids) and they are all tiny. 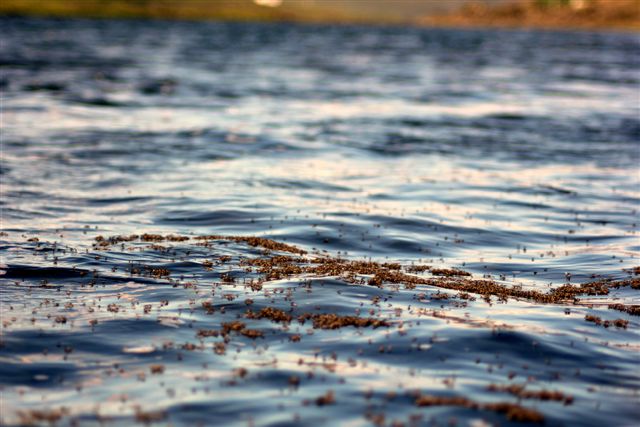 Laxá trout can reach over 60cm long, but even these very large fish are feeding almost exclusively on tiny flies and snails. There isn’t much in the way of bigger prey, except for other trout and sticklebacks or the occasional terrestrial such as heather flies (Bibio ), but there is a huge volume of blackfly and midge larvae. By August, the slower sections of the Laxá are thick with green algae sprinkled with black fly larvae, and the trout are feeding 24 hours a day, rising to hatching flies or falling terrestrials. Dry fly heaven as long as you have good eyesight to see tiny flies. 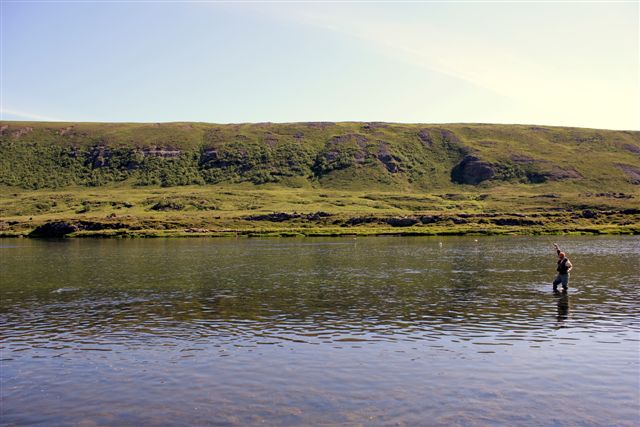 The very high level of productivity of Lake Myvatn is driven both by nutrient rich springs and by the very long hours of daylight in summer (21 hours of daylight in May and June), which promotes the growth of algae and invertebrates. The river and lake bed is either black sand or lava, and these dark surfaces are exposed to long hours of daylight with no ‘night’ to cool down and no trees for shade, only periods of overcast skies, fog and cold winds. The result is surprisingly high water temperatures – up to 18°C. Oxygen levels in the river remain tolerable as the water froths and tumbles over hundreds of waterfalls and rapids. The short summer is followed by frosts in September and rapidly reducing daylight hours. Lake Myvatn is partly frozen from October until May or early June and the river is cooled by chunks of ice from the lake. The trout must move from very high levels of activity and 24 hour feeding for three or four months to very low levels of activity for the rest of the year. 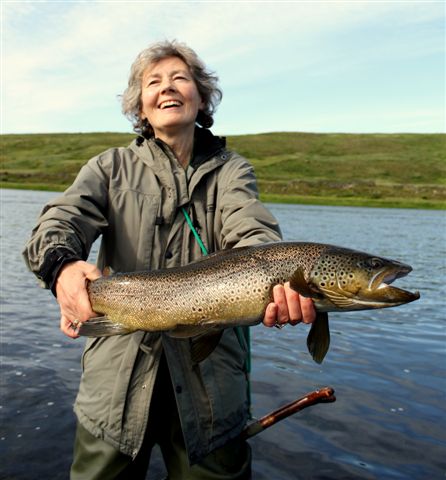 Whilst Lake Myvatn and the Big Laxá are known outside Iceland  as highly productive ecosystems and attract bird watchers as well as fishermen,  other lakes and rivers in the apparently barren highlands of Iceland also support good trout populations and for much the same reasons. They are fed by volcanic springs rather than glacier melt or surface runoff, and benefit from an explosion of life in the summer. The single most productive trout fishery in Iceland is the complex of 30 lakes at Veidivotn in the south central  highlands. These are volcanic lakes, formed in 1477, and are fished by 80 rods and by nets. In 2011, these lakes produced 14,608 trout, the largest of which was almost 14lbs (6.3 kg). The largest lake in Iceland, Thingvallavatn, regularly produces trout of over 22lbs (10kg). Trout seem to thrive in the spring-fed rivers and lakes of the highlands, many of which are isolated from the sea by the huge waterfalls and gorges that drop from the plateau to the coastal areas. 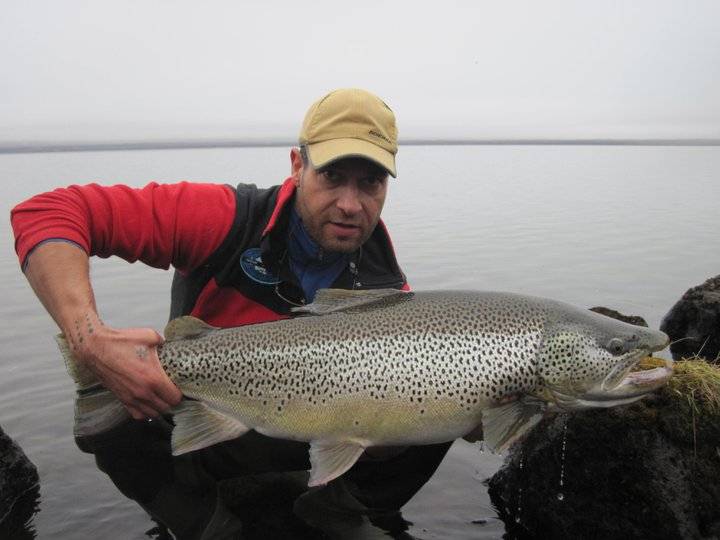 Is there anything we can learn from all this? I think one thing is to be optimistic about trout and their ability to find some suitable habitat, to adapt and survive, whether it is in the sub-arctic volcanic deserts of Iceland or under a shopping trolley in the River Wandle in London.

My thanks to Magnús Jóhannsson of the Institute of Freshwater Fisheries in Iceland for his help in writing this article. Written by Denise Ashton from the Wild Trout Trust. The Wild Trout Trust stimulates hands-on, in-the-water projects, helping others to help themselves with habitat improvement in and around rivers and lakes. Every trout fisherman in the UK should be a member.

If you want to come and experience these giant trout for yourself then we still a few rods left on Alex and Charles Jardine’s hosted trips in July to LAxardal: